It was Sunday, and being the confirmed atheist I am, I was working; but being just as confirmed in my indolence as my lack of religious faith, I was working about as not very hard as I could get away with, and with a large cup of cold-brew coffee and crushed ice to hand, in case of emergencies. But I kept looking out of my office windows. The sun was gloriously bright, and there was an equally glorious breeze coming off the lake… or at least there was, when I had breakfast out on the deck a bit earlier. That breeze was calling my name, and adding, “In a couple of months you’ll be starting up the snow-blower again, make the most of those days you can’t actually walk across the surface of the lake.” Almost without conscious thought, I found myself packing up my essentials and heading out of my sweltering little room, and down the stairs to the large, sliding glass door, that leads out onto the deck. About half-way down the stairs, just passed the cats’ trays (independentclause—seven cats, their trays [or boxes since I am now Canadian], did I put the apostrophe in the right place? I’m not getting the APA manual out again today), I began thinking, “These essentials are bloody heavy. Just what have I got in this bag?” 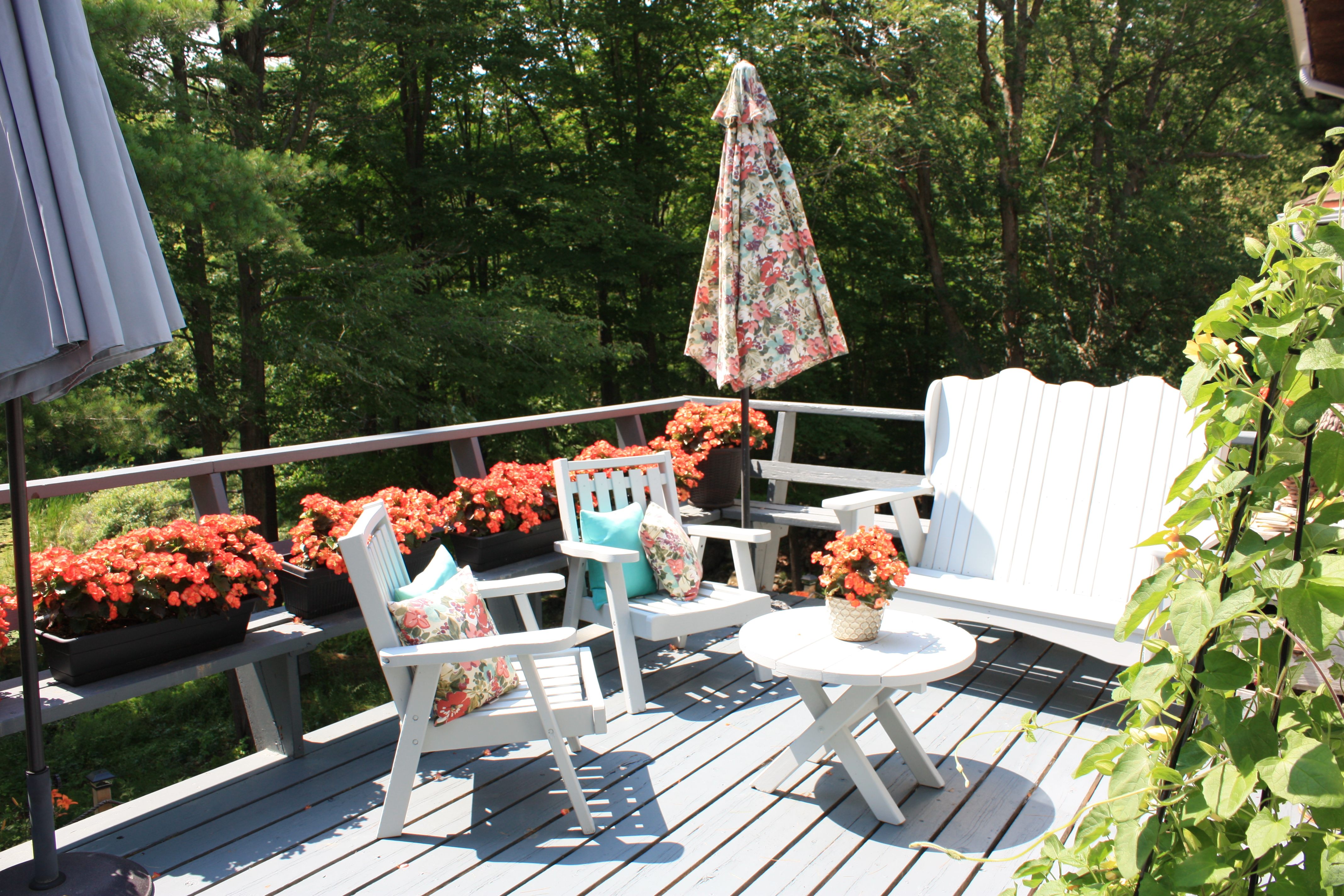 The deck always looks great after She-who-must-be-obeyed has worked her summertime magic. This was looking promising, and as I looked out over the deck rail and down to the lake, it was looking even more so. 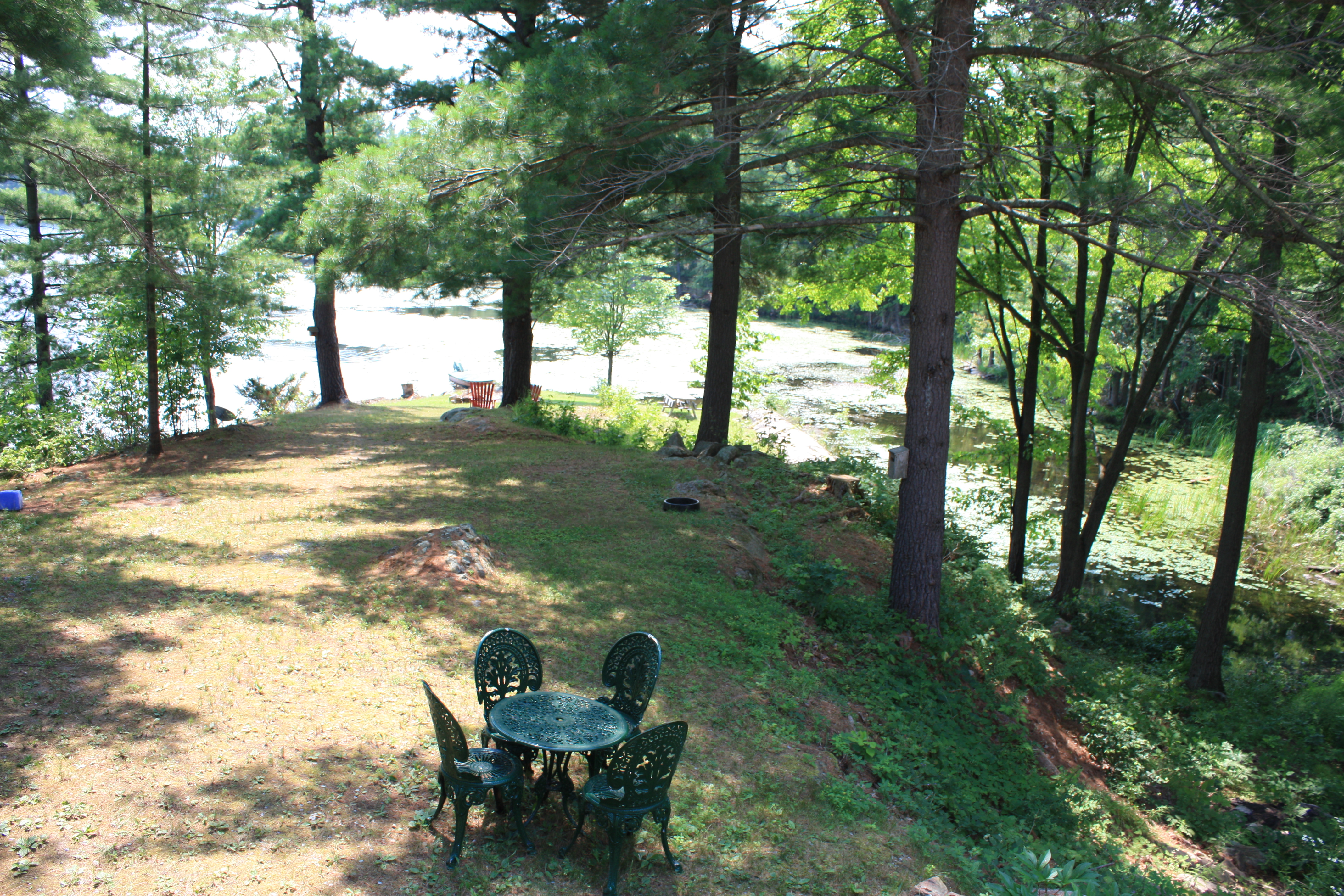 If you look down toward the water, you’ll see a couple of red Adirondack chairs, just to the left of center, hiding in the shade of a tree. If you ever stay with us, this is where you should have your morning coffee, and an evening single malt scotch as the sun goes down. I love this place.

I’m waiting for the hand of fate to tap me on the shoulder one day, and a voice will say, “Sorry old son, but you were never meant to be lucky enough to have this life. We had something far more miserable in mind for you. Come along now…” Until then however, you’ll likely find me, morning and evening, in one of those red chairs. 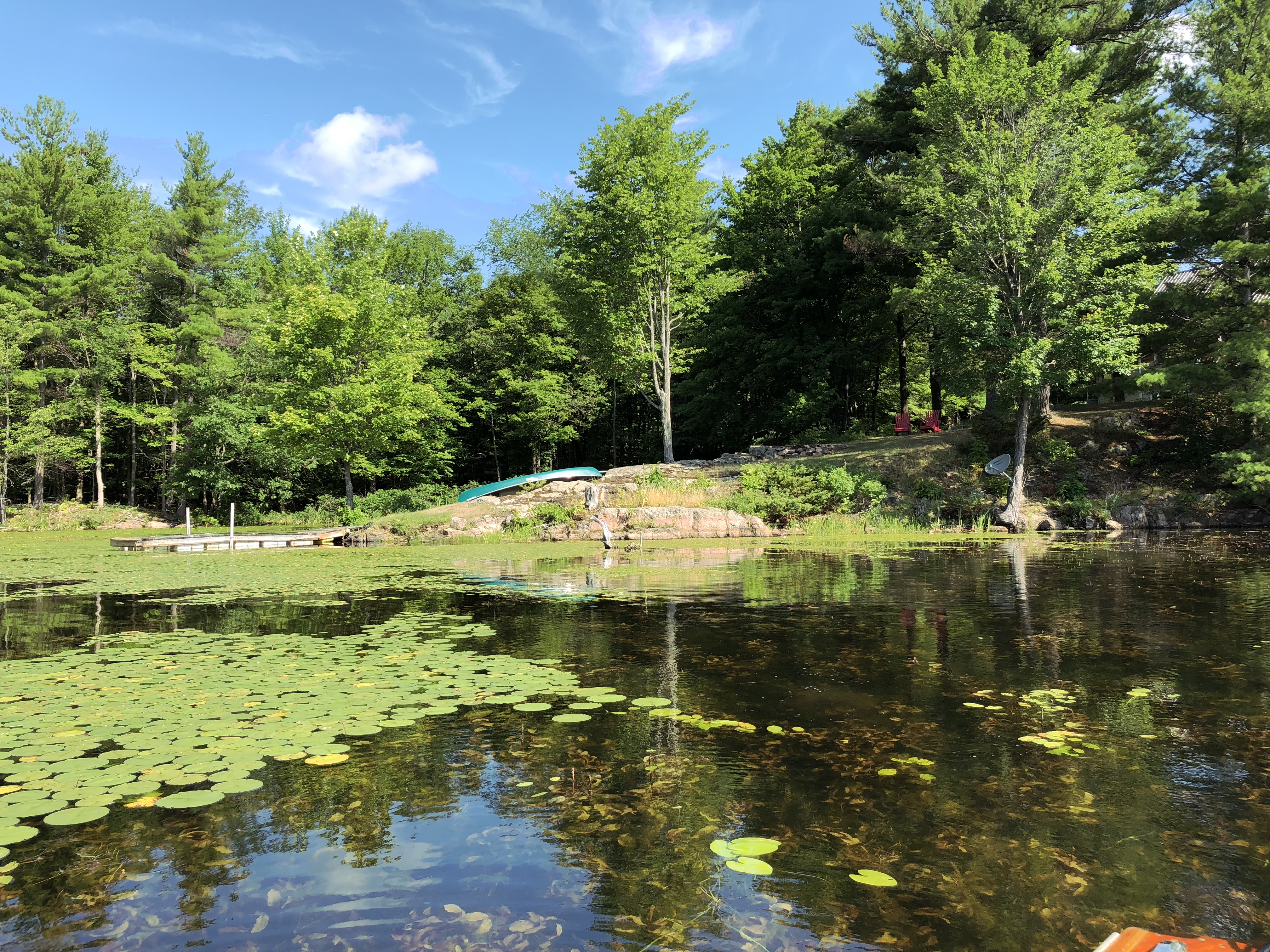 Those same red chairs (upper right quarter), as viewed from our boat, making a quick escape across the lake toward… 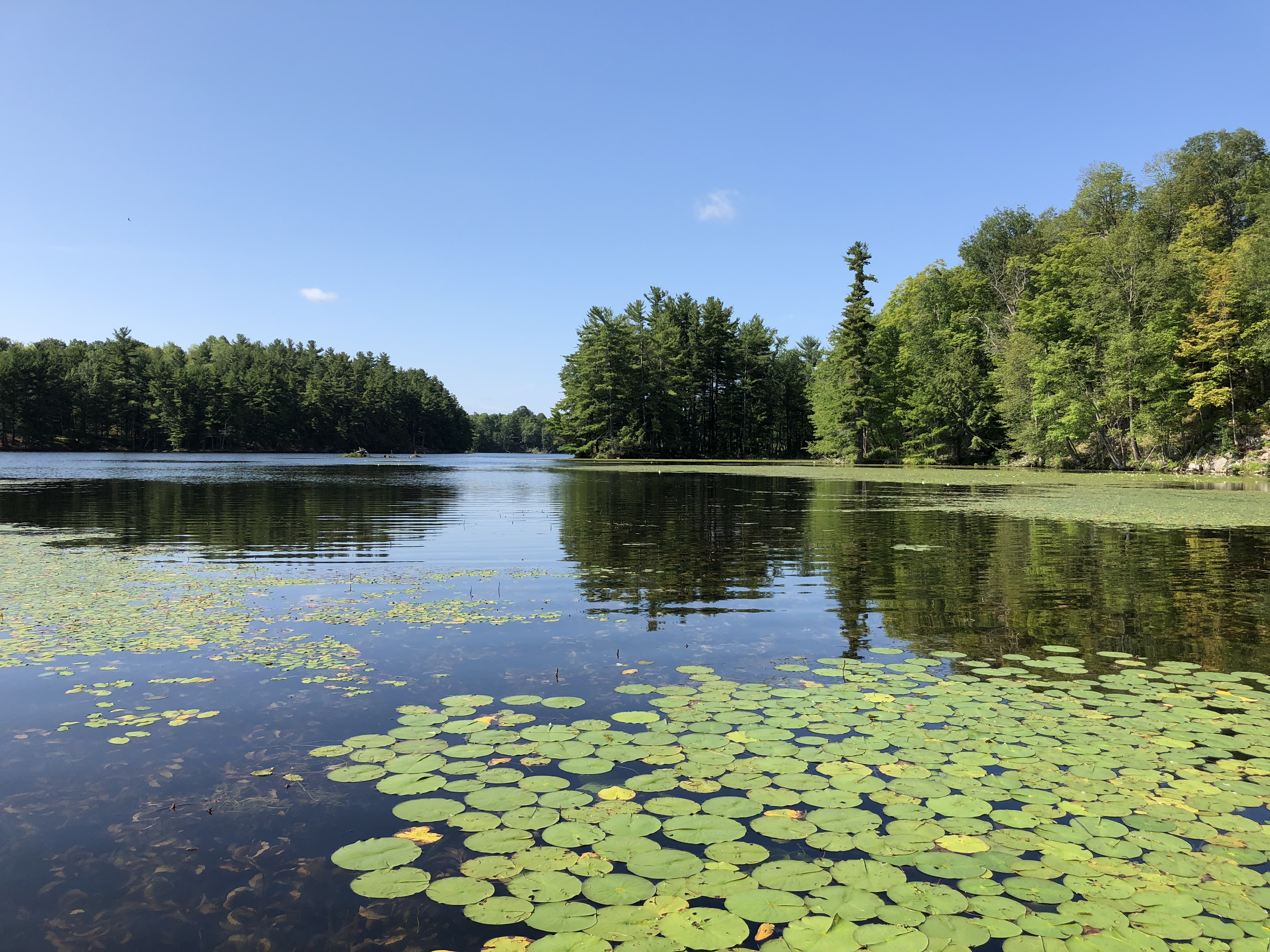 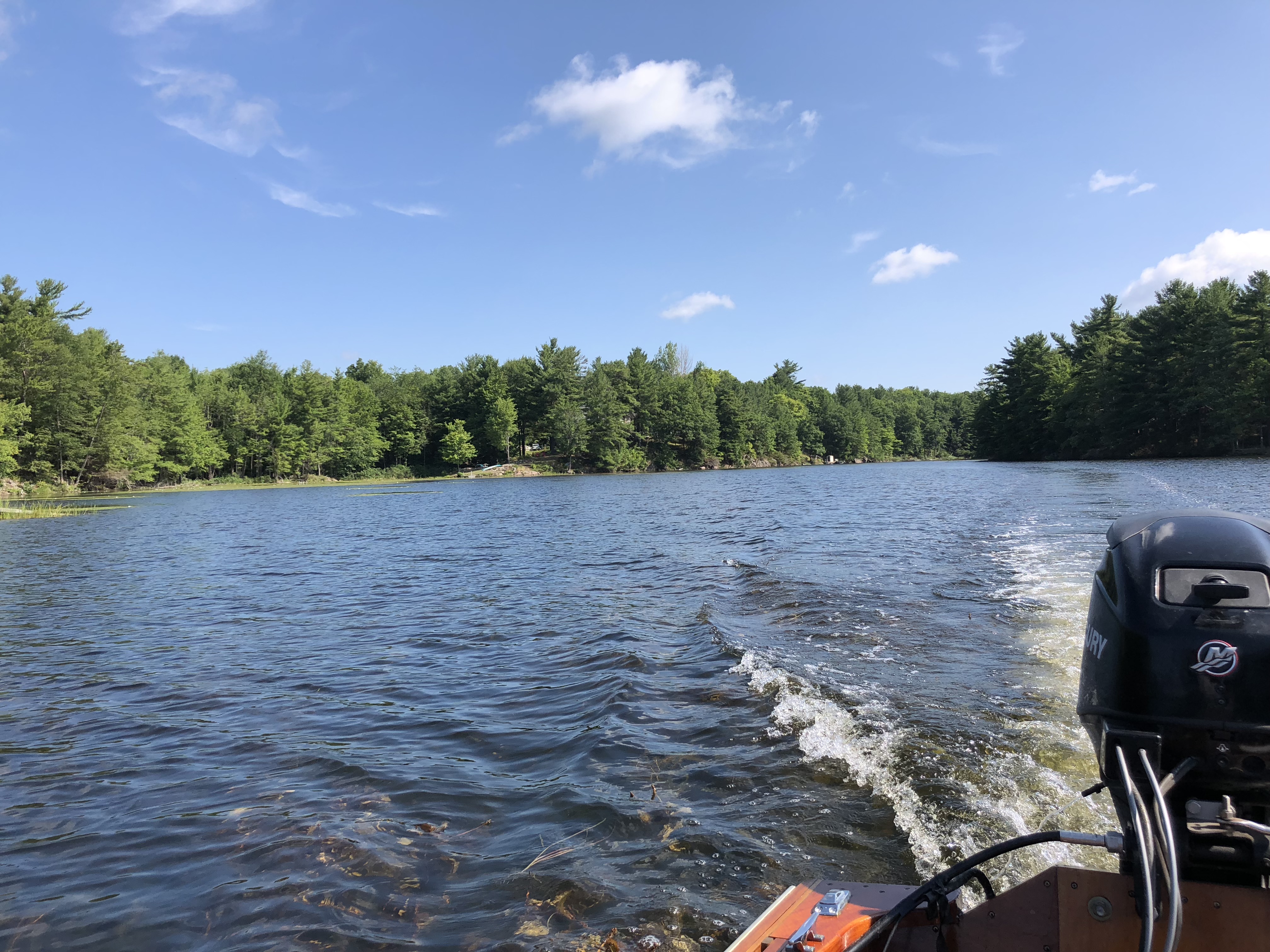 But It Wasn’t Meant To Be…

I had assignments to write for the fall term, and summer course papers to mark, and I had carried my essentials out to the open air to get the job done. But what exactly were those essentials, and how come they weighed so much? 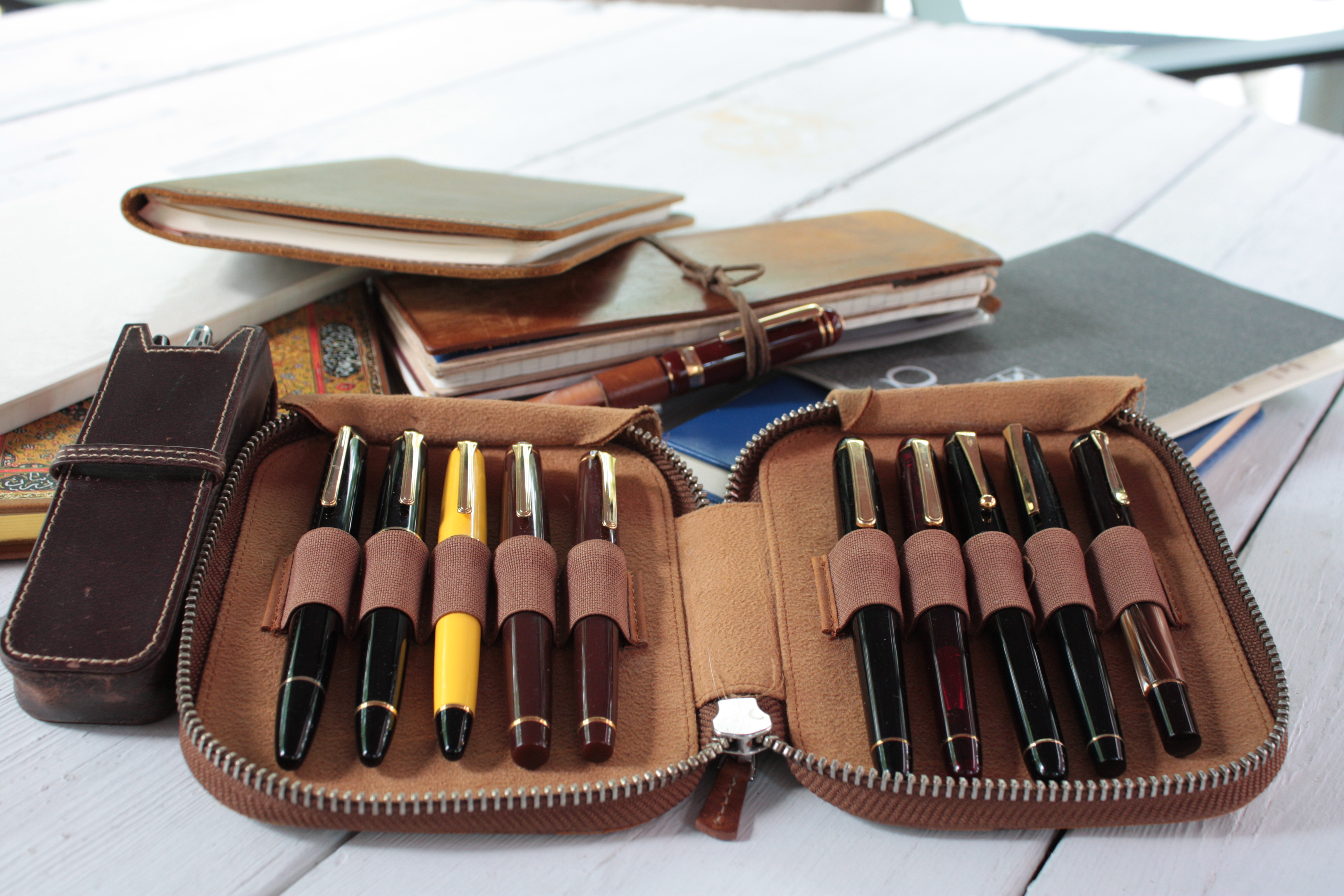 Because There Were a Lot of Essentials.

To start with, there were six notebooks/journals, that represented much of the weight. From the left of the picture above, these were…

A Midori MD A5, lined notebook, for my personal notes; thoughts; ideas for assignments; and course lectures, that sort of thing. I like the MD paper, but sometimes, their smooth coating can be just a bit too smooth for some of my favorite nibs—it makes my Waterman Carène skip occasionally. A Peter Pauper Press (PPP) Inc., Golden Splendour hardcover journal, lined, and a touch bigger than standard A5. I like keeping quotations and writing my own poetry in this. The poetry usually ends up as messages I tuck into my wife’s luggage for when she goes away to conferences, or messages in anniversary, birthday and Christmas cards. Because the standard stuff is just never sloppy enough is it? At least mine is sloppy, with a personal touch. The paper in the PPP books is also my absolute (non-Tomoe River notebook) favorite. Nothing skips in these books, nothing bleeds or shows through, feathering is minimal, and drying time is excellent. Then there’s a Rhodia Heritage Notebook (A5, lined) in the leather journal cover. I keep this for general notes; meetings; instructions from my academic supervisor and committee… stuff that doesn’t usually make any sense when I get back home to actually read it. 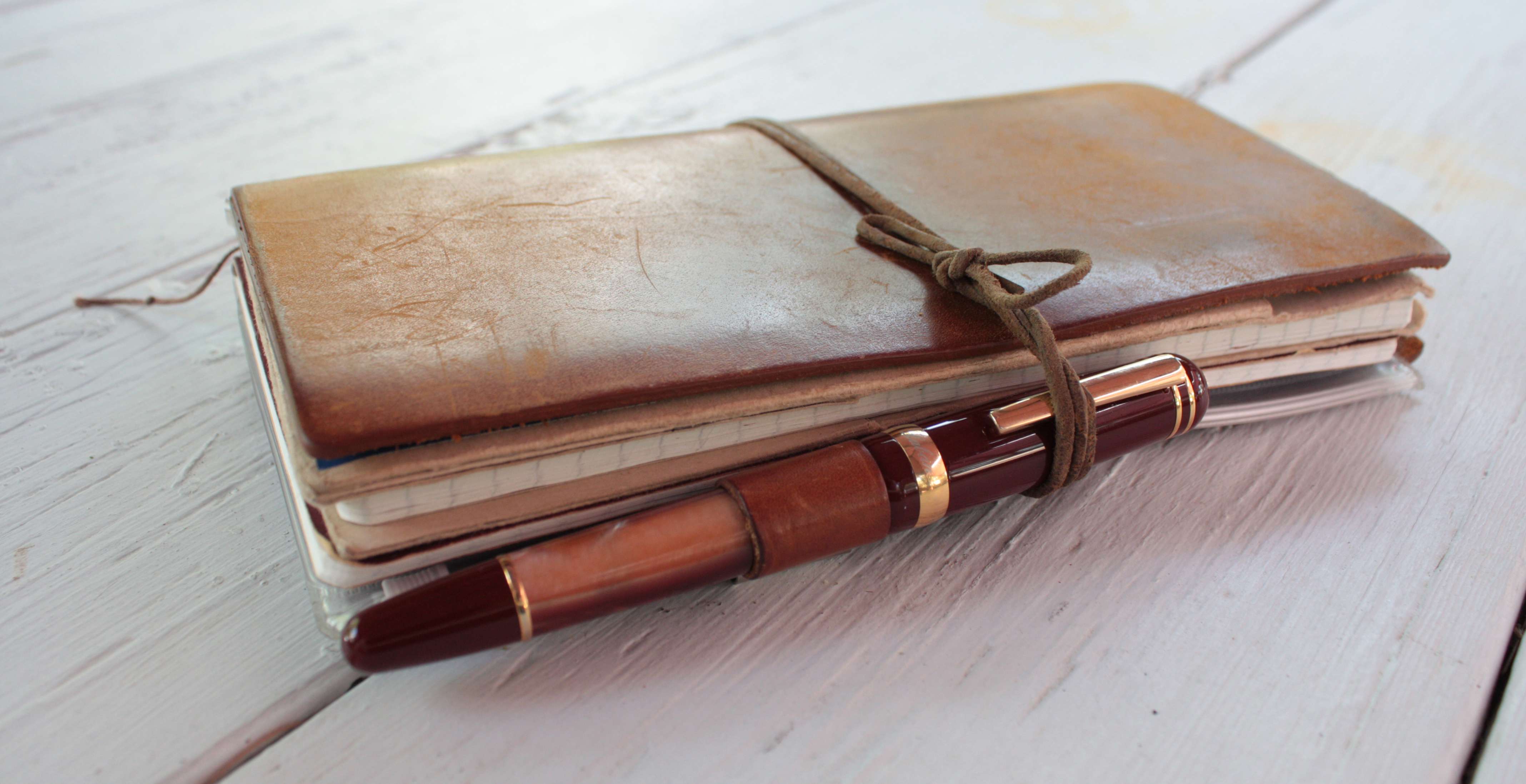 Of course, I don’t go anywhere without my Traveller’s Notebook, stuffed full of amazing, lightweight (52gsm) Tomoe River inserts; a homemade card folder; a card holder; and a zippered wallet. The leather pen clip has stretched over time, and now any pen smaller than the particularly large Laban 325 (above), just falls straight out. And after I kicked a $400 fountain pen across a mall car park, I decided to take precautions.

The last two books are a grey Queen’s University notebook, with rather cheap, but usable paper, and pages which are neatly detachable via fine perforations along the spine. This makes it ideal for notes to give to students; faculty; my kids; or anybody else who’s just going to screw them up and ignore whatever I’ve got to say. It saves me the energy of ranting. The last of the books is my blue Ravenclaw  (Harry Potter) notebook. My youngest daughter and I bought a pair of notebooks (she got Slytherin), at the Harry Potter store at King’s Cross station (Platform 9¾ naturally) in London, UK.

It’s a nice enough notebook, but I don’t think the manufacturer’s were too concerned with fountain pen friendliness and paper quality when they started producing these, if you get my drift.

The essentials are carried in two pen cases, plus, of course, the Laban attached to the Traveller’s Notebook. The first case is a nice, leather, two-pen case by Franklin-Christoph, that I picked up at the Fountain Pen Hospital in New York. This is a great case, and easily holds three of my favorite metal pens… 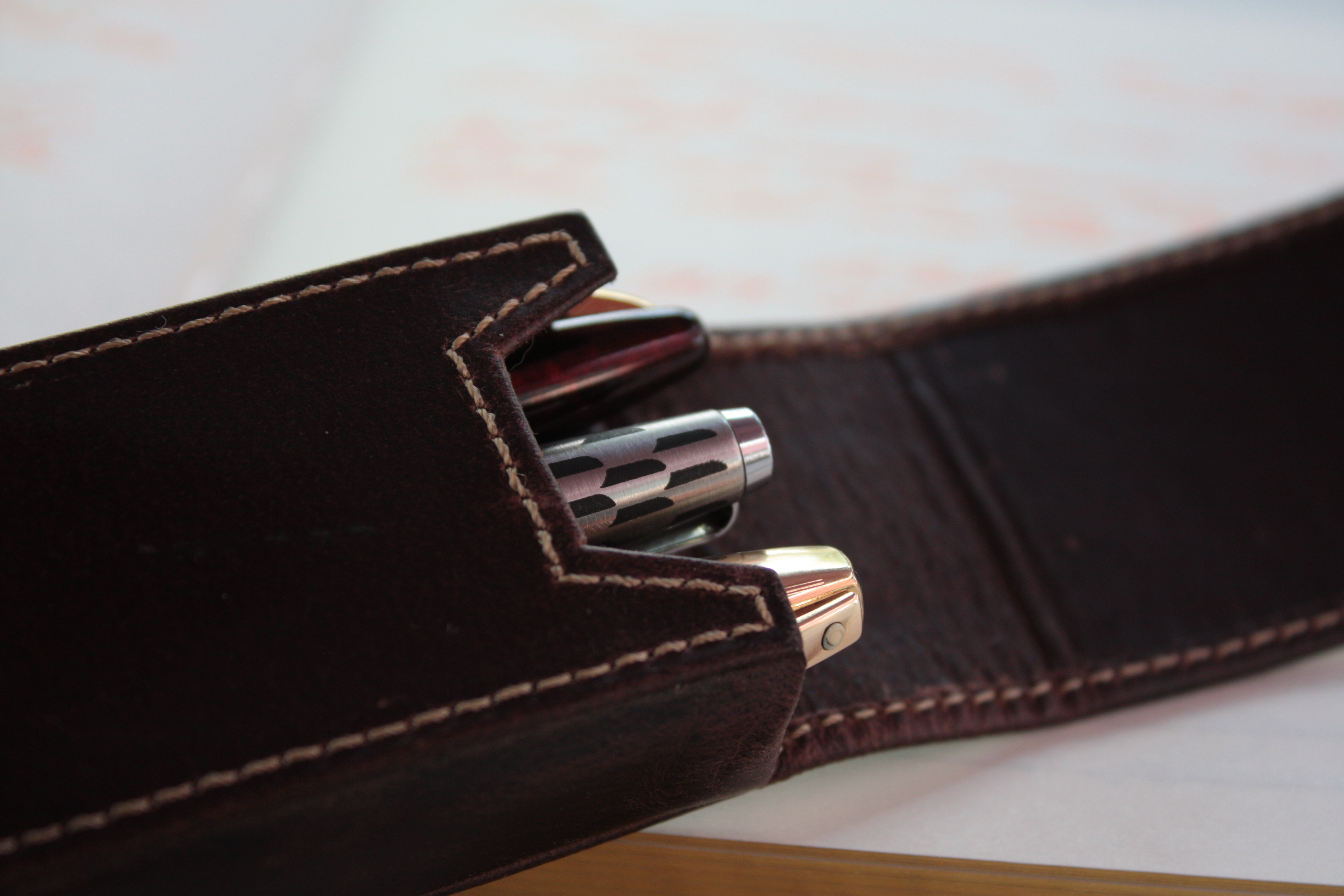 These are must carry pens for me, for a number of reasons… 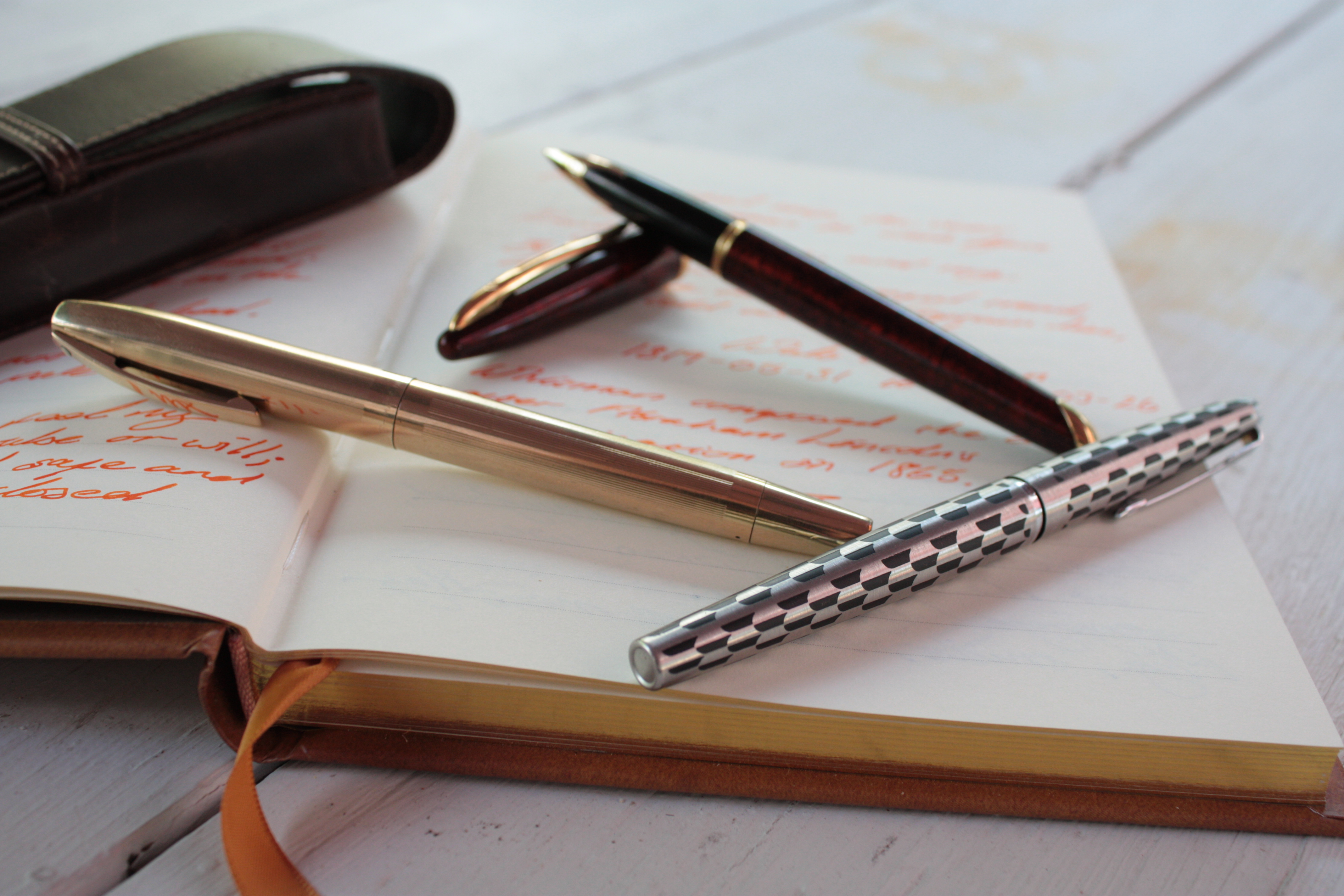 On the left, in the foreground, is my 23K gold-filled, Sheaffer Imperial Triumph (c1961), with a beautiful, inlaid 14K gold nib, and filled with The Pen Addict/Robert Oster Fire on Fire orange ink. To the right is a rather striking Parker 45 given to me by my mother before she died, in the Harlequin Dark Shield pattern, with a newly-added 14K gold, hooded nib. This is filled with a nice purple that is actually 50/50 Monteverde Malibu Blue, and Monteverde Purple Reign inks (more on that at a later date). The last of these three pens has one of the best nibs I have ever encountered on a fountain pen… 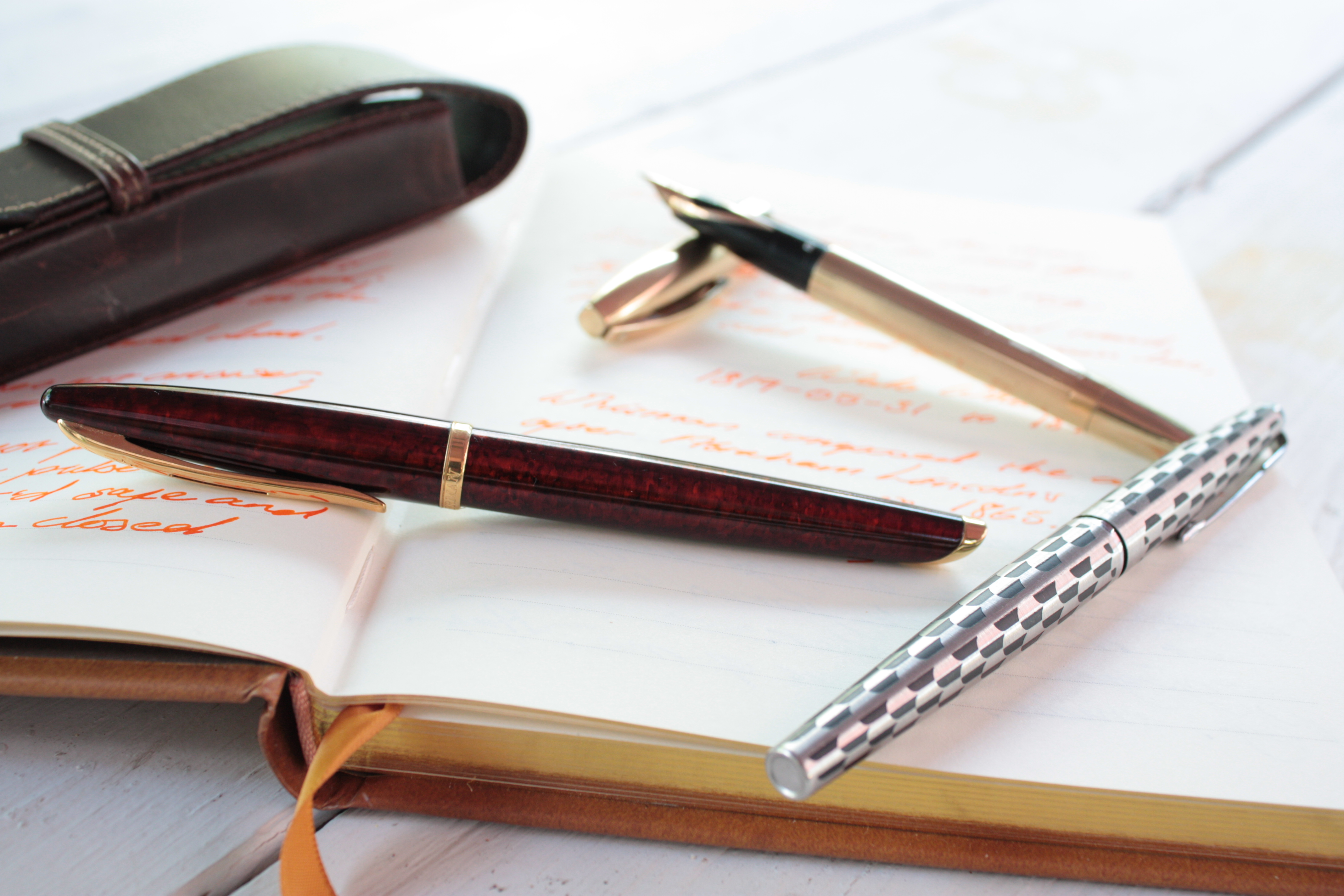 The Waterman Carène in Marine Amber, with an inlaid, 18K gold, fine nib (bottom left in the picture above), is simply gorgeous both to look at and to use. I keep it inked (mostly) with Pelikan 4001 Brilliant Brown, and the two are an amazing match.

This pen passes my Zombie Apocalypse Test—what would you snatch up and load into your rucksack as you lead your family to safety, zombies banging on the doors and windows? Well, after the .308 and .458 rifles; the .44 magnum pistol; ammunition; first-aid kits; crossbows and bolts; water; tinned food; flares; hand axes; clothes; fuel cans; seven cats; cat food; and their favorite toys, it would be this pen… and the other two… and the next ten… and some ink… and my notebooks… it’s a big rucksack (possibly designed by the same people who worked on Dr. Who’s T.A.R.D.I.S.*). 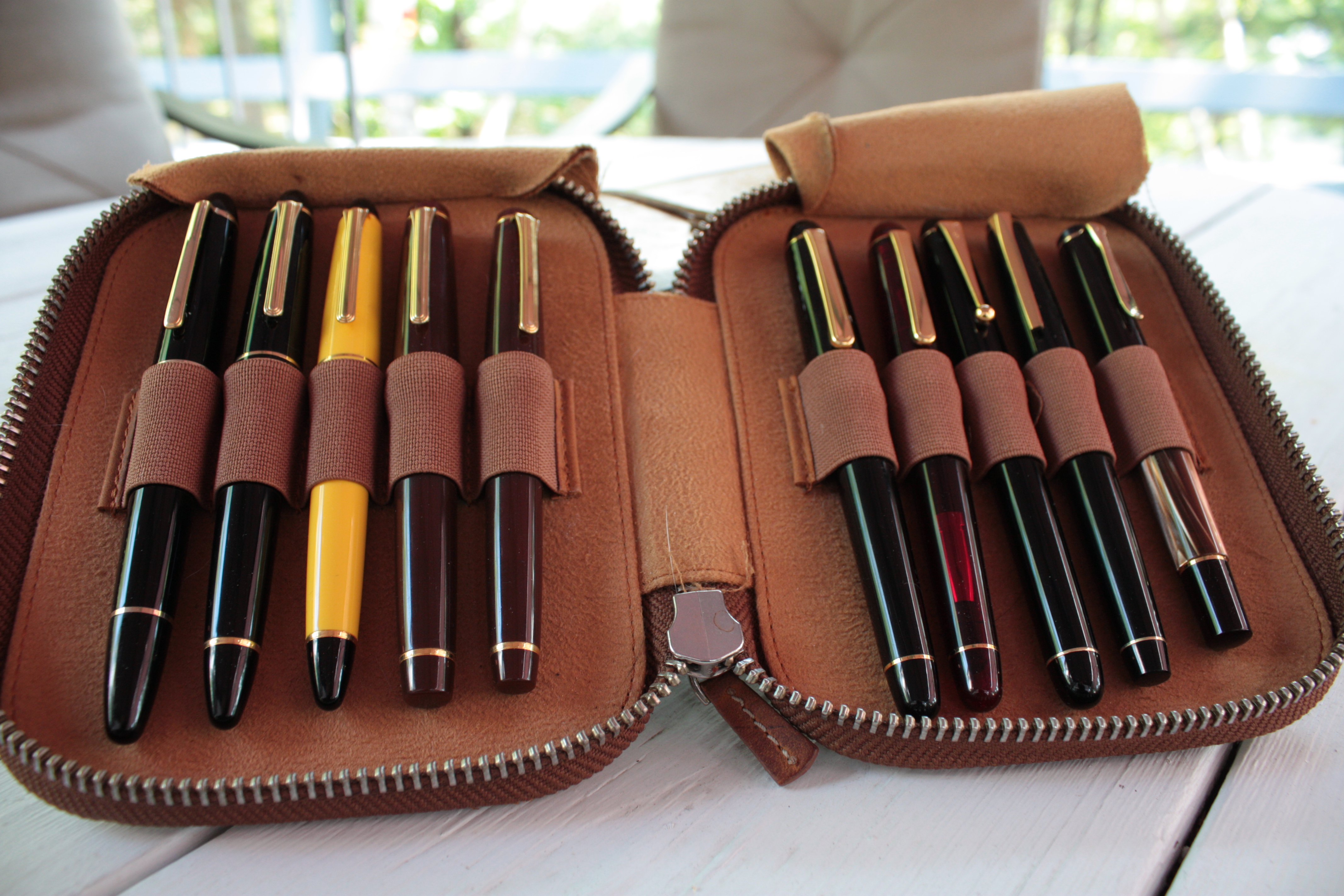 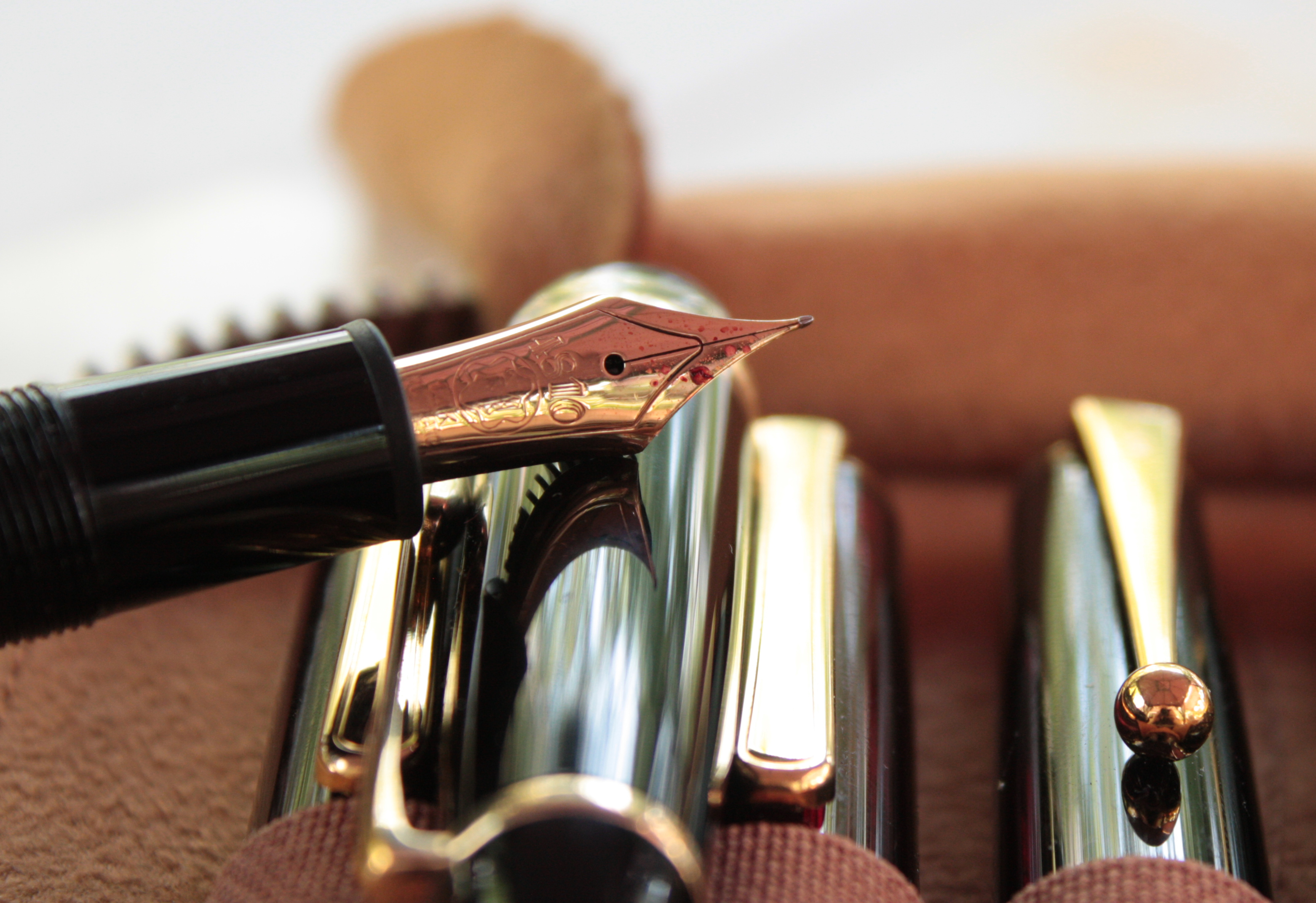 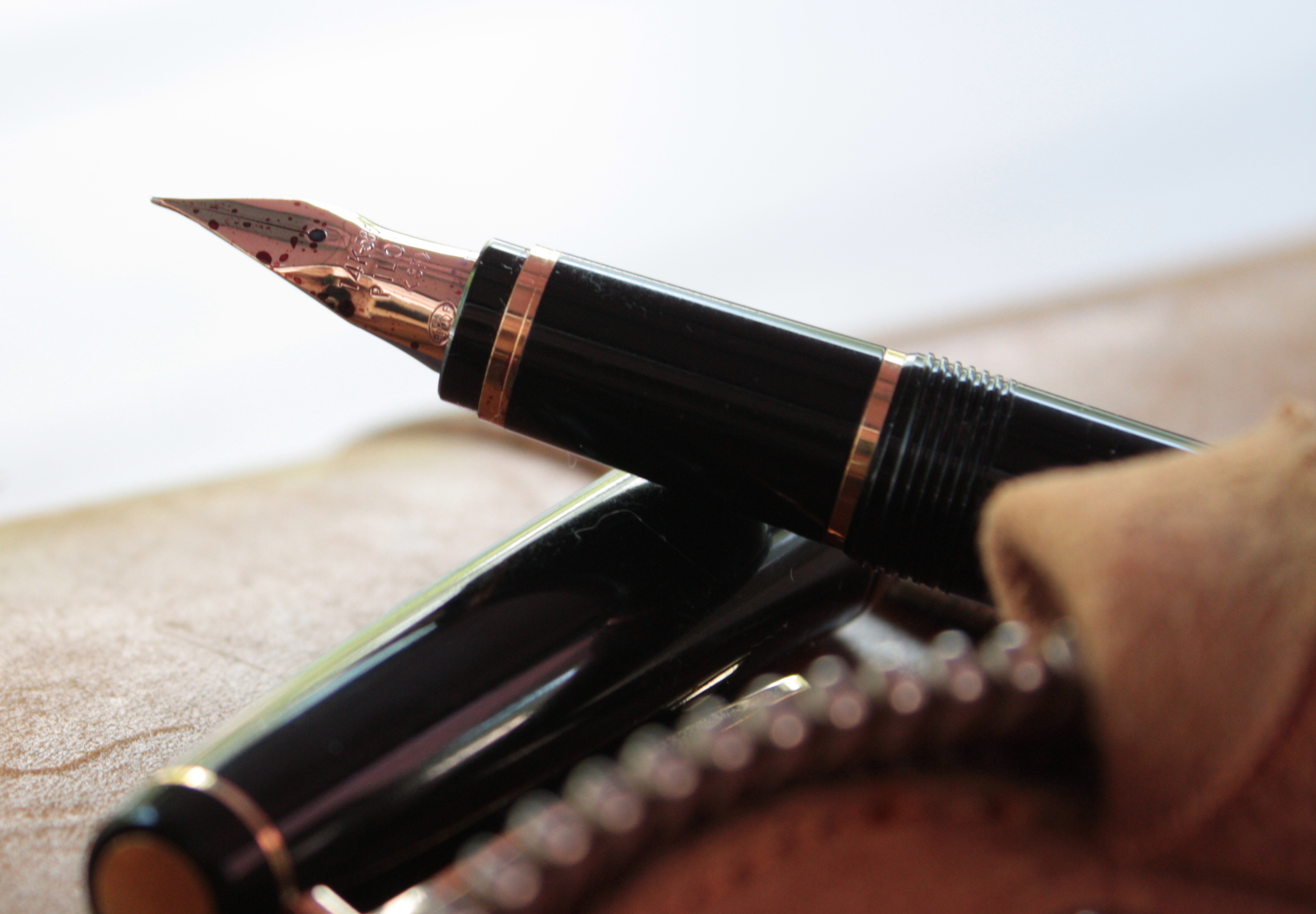 There is something about this nib that some people love and others loathe. I definitely fall into the Falcon Love team. The Pilot Falcon is currently inked with Kyo No Oto Adzukiiro (Red Bean) ink.

The last of the pens, and far from the least, is the little Pelikan M200 Classic in the brown marbled finish. This pen has a simply wonderful 14K gold, Pelikan M400 fine nib, and is inked with Montblanc Toffee Brown ink. 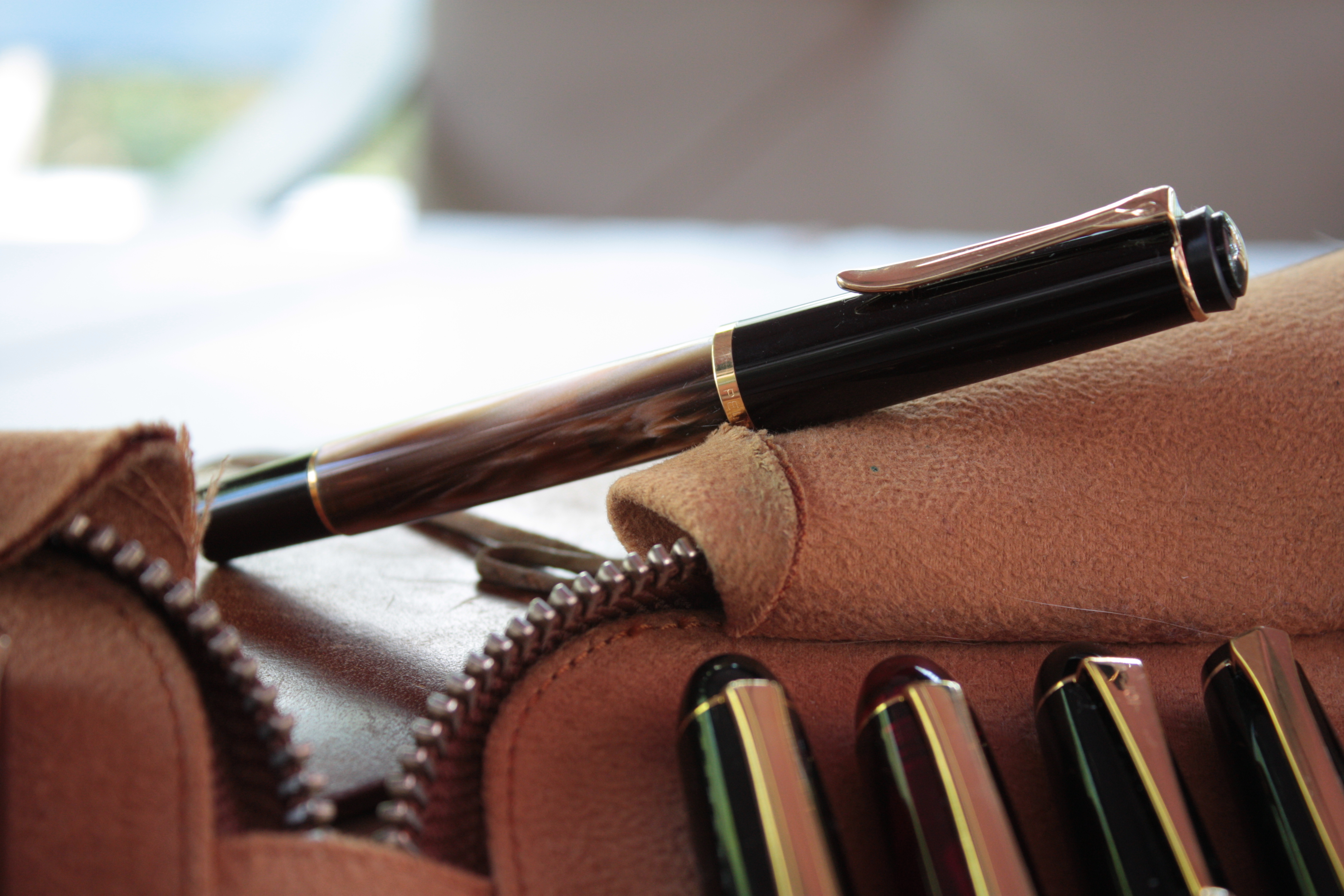 I find myself reaching for this pen more and more frequently. Despite its’ size, the M200 Classic is extremely comfortable for my large hands, and that nib provides a writing experience that always brings a smile to my jaded features. In fact, I have been so impressed with this little pen, that a slightly larger model is winging its way across the Atlantic as I type this post.

That may have been the last of the pens, but the Galen Leather 10-pen case in Crazy Horse Brown is also a must-carry. 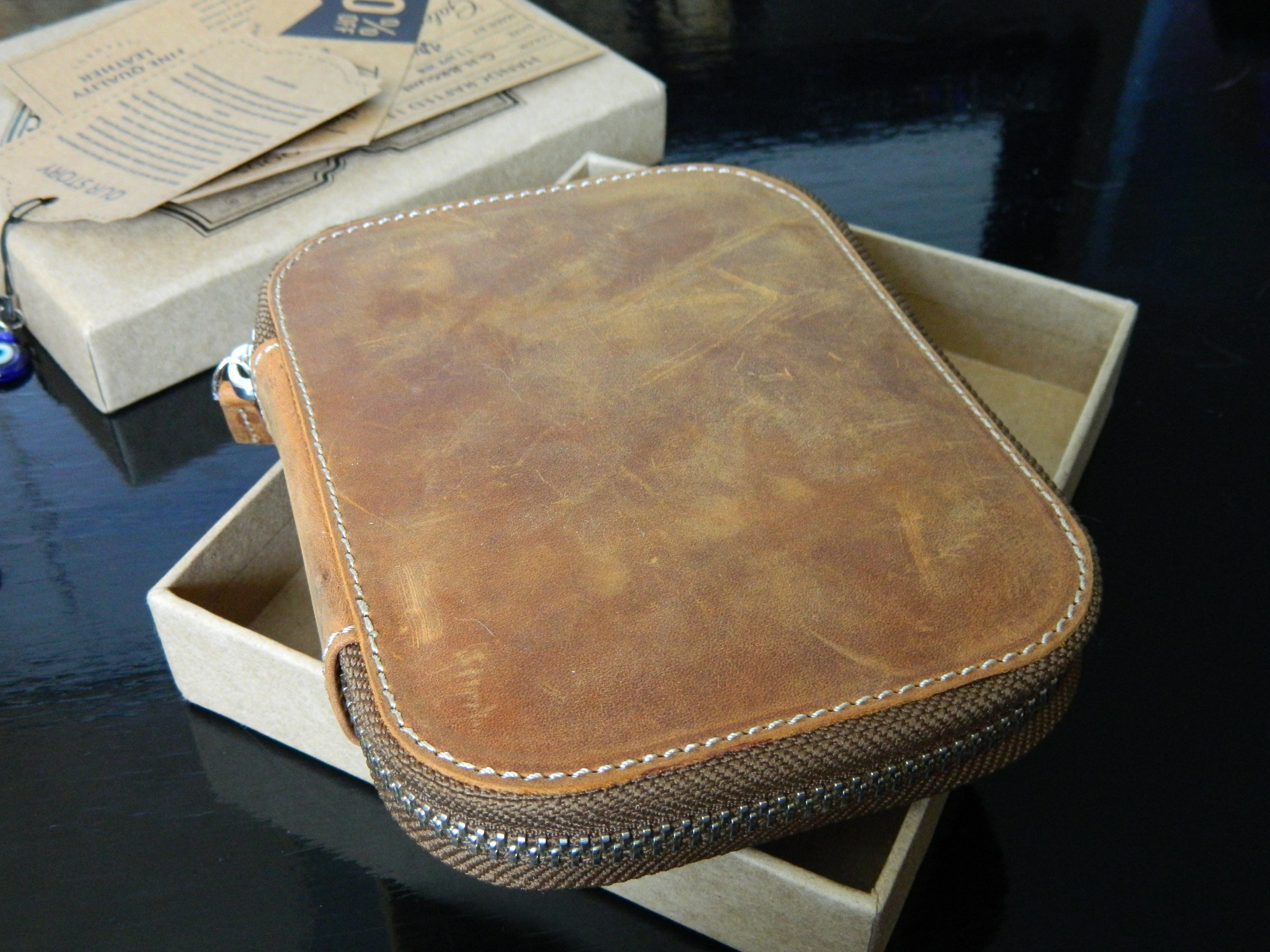 This is a great pen case, and I have used it constantly since I picked it up about a year ago, but it has its flaws. The most onerous being the constant fraying of the leather flaps which cover the pens inside the case. I have found that, when the flaps have frayed significantly, the edges are prone to getting caught in the zipper of the case. This isn’t much of a problem, but it does mean that I have to trim the frayed edges down occasionally; if only to avoid the leather jacket with tassels look.

So, there you have it, my essential daily carry. No wonder the bag weighed so much. I really must try to trim this down to some sort of sensible level, or I’ll never outrun the zombie horde (even if all they do is walk); but… all of this is just so, essential!

*Time And Relative Dimensions In Space 🙂

22 thoughts on “Not a Bad Day to Work in the Sunshine, Plus Zombies.”