A little while ago, I was lucky enough to add a Pelikan M200, with a fine M400 14K gold nib, to my pen case… and it has seen pretty much constant use ever since. At the time, I said it was a narrow decision between that, and the larger, but considerably more expensive M600. Also, I was interested in the M600 in Vibrant Orange; but after seeing it in the resin so to speak, I talked myself out of it on the grounds that I wasn’t that keen on the translucent barrel. Instead, I decided on the Souverän M600, in black and red stripes. My high-school German, Pelikan’s marketing materials, and some recent schooling from Deutsche-speaking reader Gregory Johnston (UPDATE: 2021-07-13), tell me that Souverän is German for Sovereign, and that pronunciation is—properly—as follows… Pay-lee-kahn Zoo-fer-rayn (remember the umlaut “ä” over the “a”). It does pi$$ me off not a little when people can’t be bothered to pay some respect to the language of another nation, but that’s another post. Anyway, thank you Gregory Johnston, your message was much appreciated, and so I started some research on the best places for a Canadian buyer to pick up a Pay-lee-kahn Zoo-fer-rayn M-Sechshundert (Zecks-hoon-dairt).

Spoiler Alert: It didn’t turn out to be anywhere near Canada or the U.S.

I’ve heard a number of people tell me that North America gets a poor deal on Pelikan pen prices, but I had no idea just how right they were. A Pelikan Souverän M600, in any of the striped barrel patterns (red, green, or blue), or even the solid black, can be picked up for as little as $310 CAD from Cult Pens in the UK, who don’t charge for international deliveries on orders over about $161 CAD (£100 GBP); and at the date of this post, they’ll throw in a free, Pelikan, leather, single pen case, worth another $60 CAD or thereabouts (UPDATE, 2019-08-04: Cult Pens no longer offer this as a free gift, but the pen itself is on sale with a 10% discount on the prices quoted in this post). That’s a saving of about $140–$180 USD for anybody purchasing in the United States, or a saving of $455–$540 CAD for anybody that might be purchasing that pen from a Canadian retailer. Take a look at the table below, which compares the prices I was looking at…

Please don’t misunderstand, I don’t think for a minute that shops like Pen Chalet, Nibs.com, or Wonder Pens are profiteering over these pens. And as for Laywine’s, they have a store in the pricey designer belt of Toronto retailing, so I’m sure they have to meet some steep overheads, and I have good reason to believe that margins in this business are usually tight and competition is sharp. But honestly, a difference of up to $540 CAD between the UK and Canada, on a mid-range fountain pen? And Cult Pens can still afford to give me free delivery to Ontario, plus other freebies or discounts? Or a difference between the United States and Canada of $200–$300 on the same pen? I really would like to hear an explanation that fully accounts for each of those hard-earned, five-hundred and forty bucks from someone (and I suspect that would probably be Pelikan themselves).

UPDATE, 2019-08-06: The inestimable Laura of Fountain Pen Follies  fame, and from whom I always  learn something worthwhile (in fact, I should have spoken to her before posting really), had the following to say in the comments below, but I thought it was important enough to warrant a correction:

… in the US MSRP prices are set by the US distributor, Chartpak, which allows retailers to offer a maximum 20% discount off MSRP. That’s why prices here are so high. Buying from a US dealer does give you warranty service, and the satisfaction of supporting your favorite dealer. But the unfortunate price increase means most US collectors I know buy at least some of their new Pelikans abroad, as you did. Where there’s a distributor, you have to build in another layer of cost/profit, and that’s not anyone’s fault, but just the reality. Who knows whether any of this will be sustainable, economically, in the future.

Indeed, who knows what the future’s going to bring? And that model would—I surmise—explain the even higher prices in Canada, where the market would be significantly smaller than that of the US, and overheads possibly greater. As a result, costs and prices rise, and distributors would likely be looking for higher margins to make the whole arrangement worthwhile from a business perspective.

I do like to support Canadian businesses, as I’ve said before, but not at a premium of five-hundred-and-fifty bucks per pen! 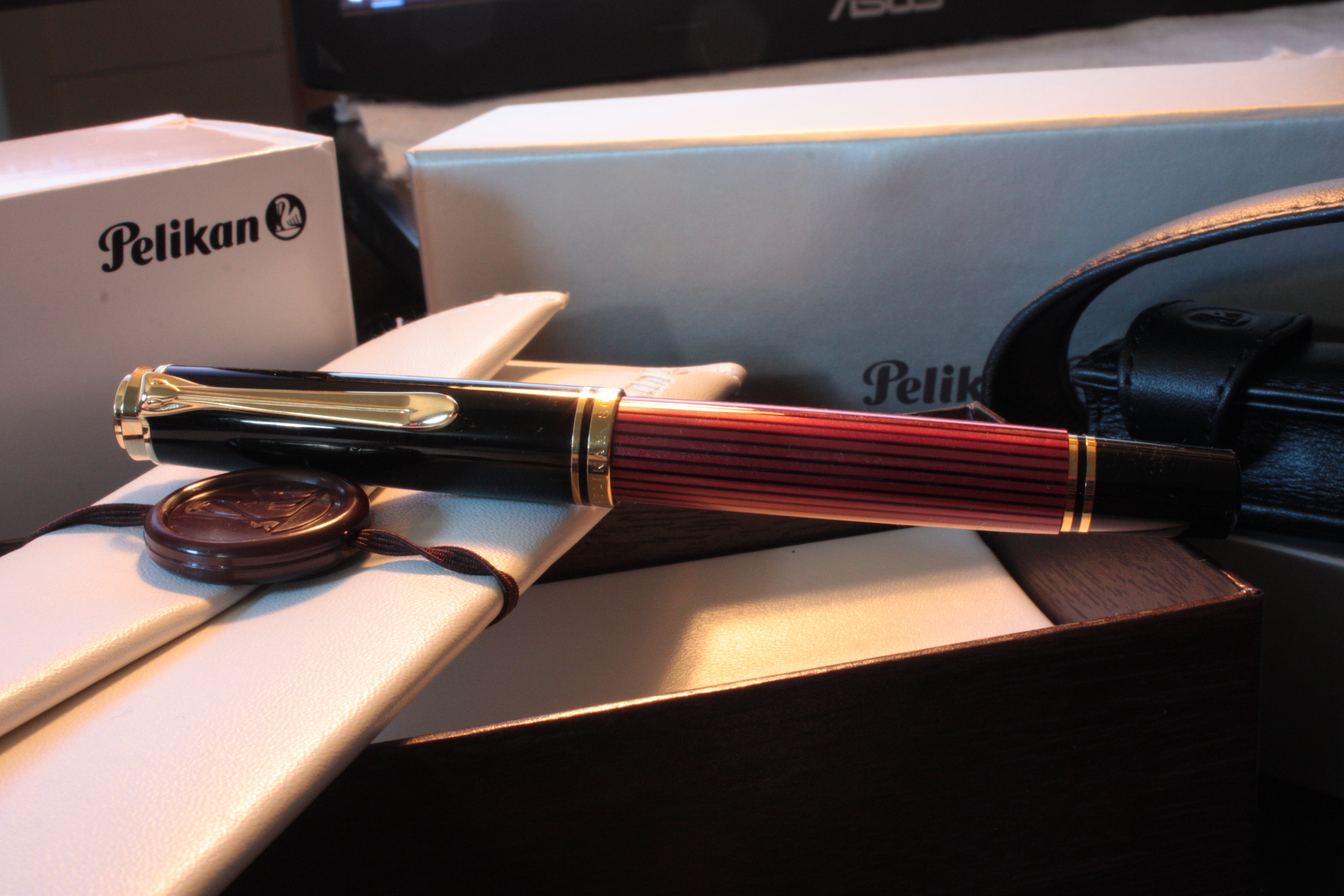 Delivery was a dream, no hold-ups, and the pen arrived a day earlier than estimated. That always makes me very happy—I am about as patient as a pride of lions at feeding time; and I have been there on that one, trust me.

The pen came in a leatherette (fake leather) pouch; wrapped up in an elastic band with a fake seal (plastic) in the center; inside a cardboard box with fake wood-grain patterning, and a lift-off  silver cardboard lid; all of which were inside another cardboard box. OK Pelikan or whoever, if you’d like to offer better value for money in North America, start by revising the packaging. In turn, this would cut the weight down on shipping for every unit sent over here, and help the environment too—just a thought. How many of us just throw these boxes in the recycling, or the garbage, anyway? I know I do. 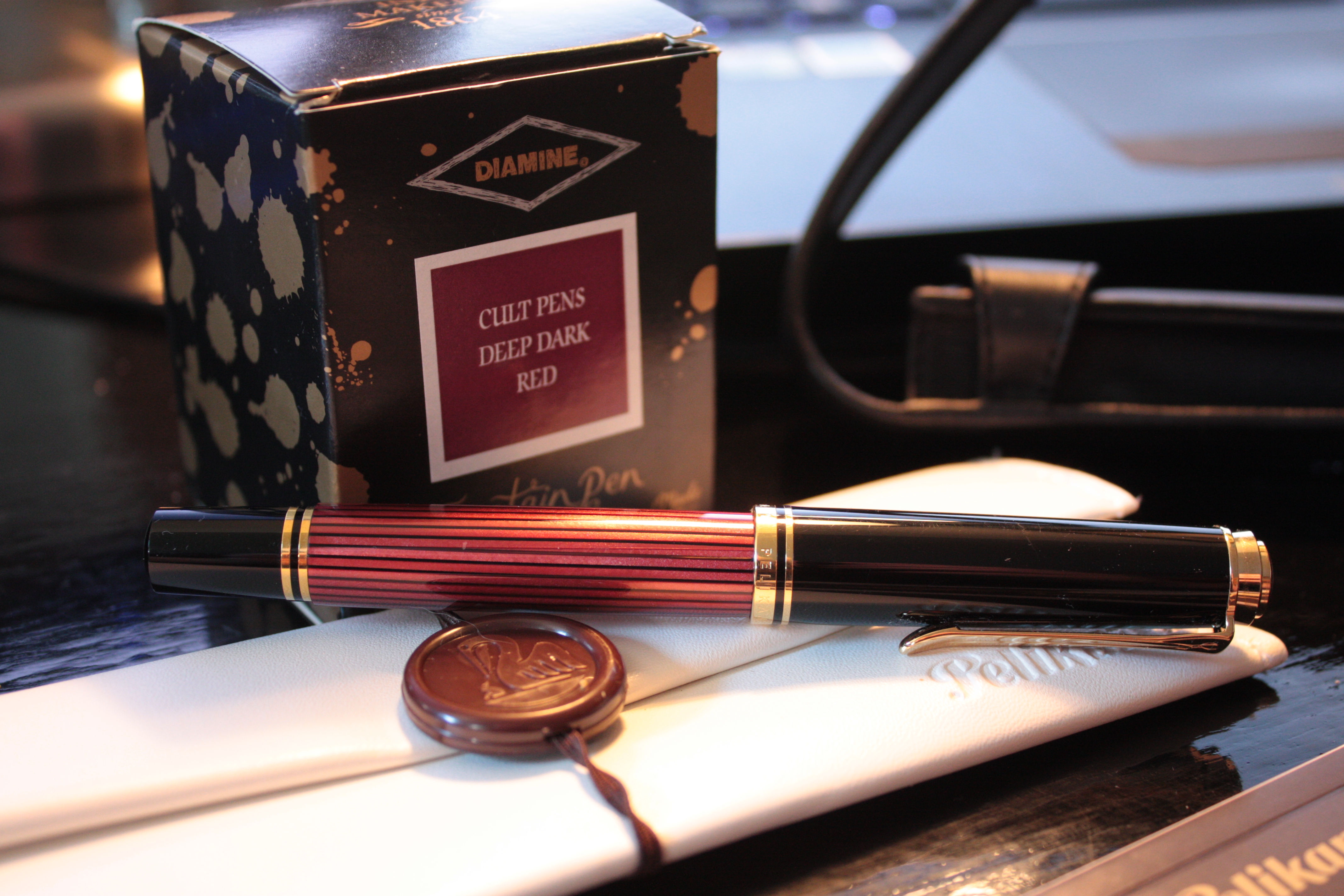 Out of the box(es), the pen was just as stunning as I remembered. 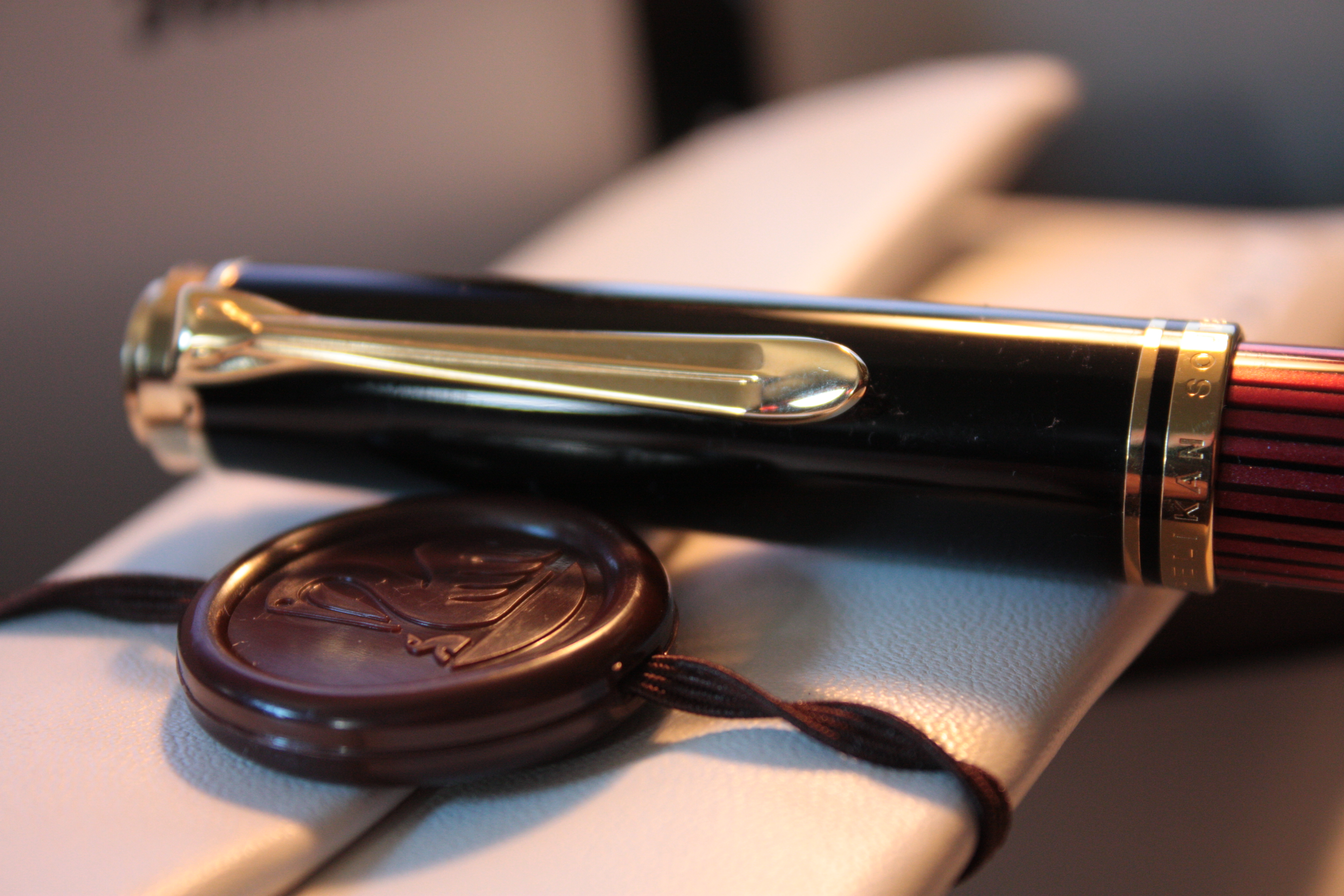 Pelikan make beautiful, classically stylish fountain pens—I’m sure their other pens are just as nice, but I’ve never even looked at those, so I wouldn’t know. The lower cap band is inscribed PELIKAN SOUVERÄN GERMANY, and the clip is Pelikan’s usual, graceful bill-shaped affair, attached to the gold cap badge and logo. 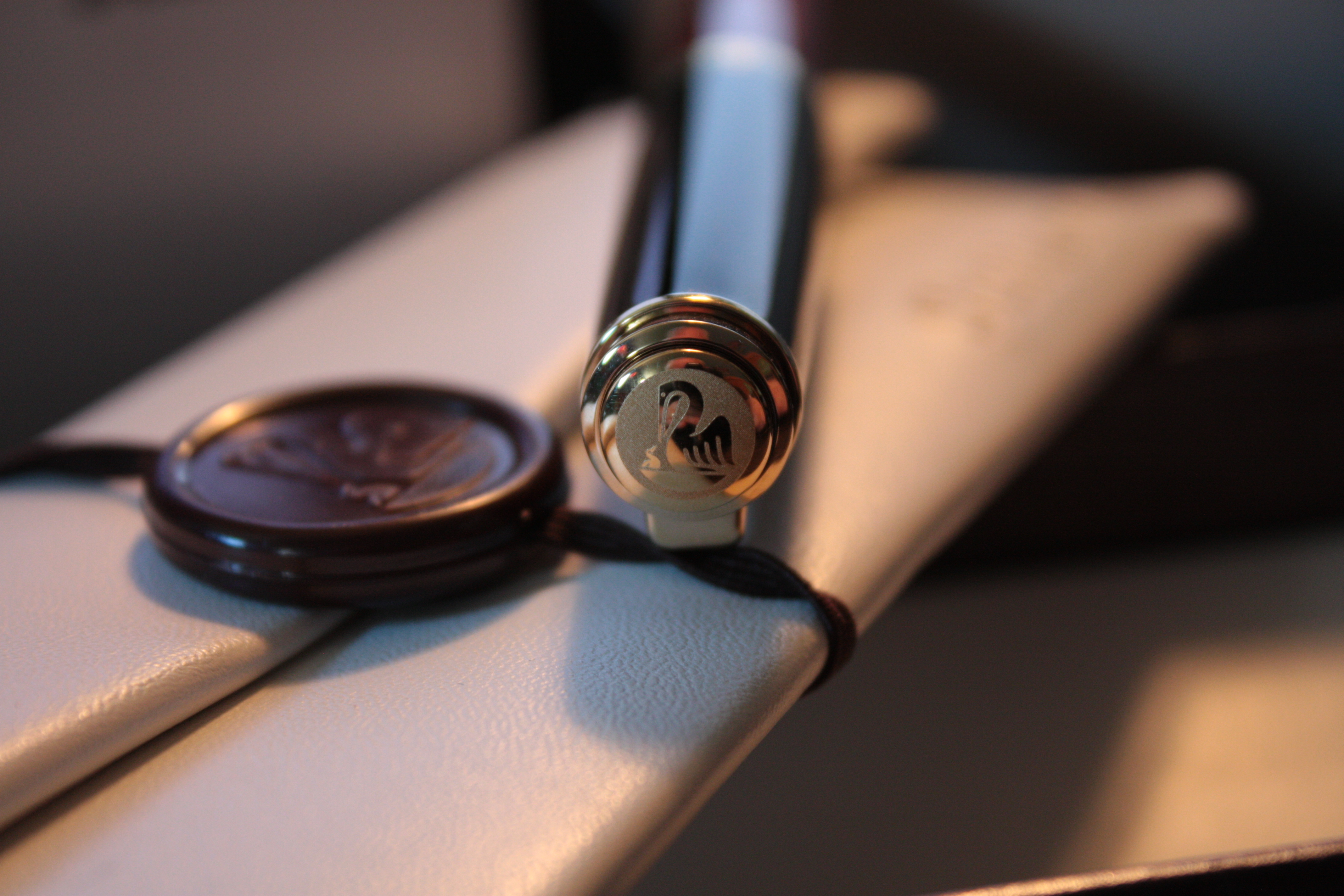 Cute mama bird and chick logo? Chick, sorry, check. Sorry again, that was a bit flippant. One of the things that really appeals to me about Pelikan pens is their attention to detail, and the stylish, tasteful, design aesthetic present in all their models; the Souverän range is the epitome of that ethos. 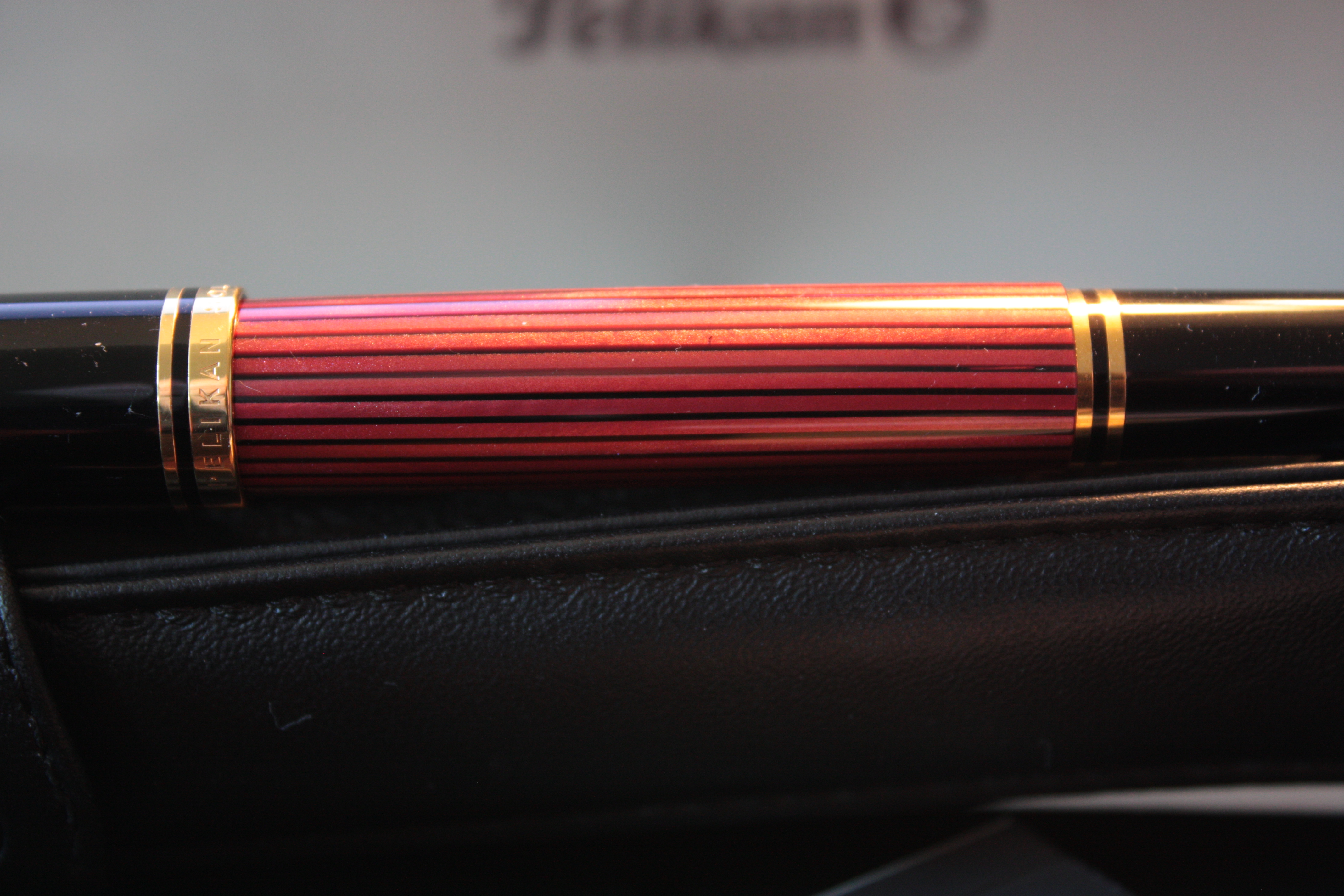 The barrel is a lovely, deep red, which swells to a 12mm diameter in the middle, and tapers down toward the double gold bands at the finial. The M600 uses Pelikan’s beautifully smooth, differentiated piston mechanism (read about it here—I know that’s a bit of a cop-out, but frankly, I’d probably only end up plagiarizing the Pelikan web site anyway). 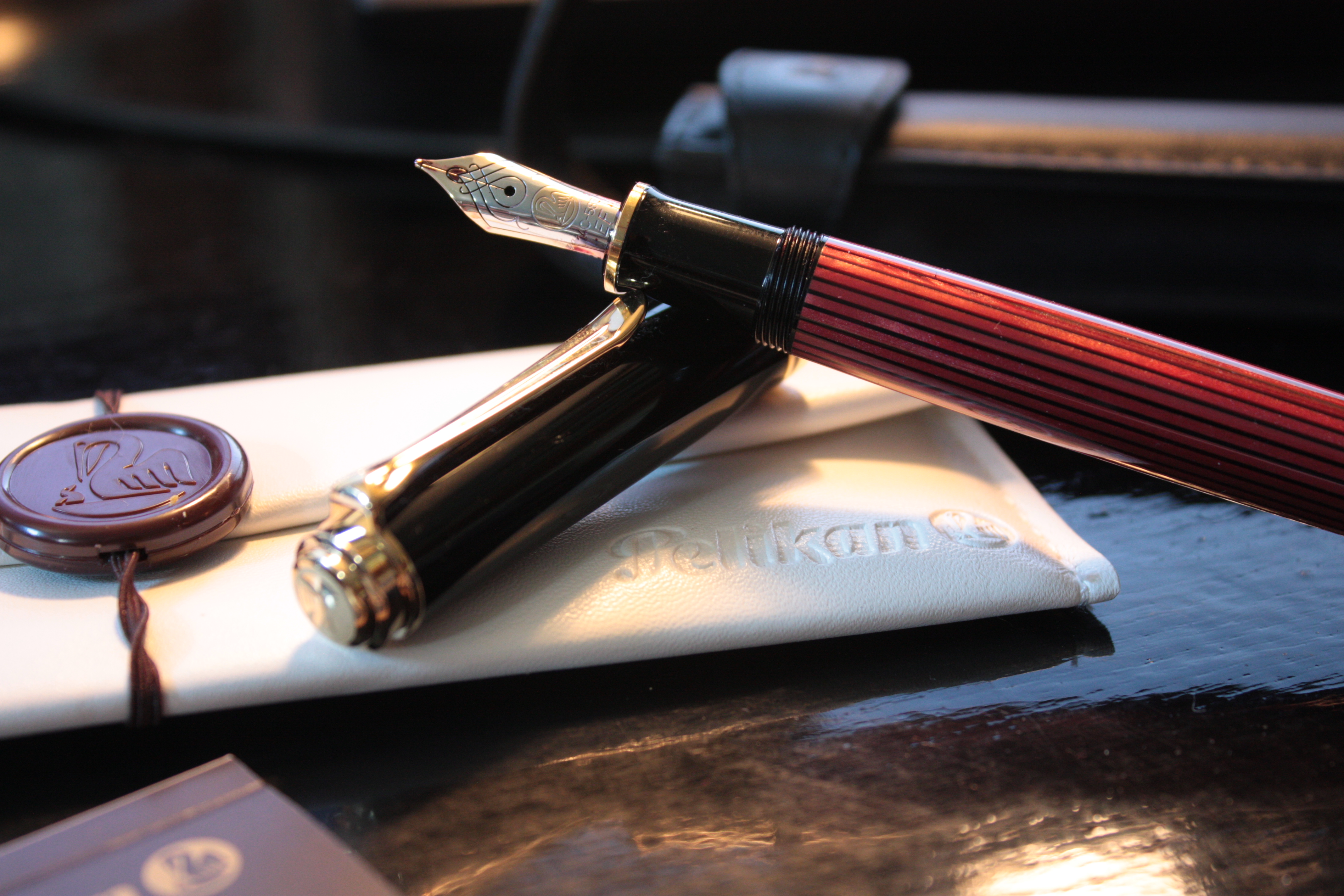 Having mentioned attention to detail, just take in the work on Pelikan’s nibs. 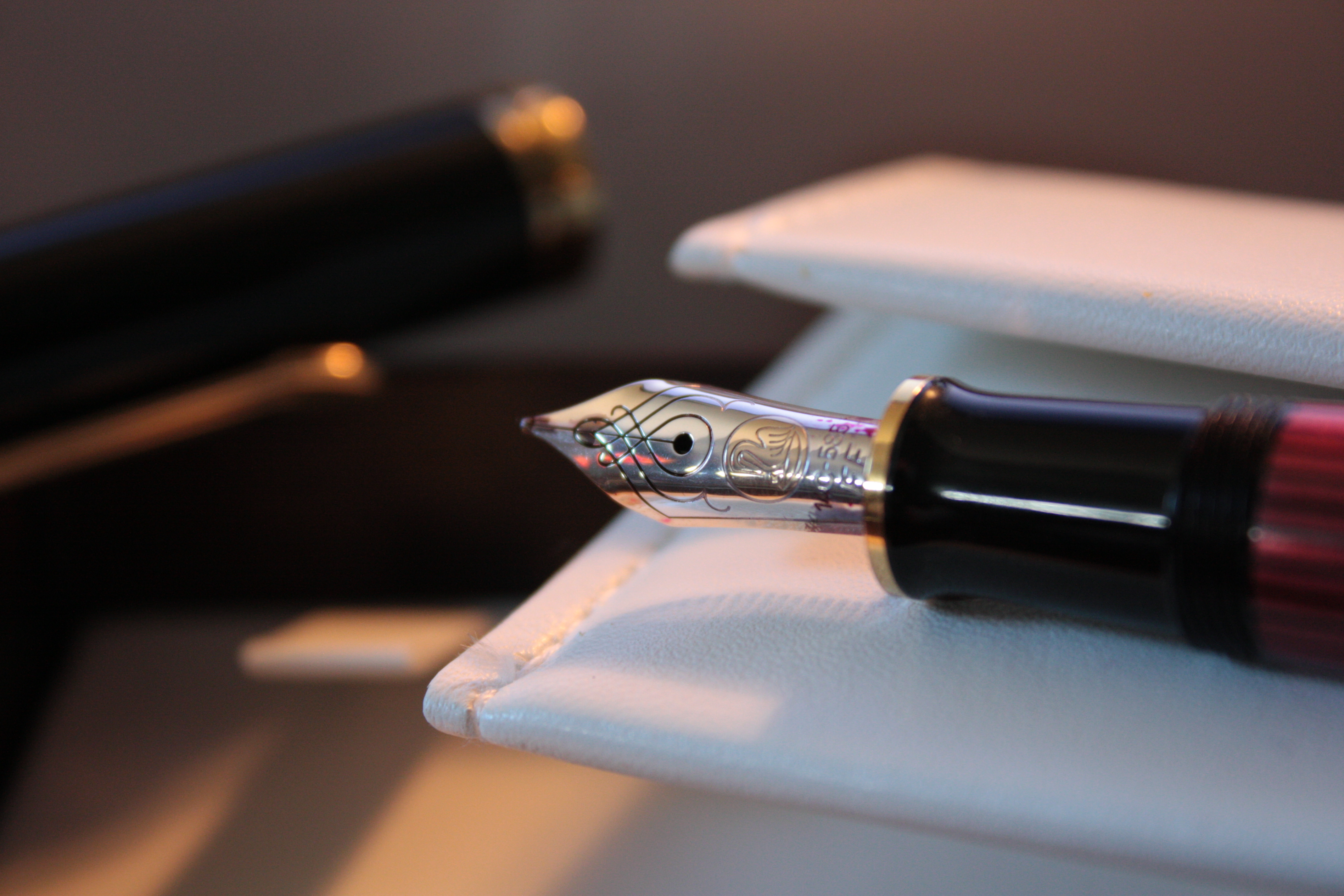 The nib is two-tone (14K gold/rhodium), with an extra-fine tip. Given a nice, free-flowing, wet ink, this could almost be the equivalent of a Japanese (e.g., Pilot or Sailor) medium. The scroll work is, as ever, a delicate, and appropriately flowing pattern, above the golden inset of the Pelikan logo, and the 14K gold, extra-fine, nib classification. 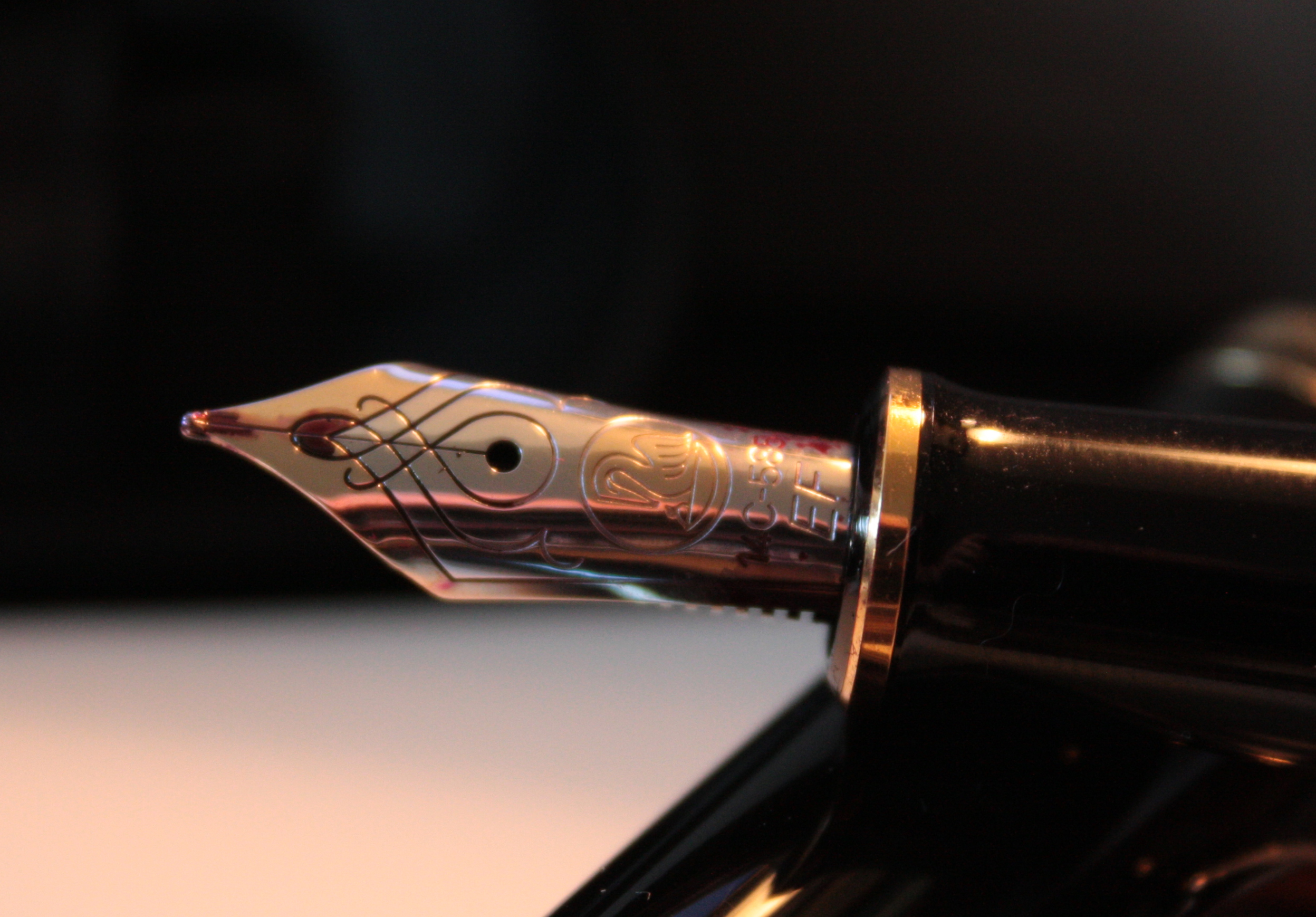 Even the free pen case was pretty cool… 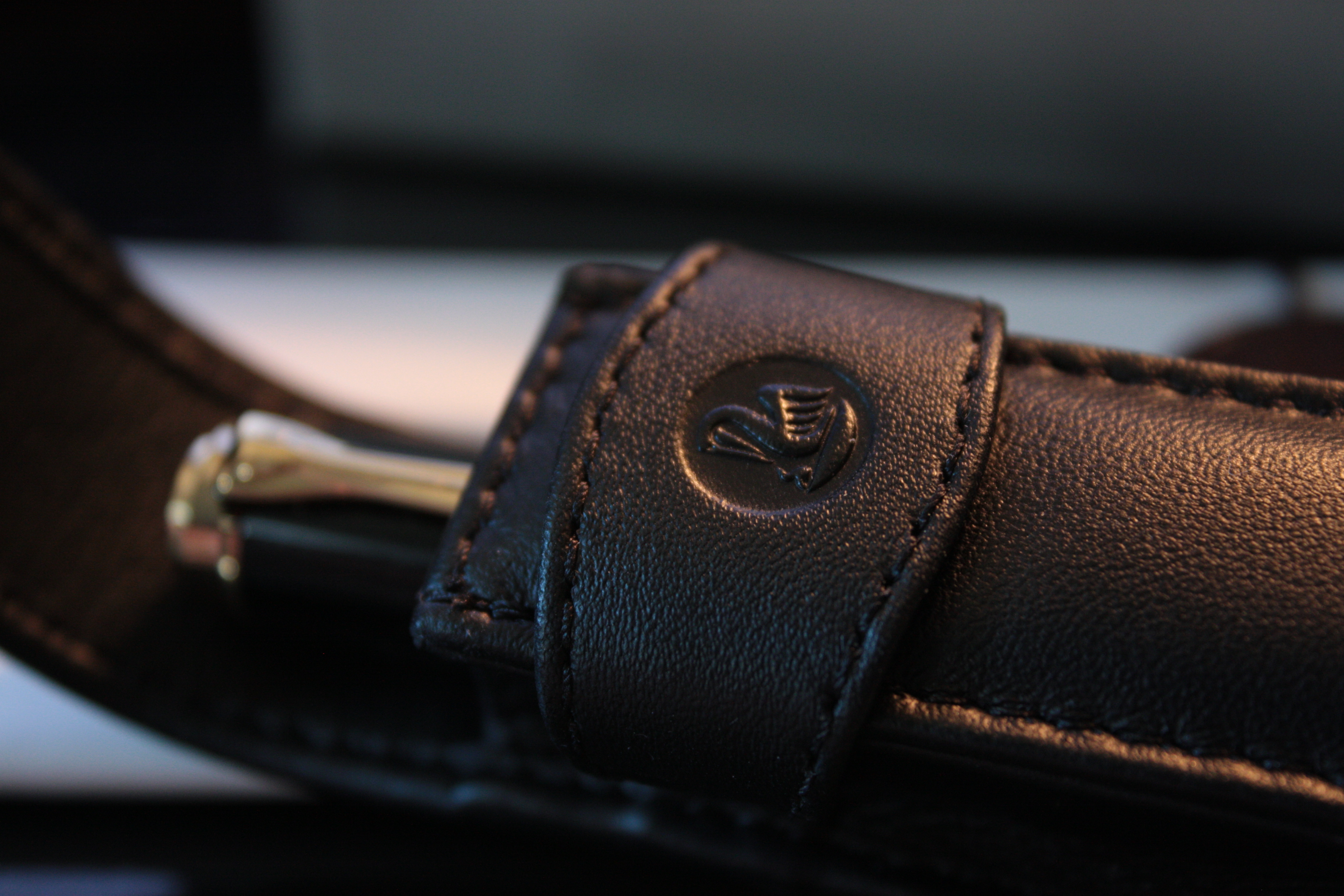 The case was a soft, black leather, with a fold-over flap, which tucked into a loop bearing an embossed Pelikan logo. A single pen (and only a single pen), fits safe and snug in the padded interior. For a free gift, this was excellent value—though I don’t think I’d ever pay the normal retail price for it… and rather sadly, I don’t really think I’m ever likely to actually use it.

The Souverän M600 is a great size for me—although, surprisingly, I have no problems with the M200/M400 either. It’s almost exactly the same dimensions in-hand as the Montblanc Meisterstück 146, and in the same ball-park as the Sailor 1911L.

I inked the M600 from a bottle of Diamine/Cult Pens Deep Dark Red, and put nib to paper… 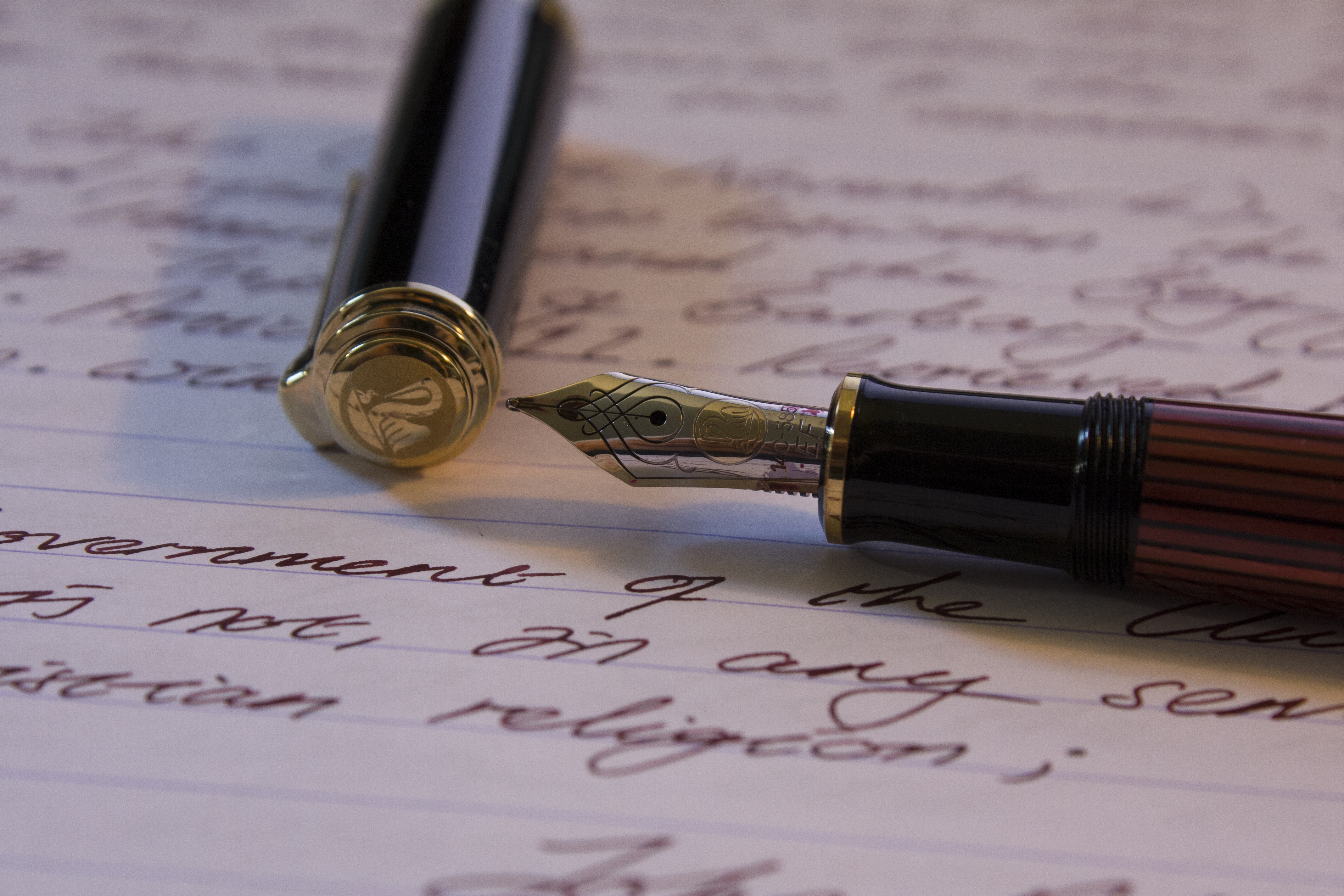 The Deep Dark Red turned out to be a rather dry  ink, and while it wrote with no skips or any problems, and was beautifully smooth, it wasn’t generous. 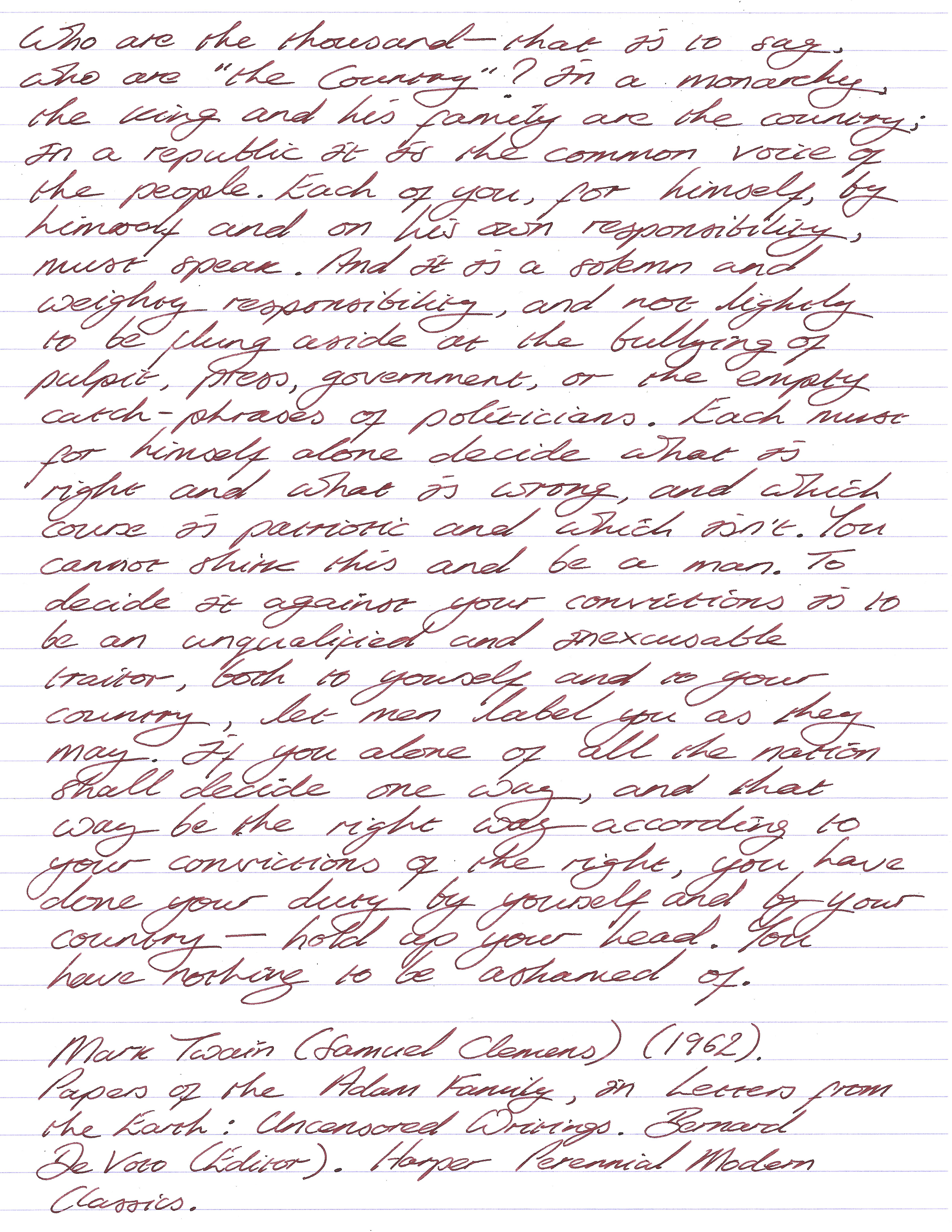 I wasn’t keen on the new ink, so I flushed the pen and gave an older favorite a try, Diamine 150th Anniversary Blood Orange… 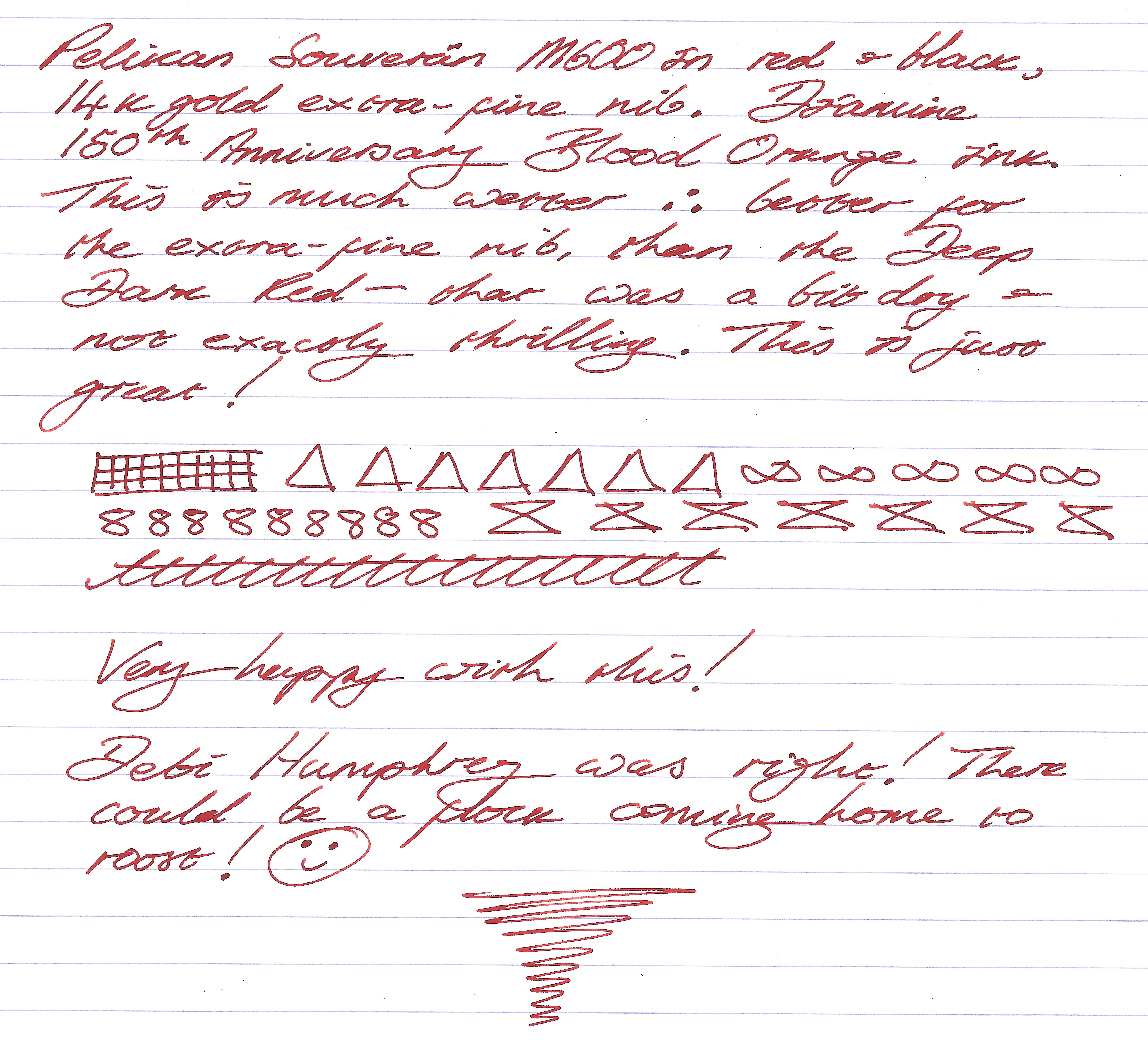 This hardly looked like it had been written with the same nib! The line flowed smoother and faster, and was much more to my liking. But still, I wasn’t quite satisfied; enter Noodler’s Black Swan in Australian Roses… 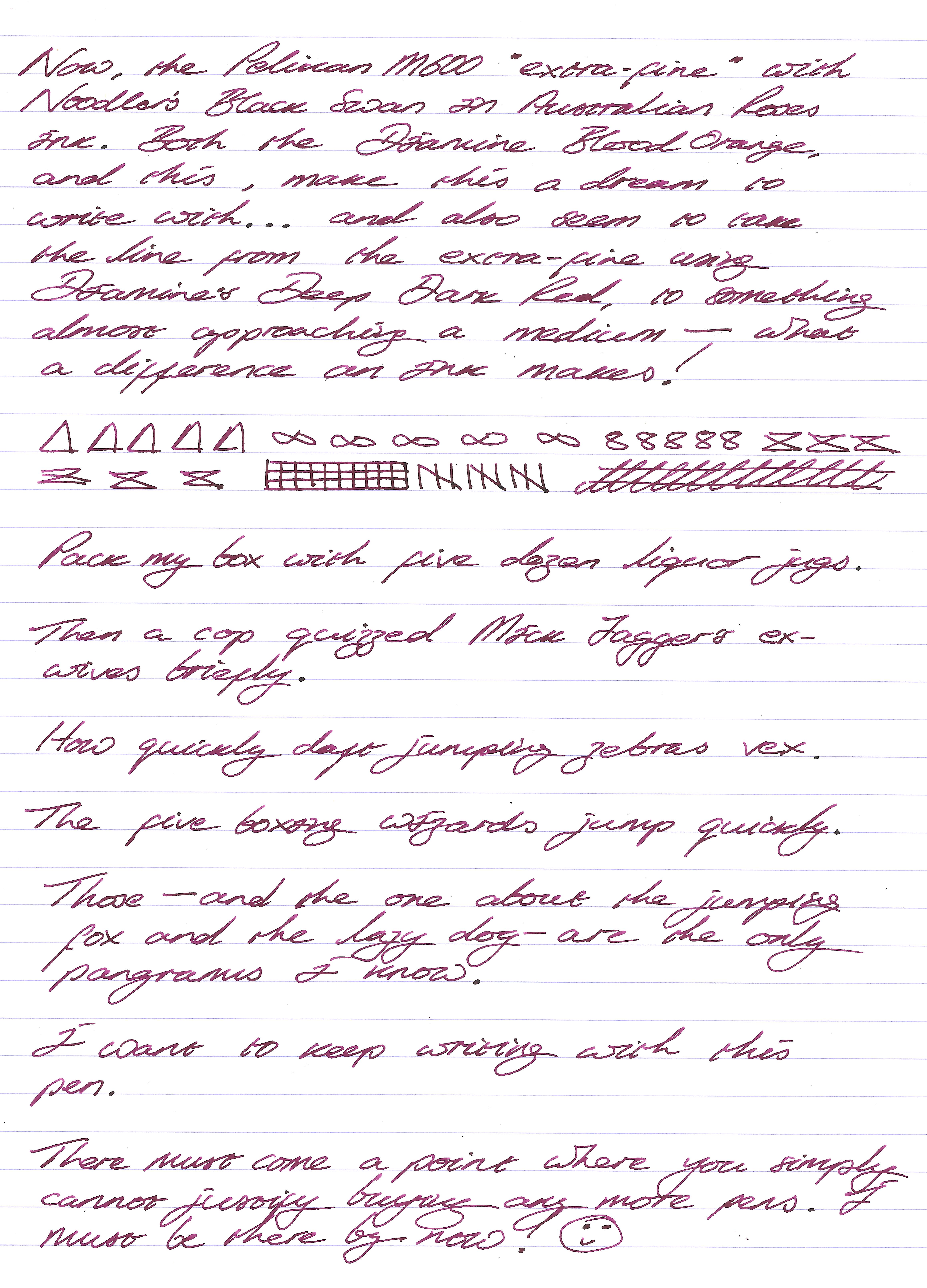 Now I was satisfied. I love the color of this ink, the shading, the way it flows… this and Sailor Jentle Grenade are my favorite dark reds, and I shall probably alternate them in this pen. 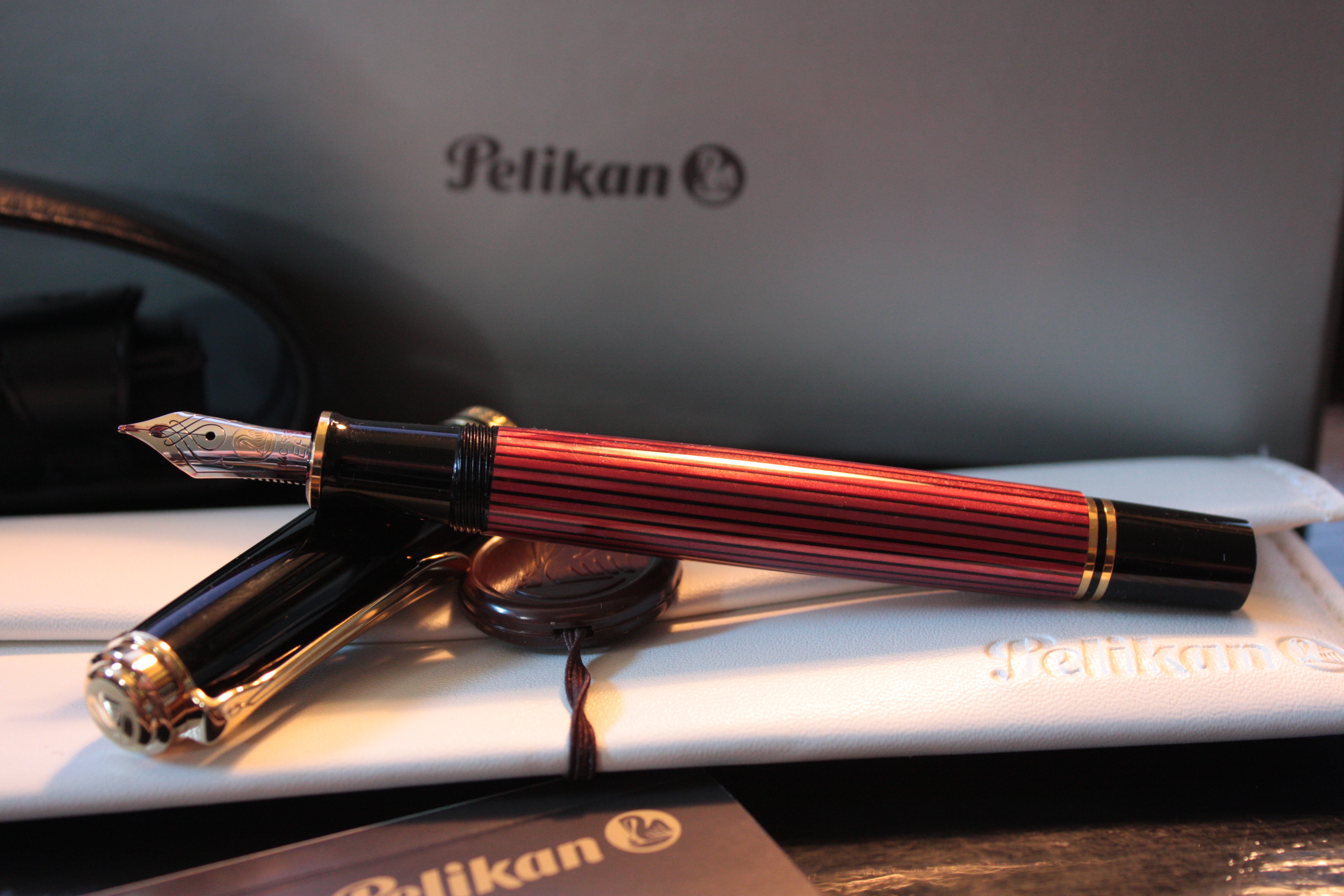 Regular contributor Debi Humphrey  suggested that I might be on my way to a flock of Pelikans, when I wrote about that M200; well, with product like this, nobody who uses quality fountain pens needs any encouragement to add a Pelikan to their wishlist. The quality is second to none, their gold nibs are a joy to use, and even just to watch slide across the page, and their timeless, classic styling is extremely attractive. This probably won’t be the last Pelikan that wings its way to me, but it so easily could be. The Souverän M600 is everything I want in a fountain pen—aesthetics, craftsmanship, quality, and performance—and I have others that equally fit those criteria. Future pens are going to have to reach an extremely high bar—or should that be perch?—to enter into this particular flock.

Also, Pelikan really  needs to do something about it’s North American pricing.

31 thoughts on “Picking Up a Pelikan Souverän M600”