Recently, I have had a number of small parcels wing their way to me from the only Ontario-based, online fountain pen and stationery specialists, the Wonder-People in Toronto (soon to be relocating, but staying in Toronto)…

In the spirit of full disclosure, I have received no monetary reward for my mentioning these guys, I buy from them with my own funds, simply because (as far as my searches can find), they are the only online retail presence, specializing in these products, based in Ontario; and even if they weren’t, their prices and service still go to making them an amazing supplier.

Anyway, what had caught my eye was a budget Pilot pen (the Pilot 78G) that seems to be pretty hard to come by elsewhere. Back in November 2013, Jeff Abbott of The Pen Addict, liked the pen, but commented on how hard it was to find one even then. A few months before The Pen Addict covered it, Azizah Asgarali of Gourmet Pens took a look at the 78G with a broad nib…

The Pilot 78G is an inexpensive, lightweight fountain pen with a few nib options that is great for beginners but also enjoyable for experienced fountain pen users as well.

For the price of the Pilot 78G, you can’t really go wrong.

Wonder Pens have some of the Pilot 78Gs in green and red for $16.50 CAD (2018-04-17), so I opted for the green. Apparently Pilot also do a green/blue (they call teal), and a black, with fine, medium and broad nibs. Wonder Pens can only order the fine and medium, so two days later, something small and green with a medium nib was hovering over my desk: 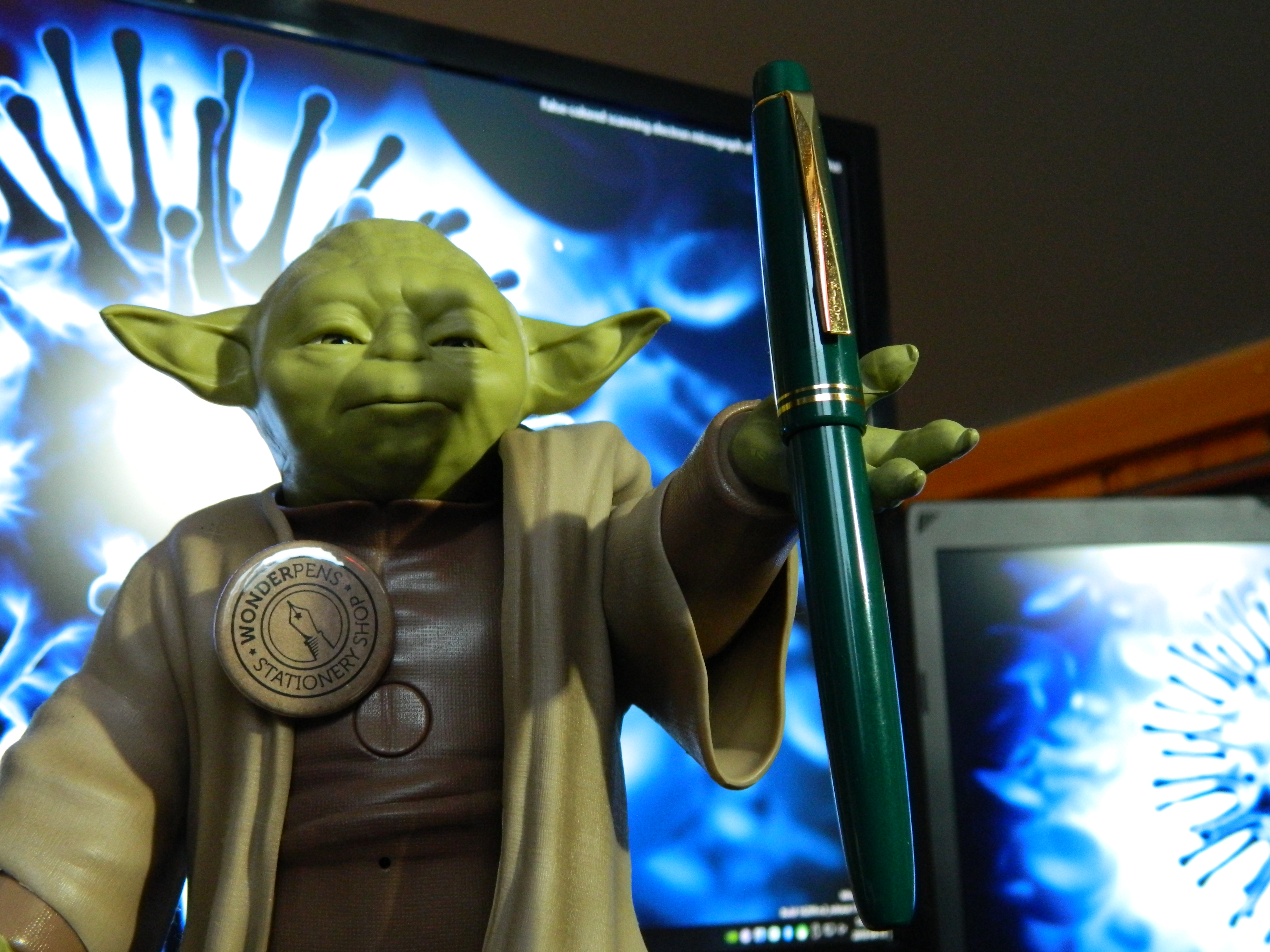 At this price point, you’re not paying for packaging (literally), and my pen arrived ensconced only in plenty of bubble-wrap and a padded envelope. This is not a large pen, being about the same size as the Platinum Plaisir and Century 3776, and its plastic barrel and cap mean that it’s also extremely light. So if large and heavy is more your thing, this won’t be it; but as somebody else small and green once said, “Judge me by my size, do you? Hmm? Hmm. And well you should not.” 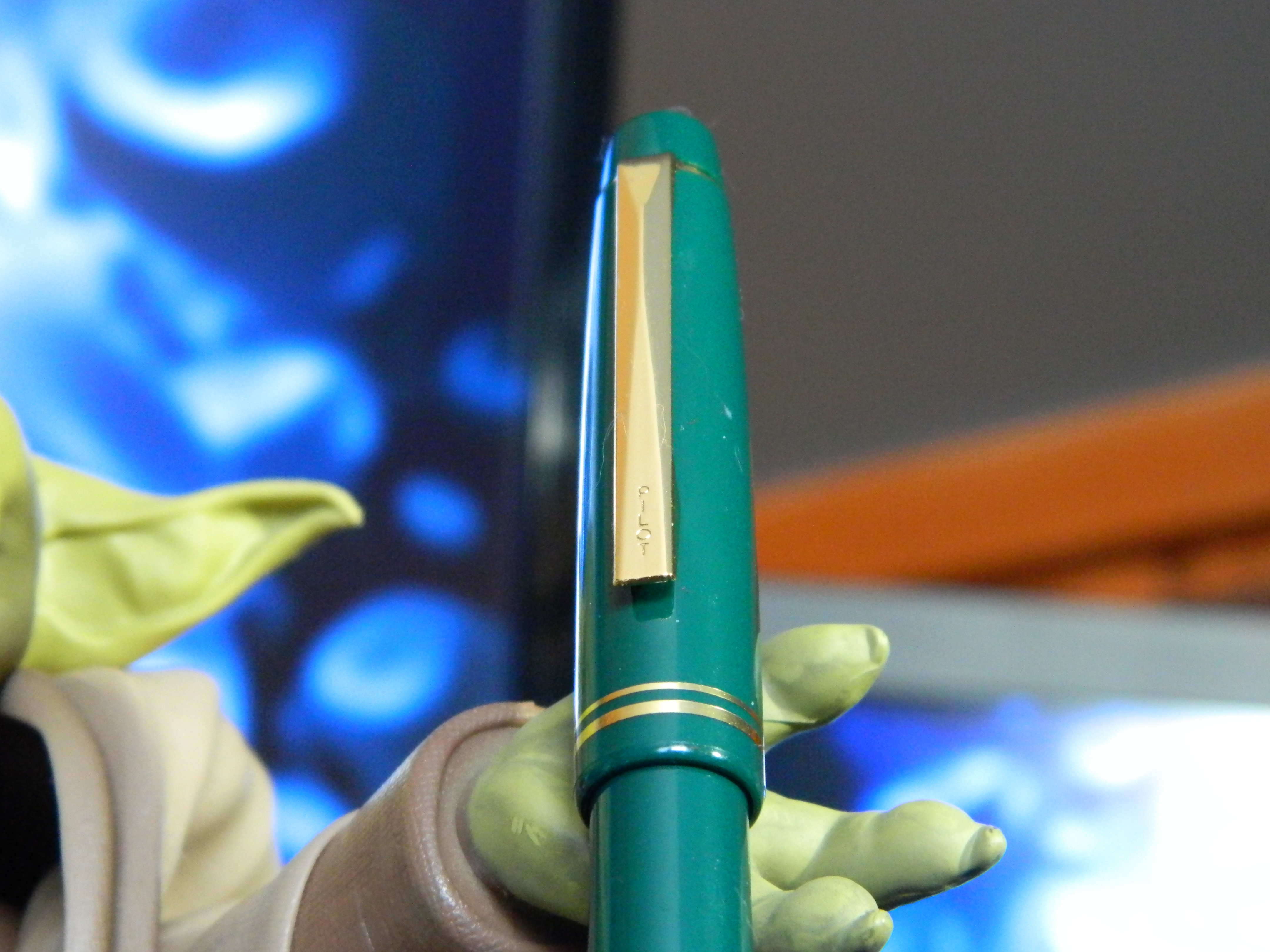 The 78G is well-made, with a classic look and feel. The clip is tight and functional, with understated Pilot branding at the bottom. The screw-on cap carries the only decoration, two gold bands near the bottom. 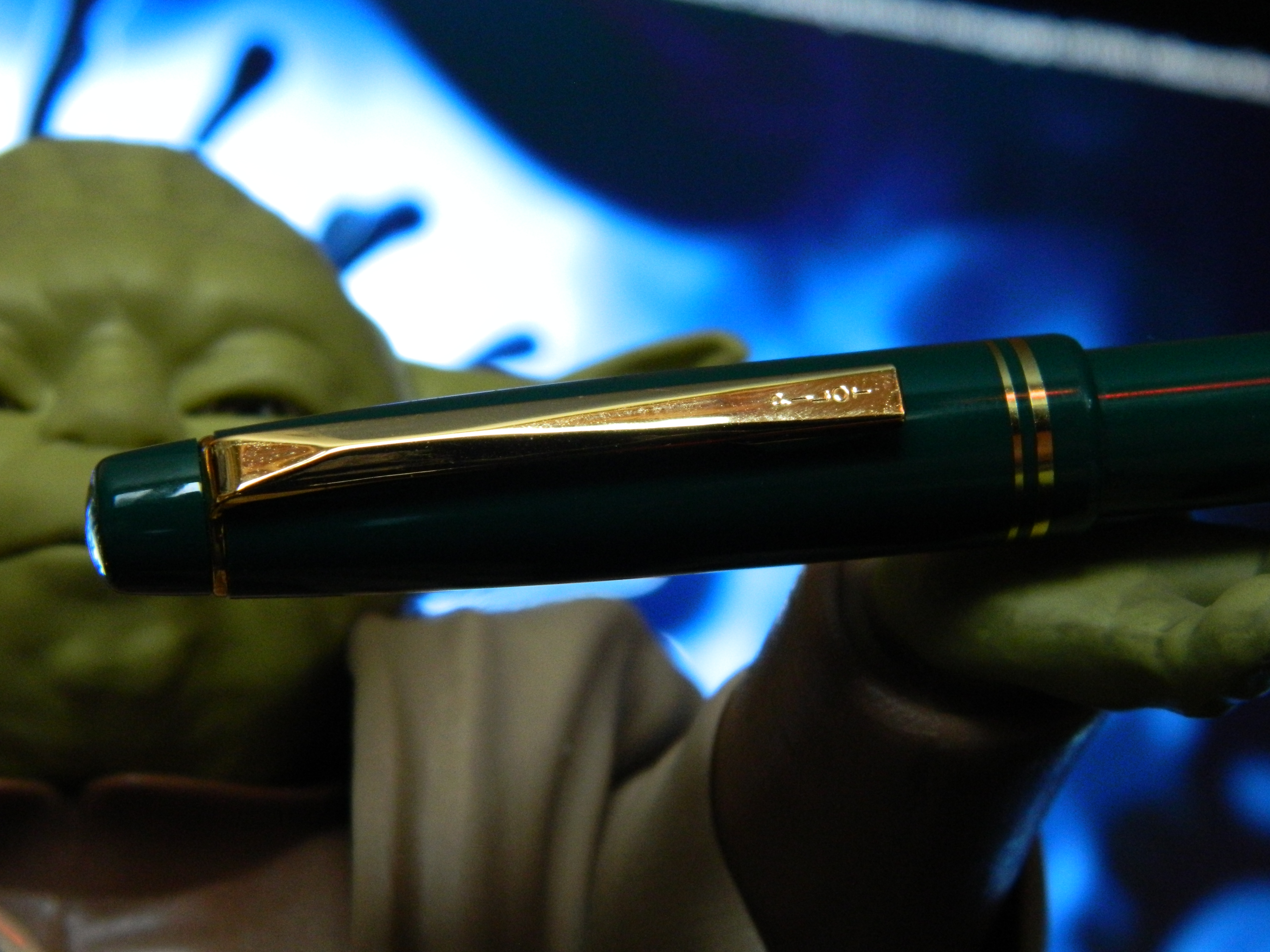 The nib is an attractive, 22k gold-plated steel, with Pilot branding etched across the surface.

Liz over at Wonder Pens has been putting a custom-made button in the box for a few months now. Yoda and I have amassed quite a collection. He wears his with more style than I do. 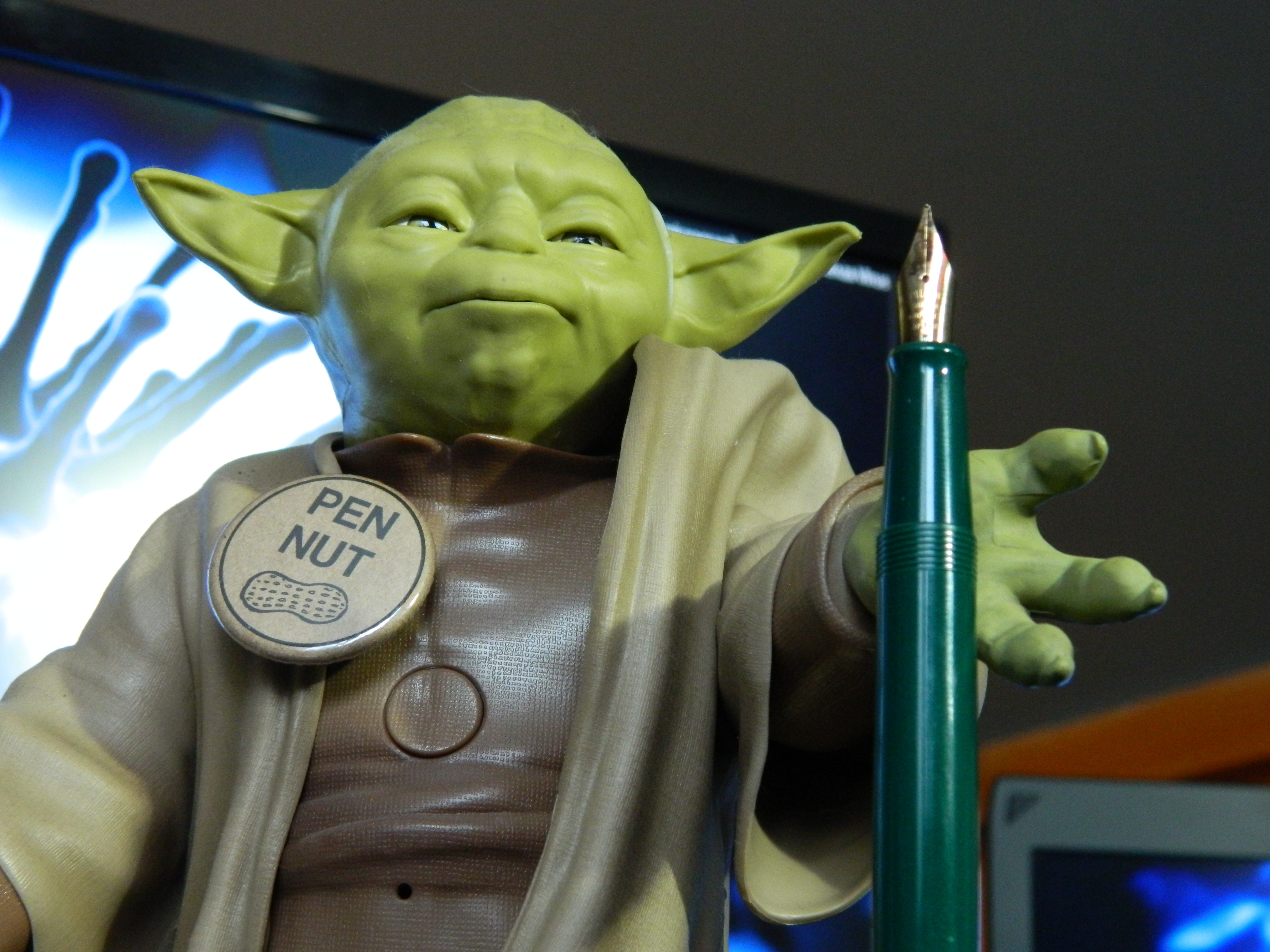 The etching reads PILOT SUPER QUALITY JAPAN and an M  for medium. 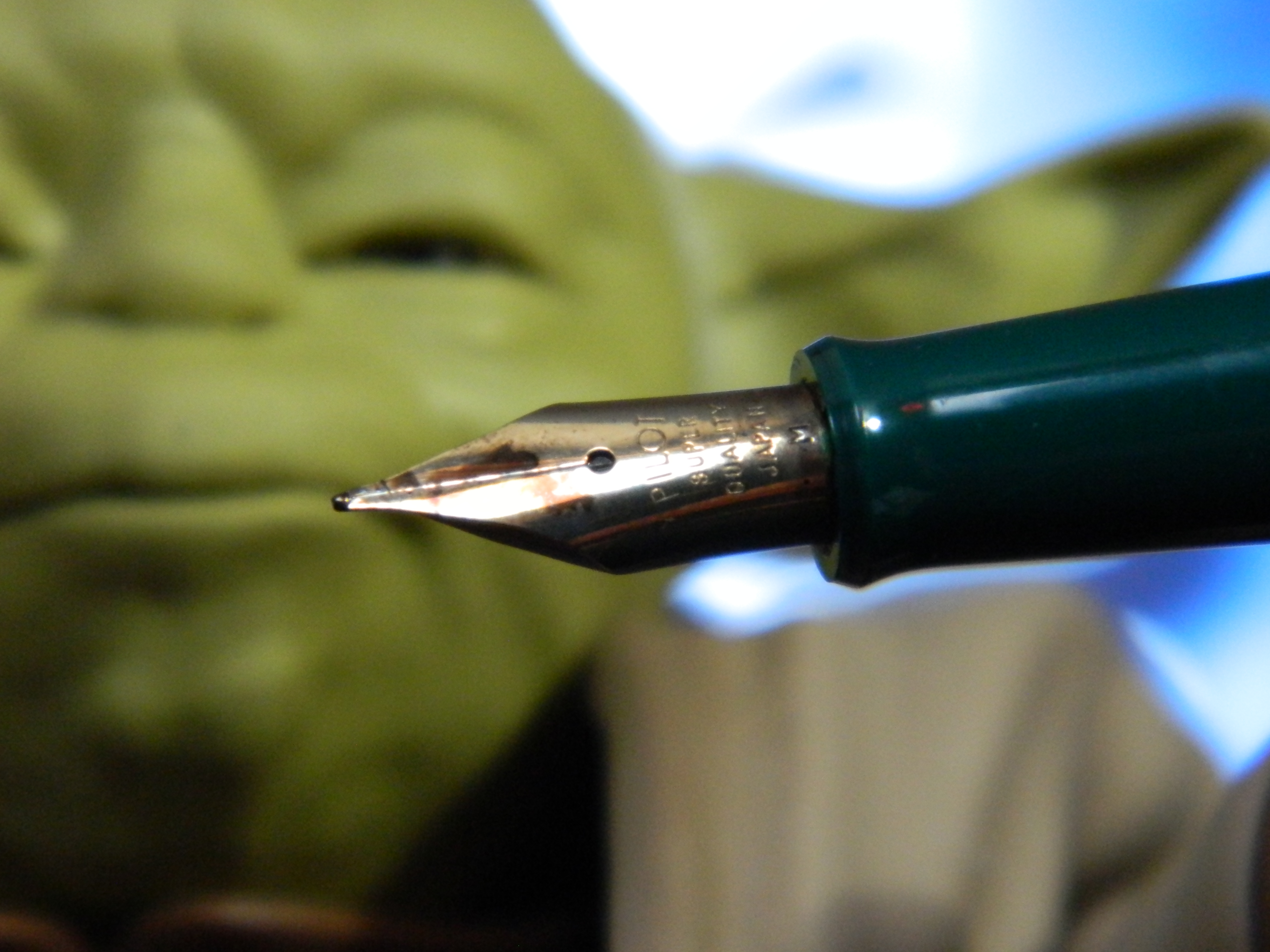 My lighting for macro photography is not the best, but you can still see that the nib arrived well aligned; and take it from me that it was smooth, and ready to write with—despite it costing so little, it didn’t even have a box from which it could be unpacked. 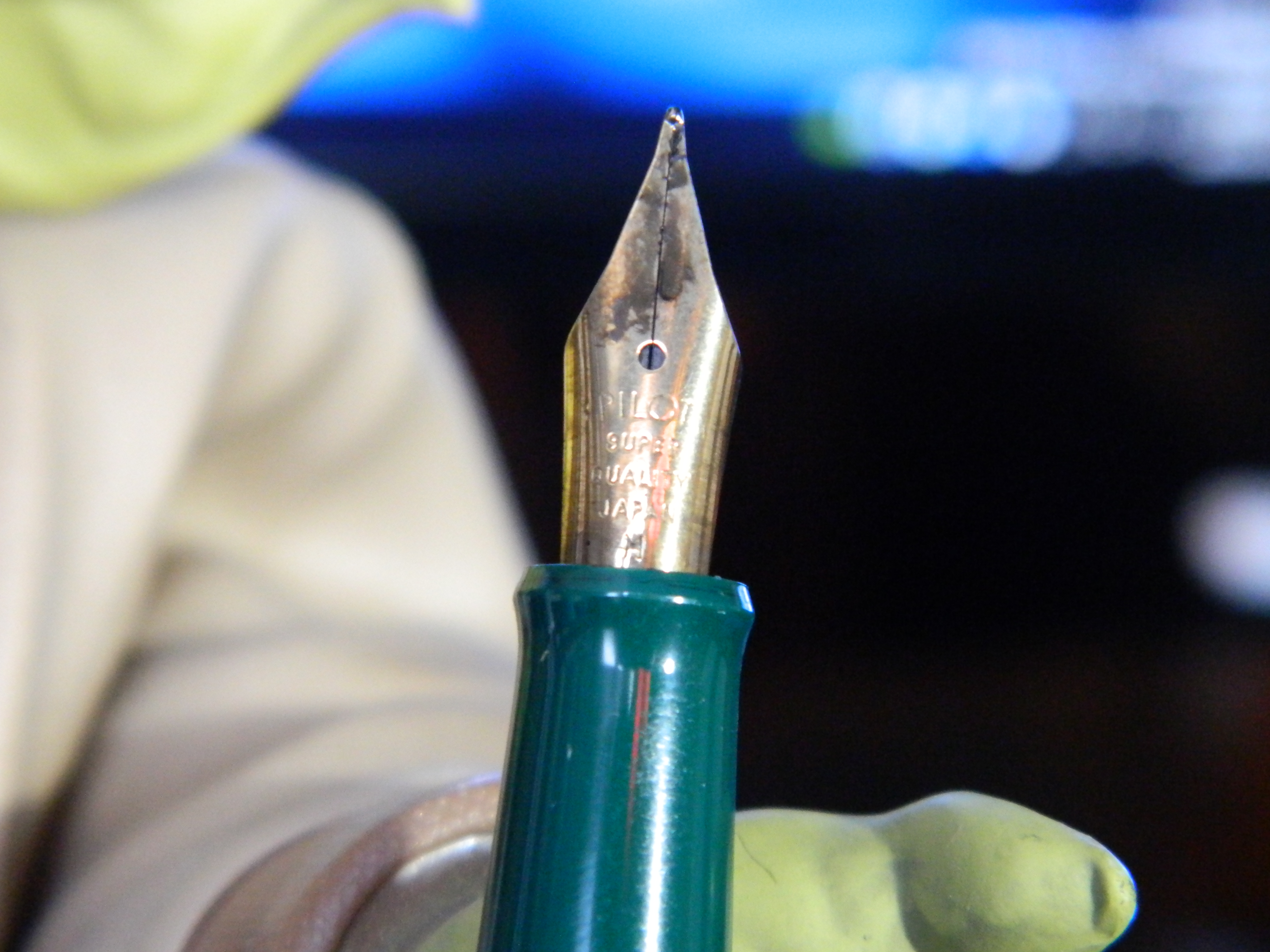 The nib is also interchangeable with the Pilot Plumix and the Prera, so that could be fun for the daring out there. If anybody tries that, let me know how you get on would you please? I’m always interested in that sort of hacking about.

The Pilot 78G, in the dark green, with subtle gold accents makes for a simple, elegant, inexpensive fountain pen, that would be ideal for a school or other kind of Dark Side carry. 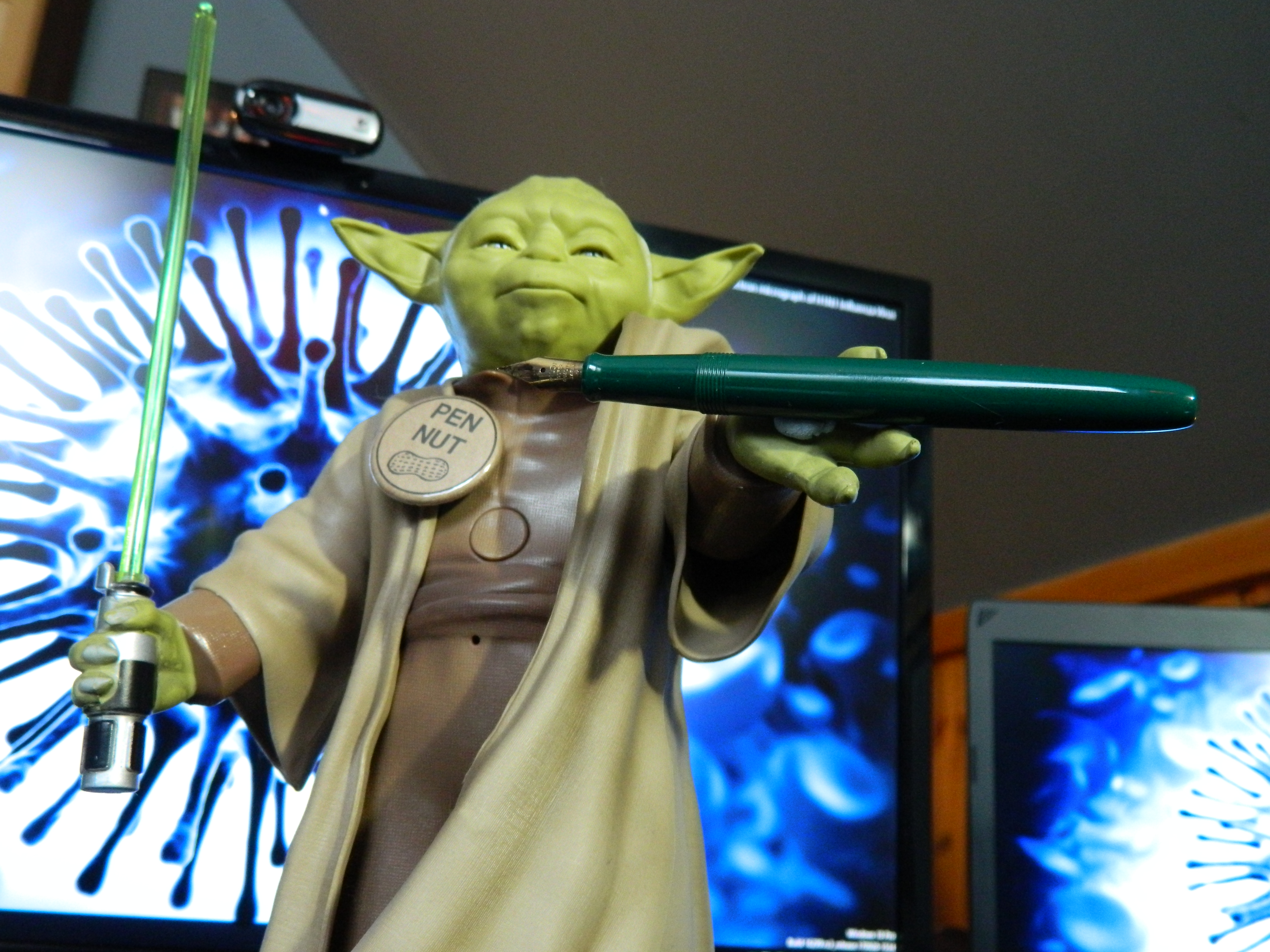 This is the lightest pen I own, and I have to say, my big hands, clumsy fingers, and carpal tunnel syndrome, prefer something a bit longer, larger in circumference, and a little heftier. But if a medium to small pen, and light as a feather is positive for you, then the Pilot 78G probably ticks all your boxes.

The pen posts well, and makes it a little longer for larger hands, but that doesn’t really solve the weight issue.

The 78G uses one of Pilot’s squeezable converters, the same as the Metropolitan, but this can be swapped out for a Pilot Con-40 converter (the Con-50 has been discontinued). This doesn’t allow for much in the way of ink capacity, so if I were using this pen a lot, I would probably look at refilling cartridges with a syringe, or just buying a lot of cartridges.

As I inked this up with Diamine Ochre (yes, that’s a brown ink, in a green pen, and—so far—no plagues of locusts, and no earthquakes in Ontario; so far), I wasn’t expecting much. This is a less than $20 (CAD) pen, with a plastic body and claiming a 22k gold-plated steel nib, that almost nobody sells. Despite the positive reviews (from quite a while ago), there would be a reason so very few places sell these pens wouldn’t there?

Well, Yoda and I can’t find one.

As per Japanese nibs in general, I expected the 78G’s medium to come up more fine than a Western medium (e.g., a Jowo or something similar); but the medium nib on this pen is more fine than the TWSBI fines I’ve had in my collection. I thought that maybe the ink might have had something to do with that, so I changed it about a little. Take a look at the scan below, particularly the comparison with the Platinum Balance’s steel medium (another Japanese nib). 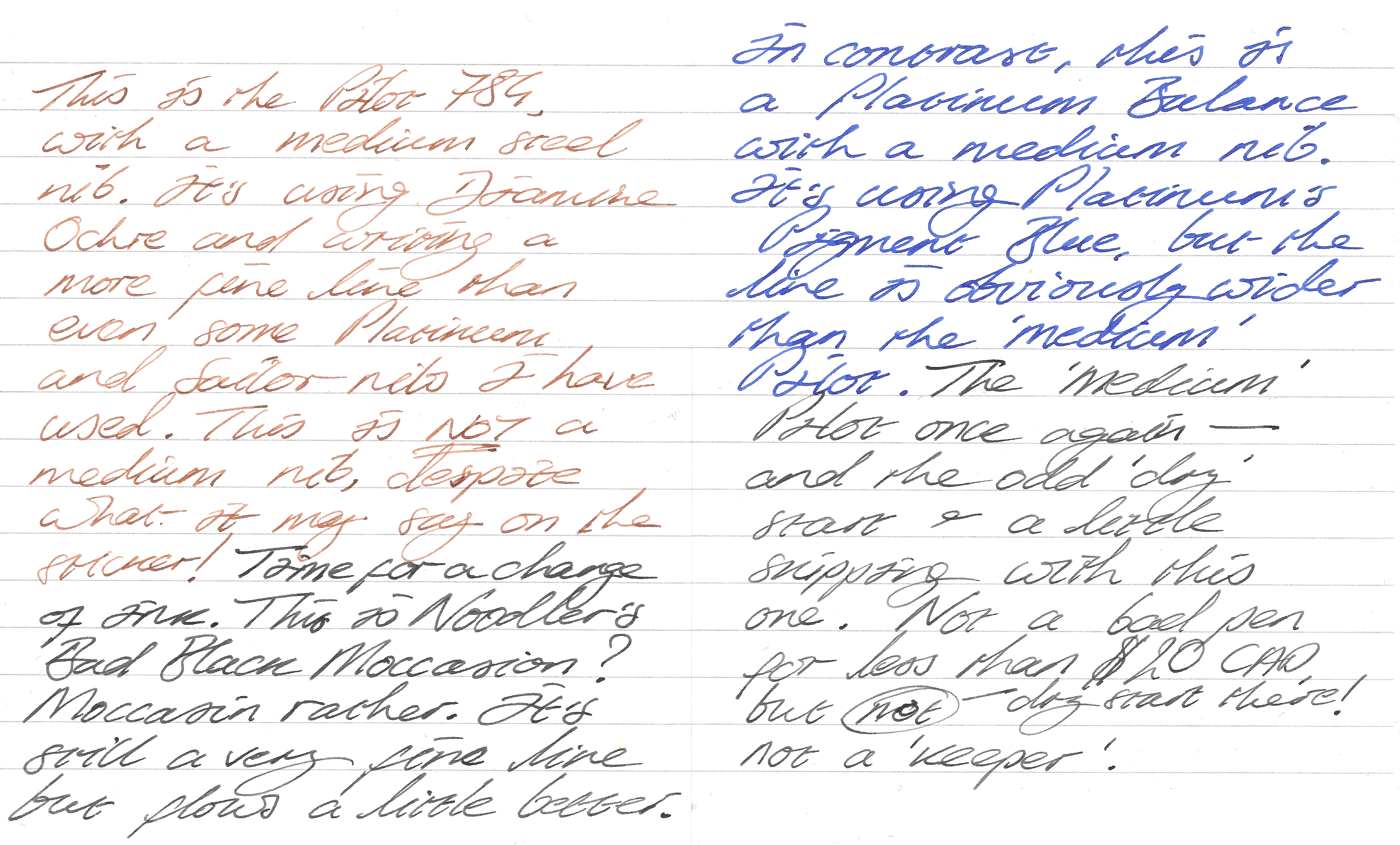 The writing samples were made on 80gsm Rhodia/Clairefontaine No. 13, lined white paper. The first sample was the Diamine Ochre, which I have found to be a little on the dry side, but not excessively so. The black is Noodler’s Bad Black Moccasin, which flows a little better. In comparison, the top of the right-hand page shows a sample from a Platinum Balance medium nib, using Platinum’s Pigment Blue. Finally, back to the 78G again (bottom right), this time using Sailor Kiwa Guro Nano (ultra) black ink.

All the same, for such a medium/fine nib, the Pilot 78G just glided across the page. There was a little feedback, but only enough to tell you that you had the nib on a piece of paper. There were one or two minor dry starts/skips, mostly after just refilling the pen, but on the whole it was pretty reliable.

The Force is with this one. For the money, it’s an excellent writer, and can be thrown in a school bag or pencil case with very little to worry about. 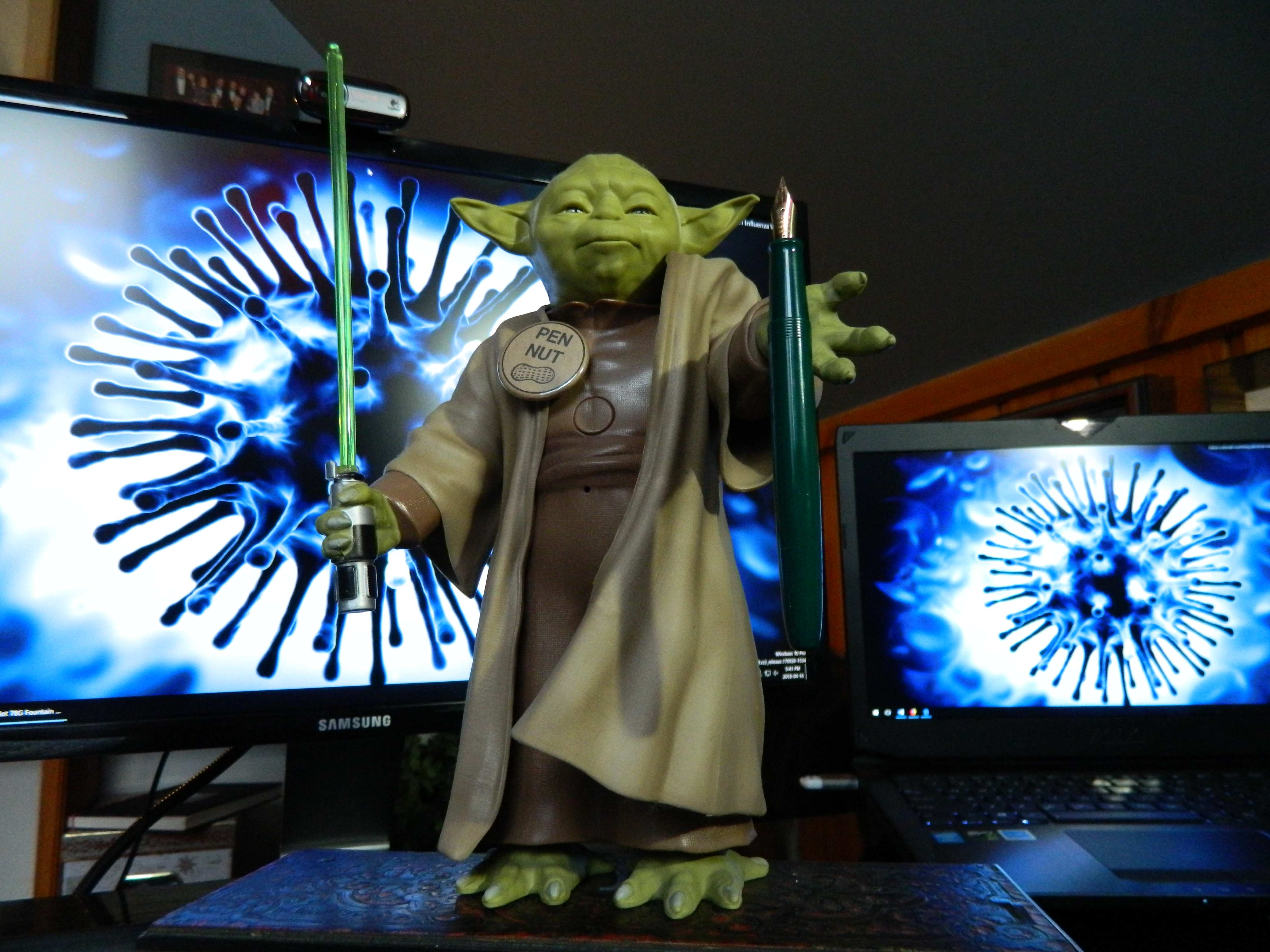 For me, the weight of the pen, and the extent of the medium/fine nib, mean that I will be passing this one on as a gift to a fountain pen newbie friend of mine in the UK. So the light weight is going to help when it comes to postage. But if those factors are what you are looking for in a pen, especially if you happen to be small and green, with only three fingers and no opposable thumbs, then this just might be the pen that you are looking for.

11 thoughts on “Nothing wrong there is, in being small and green: The Pilot 78G”