First, let me tell you what this isn’t; it isn’t a deeply technical review of the pros and cons of various nibs, tipping materials, gold vs. steel (OK, it is a bit about that), and so on. It’s about just getting a nib size right for you. What the sizes mean for the word on the page, and what you might want to shop for, when you don’t know much about fountain pens, and nibs in particular.

When I bought my first fountain pen, I didn’t have a clue what a difference getting the right nib could make. I had about one thing going for me, I was right-handed. At least that meant I wasn’t going to be dragging my hand across freshly written ink the instant it was on the page. If you are left-handed, that complicates matters. Sorry. There are solutions out there for you, but like a cat-loving vegetarian at a rodeo barbecue, you’re probably feeling a little isolated right about now.

Anyway, I listened to the salesman, who—I now realize—knew only a fraction more than I did. Just enough to sound convincing, but not enough to sell me anything I should be buying. So I bought a pen with a medium, 23K gold-plated nib. And only after years of use, and finally comparing it with something decent, did I come to the conclusion that it was crap. Scratchy as all Hell, and way over-priced. And so the journey I’ve been chronicling began.

This post is about figuring out which nib is for you… music, stub, bold, medium, fine, extra-fine (I don’t own one), extra-extra-intra-cellular-needle-point fine with the cursive nibmeister grind, and so on. Because not all bold nibs are as bold as each other:

Just for the record, all writing samples scanned here, are on 80gsm, Clairefontaine white paper, from a Rhodia notepad. Also, with the exception of the Sailor 1911L 21K gold nib, and the Platinum Century 3776 14K gold nib, all other nibs discussed below are steel.

Just look at the size of the line width this makes, compared to the bold nibs next to it (in the scan above). This nib does not lend itself to small, delicate handwriting.

Also, there are practical considerations. It uses a lot of ink for one thing, and if you write with it a lot, then you’ll be re-filling converters and swapping cartridges a lot.

Plus, you’ll need to always use good quality paper, because the amount of ink is likely to bleed through to the other side of the cheap stuff.

Platinum’s 14K gold music nib is, like the nibs on Japanese pens in general—an absolute treat to write with; it’s as smooth as ice on glass, and just glides across the paper.

But, I found that it just wasn’t practical as a daily writer. Too much ink, even my chunky handwriting suffered from the thickness of the line this nib puts on the paper.

It’s a great pen for addressing letters (make sure you use a waterproof ink, like Sailor’s Kiwa-Guro Ultra Black carbon); writing greetings cards; or extravagant signatures, but otherwise, that beautiful golden nib remains dry and boxed.

A stub nib is about variation in the line it puts on the page. The tip of the nib is ground to a flat surface, which produces a narrower line on the cross strokes of your writing, and a broader line on the down strokes.

Personally I find it makes my rather scruffy handwriting look a little more elegant. As if I actually knew what I was doing.

You be the judge.

The Edison nib is a long way from what came out of the box. At first it was pretty scratchy, and I was rather disappointed, but after a little judicious rubbing down (buy a spare nib if you’re going to do this), it is now the smoothest writing experience I get from any of my pens.

The TWSBI is nice too. So nice in fact, that I’ve just purchased one of the more expensive TWSBI 580AL (for aluminium) models, with the same nib. The only real difference that I’ve found is that the TWSBI needs just a fraction more pressure to get the line size that you see here. Of course, that may be due more to the ink than the nib. We’ll see when I get the 580AL (should be coming today, come on Canada Post!).

Verdict
The 1.1mm stub is definitely my favourite kind of nib. At my next pen show, I may get a nibmeister to put a stub/italic grind on one of the next two nibs I’ll talk about…

Now let me be the first to remind everybody that this is not a huge generalized sample of fountain pen nibs. What I’m going to talk about is hardly even a fair comparison. In this sample I’m comparing a 21K gold nib, handcrafted on a Sailor 1911L pen for (currently), about $400, to a TWSBI Eco, steel nib, on a pen that costs about $40 (all Canadian).

And rather surprisingly—or not so, depending on how cynical you are—there’s not a lot in the comparison.

The sample on the top is the Sailor, using J. Herbin Perle Noire black ink, and the one on the bottom is the TWSBI Eco, using Sailor Jentle Blue.

As is usual for Japanese nibs, the Sailor is not quite so broad, or wet as the TWSBI, and that probably accounts for just a touch more feedback from the paper than I felt from the cheaper pen.

I do like the bold nibs on both pens, and if I’m honest, I find the TWSBI is actually a bit more fun to write with than the Sailor. There seems to be more flow. It’s like I feel I should write a bit faster, because the ink is just pouring from the pen—even though it’s not.

One last thing though, I do get a dry start with the TWSBI (most times I use it in fact). It’s nothing serious, just the first stroke of the pen, which disappears after about 2 or 3mm of a line. But that usually equates to the first stroke, of the first letter, on the page. It’s not even irritating really, it just happens, I repeat the stroke, and off we go.

But it never happens to the Sailor. Oooh no, and I’ve never known it happen to even my cheapest Japanese pens; they’re all way too well-behaved.

Verdict
Almost there… but just a little too inky still. Not very practical for my daily needs.

I suppose I should have covered medium nibs first, but I’m sticking to the order they appear in the group sample graphic above. That’s the way I put it together, and I can’t be bothered to head back to Photoshop and move everything around just now.

This is where, even on high quality paper, you being to feel the toothiness of the paper as the nib moves about. A fine, or extra-fine, nib will start to catch on cheap paper, and even on material like the Clairefontaine 80gsm, you can feel the texture as you write.

If I had to make a judgement call, I’d say the Platinum fine nibs felt less toothy than the TWSBI, and provide a smoother writing experience; but there really isn’t a great deal between them.

Some people prefer the fine lines of these nibs, because they can write smaller, and they say that the line represents what they would get from a ballpoint, or good gel-pen.

I say, if you want a line that looks like it came from a ballpoint, then buy a ballpoint.

Verdict
I use fine nibs for commentary—making margin notes and giving feedback on undergraduate assignments, the sort of thing where you might need to write fairly small.

Fine nibs are not kind to my inelegant handwriting. And so, I prefer these:

In this sample, from the top, we have a Platinum Balance/Cool steel nib, with a Platinum-supplied blue ink cartridge; another Balance with J. Herbin Vert Pre (green); and a Platinum Plaisir, with a J. Herbin Eclat de Saphir (Blue) cartridge, and a Platinum cartridge adapter.

Hands down, the Balance/Cool nibs have been superior to my one experience with the Plaisir, which was not pleasurable at all when it first came out of the box. In fact it was awful, and the thing that first prompted my experiments with nib smoothing… and which eventually turned out to be absolutely wonderful.

I wouldn’t hesitate to buy another Plaisir, but I would also be well aware that I would probably have to work on the nib, and risk having to buy yet another if I made a mess of it.

The Balance/Cool nibs have, each and every one, been absolutely amazing straight out of their boxes.

From what I hear tell, they’re a little finer than mediums on pens like the TWSBI, or from Lamy, and Kaweco, but I can’t swear to that, since I haven’t compared them. The only medium nibs I have, belong to Platinum pens. All I can tell you, is that they are smooth, efficient, and reliable.

Being medium nibs, they are a little smoother on the page than their fine brethren, and you can see for yourself that they leave a slightly thicker line (as they’re supposed to). They do exactly what they’re supposed to, and they do it very well indeed.

Verdict
Not too much ink; you don’t have to write too large for practicality; you can still see the shading in attractive ink colors; and they’re far smoother on almost any kind of paper than a fine nib. After a stub, these are my favorite, and in fact, I have a Platinum Century 3776 with a 14K gold, medium nib, on order from Amazon as we speak.

For me, and my style of handwriting (if you can call scrappy, with a capital crappy, a style), they are my second choice behind the 1.1mm stubs I like so much.

A Final Word About Steel vs. Gold

Fountain pen ink will always corrode steel. That’s why it’s not wise to eyedropper-fill a pen that has steel threads on the barrel or section. And it’s why a steel-nibbed fountain pen is unlikely to make a family heirloom.

It’s also why they are substantially cheaper than gold-nibbed pens, and thus I have far more steel nibs in and around my desk than gold ones.

Some people will tell you that gold nibs are intrinsically smoother than steel. Hmm, tell that to the TWSBI Eco above, or my Edison Collier 1.1mm stub. I beg to differ, a well-crafted steel nib can be just as smooth, or smoother, than a gold nib… depending upon all sorts of variables. Not least of which is your own handwriting, and the pressure you apply to the pen as you write.

The moral of this story? Check out a pen nib in a physical store if you’re buying from a manufacturer for the first time. Get to know their nibs, especially if you’re spending what you consider to be serious money on a pen. You want to be happy with your pen, and you want to spend happy hours writing with your choice of nib.

And I’m very happy with mine… 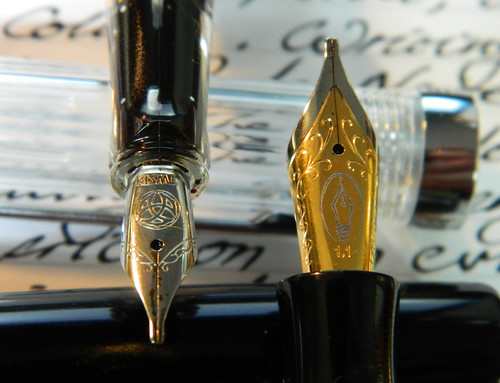