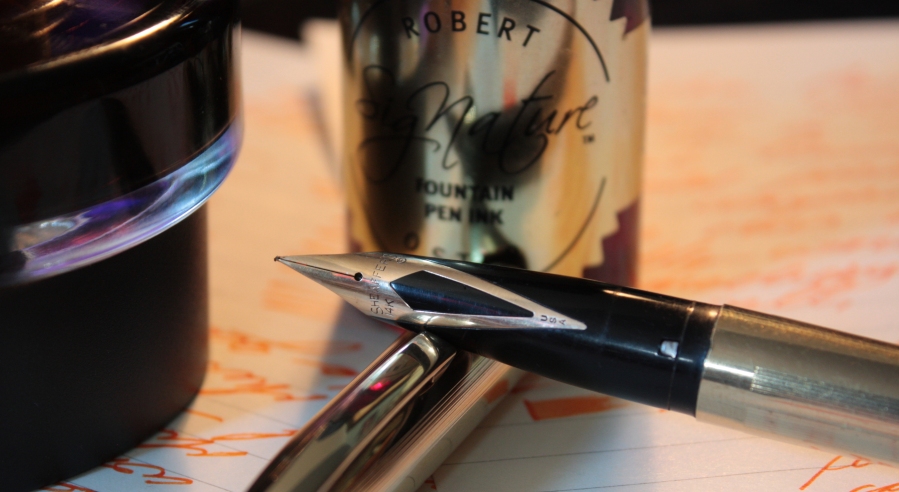 At around about the same time this year, three new products and one that was older than me, caught my eye. The first was a bursting orange from The Pen Addict’s Brad Dowdy and the Australian manufacturer Robert Oster, with the nicely tongue-in-cheek name of Fire on Fire. This coincided with the delivery of a pen that I had recently stumbled upon at the Toronto vintage pen supplier, The Peel Pen Shop.

John Culmer’s online iteration of The Peel Pen Shop follows in a long history of a well-respected, Canadian brick and mortar pen shop. The history of the shop has been well-reported in several locations, including the blog Fountain Pen History, Hand & Pen (printable version of this post available here—with kind permission from the author). I had been long mulling over a c1961 Sheaffer Imperial Triumph, and had finally reached out to Mr. Culmer, who had responded with—what I have come to find is—his customary excellent service. The pen had very promptly arrived, and was sitting on my desk, just itching for an ink to compliment its 23k gold-filled, cap, clip, barrel and finial. More on the pen later. For now, I heartily recommend checking out John’s store, especially the prices on some of the vintage Montblancs.

But also catching my eye was another orange, in the shape of the new Lamy 2019 Special Edition Bronze, and the matching Al Star 2019 Bronze fountain pen. I had no real doubts about the ink—that looked great—but, the pen, well, that was different. The two Lamy Aions I had picked up ages ago were nice pens, and wrote pretty well, but the so-called flag-ship of the Lamy line, the Lamy 2000, had been a complete mess. Spare/replacement Lamy nibs had been awful, and in-store trials of Lamy Safaris and Al-Stars have never been a good experience for me. And yet, so many bloggers, reviewers and other friends kept telling me how good the brand is, and how much fun their products are. I had to give them another chance right? Yeah, right, so I got the pen and the ink.

One of them was a bad move.

Damn, did that give the review away? Really, after my last post, you’d think I was trying to do a hatchet job on Lamy’s pens. I’m not, really, honestly. I keep giving them a chance, and they keep just letting me down.

Let’s take a look at the inks first… 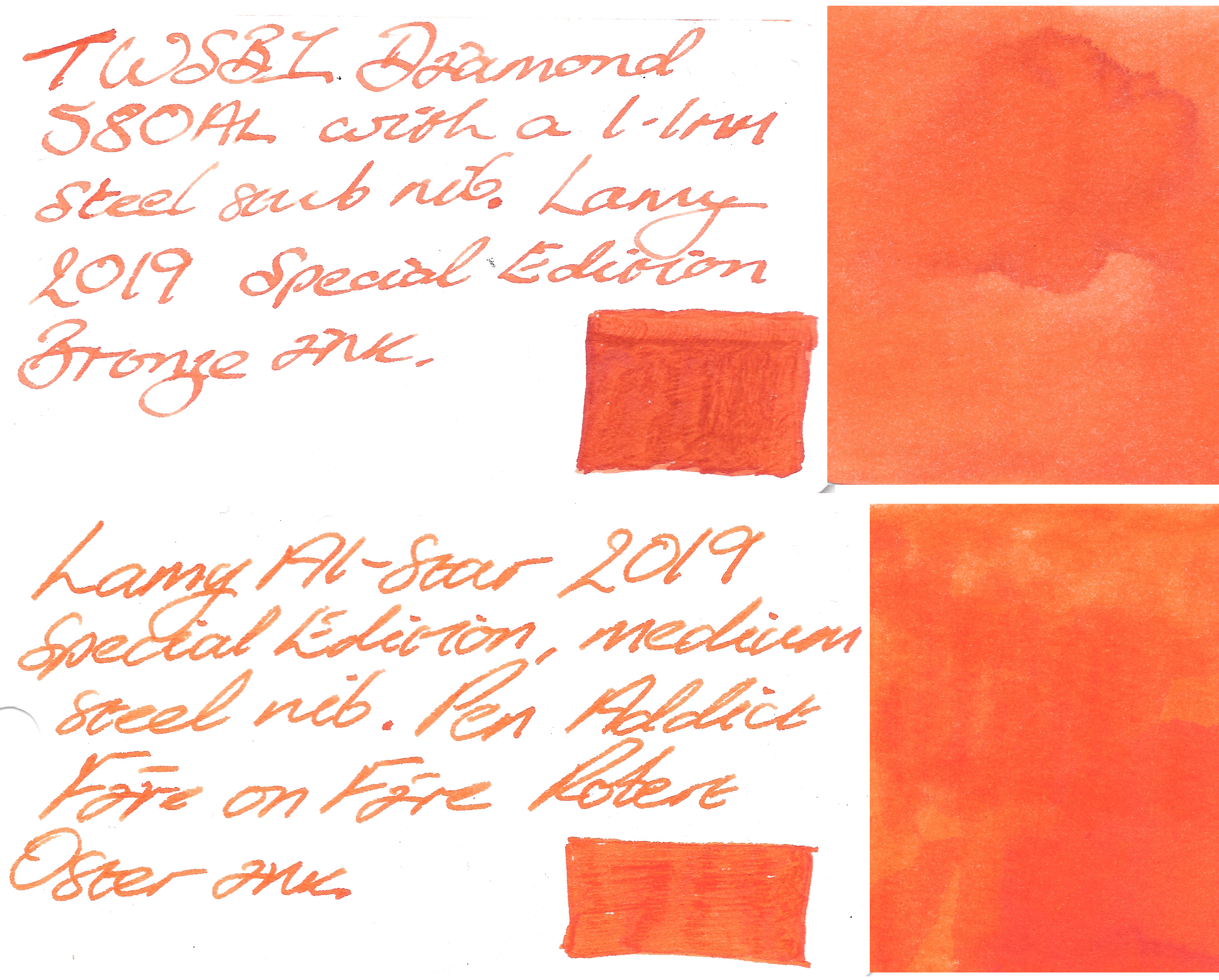 At first look there really isn’t one whole Hell-of-a-lot in it. When you look at them, they are two very similar orange inks. Visually, my preference is definitely for the Pen Addict/Robert Oster Fire on Fire… it’s really close, but for me, Brad Dowdy’s effort is the more punchy/vibrant of the two, but this is such a subjective call, it’s for everyone to make for themselves.

I ran the two inks through a selection of different pens, a TWSBI Diamond 580AL with a 1.1mm steel stub nib; a TWSBI Eco in broad; the Lamy Al Star in medium; the 1961 Sheaffer Imperial Triumph, with a 14K gold, fine, inlaid nib; and a Pelikan M200 Classic with a fine M400, 14K gold nib. In terms of performance, I have to say that I come down on the side of the Pen Addict Fire on Fire once again. Drying times were on a par for each of the different nibs. On Rhodia/Clairefontaine 90gsm paper, medium nibs gave a line that dried in about 15 seconds. I would have to recommend the Lamy 2019 Bronze only for medium, broad and stub nibs though, it seemed to me that it didn’t flow as well as the Pen Addict Fire on Fire. I found that the Lamy Bronze skipped a little in the Sheaffer and the Pelikan, even though both are quite generous for fine nibs. The Pen Addict/Robert Oster Fire on Fire ran beautifully through every nib I tried it with, an easy, smooth flow that looked great no matter how I used it.

The Pens and Writing Samples 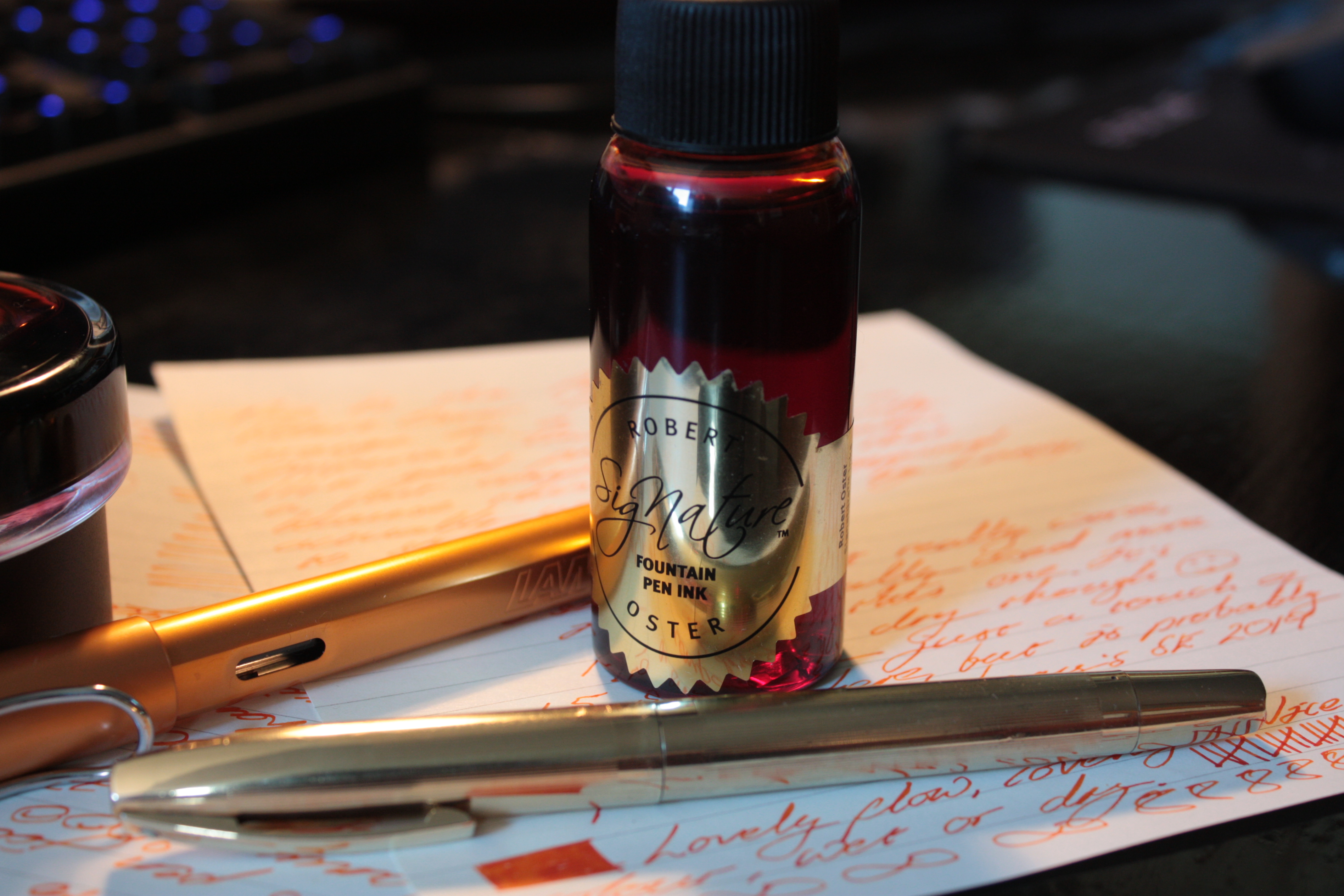 I can appreciate that a gold-filled pen does not rock everyone’s boat, and that my tastes can be pretty boring. I’m not going to do a full run-down of either pen here, suffice to say that the Sheaffer Imperial Triumph is not a large pen, it’s about 11.8cm long from nib tip to finial, which is comparable to the Sailor Pro Gear classic at 11.6cm, and it weighs in at about 26g (about the same as a Pilot Metropolitan). It’s comfortable in the hand, and is balanced wonderfully, posted or unposted. And its 14k gold, fine, inlaid nib, after servicing by John Culmer before selling the pen to me, wrote like an absolute dream. Even with that lump of paper I’ve just seen, wedged between the tines in the photo below… 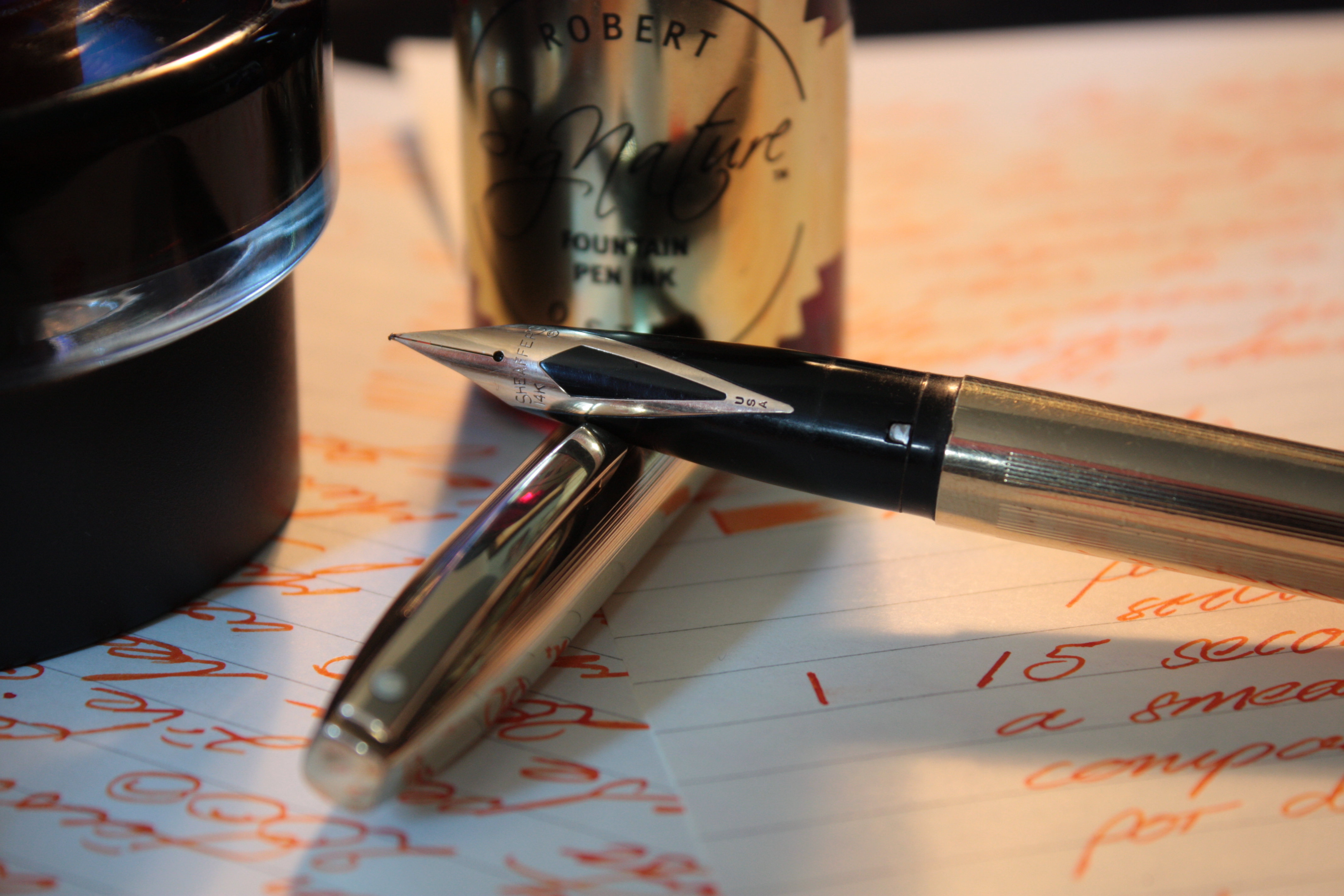 Which is a great deal more than could be said for the Lousy Lamy, or should that be Awful Al Star? I suppose it’s a bit unfair to compare a solid 14K gold nib, albeit an almost 70-year-old 14K gold nib, with a steel nib worth a fraction of the price. But I will anyway.

I won’t describe the Lamy Al Star in any great detail, or in terms of size, weight and so on; this is one of the most popular fountain pens on the market, and has been reviewed extensively over the years. What I will say is that the bronze of the 2019 Special Edition is a really nice, glossy shade, which I love looking at… whenever my daughter uses it. Because I don’t, and never will again. And the less said about the giant paper-clip stuck on the cap the better.

What I will also say is that, just like the previous Lamy I bought, for about four times the $$$, this one didn’t write either. Why does Lamy’s quality control always seem to pick the truly terrible nibs for me? Yep, the Sheaffer managed to write beautifully from the moment the nib hit the paper, the Lamy was, well, rubbish. To be fair, John Culmer at the Peel Pen Shop, would have previously serviced the Sheaffer, so I suppose we should discount the fact that it actually wrote as a given. But I would suggest that any pen marketed as a pen, as opposed to, say, a tent peg, should actually write. The Lamy, as you can see, would have been as much use holding down a sheet of canvas somewhere; which is to say, not a great deal.

After two solid hours of concerted rubbing down on a sheet of micro-mesh, testing, more rubbing down, brassing, testing, brassing, rubbing down and so on, I finally got it to write a decent, consistent line. But by that time, my patience was at an absolute end, and despite the nice colour, the Al Star/Safari design is a big fail for me. I considered the garbage bin, just so that I could take a picture of it amongst the banana skins, used

Keurig coffee pods, ink-stained tissue paper and other unmentionables, but good sense won over and the Al Star was gifted to my daughter. Fortunately, she’s too young to be reminded of Microsoft’s Clippy every time she picks up the thing, and really rather likes it. In fact, if she had written this review, it would probably have come off as far and away better than the Sheaffer. Go figure, but then, she didn’t have to rub the thing down for two hours.

Being a lousy father of course, I didn’t give her the matching ink. I gave her a bottle of J. Herbin 1670 Anniversary Rouge Hematite… with a dire warning about having to clean out her pen nibs every week.

The Lamy Al Star 2019 Special Edition Bronze is absolutely not for me. Lamy’s pens have been—for me—a consistent failure in terms of design and performance. Once bitten, twice shy as they say, well I’ve been bitten more than common sense says I should have been. So, pain or pleasure? The Lamy Al Star was definitely a pain, but John Culmer’s Sheaffer Imperial? Definitely a pleasure. The Lamy bronze ink however, is very cool. It is not though, so hot that it beats, or even equals, the Pen Addict/Robert Oster Fire on Fire. Brad Dowdy’s first ink is very, very, hot, and, er, cool.

5 thoughts on “The Pen Addict vs. Lamy Shootout—Brad’s on Fire!”