So, you can probably stop reading there then… the TWSBI Vac700R is yet another great intermediate pen from TWSBI. But… I hear you ask, or would if this wasn’t a blog with no sound, and you were really that engaged… just what is it like to write with? How does it compare to the Diamond 580AL, or the Eco? How difficult is that filling mechanism to get full? Let’s find out shall we? 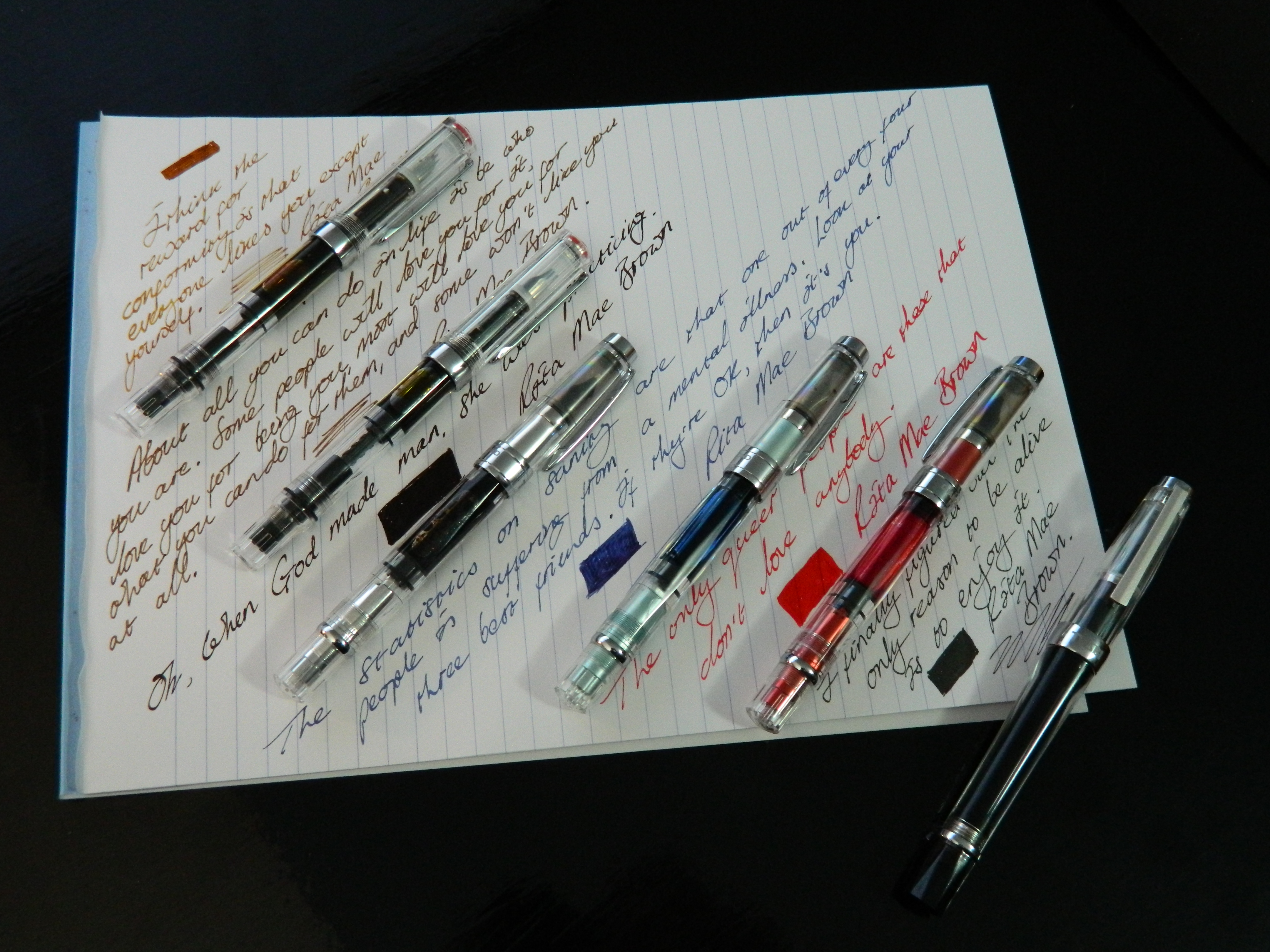 I don’t like demonstrator pens… that’s why I have so many of them now 🙂 . I know it’s strange, I really don’t like demonstrators much, but TWSBI’s Eco, the Diamond 580AL, and now the Vac700R have represented some of the best value for money I have had since I first started buying fountain pens. Routinely, their build quality has been excellent, and their nibs absolutely faultless (which is something you can’t say for many pen manufacturers that charge almost ten times the price for a pen that routinely fails to write—Visconti I’m looking at you, though not you alone).

Because they’ve been so consistently good, I recently added the Vac700R to my collection. Why? Well, let’s not wander down the badly-lit, spiral staircase of self-justification, that way lies pain and misdirection. So let’s just take the pen and lay on Macduff…

The packaging is TWSBI’s usual brown cardboard box, around a plastic case that contains the pen, an instruction booklet, a mini-wrench, some (rather runny) silicone grease, and a couple of O-rings in a plastic bag. 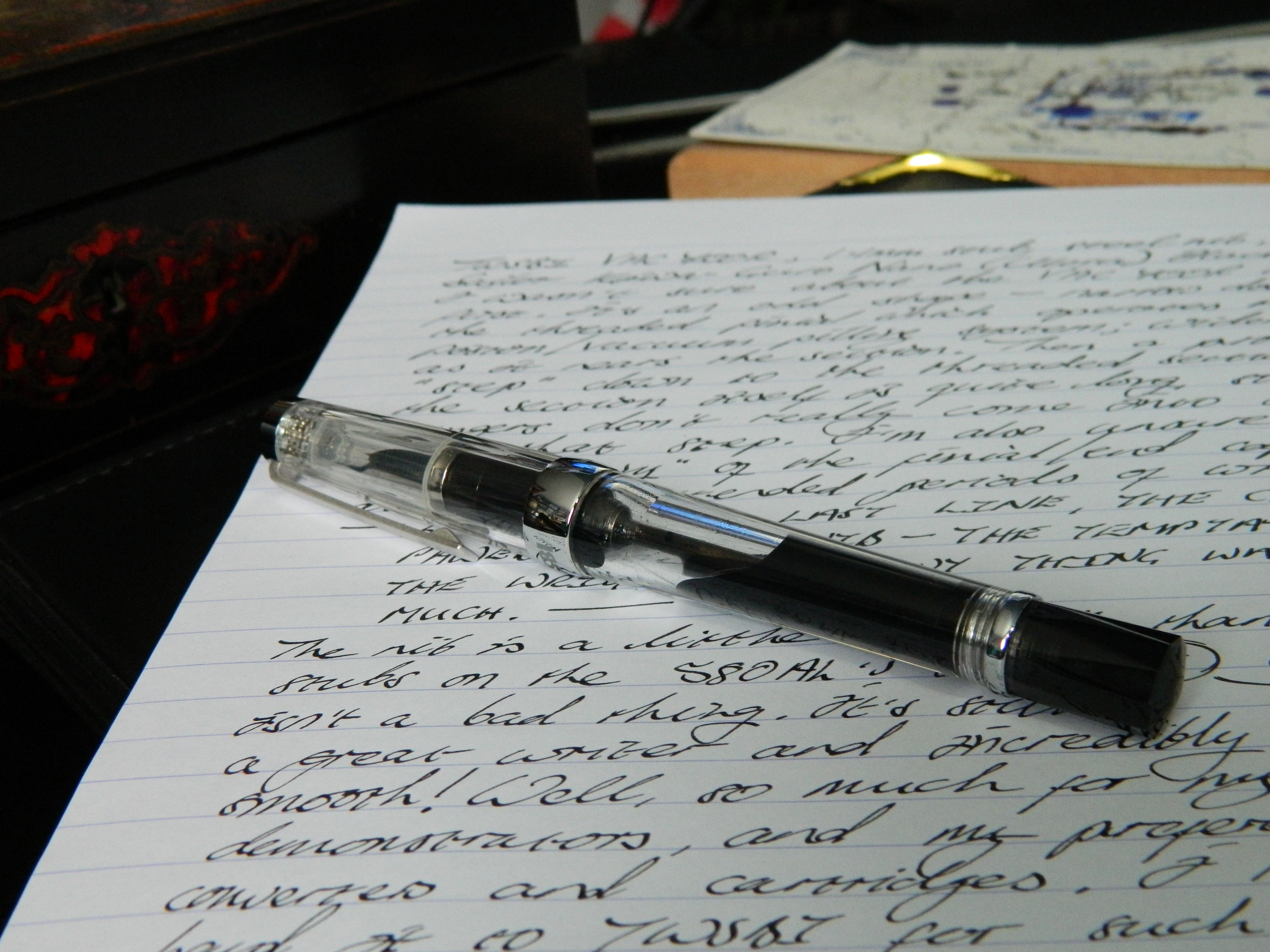 My first impressions, to be honest, were not kind. The Vac700R is the second generation of TWSBI’s popular Vac700, with a few improvements made to the filling mechanism—which uses a vacuum method; I’m getting to that, bear with me. Capped, the pen is about the same size as the Diamond 580AL, a substantial pen, but not a giant. They share a similar cap, with TWSBI’s logo on the top, and a good, strong clip. 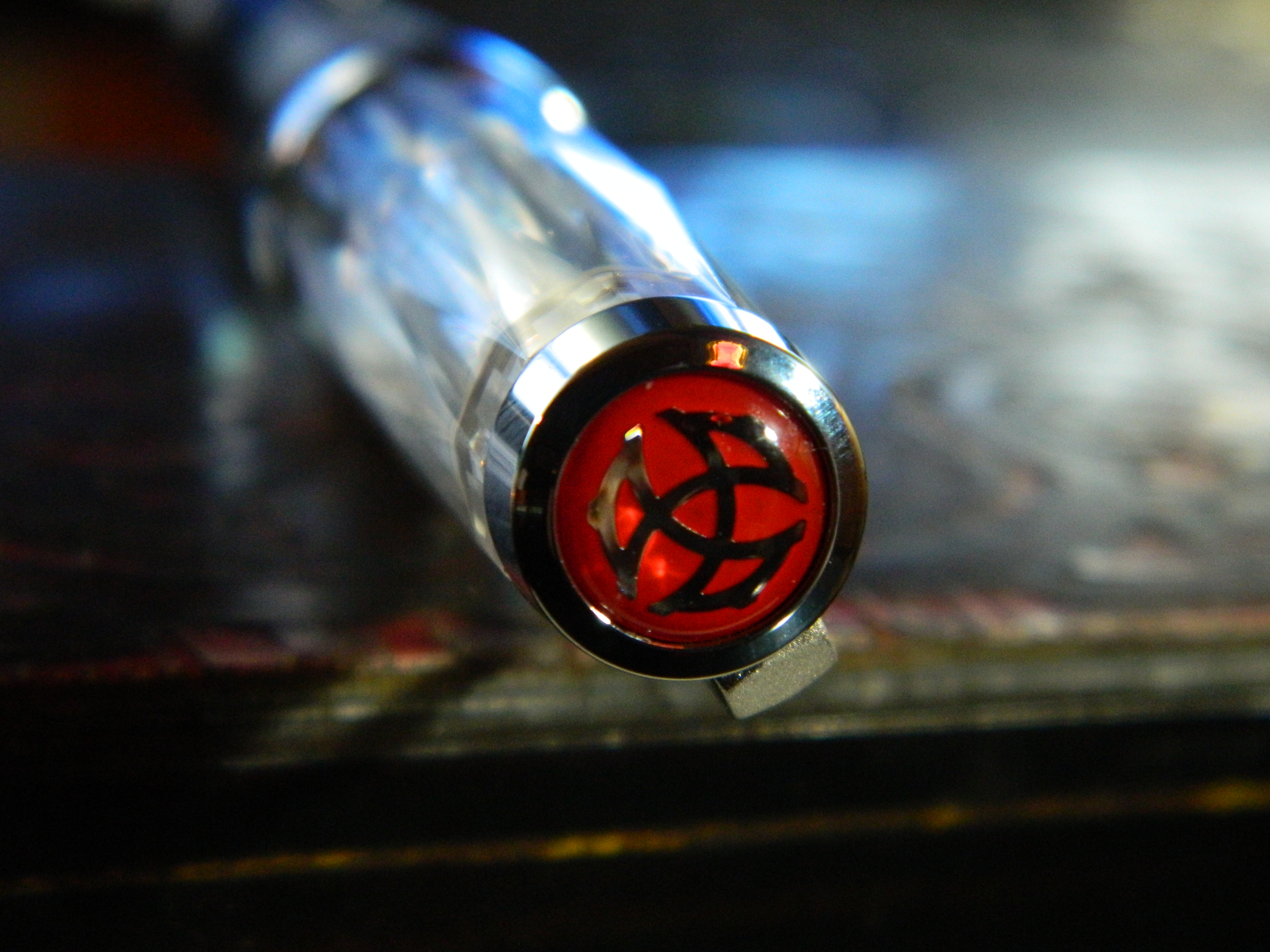 The difference in the cap on the Vac700R is that, where the 580AL is smoothly rounded and tapers toward the end, the Vac700R has a patterned cap, with a rounded silver-colored cap band. The cap band bears the TWSBI brand and model name in the usual subtle lettering. 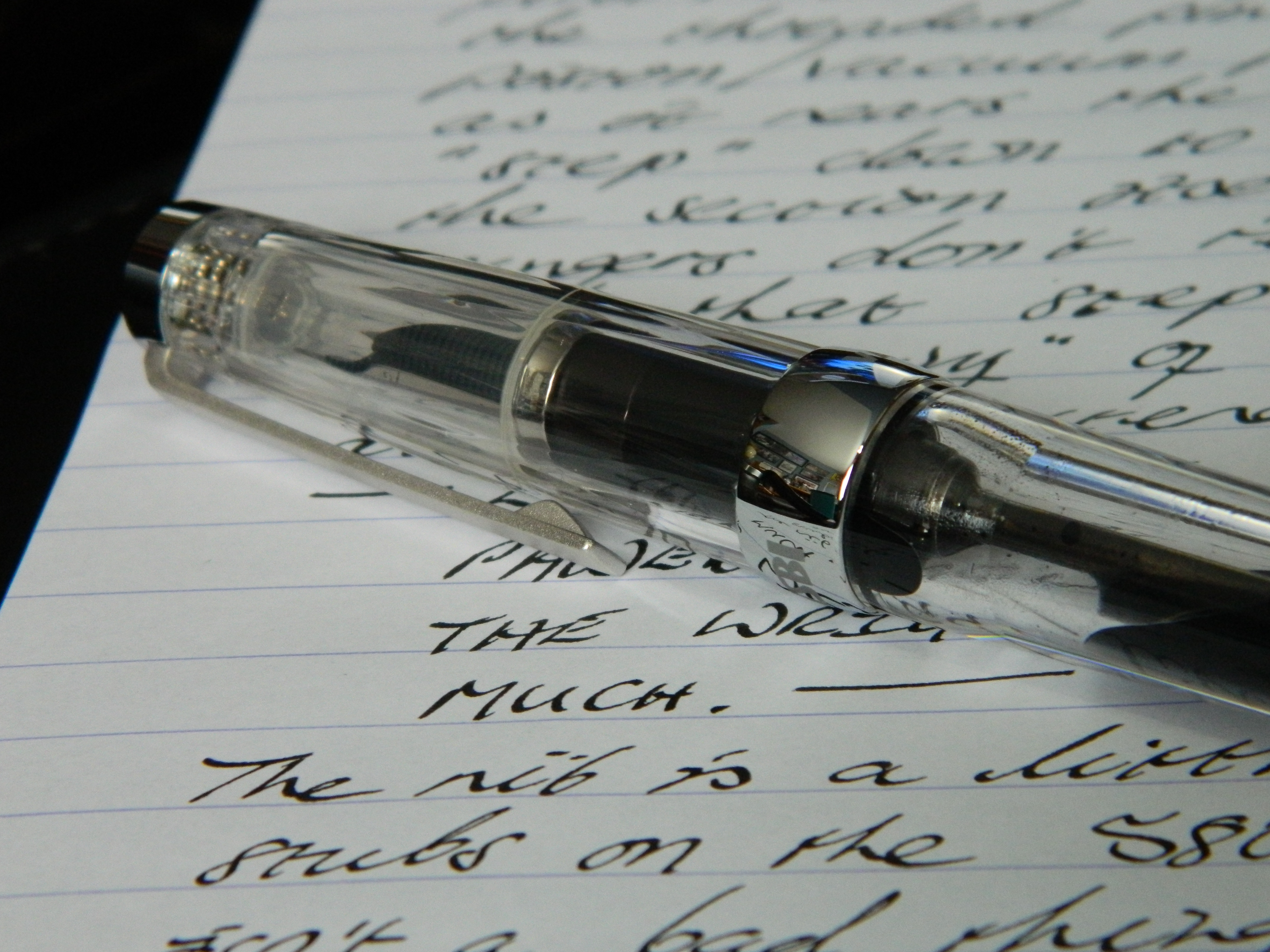 The barrel of the pen widens as it progresses from the piston’s end cap, up to the section and the threads for the cap and clip. This gives the pen a slightly bulbous look about the middle, not too dissimilar from my own. This is probably why I’m not that sure about its aesthetic appeal.

When the cap is removed, the section and threads are revealed, and show a pronounced step from the barrel down to the section. This isn’t anything I can’t ignore, but it definitely needs to be ignored rather than being unnoticeable. 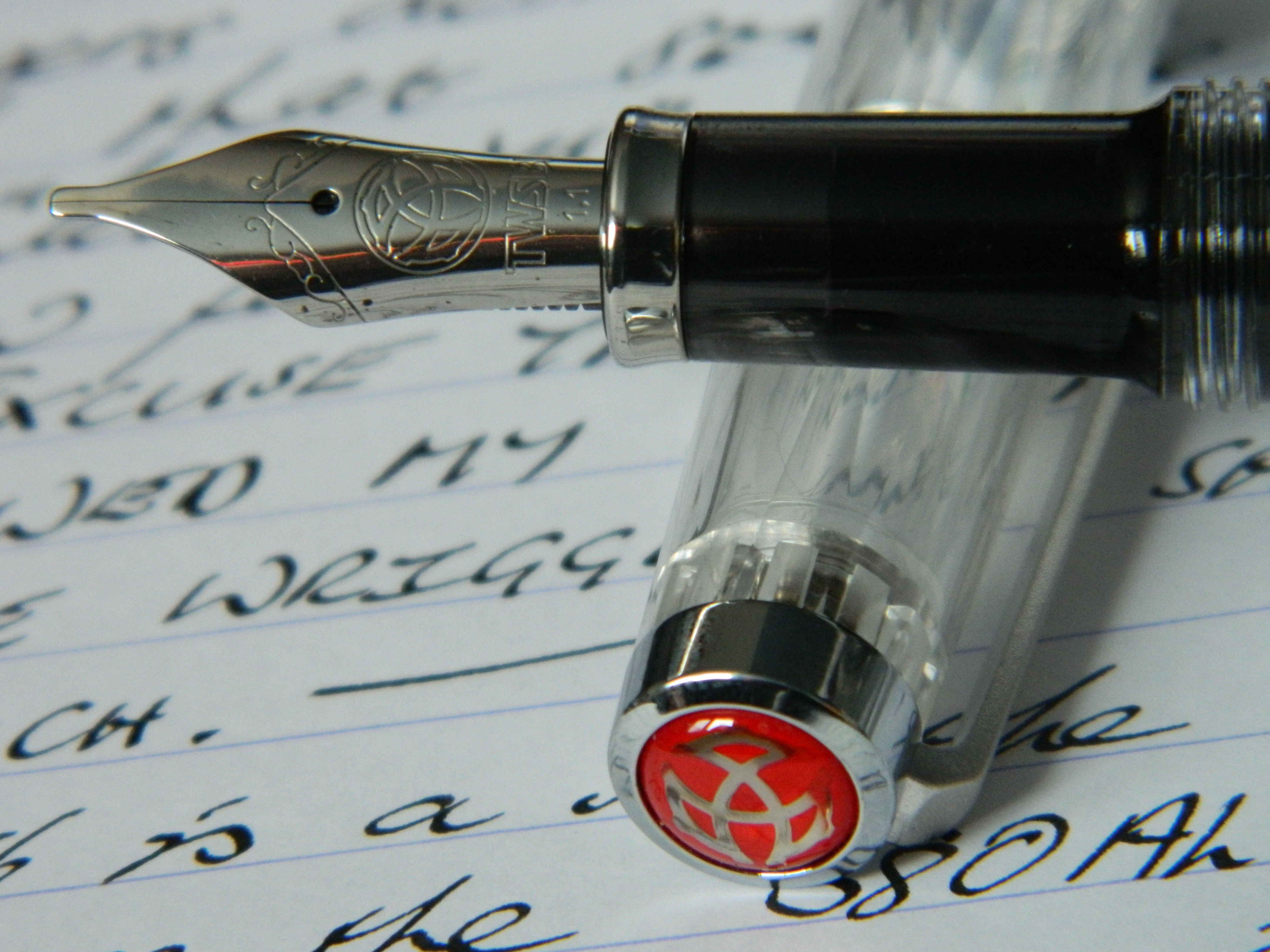 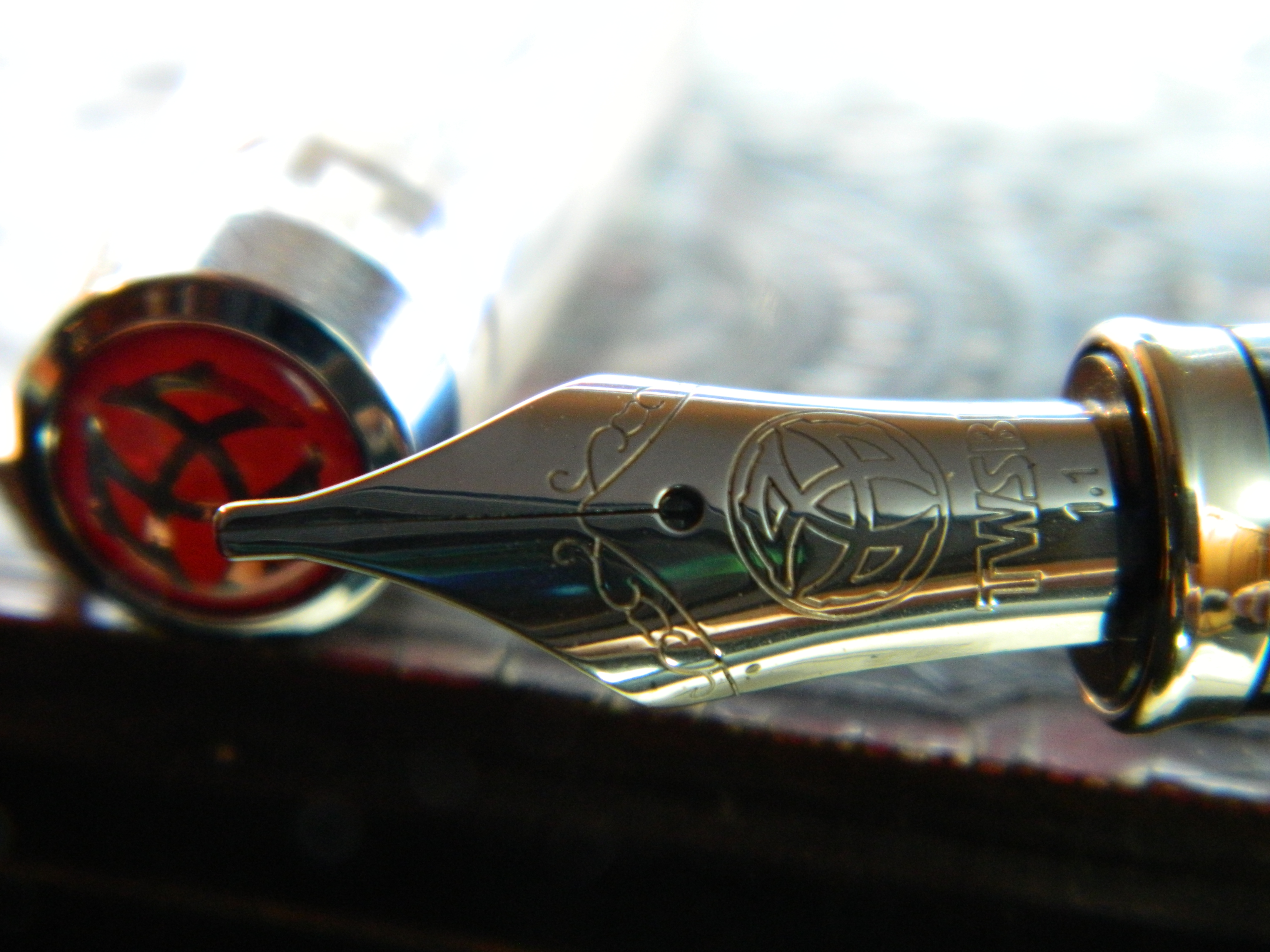 Once again I opted for the 1.1mm stub—a combination which has always been perfect for me from the moment I pull the pen from the box.

Overall, the Vac700R is a chunky, inelegant, pen; but not so lacking in grace that I would dismiss it without first giving it a try. 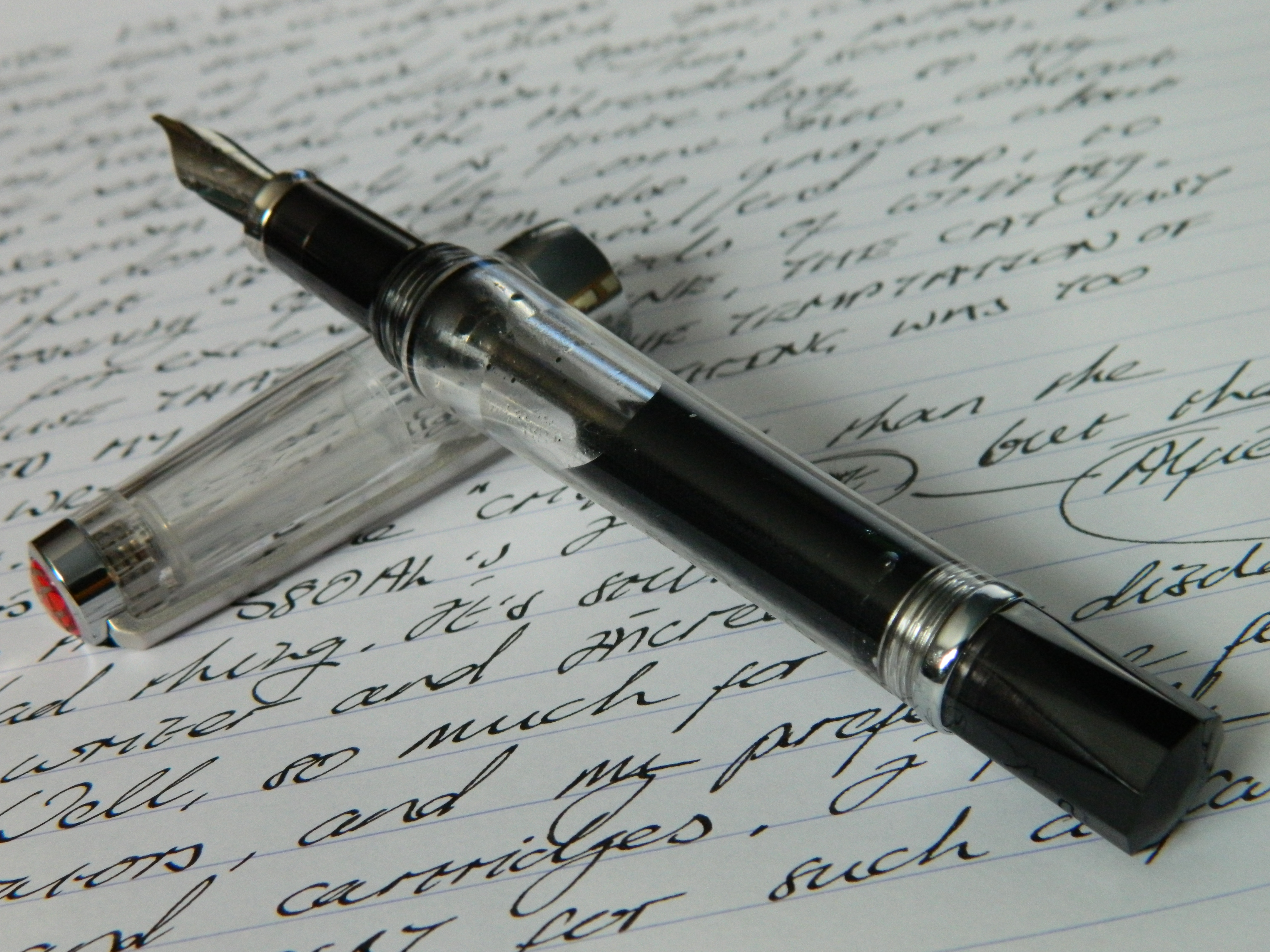 Giving the Vac700R a Try

To do that, you first need to fill the pen, and as I’ve said before, it’s a vacuum filler. What that means is that the shaped knob at the rear end of the pen has to be unscrewed, then pulled out to extend a piston rod (which expels any ink, or air, still in the barrel; so be careful—especially if filling from a very full bottle of ink). The nib is placed in a bottle of ink and the piston depressed. At the last few millimeters of travel for the piston, ink is drawn rapidly into the barrel.

Brian Goulet of Goulet Pens has an excellent video which details the whole filling process, and how to make sure the pen is filled to its—quite exceptional—capacity.

I’ve said it before, Goulet Pens have some of the best fountain pen resources on the web, and should be the first port of call for anybody looking for this sort of information.

Writing with a Vac700R can also be a frustrating process—especially if you haven’t watched Brian Goulet’s next videos. You see, if you screw the piston-knob all the way back up after filling, you will effectively seal the nib section off from the barrel. Thus, the pen will only be able to use the ink left in the section and the nib feed. This is fine for a page or so of text, but anything more, and the pen will just dry up.

Here the piston-knob has been unfastened, but to continue writing, extending the piston a millimeter or two would help the ink-flow.

Once again, Brian Goulet has a wonderful video that provides a full explanation of what’s happening here, and what you have to do to avoid the The TWSBI Vac-Trap…

Which he then follows-up with another video on how to avoid having to do the whole screw/un-screw thing to make the Vac700/Vac700R write for extended periods of time. But, as Brian Goulet goes to great lengths to explain, whilst this last technique shouldn’t cause you any problems, he takes no responsibility for any accidents or voided warranties…

All credit to Brian Goulet and Goulet Pens for these videos, they are nothing short of excellent, and just what a new Vac700R owner needs to get the best out of the pen.

The Vac700R is a very similar size to the Diamond 580AL, with only one major difference. I’ve listed them here for comparison…

The ink capacity in the Vac700R—especially after you have followed Brian Goulet’s instructions for a complete barrel-full of ink—is almost 20% greater than that of the Diamond 580AL. The only way you get a pen that contains significantly more ink than that, is if you eye-dropper fill a large pen like the Edison Collier.

Also, it’s worth noting that, although I’ve listed the measurements for posting the TWSBI Vac700R, given how the piston-knob has to be released for extended periods of writing, and the dangers inherent in an injudicious twist and pull of that piston, it really isn’t advisable to post this pen at all. You have been warned.

In a word, beautifully. Just like all the other TWSBI pens I have ever bought. The nib was just great straight out of the box… as smooth as silk from the first moment. These nibs are easily as smooth as the 14K gold nibs I have had on Platinum #3776s, and make the Lamy 2000’s gold nib look like a bad joke at the expense of my wallet. 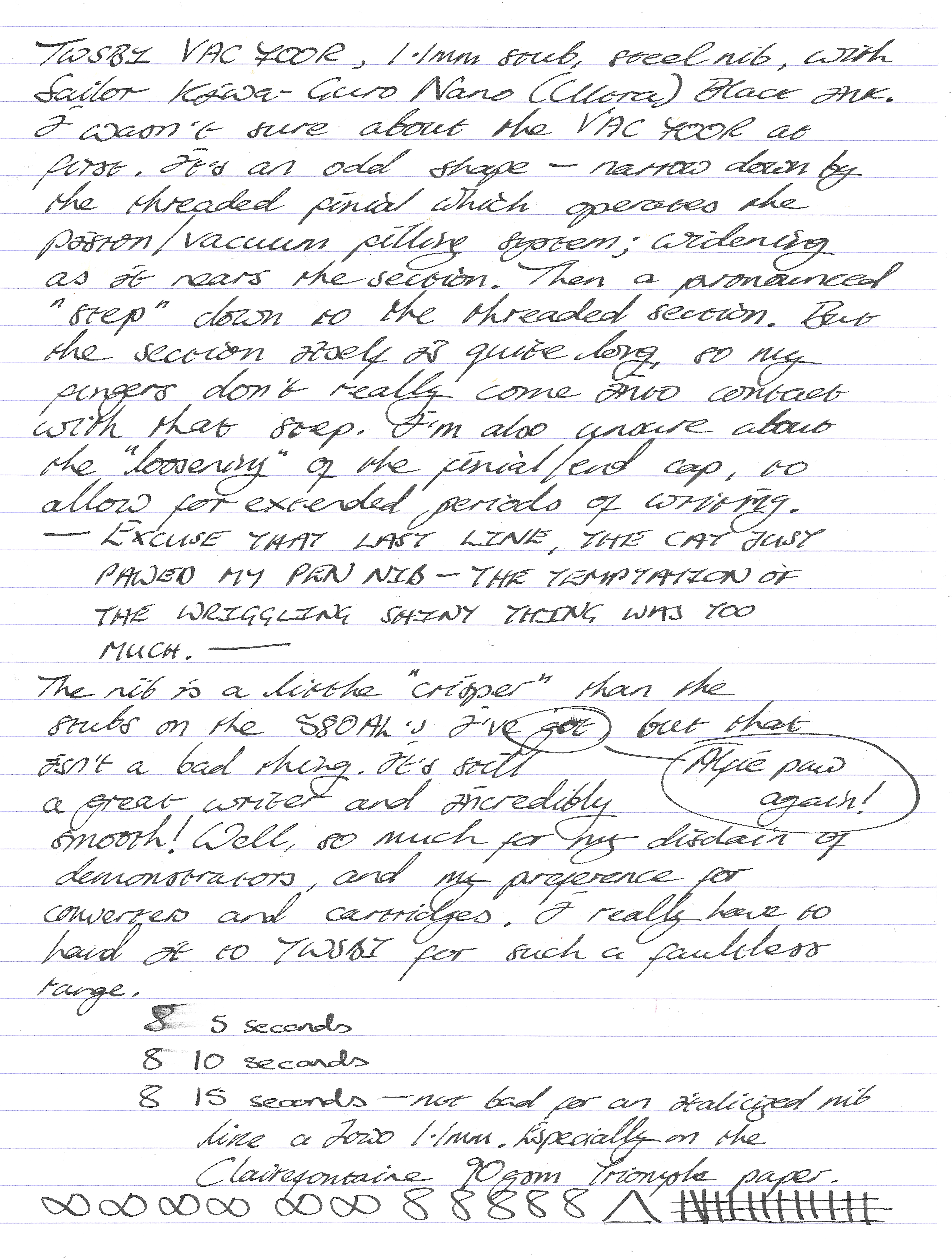 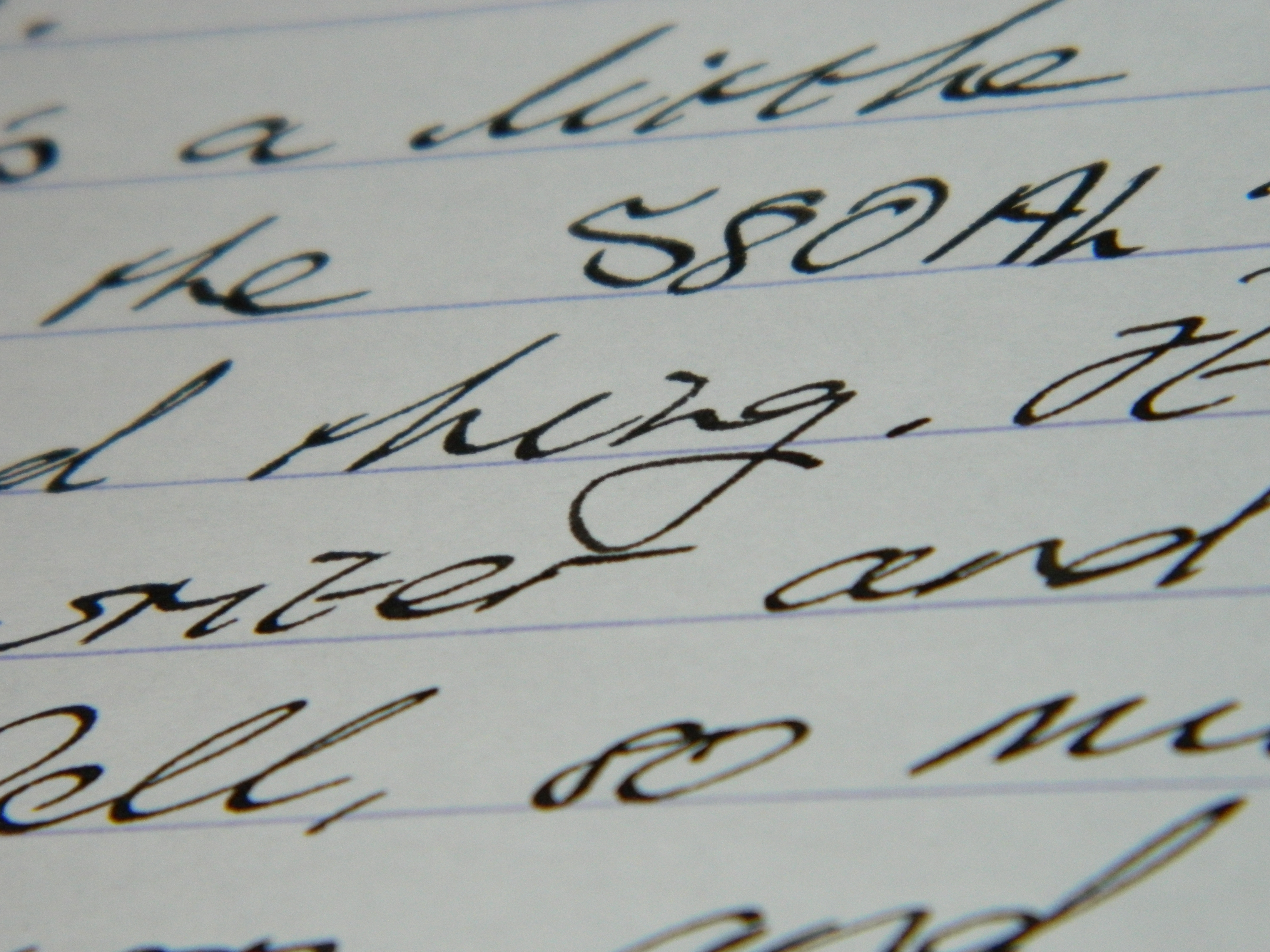 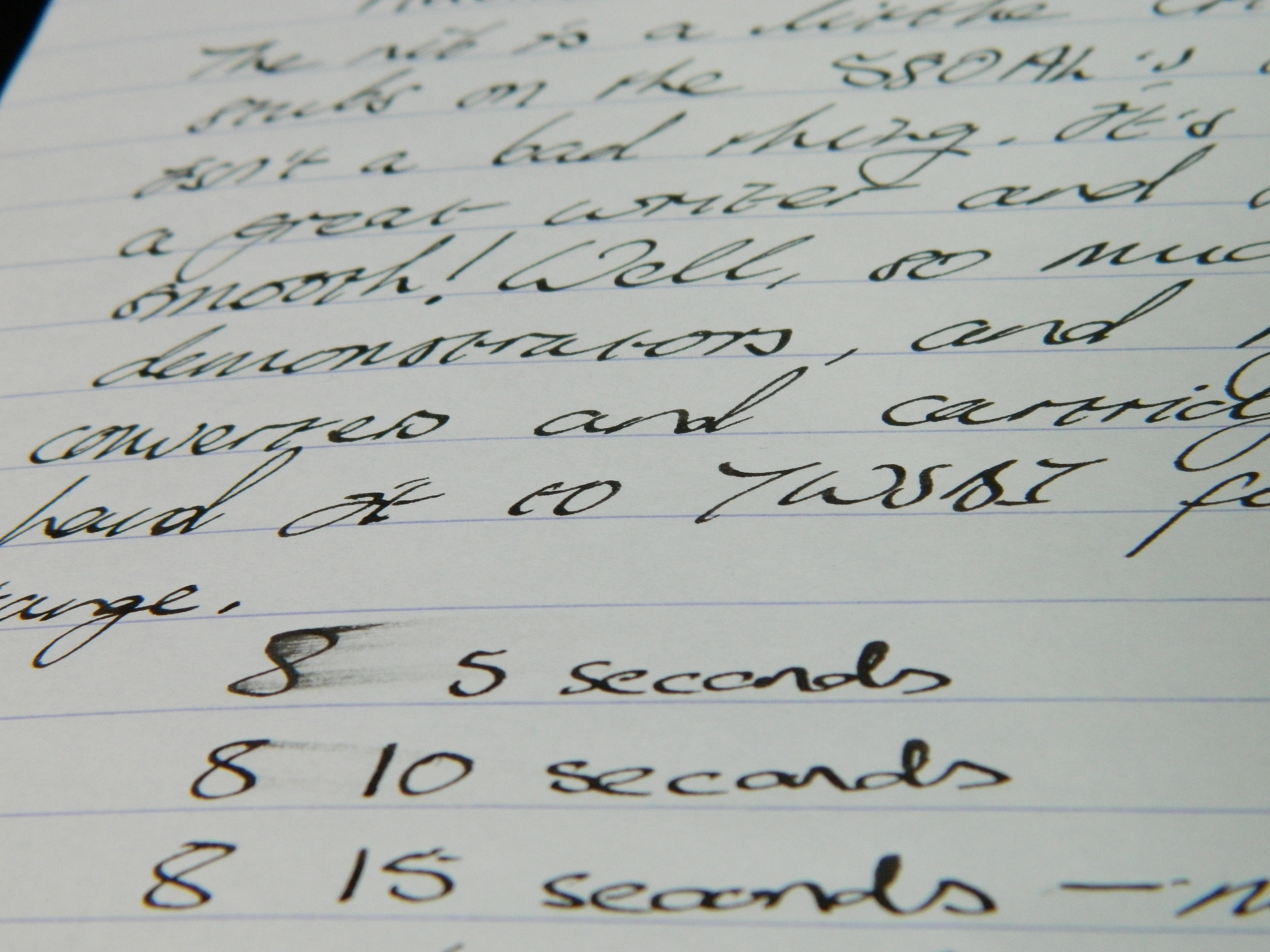 The TWSBI Vac700R is not an elegant pen. It isn’t a pen that will earn you admiring glances in the gym changing room, or wherever you might be waving it around. If mounted on a tank, and paraded past the White House, Kim Jong-il will still think his is better than yours. And of course, there’s always the possibility of accidentally losing your ink at an inopportune moment. At about $95.00 CAD, it’s a couple of dollars more expensive than the TWSBI Diamond 580AL. The Vac700R isn’t going to be a comfortable pen for anyone with small hands, or who cannot grip the smooth barrel pretty firmly. You also have to be rather dexterous to be able to get the most from its vacuum-filling mechanism (see those videos above).

So, for all that, I could not in due conscience, recommend it over and above the cheaper, better looking, and (in my opinion) marginally better performing Diamond 580AL. But that doesn’t mean that it’s not a great pen. It has (mostly) everything going for it that the Diamond 580AL has, plus a huge ink capacity if that is what you need. Personally, I’d go for the Diamond 580AL though, and I’d maybe even wait and see what new and interesting colors TWSBI decide to push out the door this year.