It’s been a strange week here. Firstly, my wife had an accident at a conference in Ottawa (ice-rain + sidewalks = experience to be avoided), which aggravated an existing back problem and meant she wound up in bed for more than a week (a nightmare for Mrs. I Will Do Everything With No Help From Anyone). Plus, she was on a cornucopia of little, blue morphine tablets and anti-inflammatories from our family doctor.

Which (by the way) cost us ten bucks in total—don’t let anybody (especially the current moral, ethical, and humanitarian nightmare in the Whitehouse), tell you that the national health services in Canada and the UK are a bad idea. The Canadian one saved our bacon, and eased a lot of pain this week.

On the basis that she was a danger both to herself, and the little pink alien rabbits, that kept sitting on the ceiling and singing Bob Dylan songs, I’ve been on-call and away from my desk quite a bit. She’s on the mend now, the alien rabbits have disappeared, but I have caught her singing The Times They Are a-Changin’ to herself on several occasions. Which means I’ve been able to get back to my desk, and a post I never really thought I would make.

It seems that I haven’t written anything, not one, solitary thing, with any of my fountain pens for almost 12 days. My favorites were all inked, and stored—nibs pointing to the ceiling—in good cases, and left completely undisturbed. Which meant—it occurred to the scientist in me—that I was in a position to try a bit of an experiment. How would they all compare when asked to write after a week’s inactivity? Would there be any issues? We’ve all read the reviews of a few pages of text, and seen the photo’s, but how do these pens face up to a bit of real-world use and abuse? 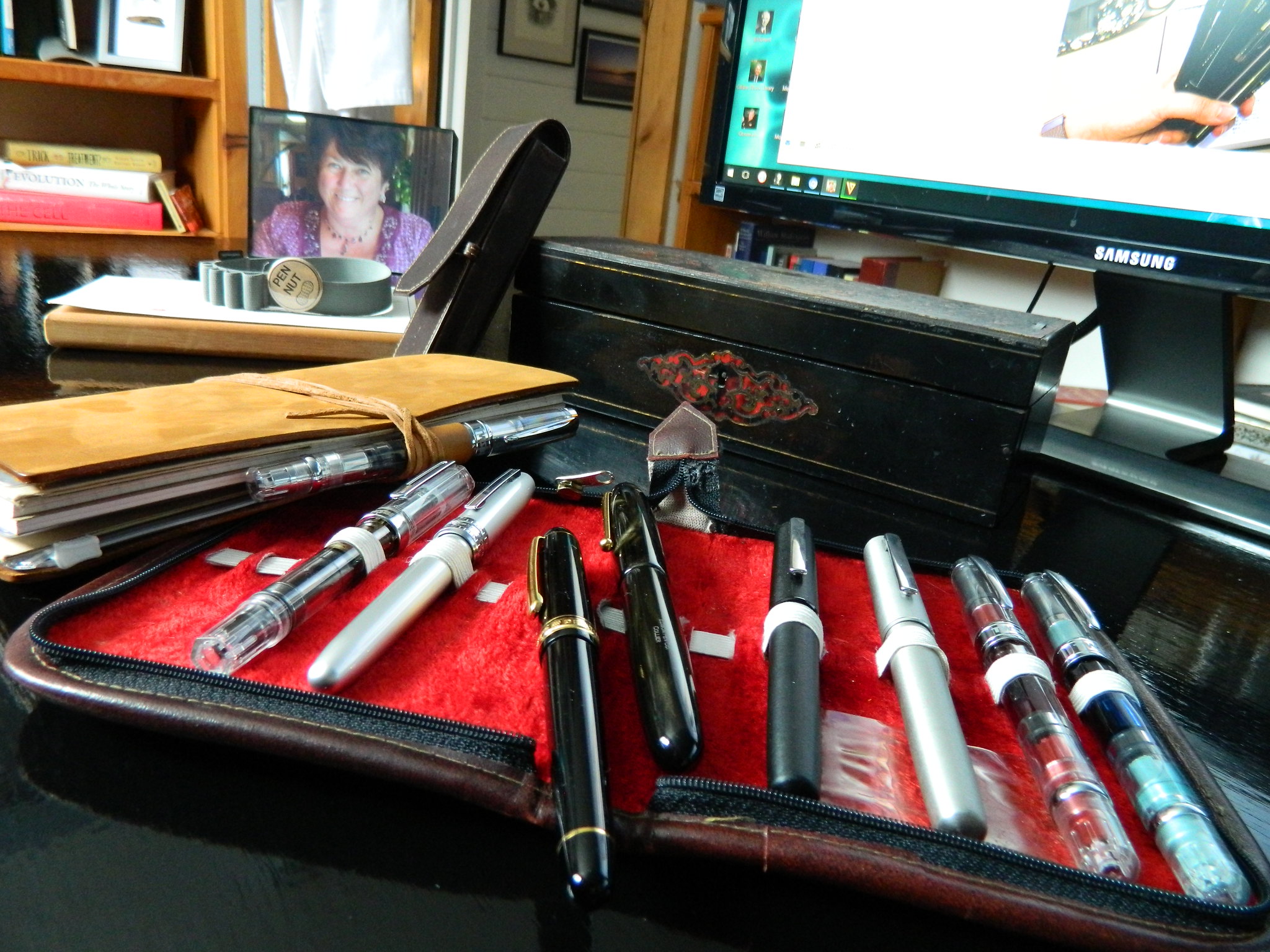 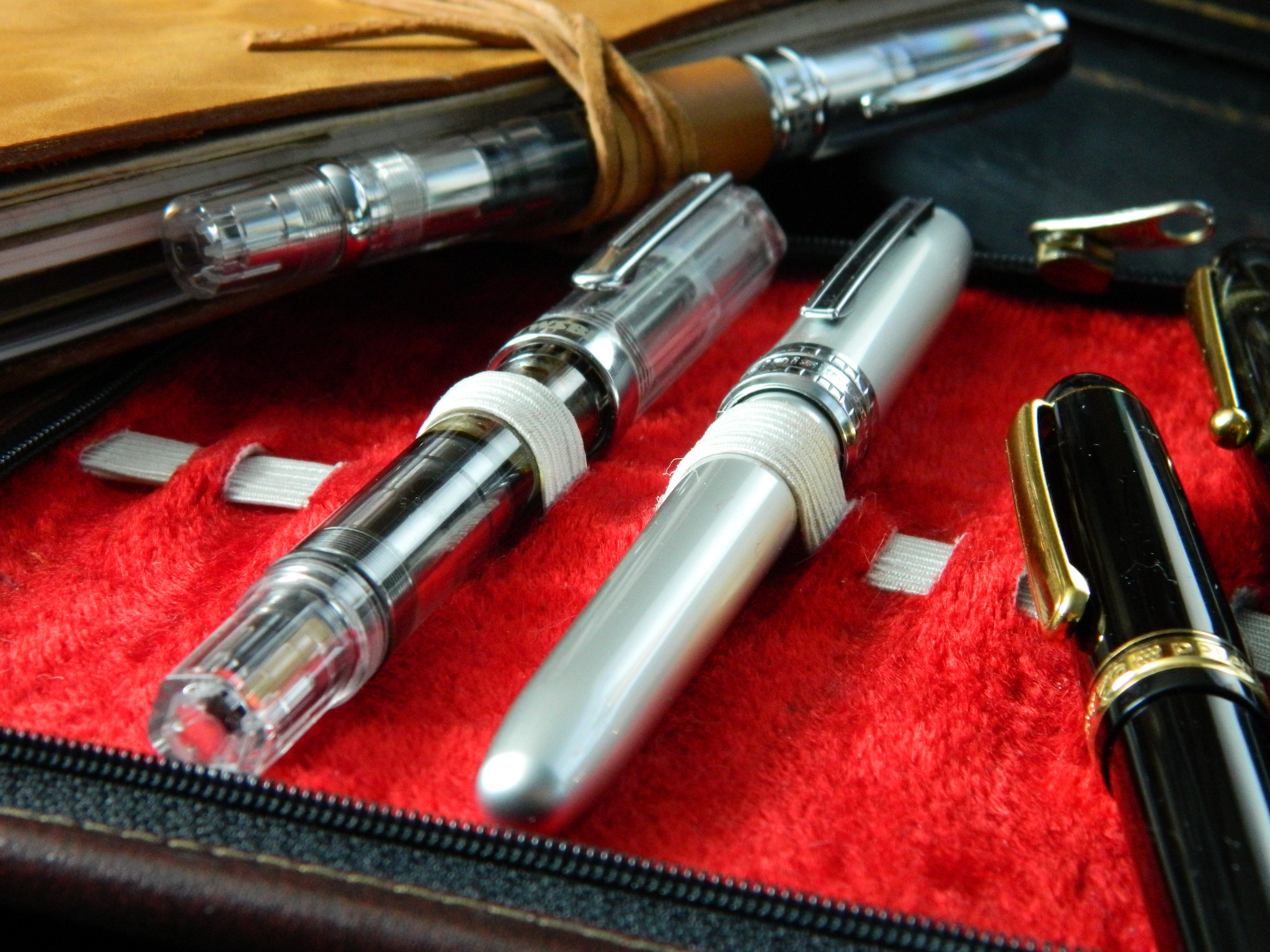 I carry the TWSBI Diamond 580AL (silver, 1.1mm stub) everywhere I go. It’s clipped to my Traveler’s Notebook, and has simply never let me down. 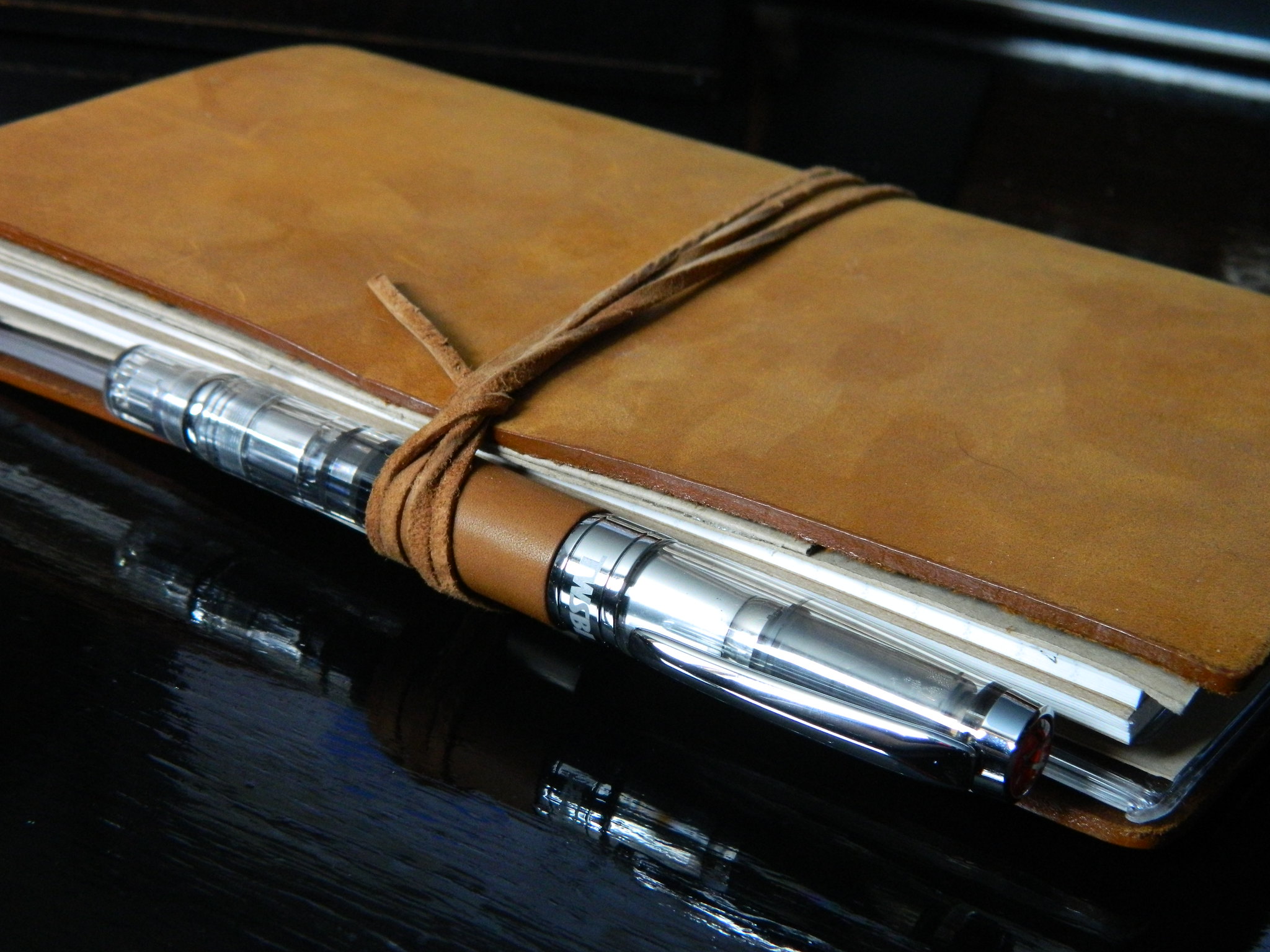 It’s been beautifully smooth, and completely reliable straight out of the box. This occasion was no exception. After about 12 days of complete inactivity, this pen never hesitated. I put nib to paper and it wrote with no hard start or skipping; utterly reliable. I keep it inked with the same ink that I use in my Edison Collier, they both have a Jowo #6 1.1mm stub nib, and make perfect backup pens for each other, in case of a writing emergency.

The TWSBI Eco (clear demonstrator, broad nib) with the Noodler’s brown, is another completely reliable writer. I don’t use this pen every day. It’s my only western broad nib, but I love the Noodler’s Golden Brown ink, so I keep it inked with that, for writing on some of my favorite ivory paper (mostly Life brand), because I love the combination. The nib is simply excellent for the price point (and for higher price points too). Performance matches the nib, and there were no hard starts or skipping. Twelve days of lying idle, and neither of the TWSBIs let me down.

The same can be said for the Platinum Plaisir (silver, fine nib) from Pen Chalet, that I reviewed a couple of weeks ago. Although this is equipped with the same slip and seal mechanism found in many of the Platinum brand pens, so it should be good for a few days out of action, this is not an expensive pen, and I didn’t know how it would behave. Not to worry though, it was as faultless as its much more expensive cousin… 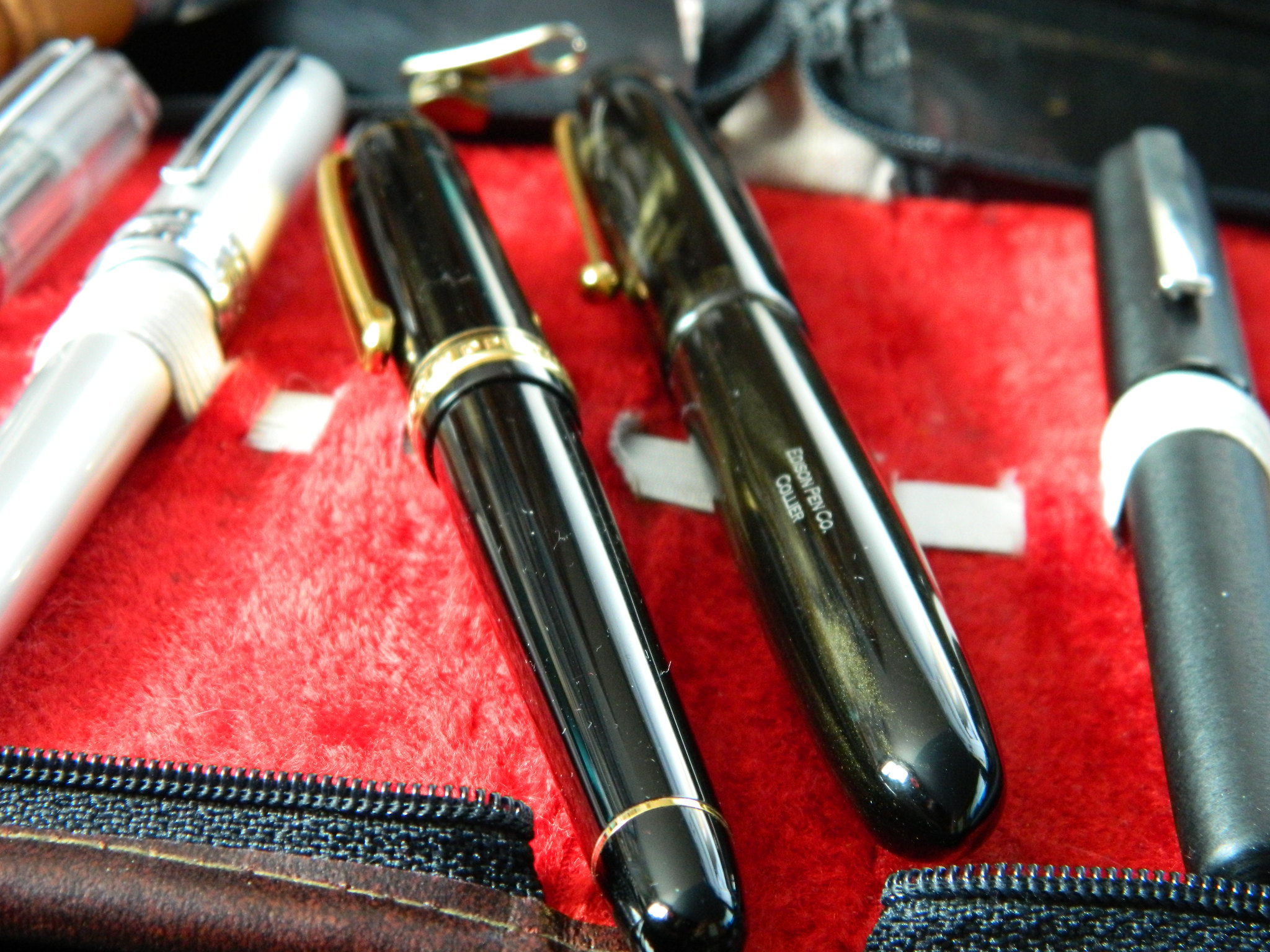 This week, the Sailor 1911L took a back seat, since it was packaged up and sent off to the amazing Mr. Mike Masuyama at MikeItWork, for a custom nib grind… more on that when it comes back.

In its place, was the almost as good Platinum Century #3776 (14k gold, medium nub). I keep this pen alongside my current favorite, the Edison Collier. I carry them seperately from my other pens, in a two-pen Fanklin-Christoph leather case. 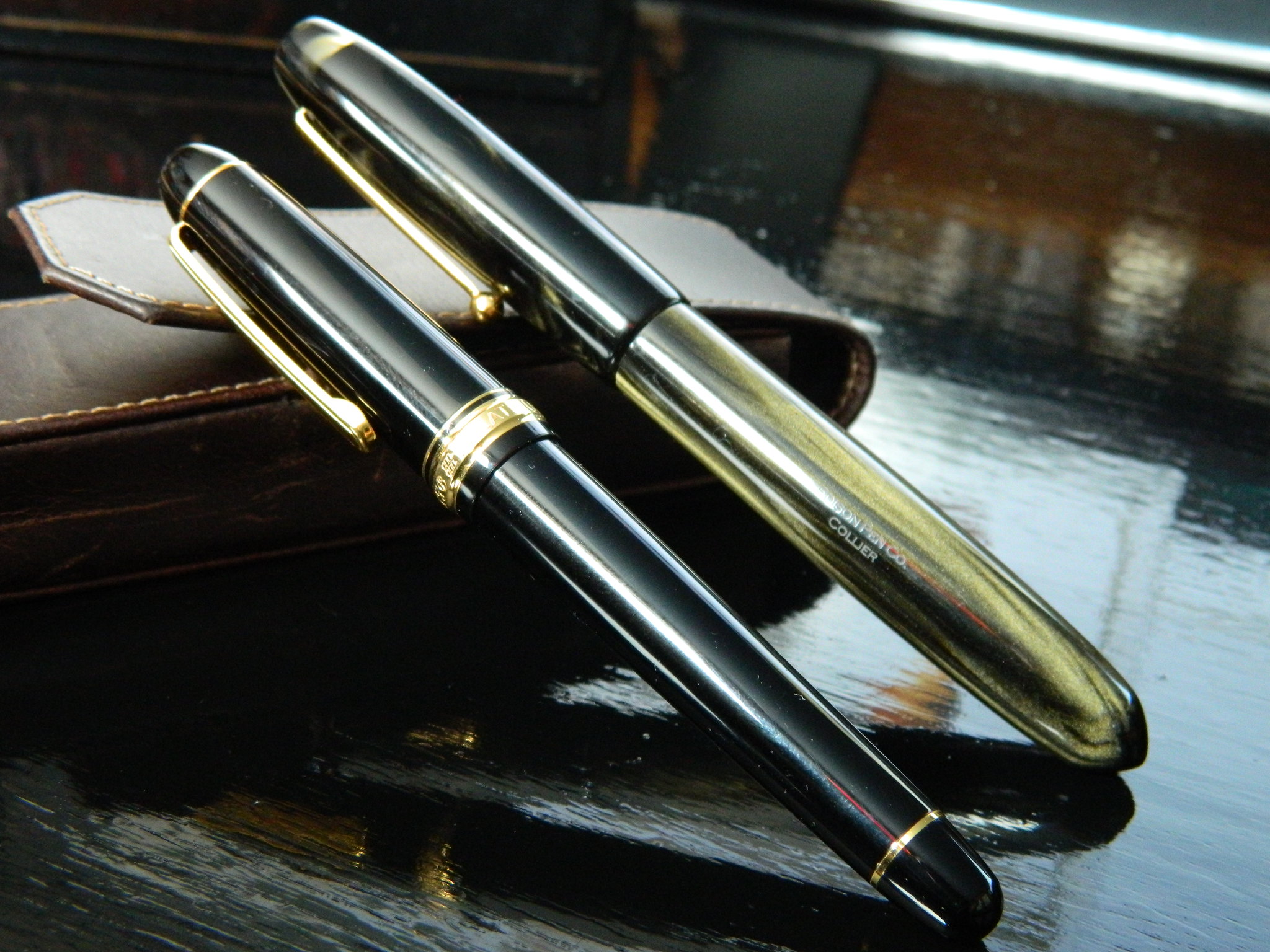 This lets me carry them in a jacket or bag, or just sit them on a desktop, and still have the two always at hand. They have both been beautiful writers since the first day I got them. The Edison however, required just a little encouragement to start up after its sojourn. But only for the first stroke of an uppercase letter. After that, it was business as usual—and it’s worth noting that I keep this pen eye-dropper filled. This—you might imagine—could reasonably be expected to lead to one or two ink-flow issues, but I have to report that it has never given me any cause for concern; or any wish to go back to a cartridge/converter fill. 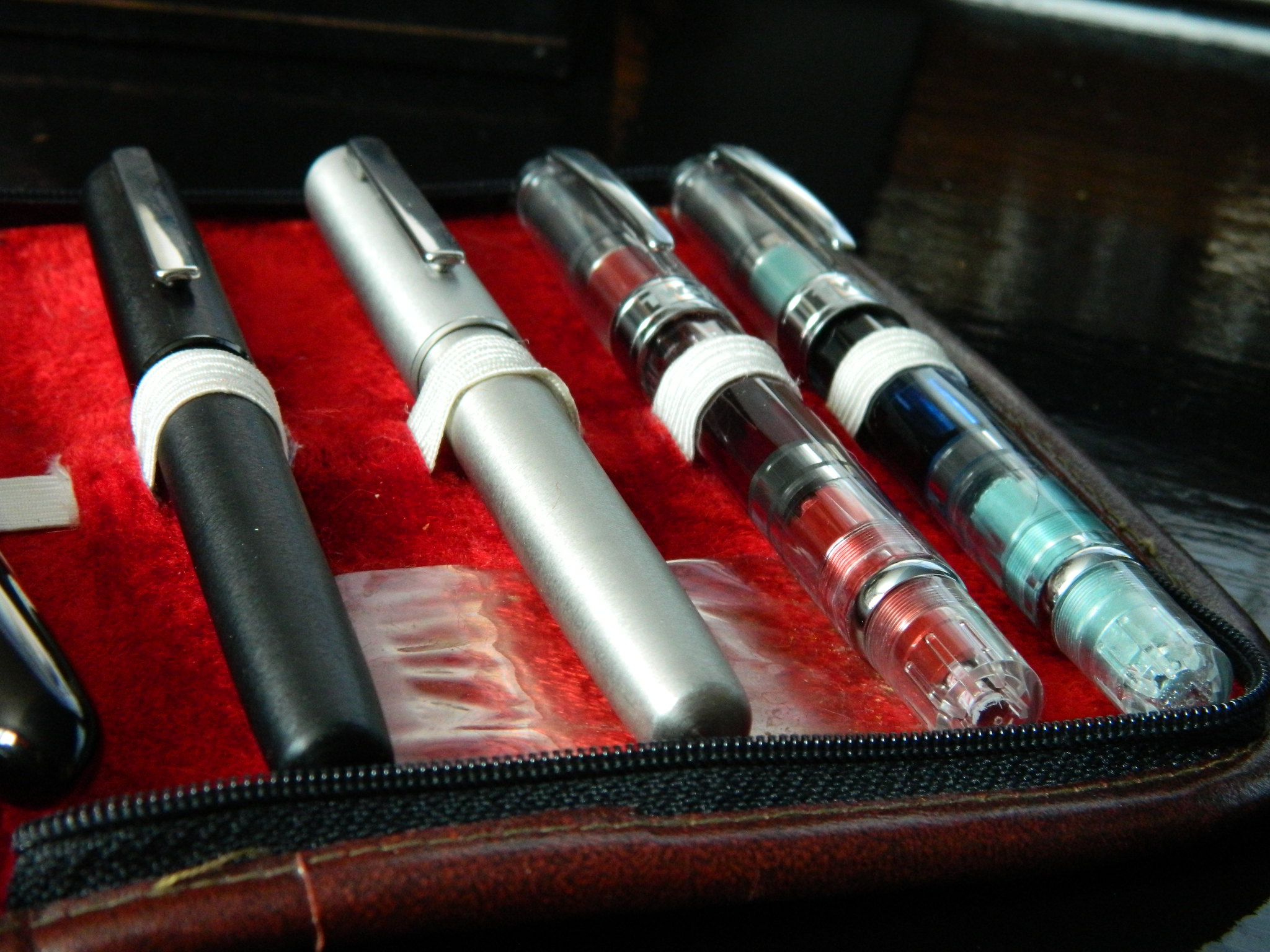 The two Lamy Aions, both with medium steel nibs behaved as you might expect twins to behave—identical. In long-term use, the black and silver models alike have been prone to the occasional hard start (nothing substantial, but just enough to irritate), and even the odd skip (again, just enough to annoy). I like these pens, and they write very well (mostly) and smoothly; but if you’re using them for several A4ish pages of text, then you can expect them to skip at least once. It’s not enough of a problem to make me get rid of them, because in all other respects, they’re great. Even the hard starts and the skipping, don’t amount to very much, but they do happen. And that alone will probably mean that, when my next pen arrives (yes, there is a next pen on the way), they might well be relegated to the Bottom Drawer of Darkness for a while.

I think my old pen case is worth mentioning, since it isn’t. A pen case that is, or rather, was never intended to be. It started life as a case for my first dissection kit when I did my undergraduate degree in Zoology at King’s College London in the 1990s. 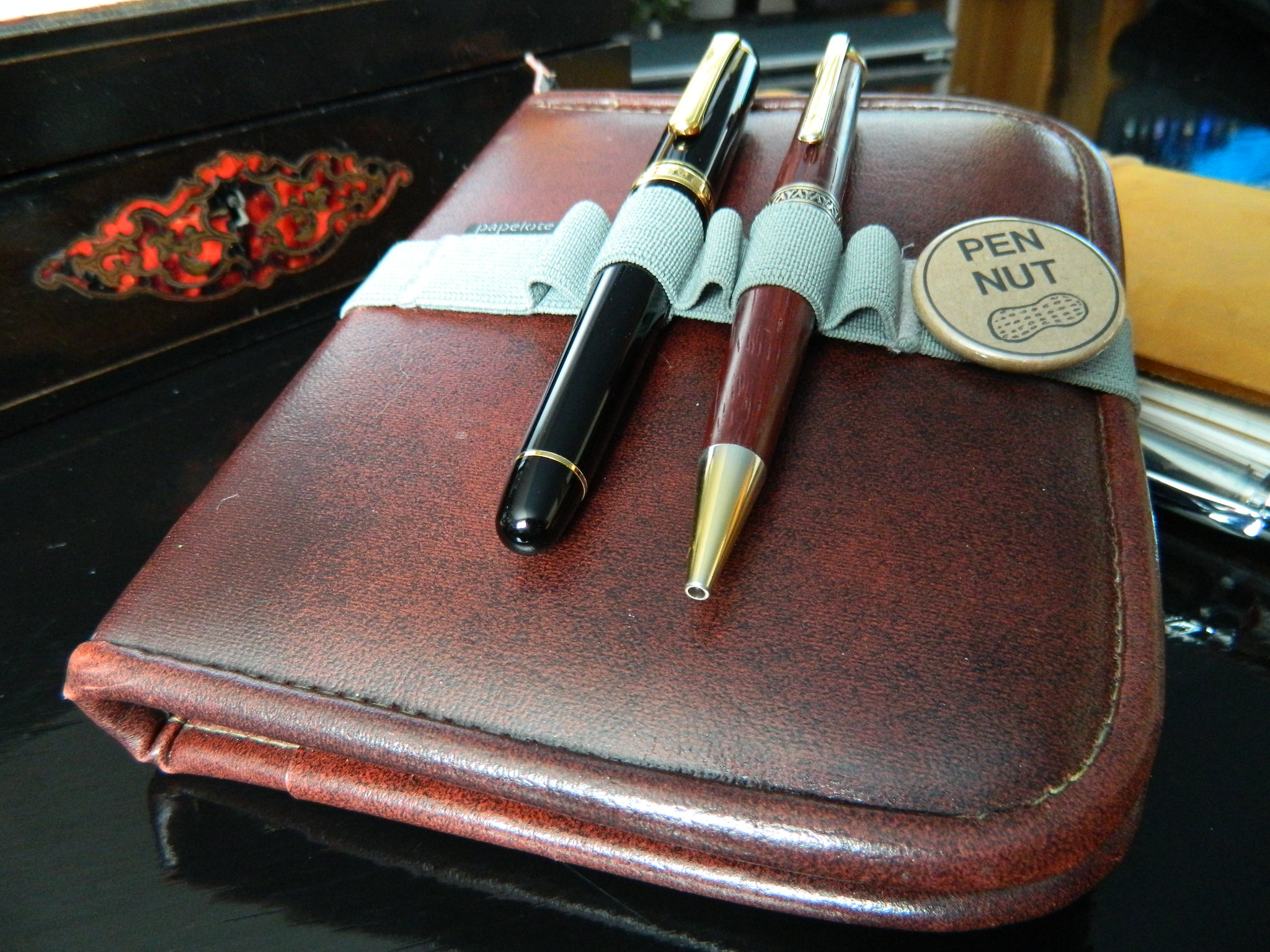 It was bought for me by my incredibly inteligent, biochemist-by-training, but international-businesswoman by eventual career, paternal aunt, Pamela Turnbull; who I’m sure, would be extremely glad to see it still in use if she were still with us.

It doesn’t make a great pen case, the elastic is a bit worn and has been repaired in places, and it doesn’t fully protect the pens from knocking against each other, but I’m going to damn well carry on using it as long as I can. Thank you Aunty Pam—I’m sill looking after it!

I reviewed the Franklin-Christoph, two-pen case in June of 2017, and I’ve used this case every day since. It has weathered well, protects my favorite pens admirably, and looks better daily (entirely like I do not). I really cannot recommend this particular product highly enough, it’s great value for money at only about $40.00 US from the Franklin-Christoph web site, and looks great. 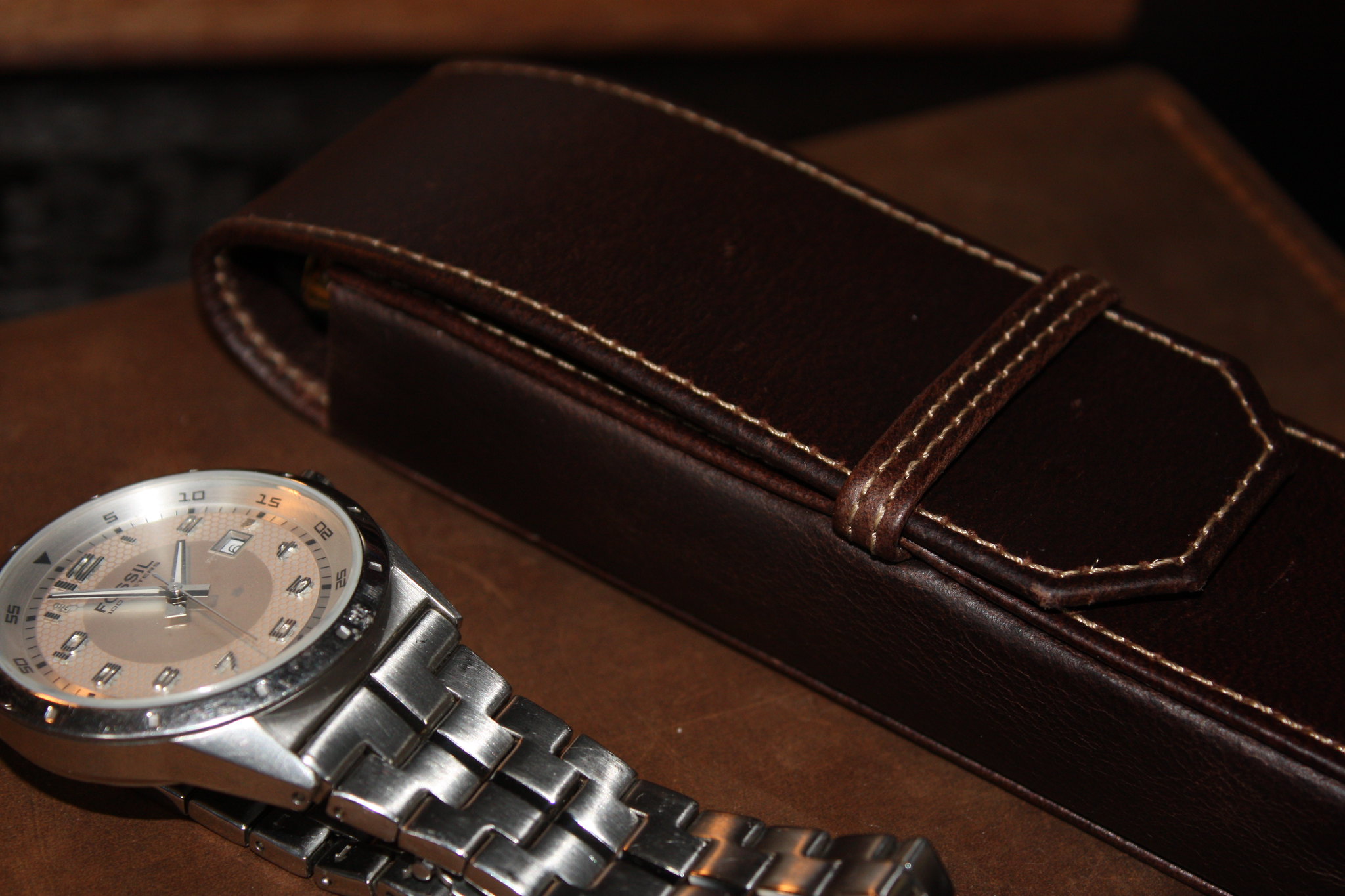 As a scientific experiment, I have to admit this lacks a bit in protocol. But as an observation? Subjective experience confirms the data… the Aions, whilst (for the most part are) nice writers have some faults in long-term use and abuse. The two that I own have shown some hard starts and skipping that, whilst not a major problem, are still irritating. The Lamy’s are good pens, but simply don’t match the Edison, the Platinums (even the Plaisir), or the TWSBIs (Eco and 580ALs), in real-world usage over time. 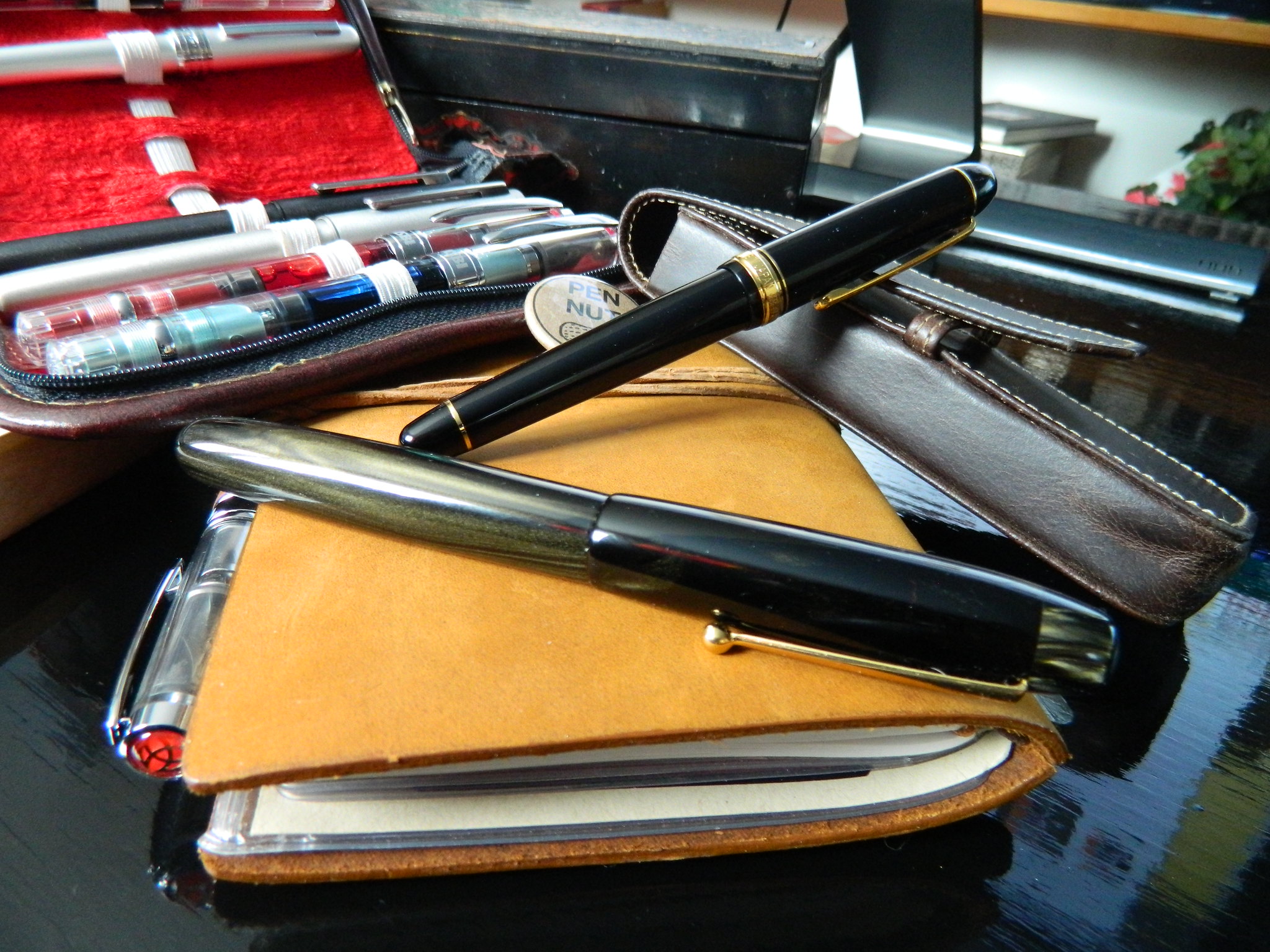