Well, you know you’ve hit the big time as a pen and stationery blogger when you can start your post, “[Insert big time pen retailer here] sent me this pen to review…” And a little while ago, a nice guy from the US retailer Pen Chalet reached out and asked if I would like to review a pen or some ink for them.

I’d like to say I was extremely cool about it all, but nah, not really. I e-mailed them back in less than ten seconds, with a resounding, “Yes! Yes! Great idea!” The conversation rapidly boiled down to what they would like to send me. I figured, quite rightly as it turned out, that nobody in their right mind was going to send me a grands’ worth of pen right off the bat.

The Pen Chalet guy suggested some ink… “You know I’m in Canada, and it’s mid-winter yeah?” He didn’t; I mean, he knew it was January, but not that I was in the frozen wastes of Ontario. He was still interested though, “We have some freeze-resistant ink.” He suggested helpfully. I wasn’t really in a position to be quite as helpful, “It was about minus thirty-five Celsius here last week.” Right, there’s freeze-resistant, and then there’s if your car’s older than 2007, you might as well take the bus, ’cause that aint startin’. We decided on a pen, and a few days later I received a very shiny, new Platinum Plaisir, in silver, with a fine steel nib. Thank you Pen Chalet, this is so cool. 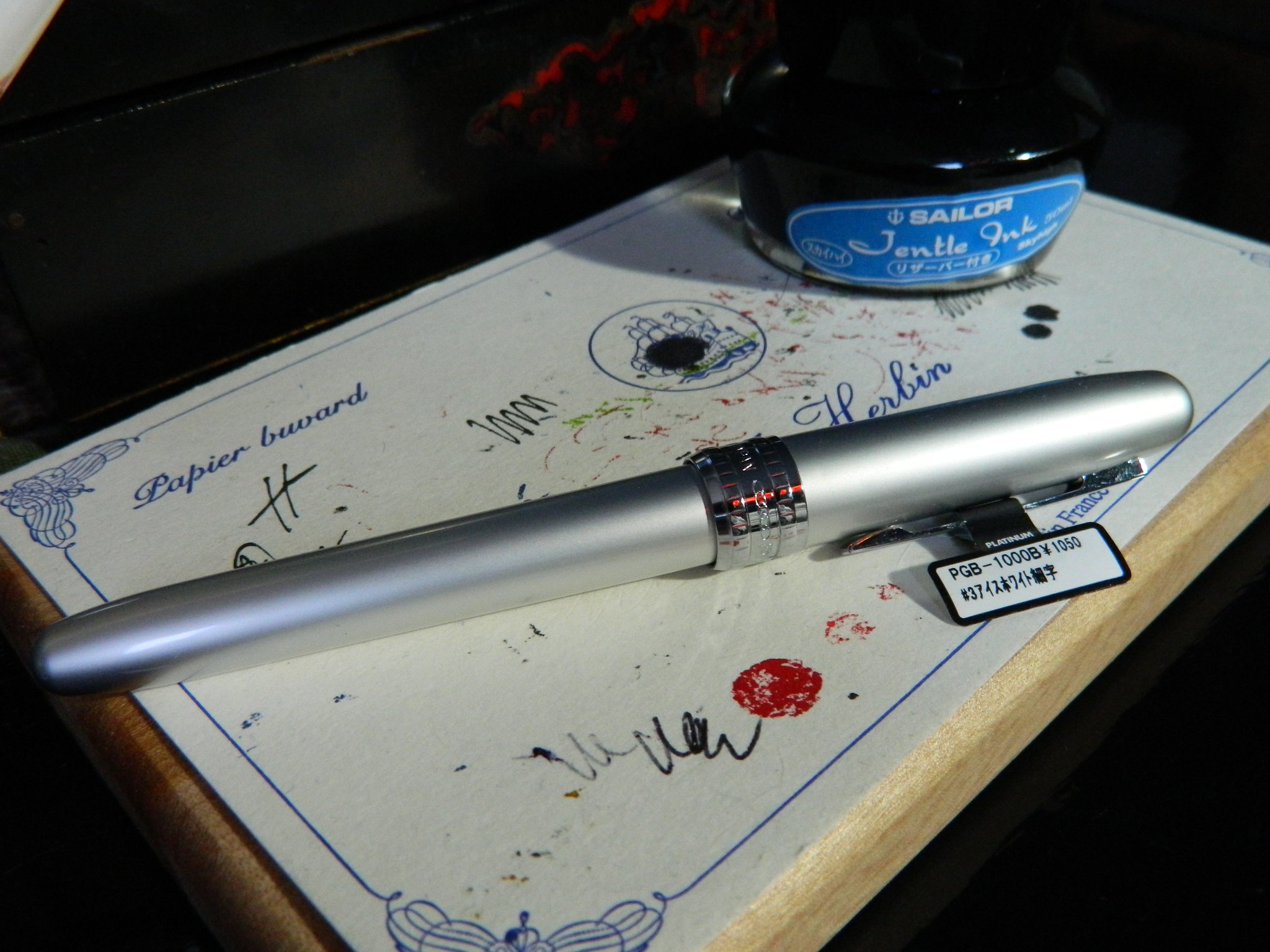 I was quite keen to get my hands on the latest iteration of Platinum’s Plaisir, since I had heard that—in the seven months or so since I had last reviewed the Gun-Metal, medium nib variant—Platinum had been making some minor adjustments. 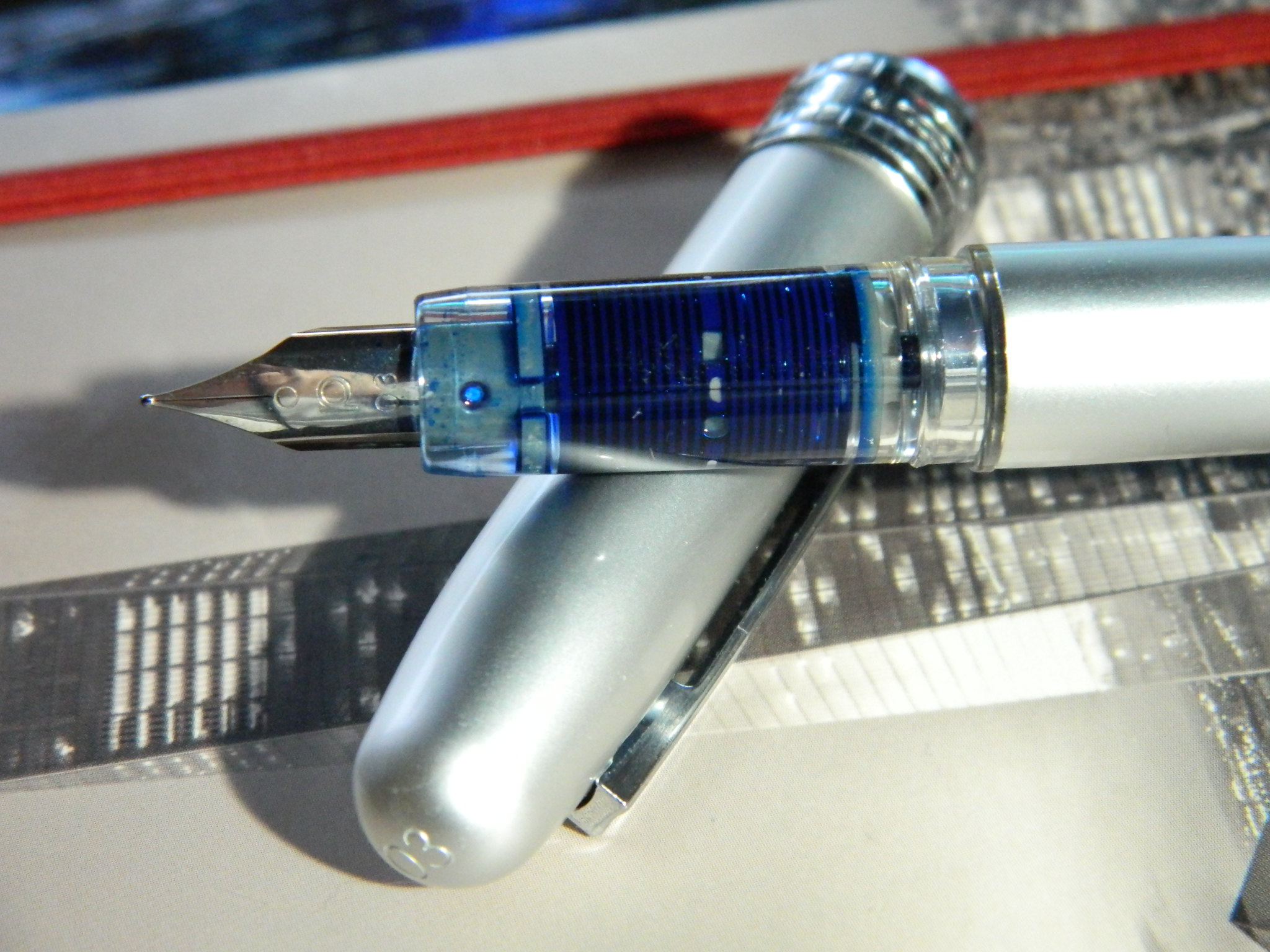 Nothing immediately jumped out at me as startlingly different from my first review. This is still a nice budget pen. The Plaisir has a lightweight aluminium barrel and cap, with a transparent section that displays your ink color and level. If, like me, you try and match your ink to the pen color, then you’re in luck. The Plaisir comes in the following colors: black, blue (a kind of mid/dark), frosty blue (a light blue), gold (shiny), green, gun metal, ice white, nova orange (put your shades on before taking this one out), pink, red, and violet. So if there’s nothing in that lot that appeals to you, you’re a hard person to please. 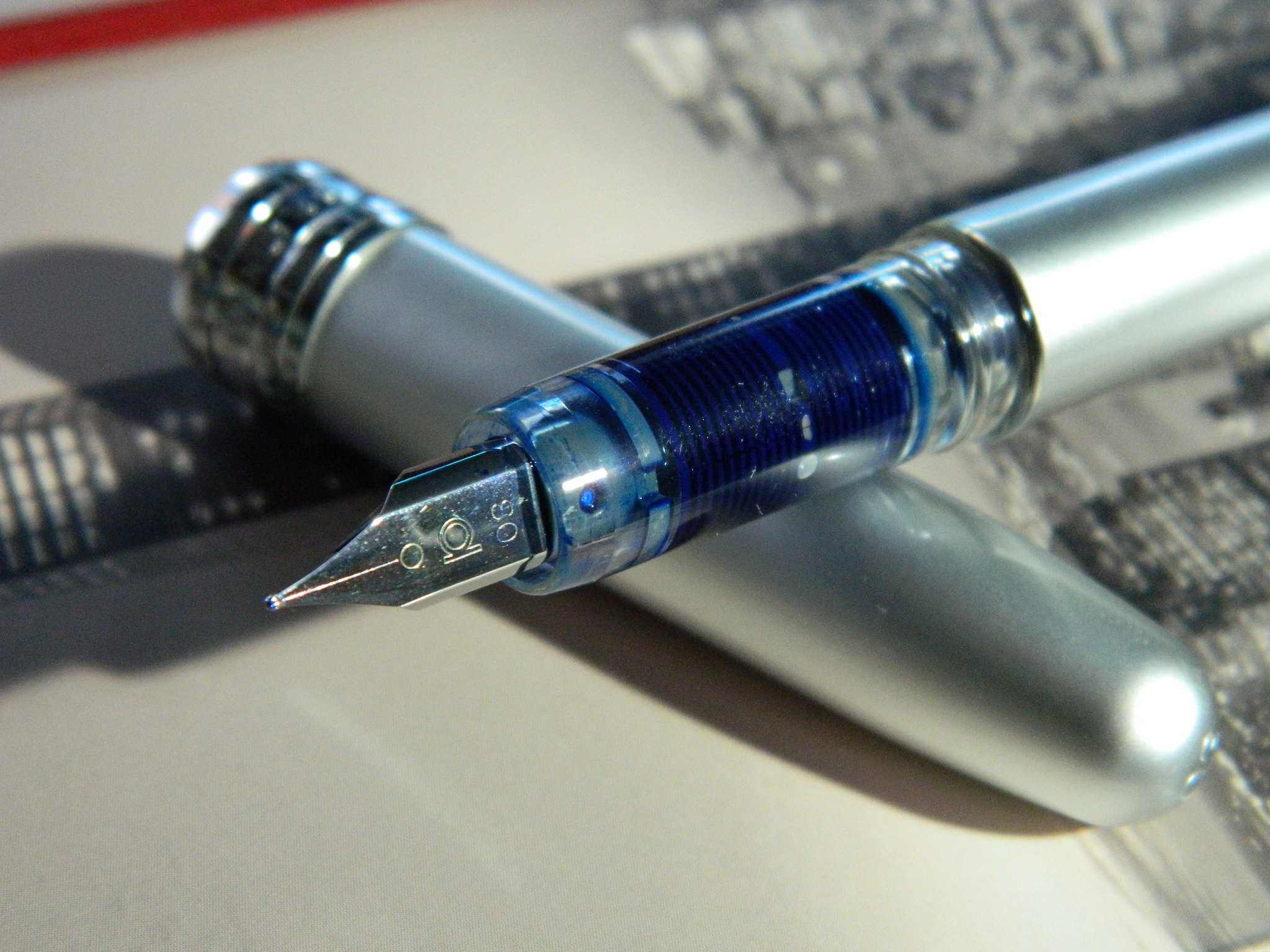 Pen Chalet’s web site states that the Plaisir used to come with a nib that matched the barrel color of the pen. So if you ordered the red, then the nib was red. I’ve never seen that in the wild, but it sounds interesting. You might be able to get hold of some of those older models on eBay or someplace like that, but they’re not available from retail outlets any more (as far as I can tell). Certainly not with any of the major online retailers I checked. Plaisir nibs are a shiny steel, available in either medium or fine. 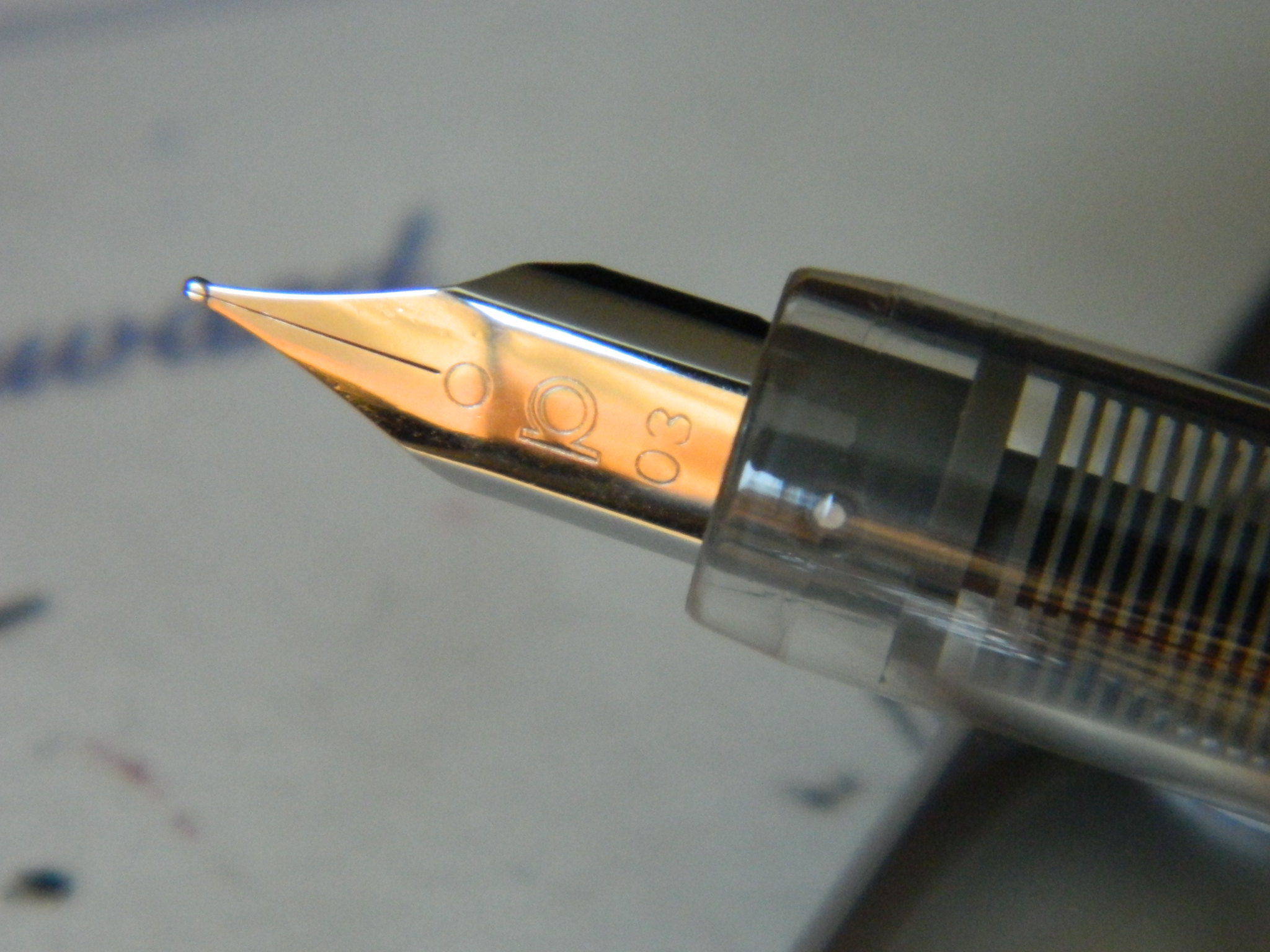 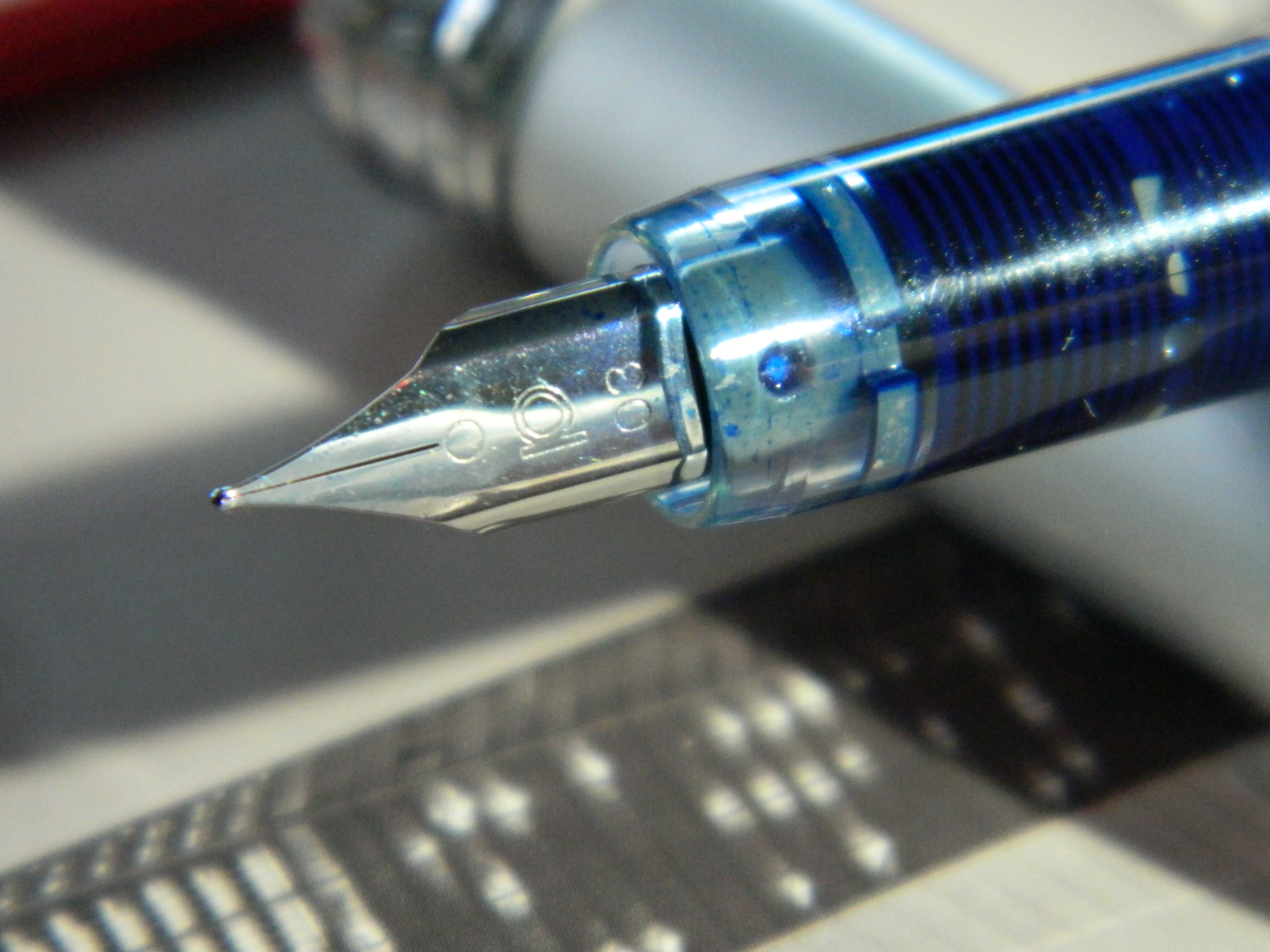 They’re a plain nib, etched with the Platinum “P”, and either an “03” indicating a fine nib, or an “05” for a medium. The only outward change that I could see on this new Plaisir, was that the number was also etched onto the top of the cap, but that wasn’t present on the older model. The picture below shows the top of the cap on the older, gun metal Plaisir with a medium (05) nib on the left (no signifying number on the cap), and the newer, silver Plaisir, with the fine (03) nib on the right, with the cap marking on the end. 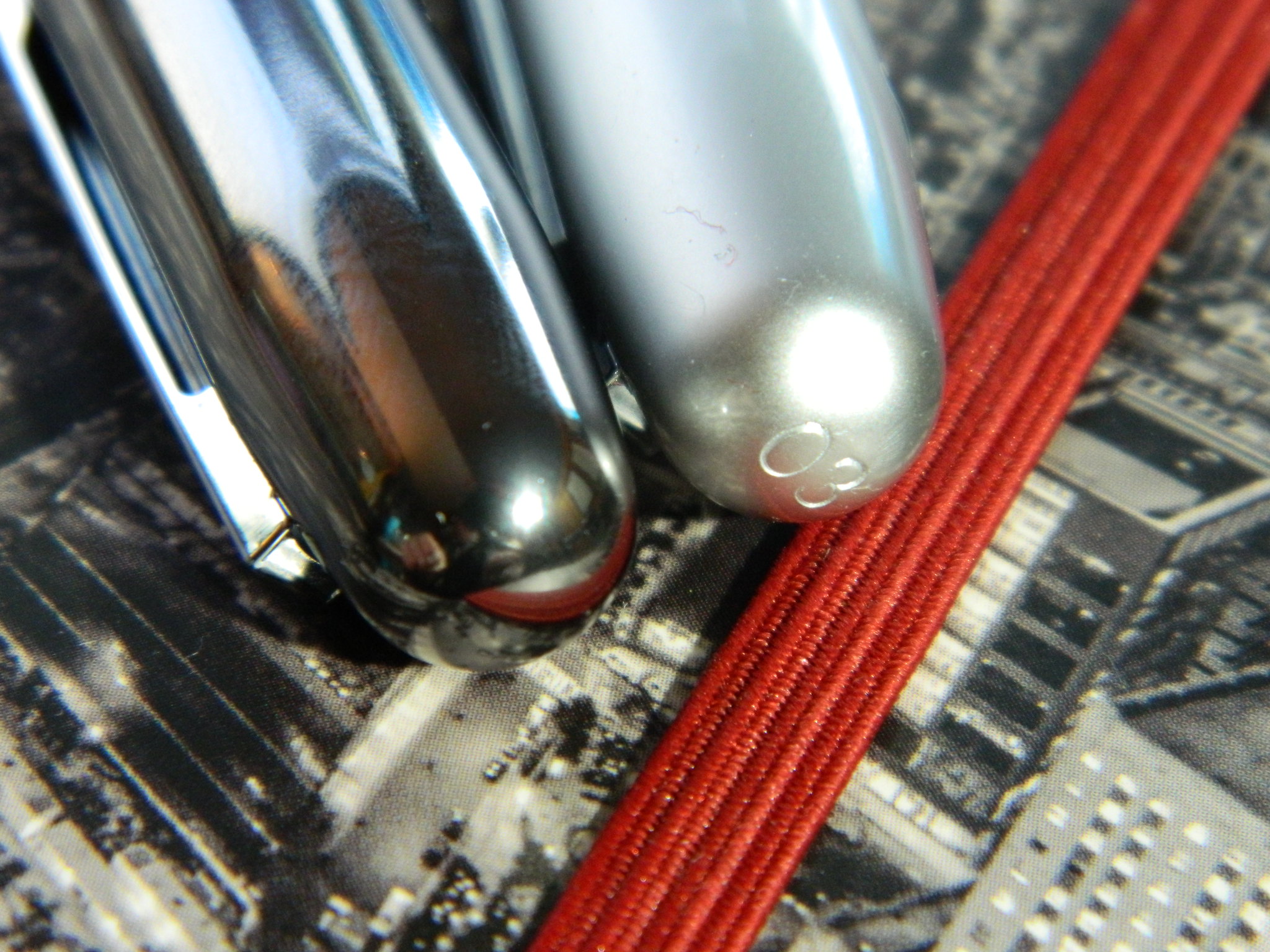 I’m undecided on the top-of-the-cap markings, I suppose it helps me to remember at a glance which nib is fitted to which pen; and there are days when I need all the help I can get just to remember my own name. But, on balance, I guess I’m coming down on the side of unnecessary and detracts (only very slightly) from the overall appearance of the pen. 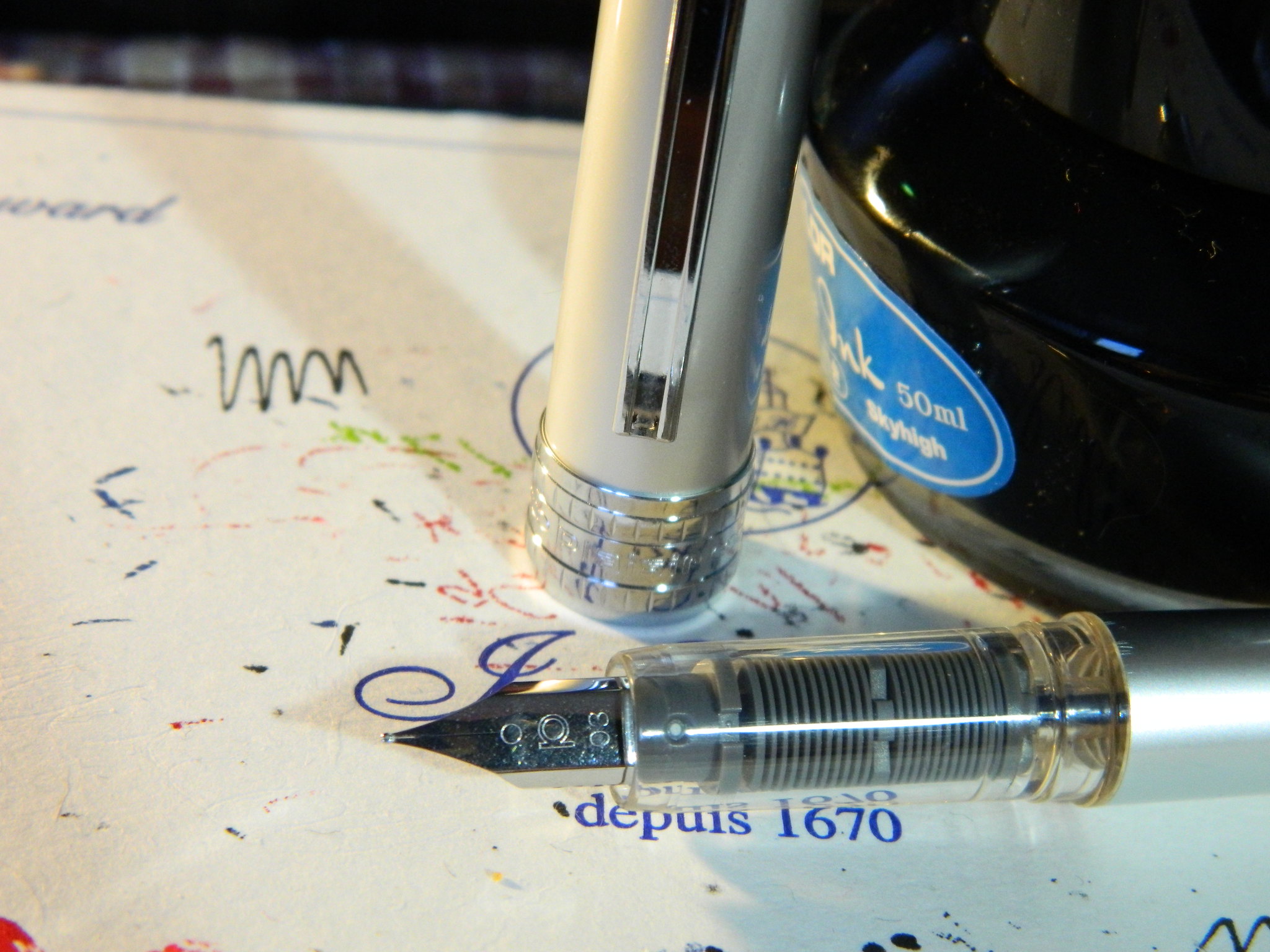 The cap is of the push-on variety, rather than threaded, which I quite like for convenience and quick use. It’s also fitted with Platinum’s slip & seal cap design; which helps keep the nib and feed from drying out, if you’re prone to leaving your pens inked and unused for extended periods of time. 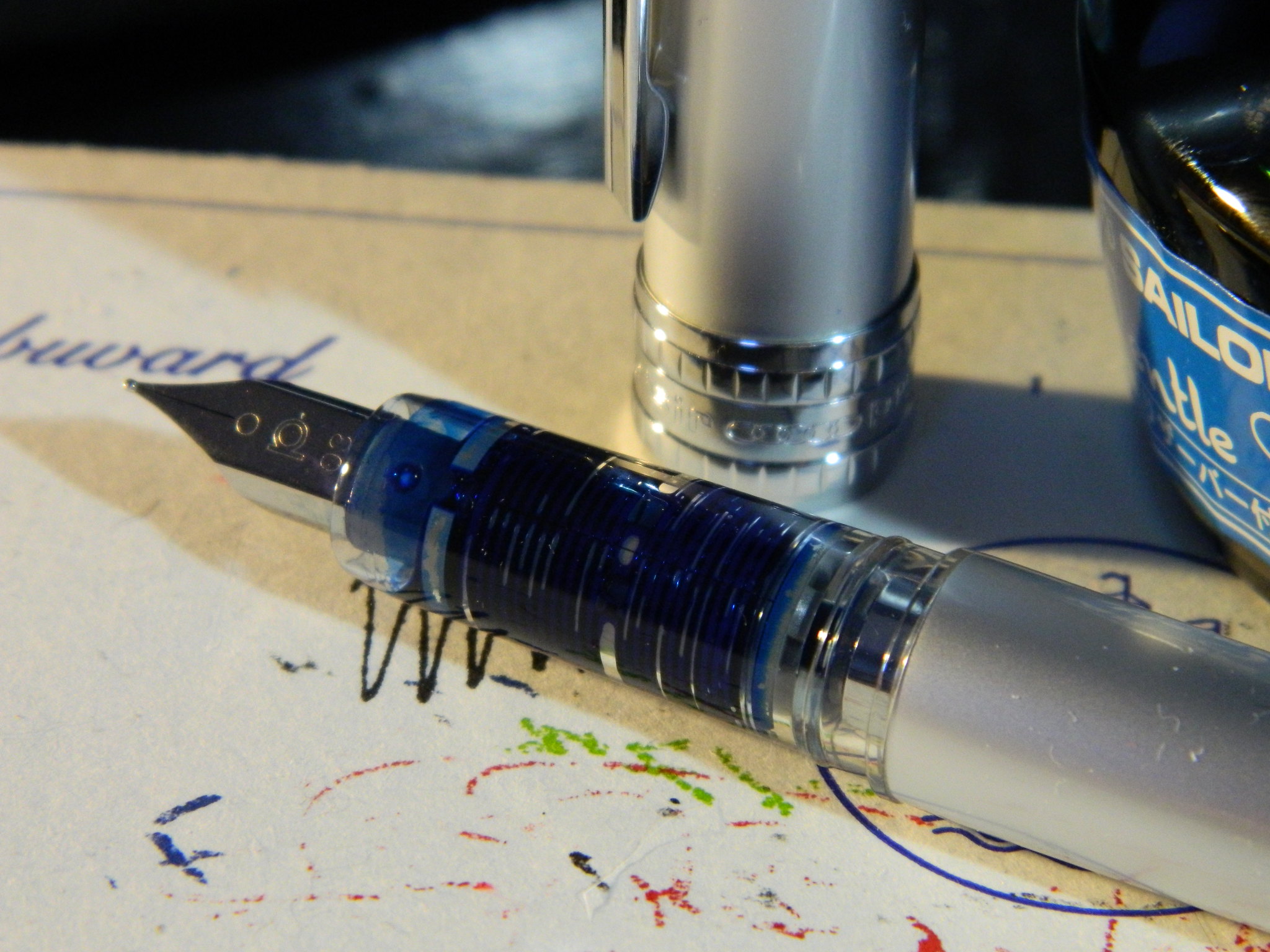 The cap has a patterned band around the bottom, where it joins the barrel. The Platinum logo, Platinum Japan and Plaisir are etched around the circumference, along with some other patterning. It’s tasteful, and breaks up the otherwise unadorned cigar shape. 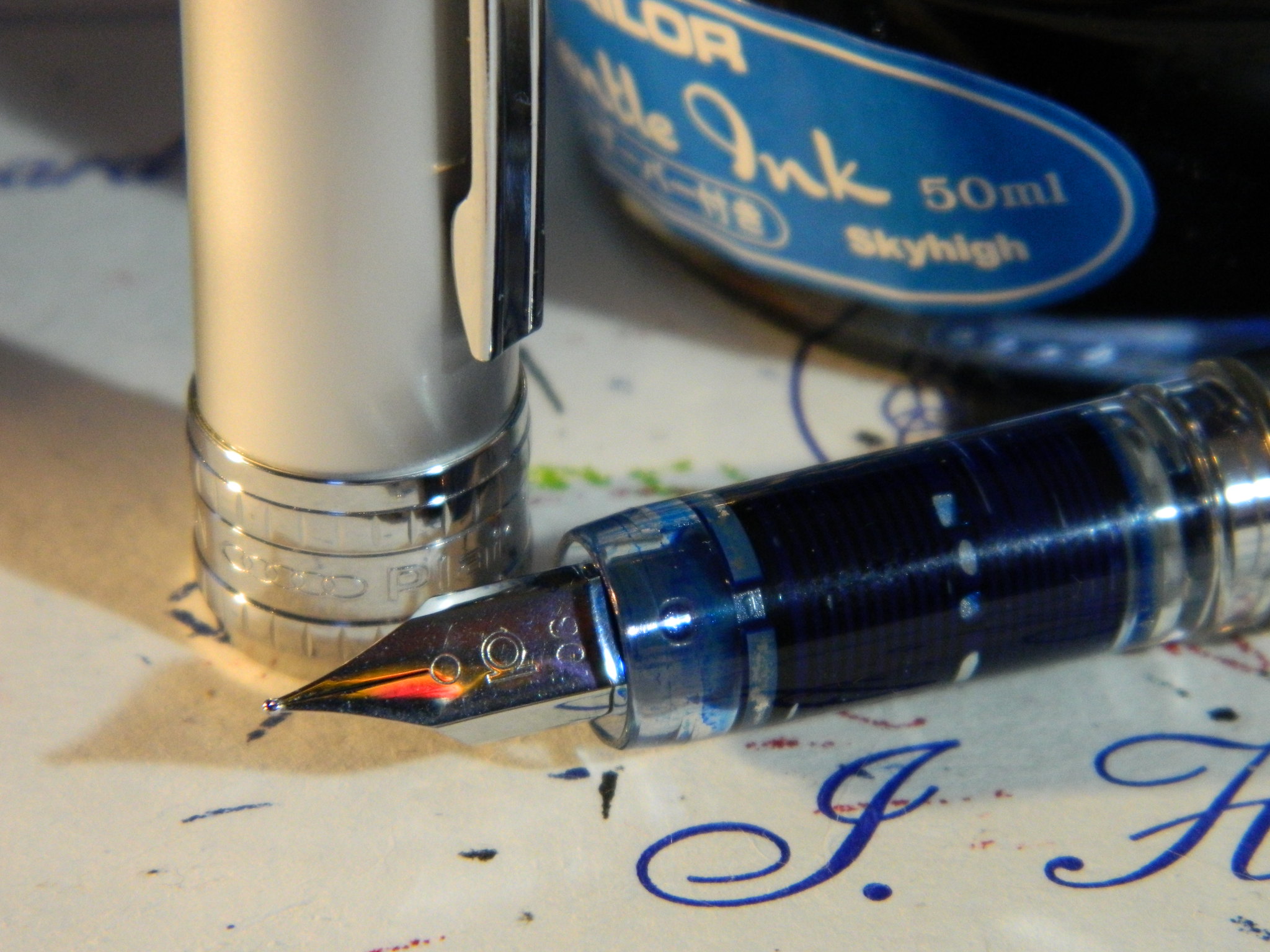 The Plaisir comes with a single proprietary Platinum ink cartridge, but can be fitted with a Platinum converter for inking straight from the bottle. Platinum also makes an interesting cartridge adapter so that you can fit a European standard ink cartridge to any Platinum model (I can personally vouch for the Plaisir, the Balance, and the Century 3776). You can get these from Pen Chalet for about $6.00 US at the time of writing, and they do exactly what they’re supposed to, and do it very well. I wrote a review on these adapters in the summer of 2017, and you can find it here.

Nothing about the overall specifications of the Plaisir has changed since my last review, so I won’t repeat the size and weight details here. I’ll just add that, whilst it’s not a large pen (open and unposted, it’s about the same size as the Platinum Century 3776, and almost a centimeter shorter than the Balance), it’s a very light, comfortable pen in the hand. The highly shiny barrel however, can be a little too smooth if your grip doesn’t hold that firm, but the plastic grip section does go some way to mitigate that.

How Does it Write?

The last time I reviewed one of these, I was less than impressed with the nib. However, I am more than happy to say that this time could not have been more different. I had a couple of Platinum converters in my drawer, so I fitted a silver one (of course), and flushed everything through with a little tepid water, before inking up the new Plaisir with some Sailor Jentle Sky High blue. This is a nice, mid-tone blue, which—I like to think—adds a cheerful note to the written text; but maybe that’s just me. Then I put nib to paper. 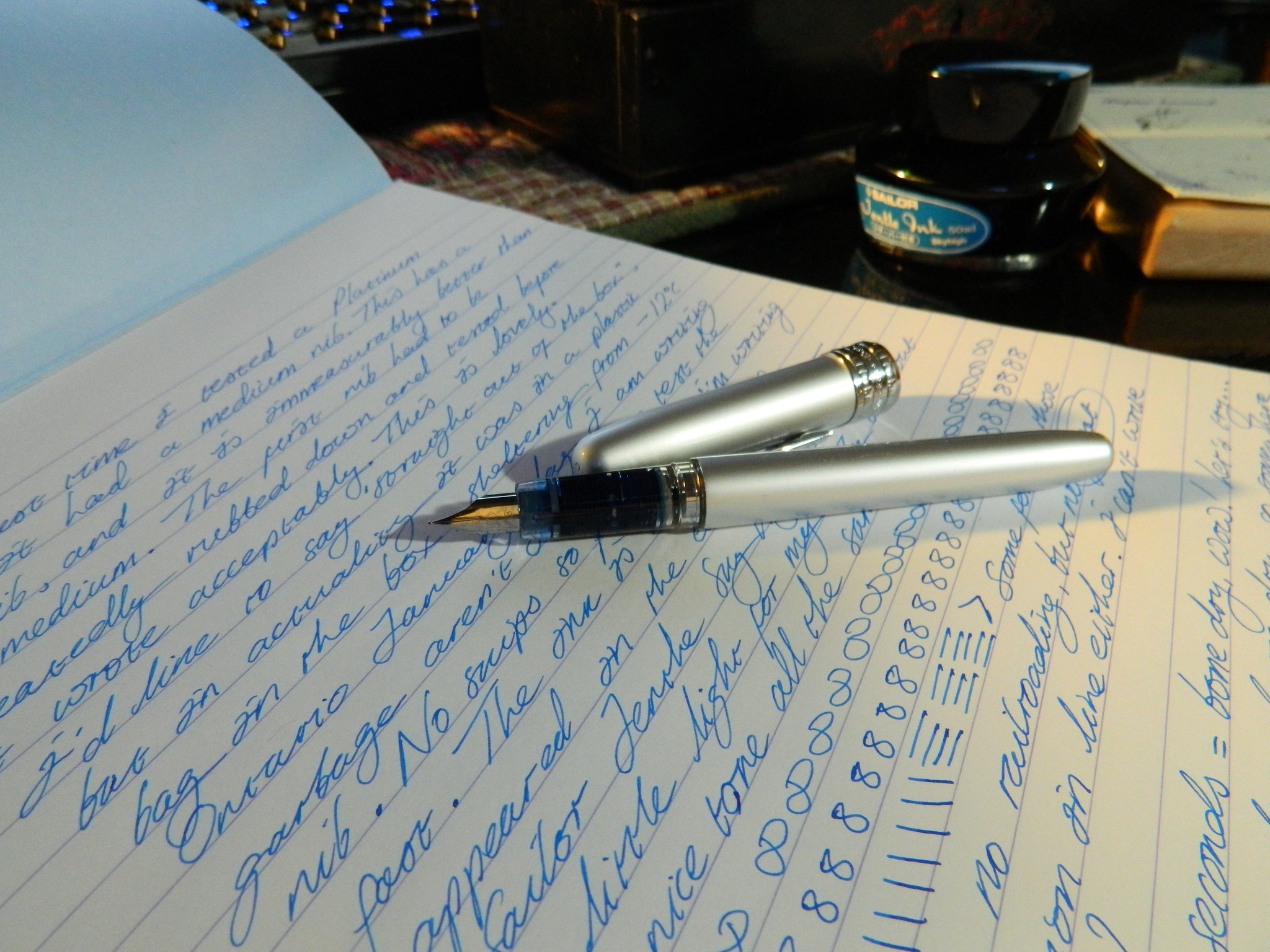 Straight out of the Plaisir’s budget-conscious plastic bag, this pen has written beautifully. As a Japanese fine (read almost a western extra-fine) steel nib, I could feel just a bit of feedback on the Clairefontaine 90gsm (white, lined) Triomph notepad I used for testing, but nothing more than that. 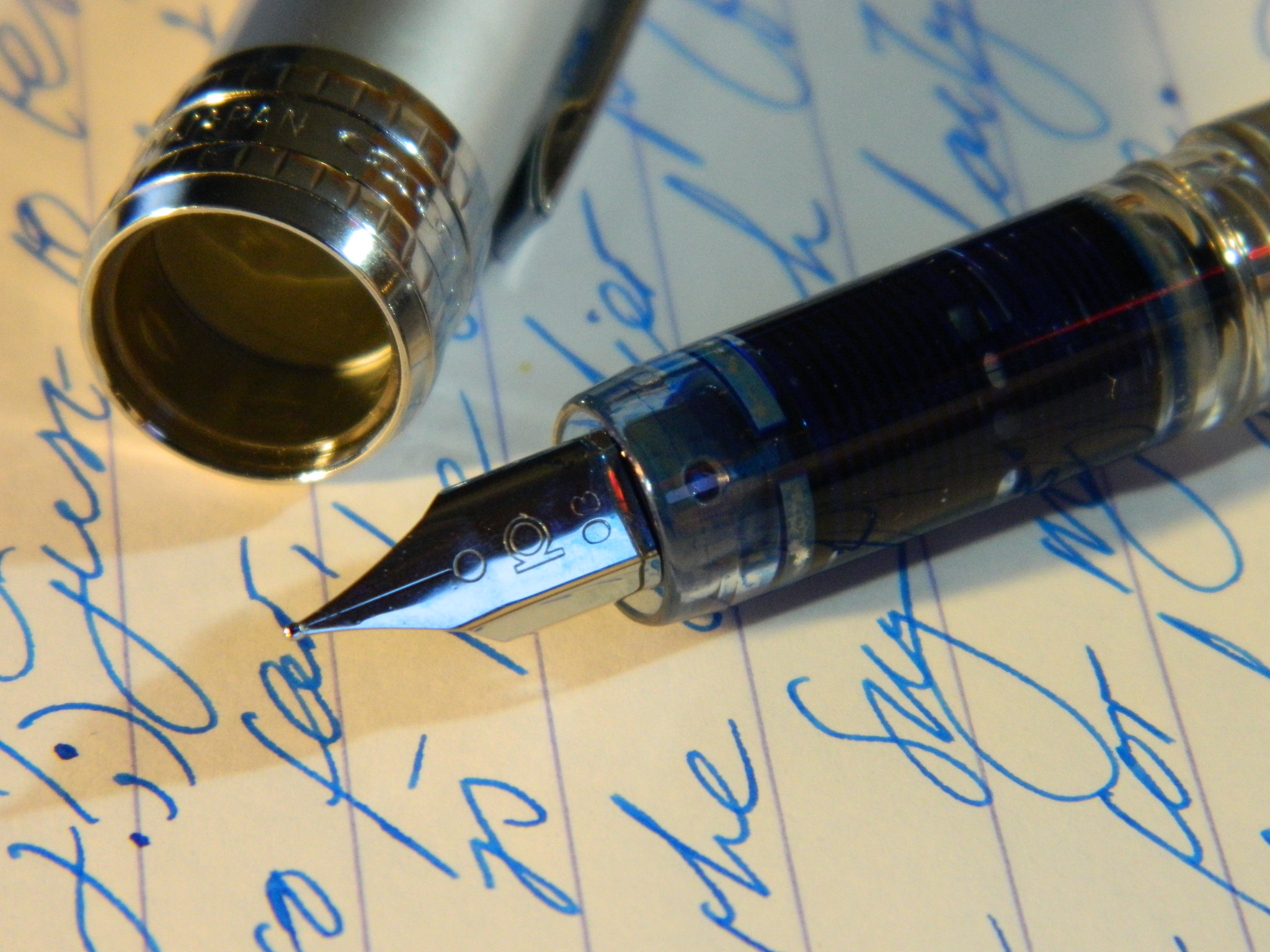 There were no hard starts, no dry down- or upstrokes, just smooth, uninterrupted ink flow. The scan of my writing sample below, shows what was a truly excellent writing experience for such a budget-conscious pen. 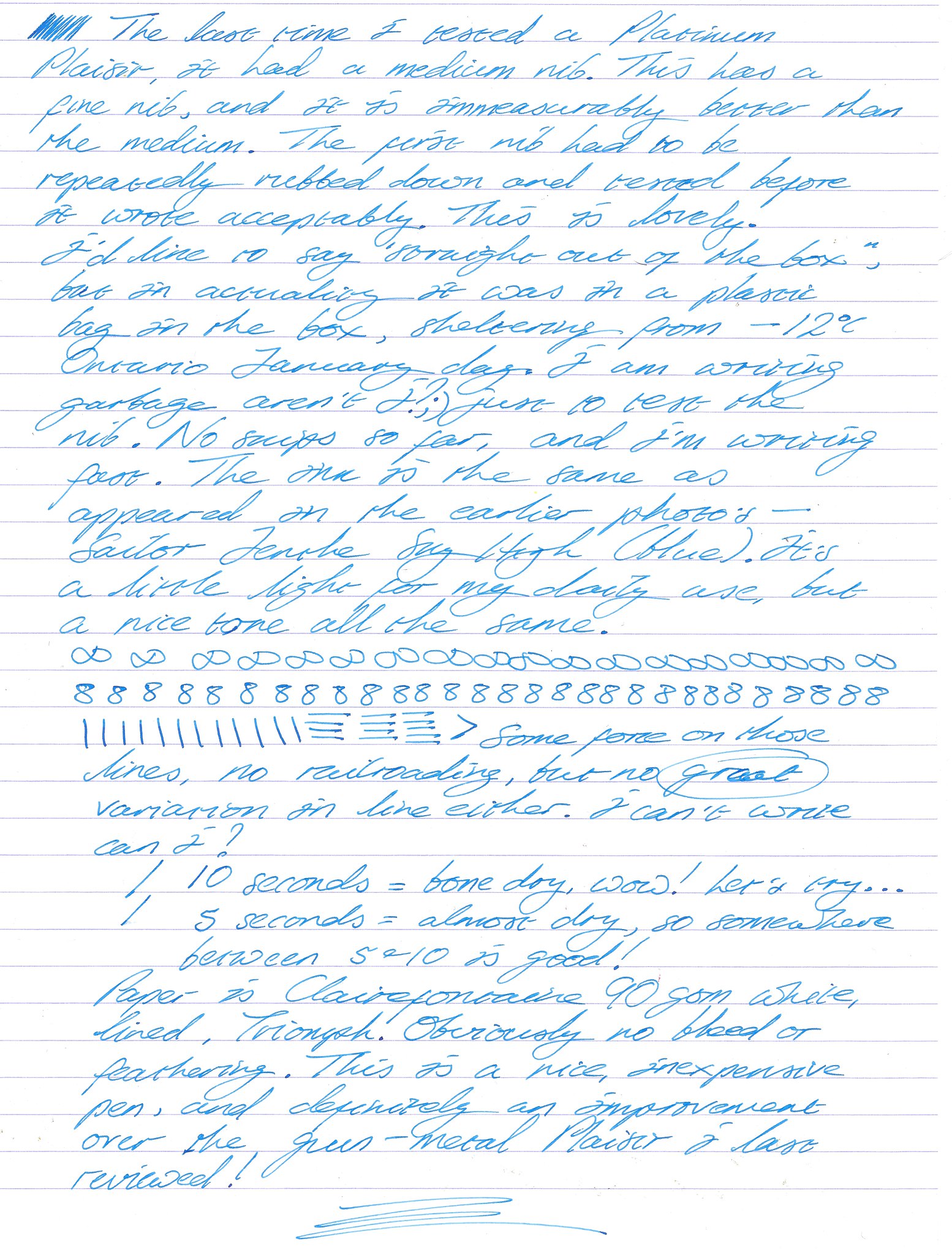 And even after I stopped testing, I kept dragging other notepads out to try the nib on, like a quick scribble on the 80gsm, Rhodia Dotpad No. 12… 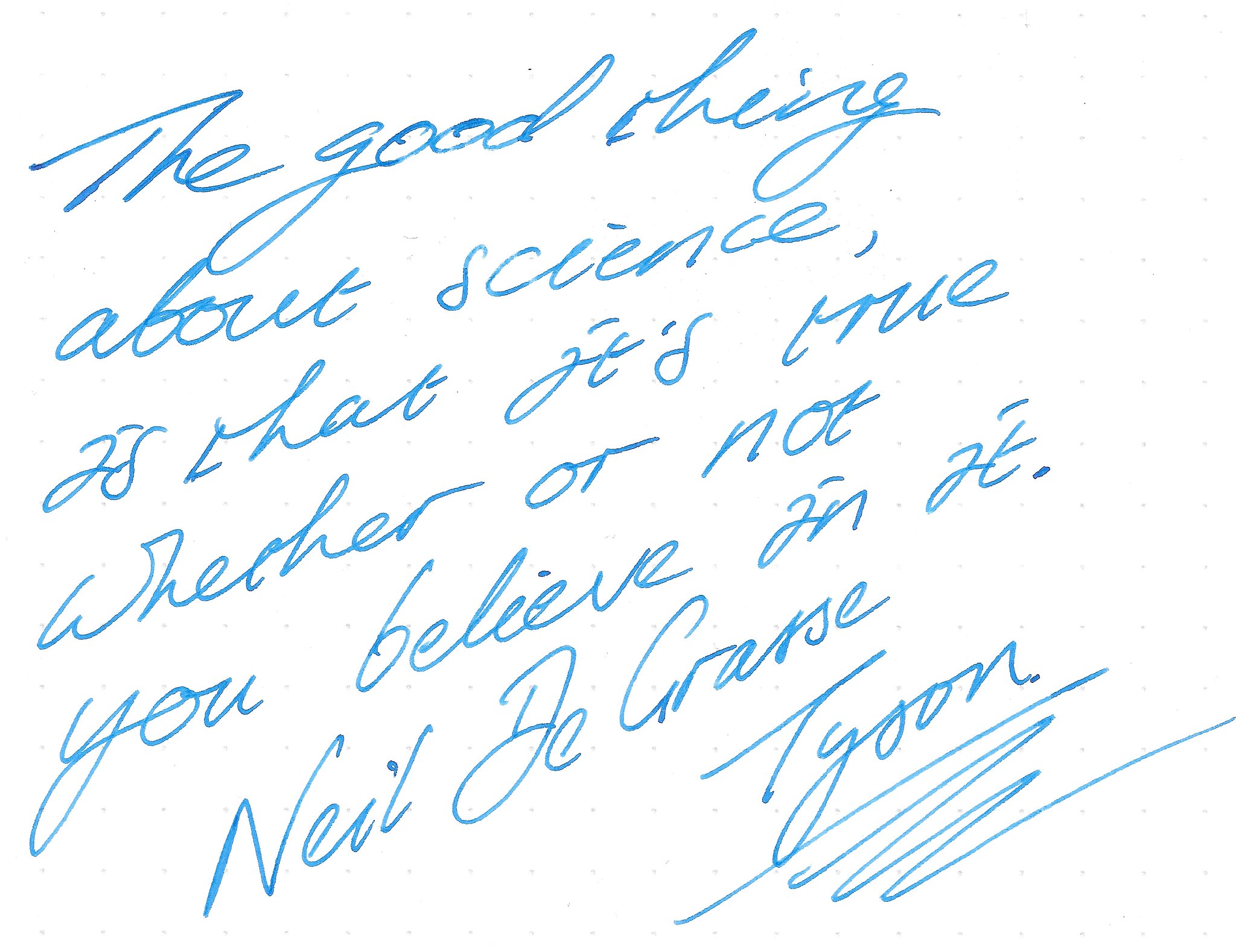 The Platinum Plaisir is an attractive, affordable, well-made fountain pen; and if the nib I had was a good example of Platinum’s quality control, then you can color me very impressed indeed. For $17.60 US (Pen Chalet; 2018-01-27), and about $29.00 CAD, and given the flexibility of cartridge/converter filling, plus the ability to use international cartridges with the Platinum adapter, this makes the Plaisir an amazing, worry-free option for everyday carry. Plus, at 19g (a fraction more than 0.6oz) it’s one of the lightest pens I’ve used, and wouldn’t be a trial for anybody’s airline luggage allowance. 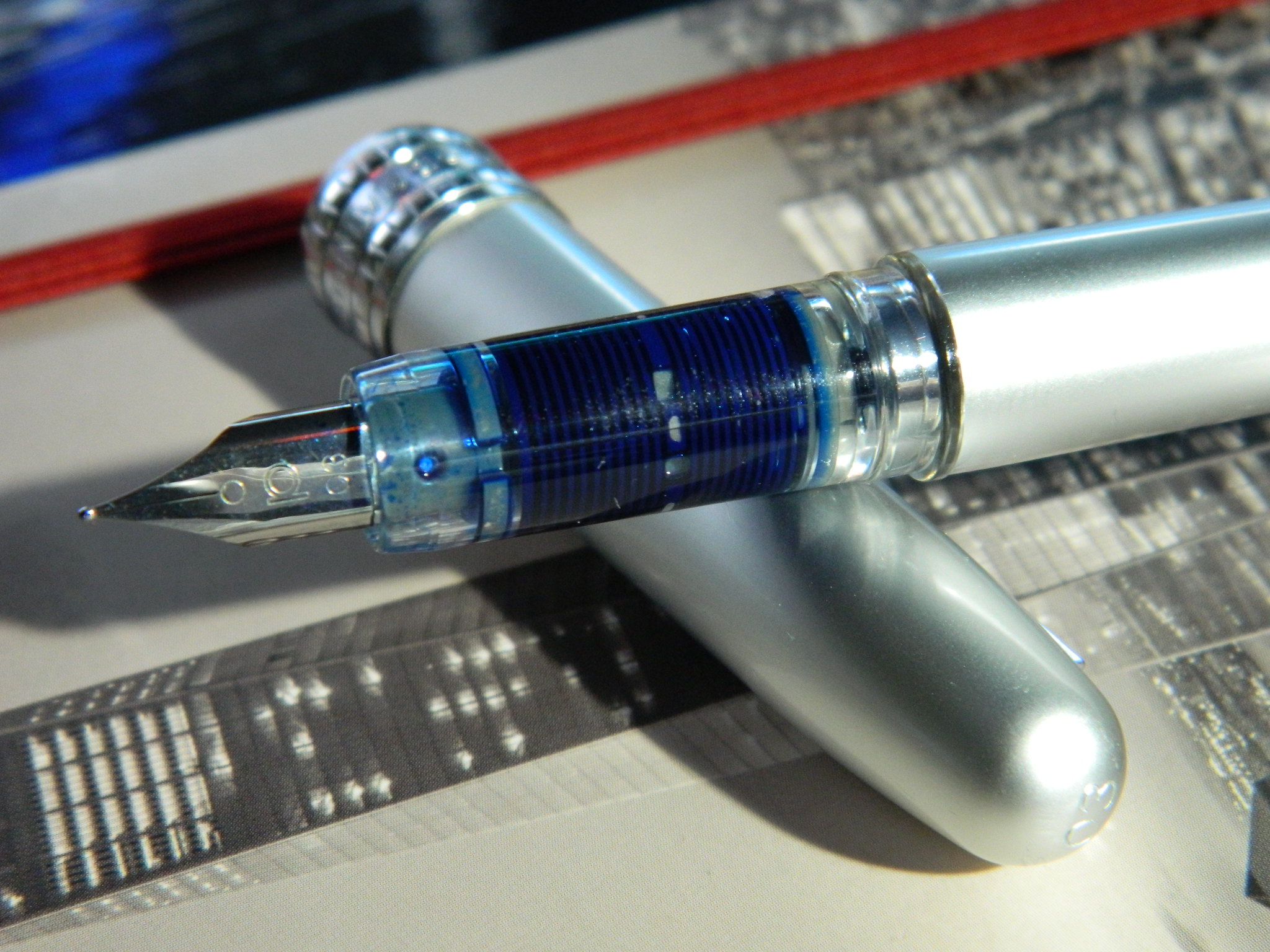 Lastly, since my review of the gun metal Plaisir last year, that pen has kicked around variously between my desk, and the pencil case of my youngest daughter. It’s not as chunky as the TWSBI Eco she has, so she likes to steal it from me whenever she can. So, I can also say that the Plaisir has withstood a pretty substantial, long-term, real-world, stress-test, and is carrying-on unscathed, and with no malfunctions to report.

My only concerns—if I were picking any more of these up—would be to make sure that the nibs were all as good as this one… and that I had a color to match every ink I was using.

Thanks again to Pen Chalet for providing me with the opportunity to revisit the Platinum Plaisir.

8 thoughts on “Platinum Plaisir in Silver, from Pen Chalet”