Well, everybody seems to be doing a pens and inks I bought in 2017 post, so I thought I might do something like that, but a bit different. Because I’m contrary. I took a look in my bag, and at what I’ve been carrying around recently, and it struck me that of all the stuff I’ve bought in the last year, there are only a few items that I am using heavily.

For me, this is the value for money test, what am I still using at the end of the year and the beginning of the next? 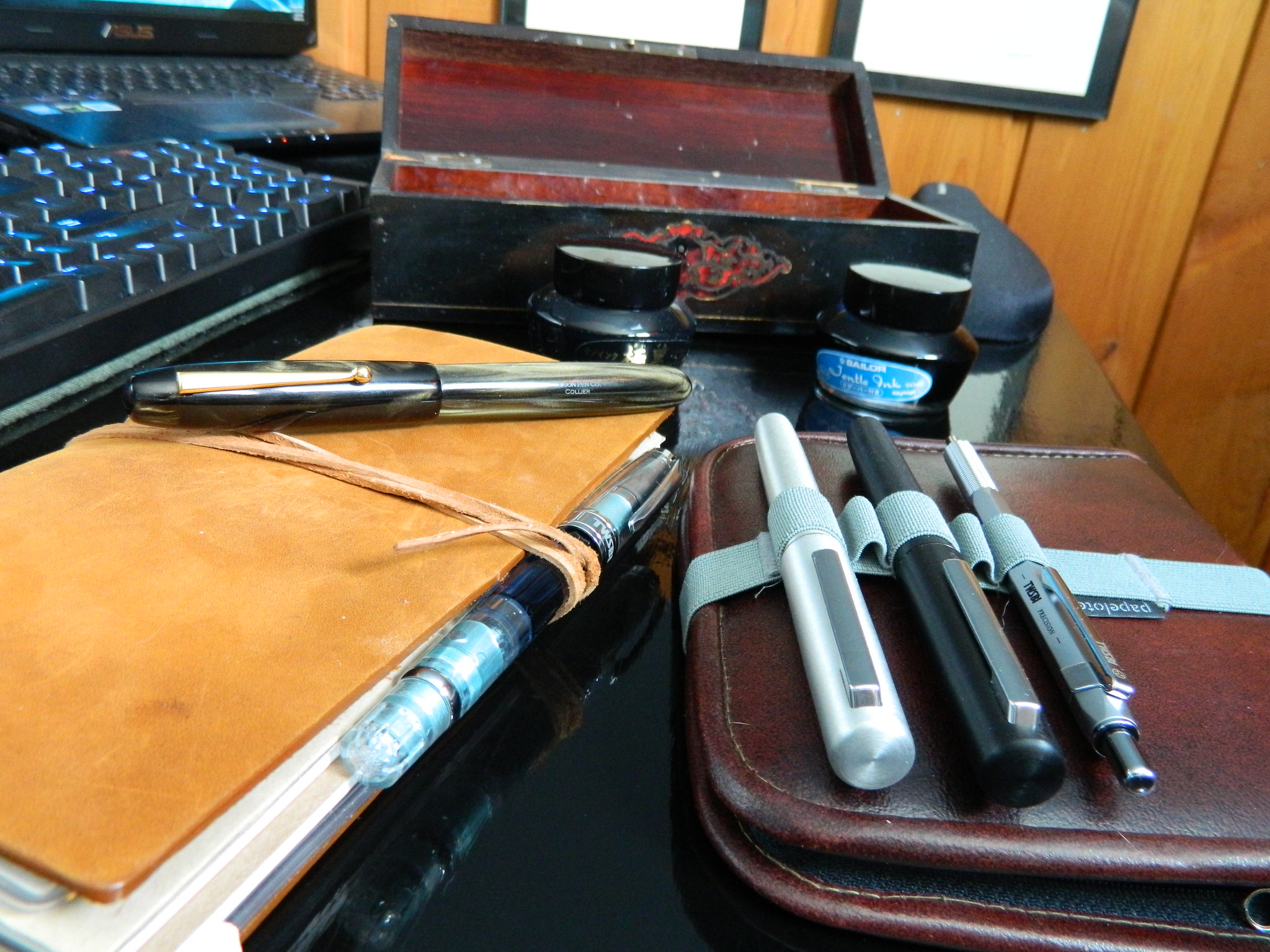 So this is what I pulled out of my bag on the first morning of 2018. Well, not the bottles, the keyboard, and the wooden box, but you get the idea. First, let’s take a look at the pile on the right. The pen case is actually my old dissection kit from wayyyyy back, when I did my zoology degree in the UK. All the elastic used to hold scalpels and stuff. My high-flying, pharmaceutical-company-executive aunt bought it for me when I first started, and it represents memories of a strong, smart, classy lady, that should still be with us.

The Papelote five-pen strap around the outside was purchased from…

This has been incredibly useful, and fits around any A5ish sized notebook or case I carry. There are multiple colors to choose from, as well as A4 and A6 sizes. The elastic is great for medium sized pens, but will take the bigger sizes (like the Aions), at a bit of  a stretch (literally). The Lamy Aions also came from Bureau Direct, and were reviewed back in late November 2017. They have not lost their appeal. I carry them around because they weren’t expensive, but they are seriously durable, look great, are comfortable to write with, and excellent, reliable performers. I keep the black inked with Sailor’s Kiwa Guro Nano (Ultra) Black, and the Olivesilver with Sailor Jentle Blue.

I’ve got quite a few pens with medium steel nibs (mostly Platinum Balances), but it’s these I choose to carry every time. I think it’s mostly their size and weight in my hand, coupled with those really smooth, generously wet nibs. At the moment, there’s no contest really.

Next to them in the elastic strap is my TWSBI Precision with a medium Fisher Space Pen refill. This is my go-to for really awkward writing scenarios—usually filling out immigration cards on international flights, with the card wedged vertically against the seat in front. It never lets me down.

Opening up the case… 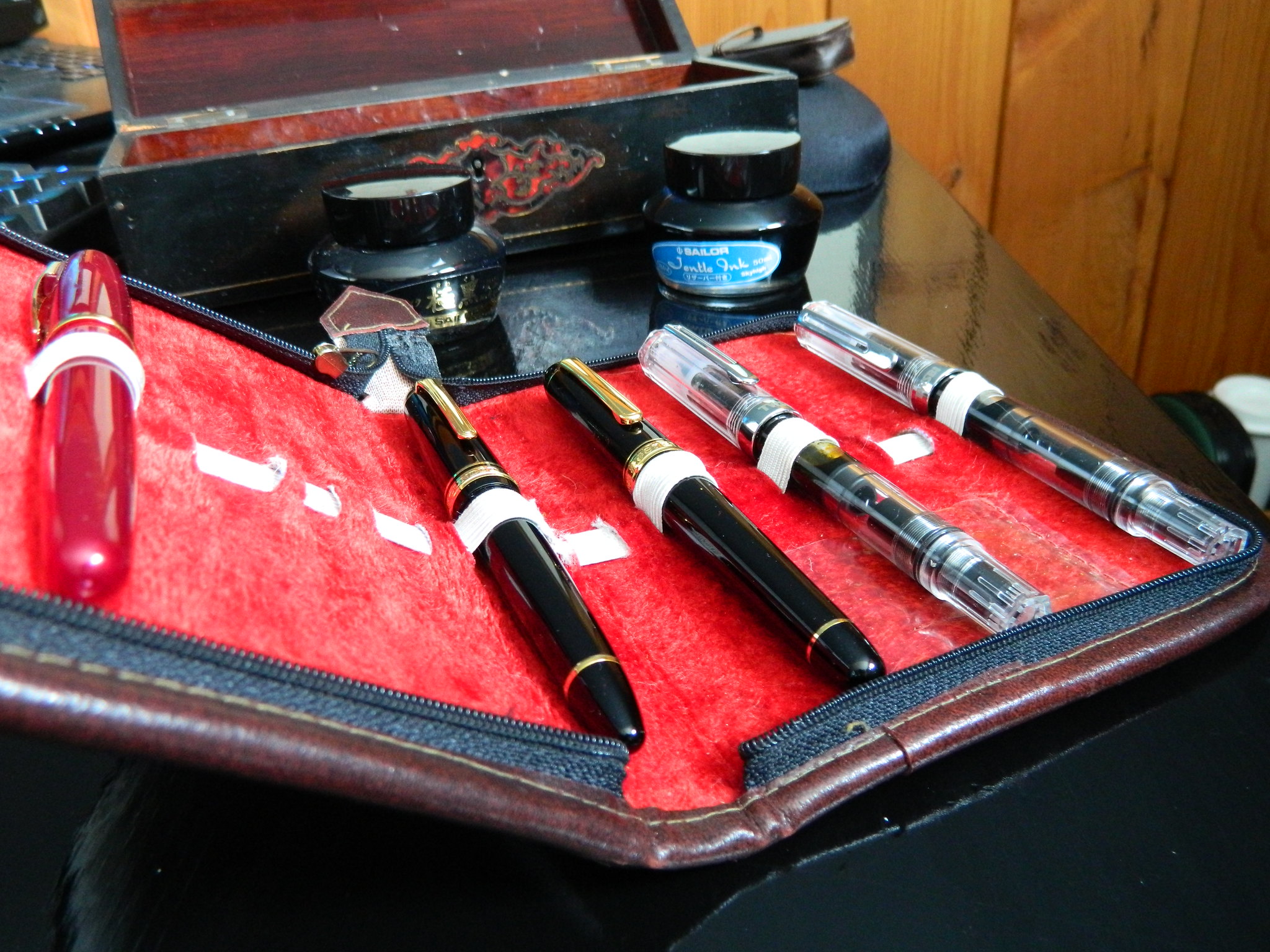 From left to right, a Platinum Balance in Wine Red, loaded with Sailor’s Jentle Four Seasons Irori (Red). I use red ink for annotating student assignments and similar notation. It’s a bright, fire-engine red, and is so well-behaved in your pens, you would hardly know it was there. Despite owning a TWSBI Eco with a fine nib, the Platinum Balance is the only fine (steel) nib I carry, and it has been an excellent workhorse. Especially since the J. Herbin Rouge Hematite has been consigned to the bottom desk drawer, reserved for those inks that try to eat my pens.

In the middle is my Sailor 1911L Large, with a 21K broad nib. This is a much-loved pen, and I sometimes carry it, but most frequently it stays behind on my desk… only because I love it so much I don’t want to risk losing it. The nib is far more of a medium than it is a broad. In fact, I can’t really see much difference between the Sailor’s broad, and the medium 14K nib of the Platinum Century 3776 next to it. They’re so similar in fact, the pens even look the same in the picture above. So, given that they look pretty much identical, and their nibs are so similar, I mostly carry the Platinum Century instead of the Sailor. This is because the Sailor costs almost $400 CAD to replace, and the Platinum only about a quarter of that. And do I really get four times the pleasure from the Sailor? No not really. I wouldn’t get rid of it for anything, but the $100 CAD Platinum Century is easily as good all-round.

The last two pens in the case are the twin TWSBI Ecos, the first with a 1.1mm stub nib that I keep loaded with Noodler’s Golden Brown, and the second has a broad nib, that is currently inked with Sailor’s Sky High Blue. I know the TWSBI Eco has taken some flack for developing cracks in the plastic and so on, but I can only speak as I find (as my mother always told me); and these Ecos have been extremely good to me. They never skip, rarely hard start, were beautifully smooth straight out of the box, and are an absolute pleasure to use. So, they’ve stayed in my bag since the day I bought them.

I have obviously left best ’til last. Not necessarily the best pen/s, or even the most attractive (although I happen to think my Edison Collier is both of those—it’s a personal choice). But if I were forced to snatch a few items from my desk as I ran out the door… then they would be the following three… 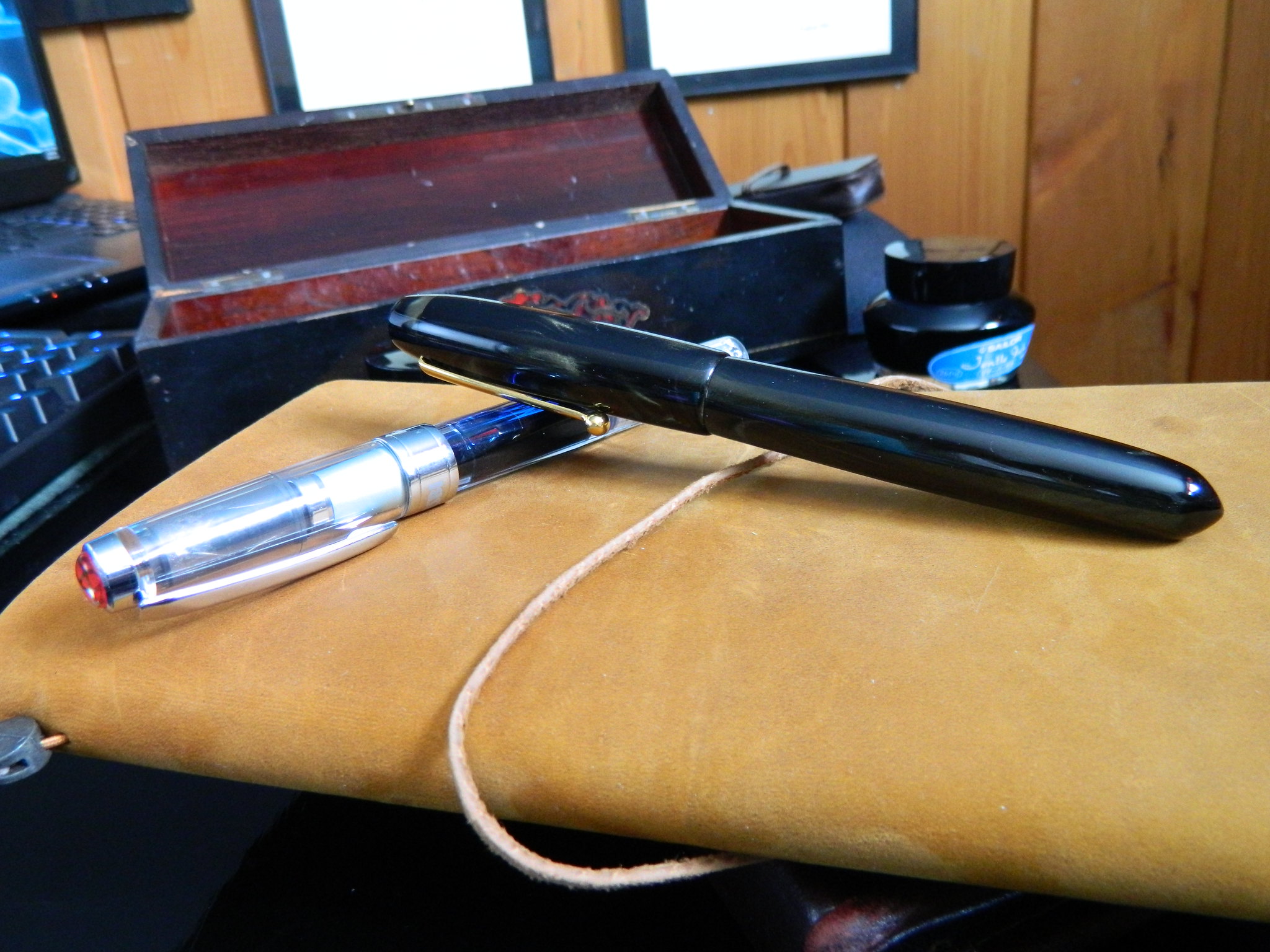 Since I bought it only a couple of weeks ago, I have become absolutely sold on the Traveler’s Notebook, and my economical add-ons. It has accompanied me everywhere I go. I journal in it; make notes; lists; record meetings; use the wallets for business cards; emergency contact numbers; store important bits and pieces… you name it. I’m hooked. What the Hell did I ever do without it? And the pen I always snatch up and wrap in its leather cord? The TWSBI Diamond 580AL, with a 1.1mm stub nib and, because it’s turquoise, loaded with Sailor Jentle Blue ink. 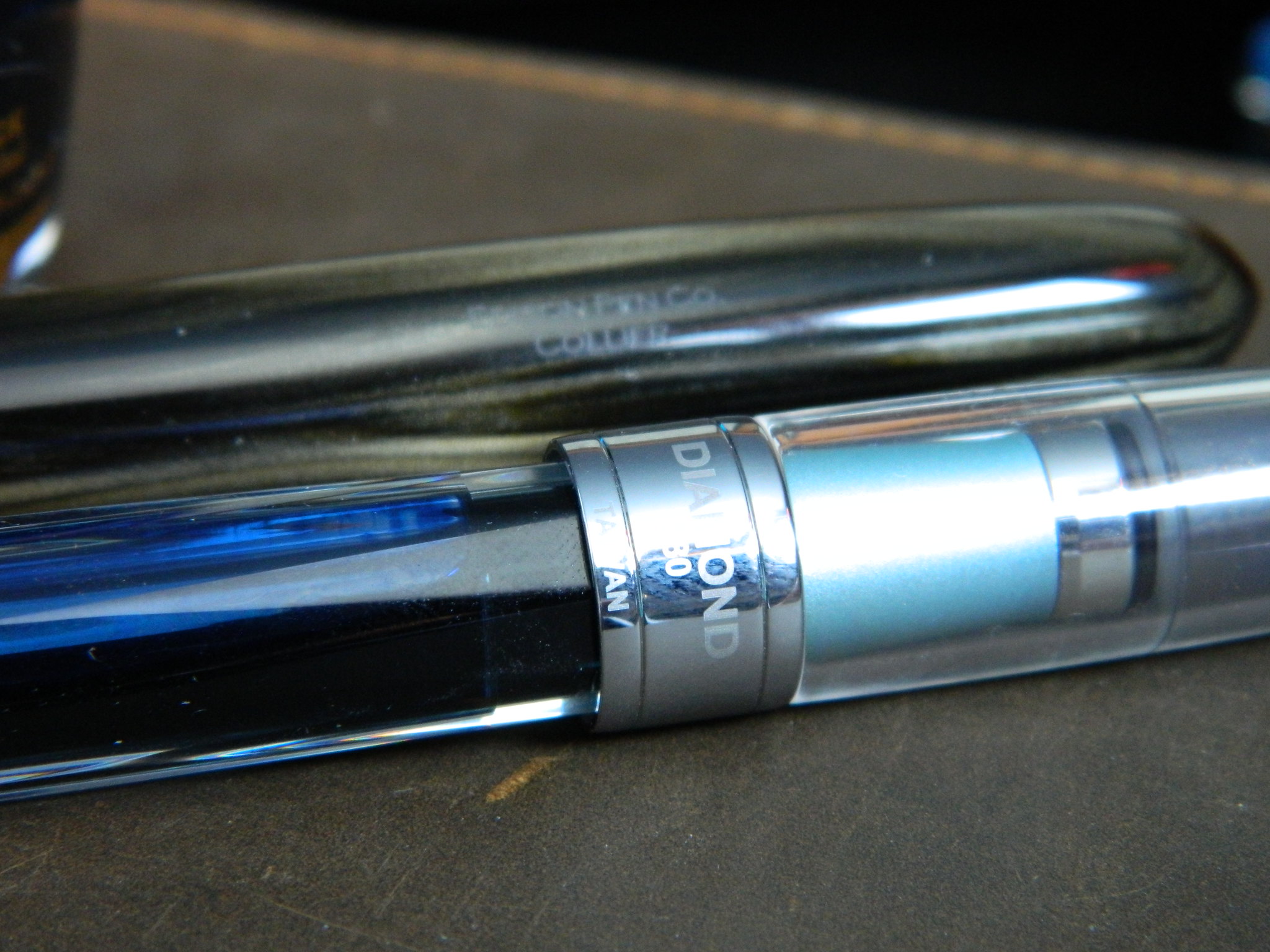 This isn’t my favorite pen, it’s a demonstrator, how could it be? But it writes beautifully and I love stub nibs. I like the ink, and I think they compliment each other perfectly. Also, it cost about a $100 CAD (with taxes), so it wouldn’t kill me if I lost it… and besides, I’m itching to buy the rose and the silver colors too. So the TWSBI’s nib, its performance and sheer value for money make it my choice for everyday and everywhere carry.

But my favorite so far this year, and the pen I would grab first if my office suddenly burst into flames, is still my Edison Collier in Burnished Gold… 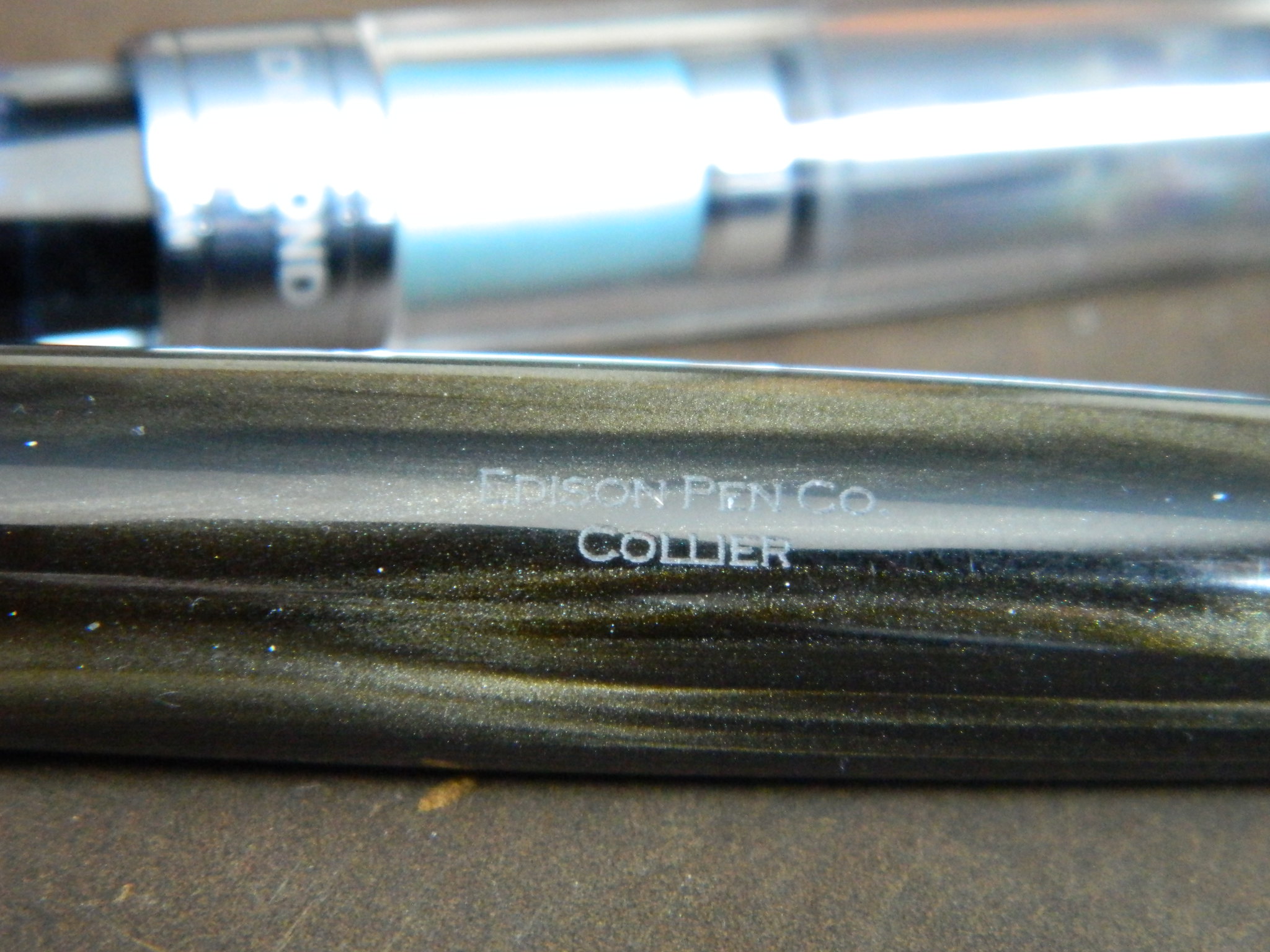 I love this chunky piece of art, with its swirling gold and its amazingly smooth steel nib. I reach for this pen above and beyond the gold nibs, and the more expensive Japanese pens every time. Maybe one day something will knock it into second place, but not yet. 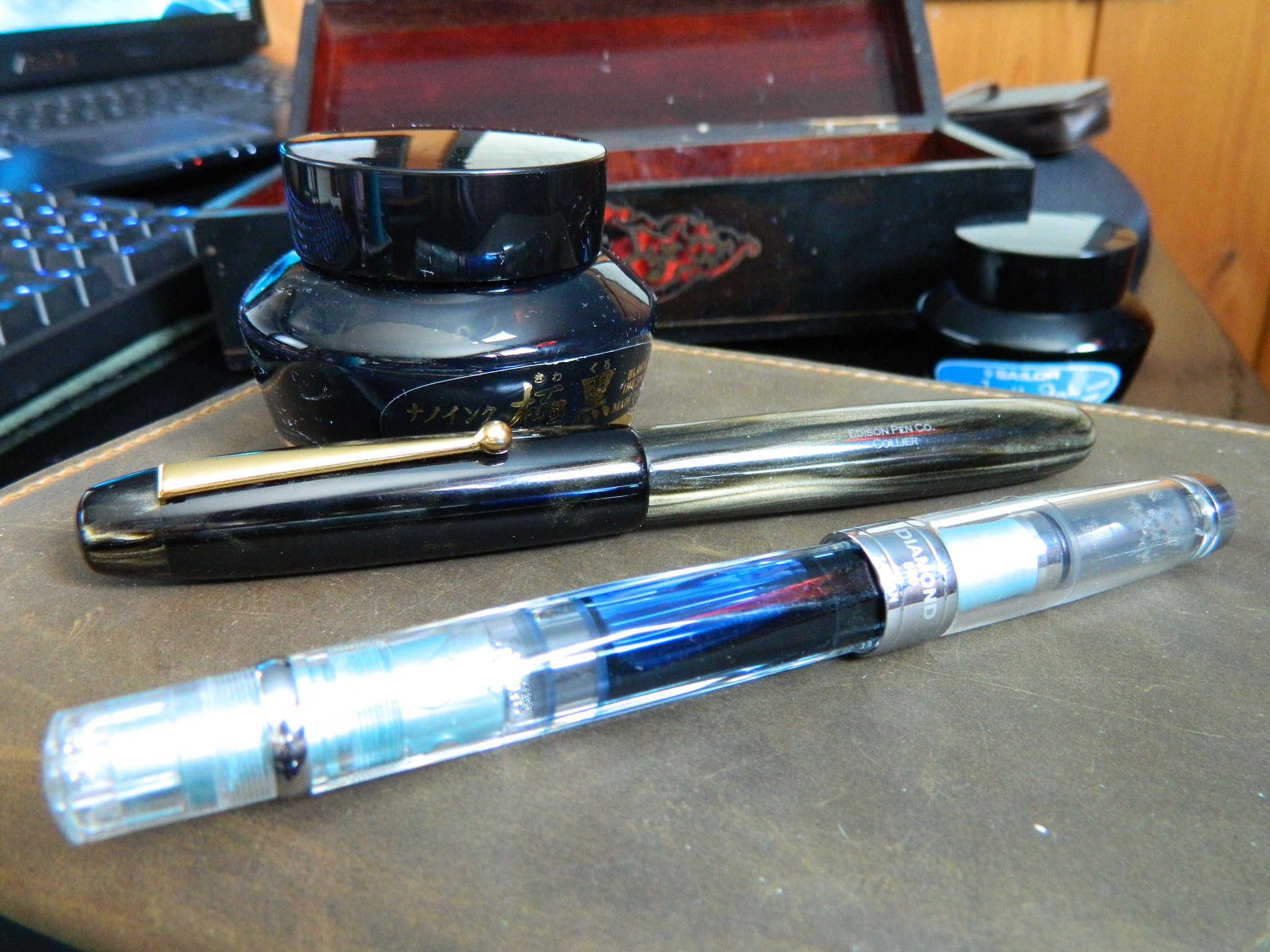 Because I like it so much, and it is more expensive than the TWSBI, the Edison hangs around the desk a bit more than it should. All the same, even though I fill it with an eye-dropper full of Sailor’s Kiwa Guro Nano, I still write that huge capacity dry on a regular basis.

So, if I had to recommend a pen, a notebook and some ink for every-day, every-where carries, from all of my 2017 purchases, then it would have to be the TWSBI Diamond 580AL, the Traveler’s Notebook and a bottle of Sailor Jentle Blue. It breaks my heart, because the Edison is definitely the better pen, and by far the better looking and superior performer, but it is pretty expensive, and because of that, I wouldn’t carry it everywhere and when. Also, if I could change anything about those three recommendations? Please, TWSBI, can we do something other than demonstrators that look like they fell out of a cereal packet?

Also, I have to say, if the Lamy Aion had come with a stub nib like the TWSBI’s, that would have won hands down for me. Still, at least it’s not a Safari, with a bloody great big paper-clip stuck on its head—bless its heart 😉