So, I didn’t have a decent ballpoint pen… well, that’s not strictly true. I have a Cross Century II ballpoint in black lacquer, and it’s a lovely pen. It’s just that

Cross refills, which you are limited to with Cross pens, are a bit like a lucky dip in your cat’s litter tray—you know that whatever you’re going to scoop out will probably be unpleasant, but it’s a litter tray (or a mass-produced Cross, sold in huge numbers everywhere), so what do you expect?

As much as I dislike Cross ballpoint refills, I am a big fan of the Fisher Space Pen refills. I love the engineering behind them—designed for writing in extreme environments, upside down, and so on. Not that I write a lot whilst doing handstands, but you get the idea. Don’t just take my word for how good they are…

… [it] does an excellent job of writing on multiple surfaces – including the Field Notes Expedition notebooks – and, yes, it does write upside down, making it a convenient choice for situations when you don’t necessarily have a flat writing surface available. The refill writes like a traditional oil-based ballpoint, and the only drawback I’ve found is that the tip can develop a bit of crust if you let the pen sit unused for too long. (A simple wipe or scribble normally solves the problem.)

The pressurized Fisher refills can be somewhat expensive, but they seem to last longer than a typical ballpoint refill.

Why wouldn’t you just buy a Space Pen then? You might ask, and that would be quite reasonable if I wasn’t such a picky sod about my pens. The Fisher Space Pens are mostly far too short for me, I prefer something longer, and a bit heavier. Fortunately, their refills come with a Parker style adapter, to let you fit them into any ballpoint that takes Parker refills, and there are a lot of those around. And so, I made out my bullet list…

Thus, my searches on the interwebs for an online store, based in Canada, that can ship fairly quickly and reliably, with competitive prices, and excellent service… brought me, once again, to the Wonder Pens web site. Honestly, this really isn’t some sort of commercial tie-in that gets me anything, these guys just seem to run the only decent, Ontario-based, online stationery store I can find. Other people have great stores… four hours drive away, but no real online purchasing options. There are one or two outside of Ontario, but Wonder Pens are in my home province (which makes for quicker deliveries), and mostly have better pricing. I rest my case.

I narrowed my search down to two possible candidates. The first potential purchase was the Caran d’Ache 849 Ballpoint in silver. At the time of writing (2017, September 21), this pen was being sold at $35.00 (Canadian, plus taxes and shipping). The Caran d’Ache 849 comes with their proprietary Goliath refill which they claim can write up to 600 A4 sheets of text. But what if I didn’t like it? Would it take a Space Pen refill? At 130mm (5.12in), the 849 was certainly long enough, but it weighed in at about 13g (0.44oz; according to the Wonder Pens web site); which was a lot lighter than any other pen I own, and that didn’t appeal to me at all.

The alternative, for $34.50  (Canadian, plus taxes and shipping; 2017, September 21), was the TWSBI Precision Ballpoint in silver. It’s also worth mentioning that this price was almost half that of one or two other Canadian online retailers. The pen had an all stainless steel body, apparently measured about 140mm in length (5.51in), 8mm (0.31in) diameter, and weighed about 26g (0.88oz).

It was difficult to find any of the usual sites that had reviewed the TWSBI Precision Ballpoint, but the customer reviews on Amazon were almost unanimously good, as were those for the same pen in black. TWSBI’s Precision range also includes mechanical drafting pencils, which use almost the same metal body (sans ballpoint mechanism etc, obviously), which I might also try out some time.

Anyway, another TWSBI it would be, with a Fisher Space Pen refill, in medium, with black ink.

Two working days later, I was opening the package… 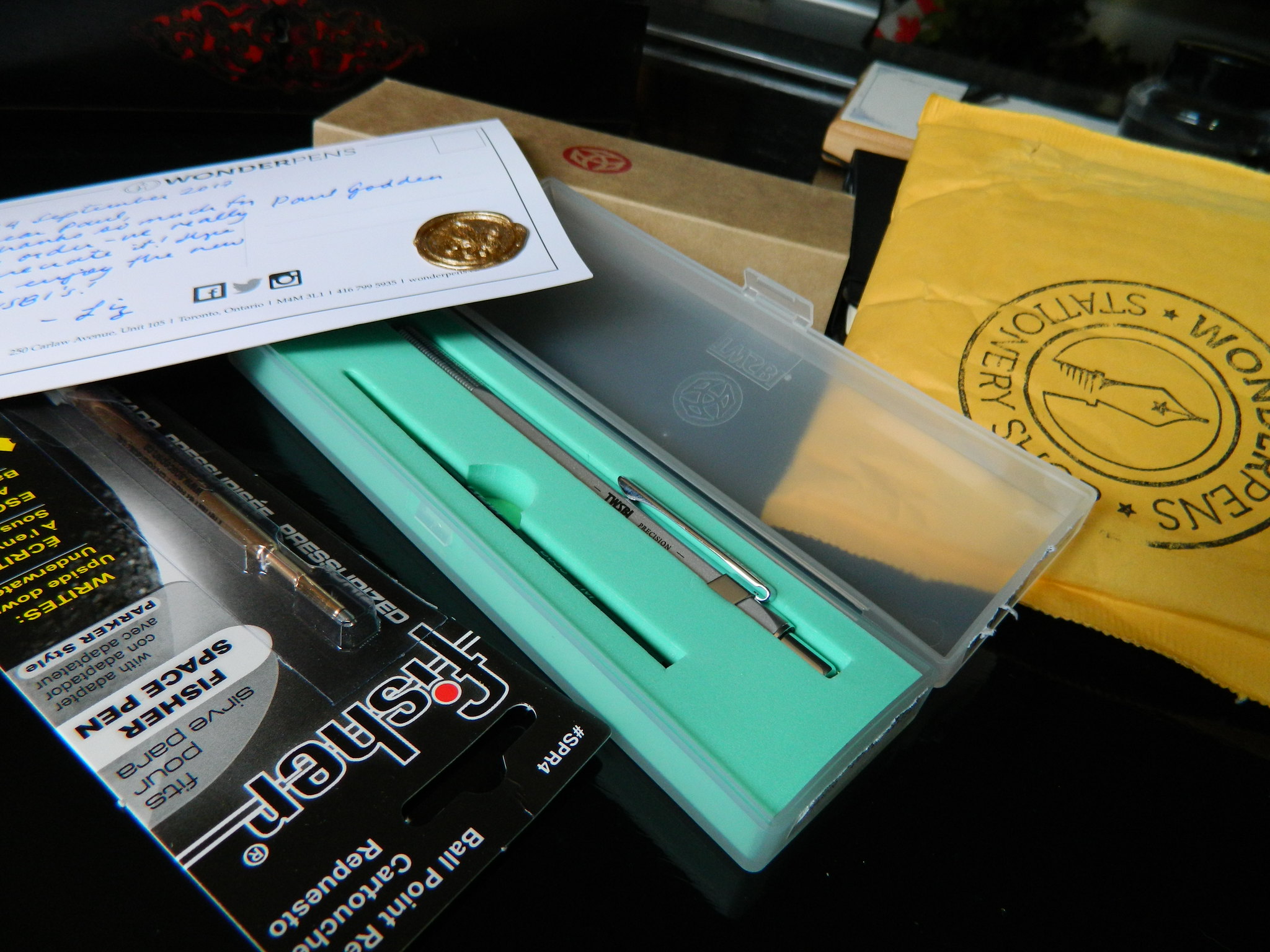 The first thing I noticed didn’t have anything to do with my pen or refill at all. Liz at Wonder Pens has upped her post card game! The card with this order came with an attractive stamp/sticker, and a beautiful, gold-colored, wax seal; and the card picture was pretty neat too. I really am a sucker for this stuff… 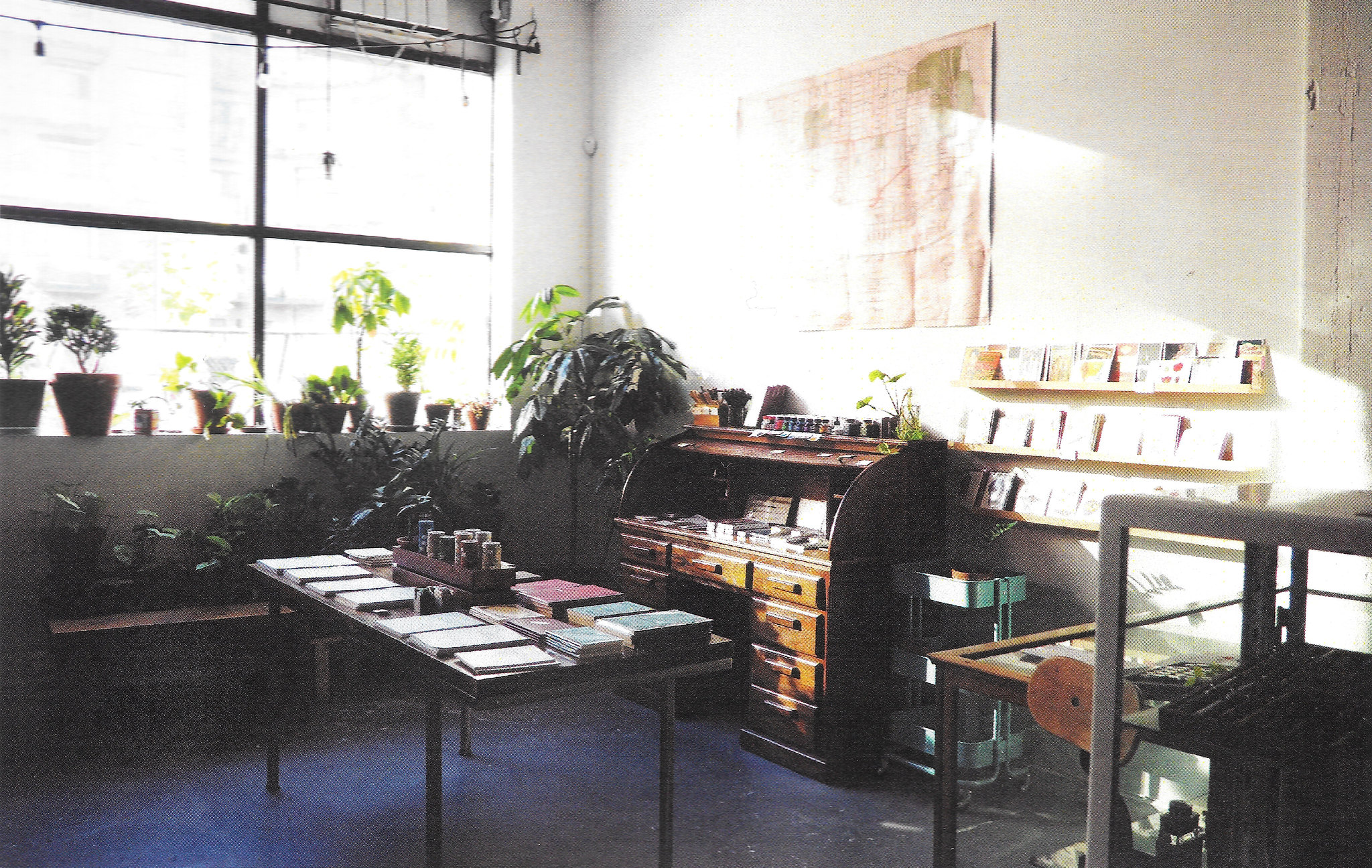 The pen came in TWSBI’s usual plastic clam shell box, snugly packed into the foam liner, along with a spare TWSBI refill, to add to the one already in the pen; making a grand total of two (who said qualitative researchers can’t get quantitative when they have to?). I was keen enough to see what they would write like, but I was always intending to Space this pen out. 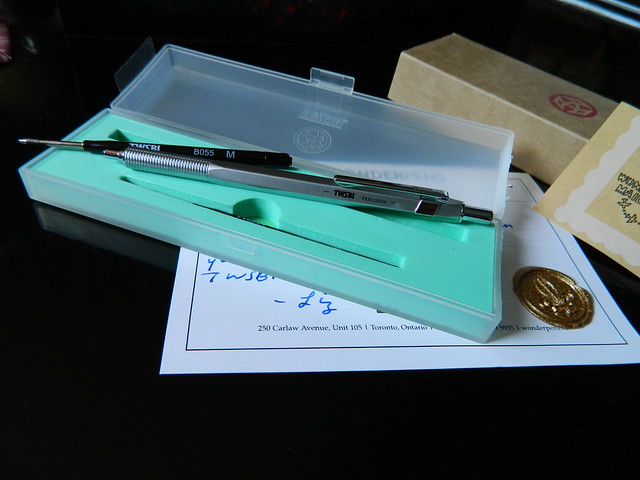 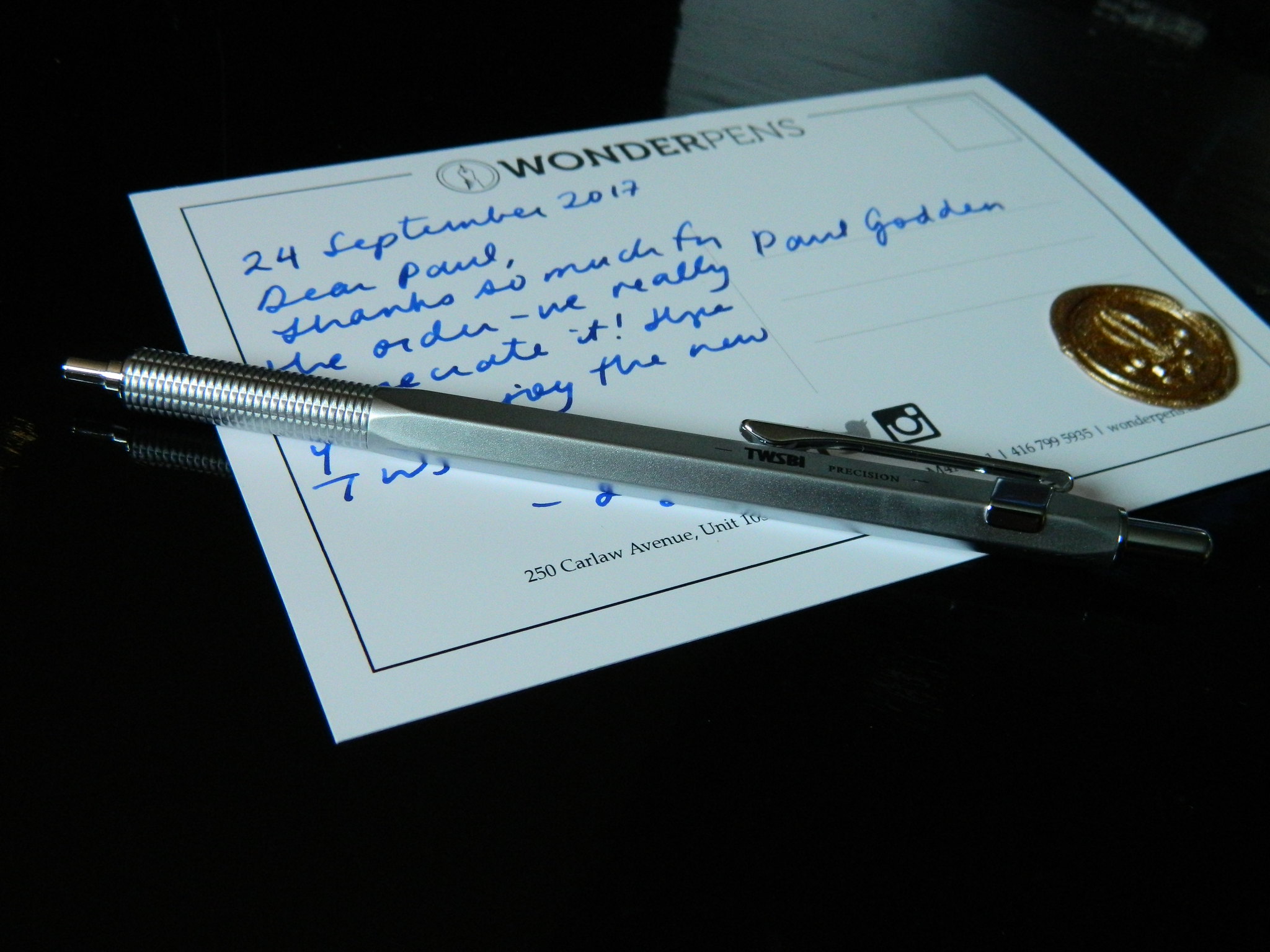 From the outset, the Precision feels like a well-engineered, high-quality product. The weight of the pen is well-distributed, and the hexagonal barrel is comfortable in the hand, and means that this pen is unlikely to just roll off your desk. 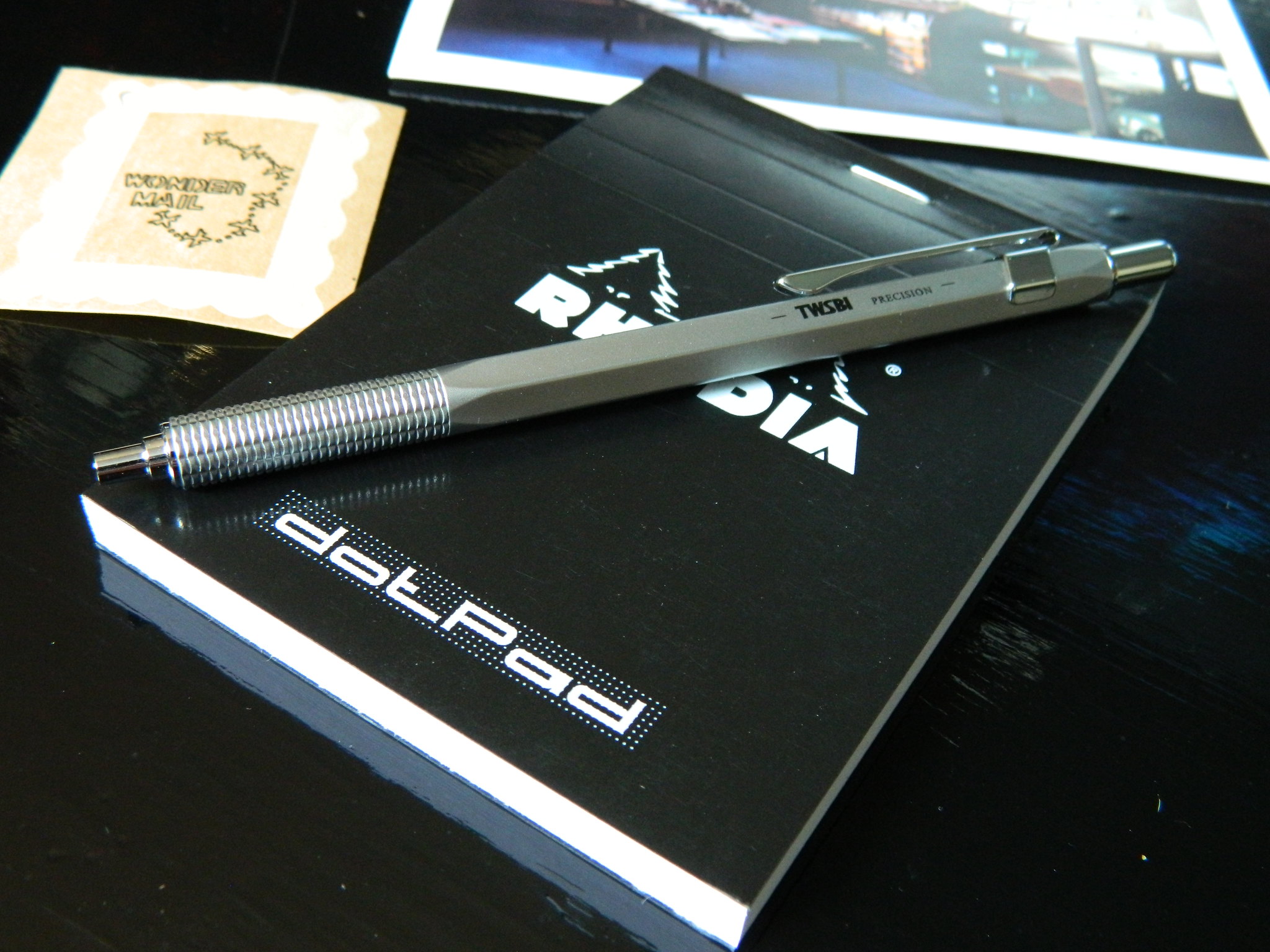 The cylindrical knurled grip is equally comfortable—not too pronounced, just right for extended periods of use. 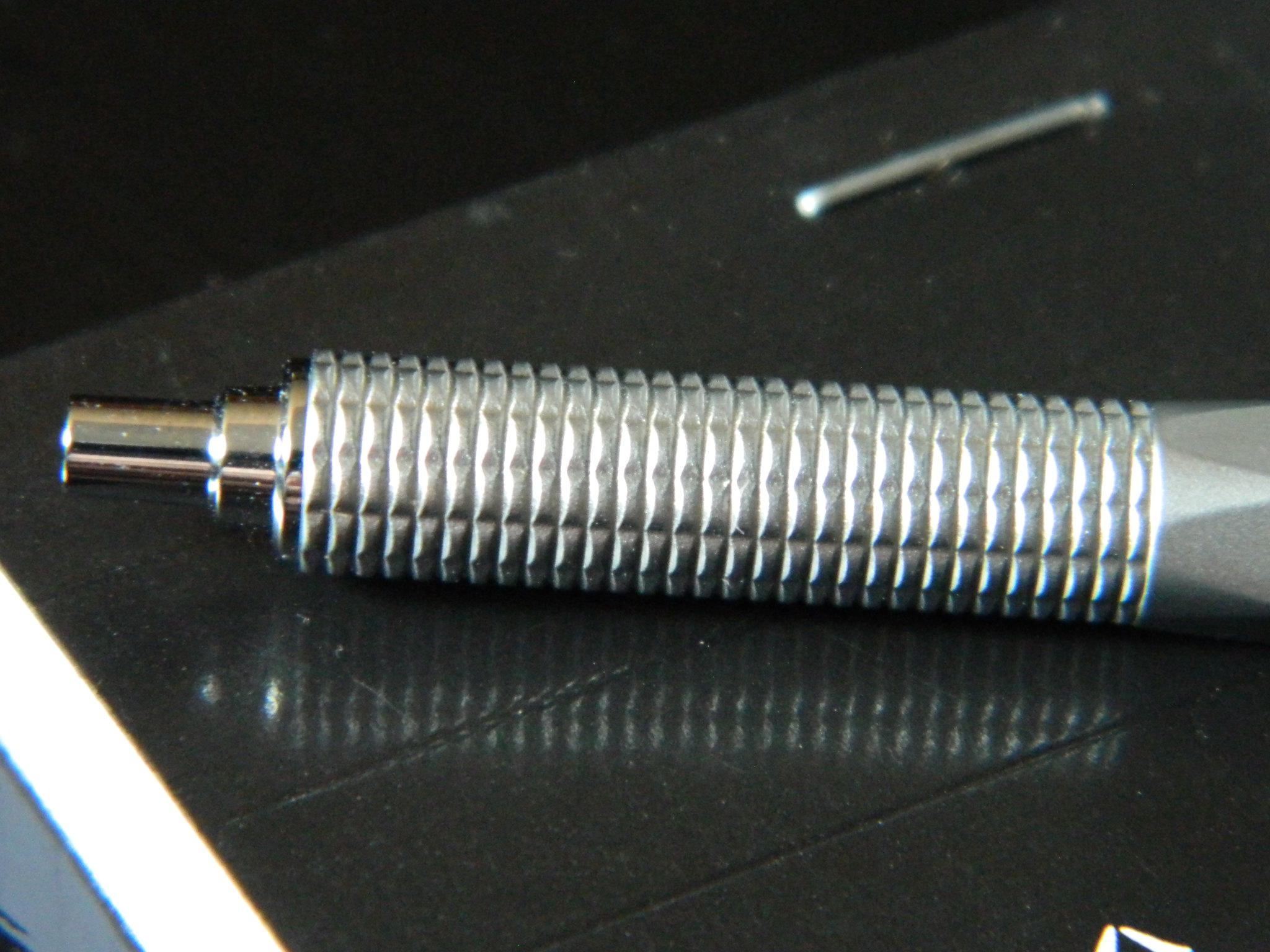 If I had one criticism at all of this combination of TWSBI pen, and Fisher refill, it’s that the refill has a slightly brassy finish near the nib, and this detracts slightly from the classy silver of the rest of the pen. But this is pretty minor really, and I only mention it because I can see it pretty clearly in the picture below… 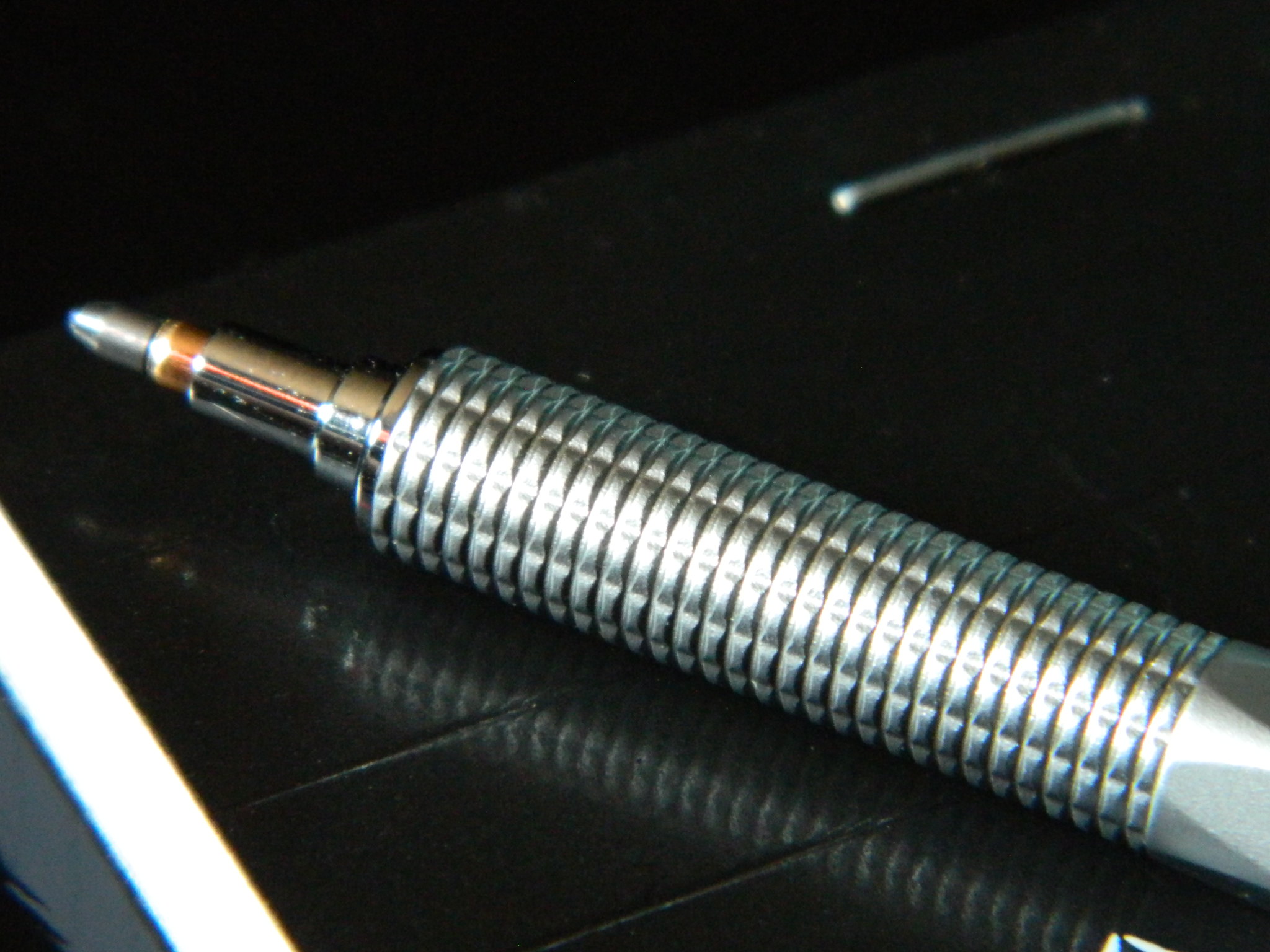 The barrel has the TWSBI name and model along one side, just adjacent to the clip. 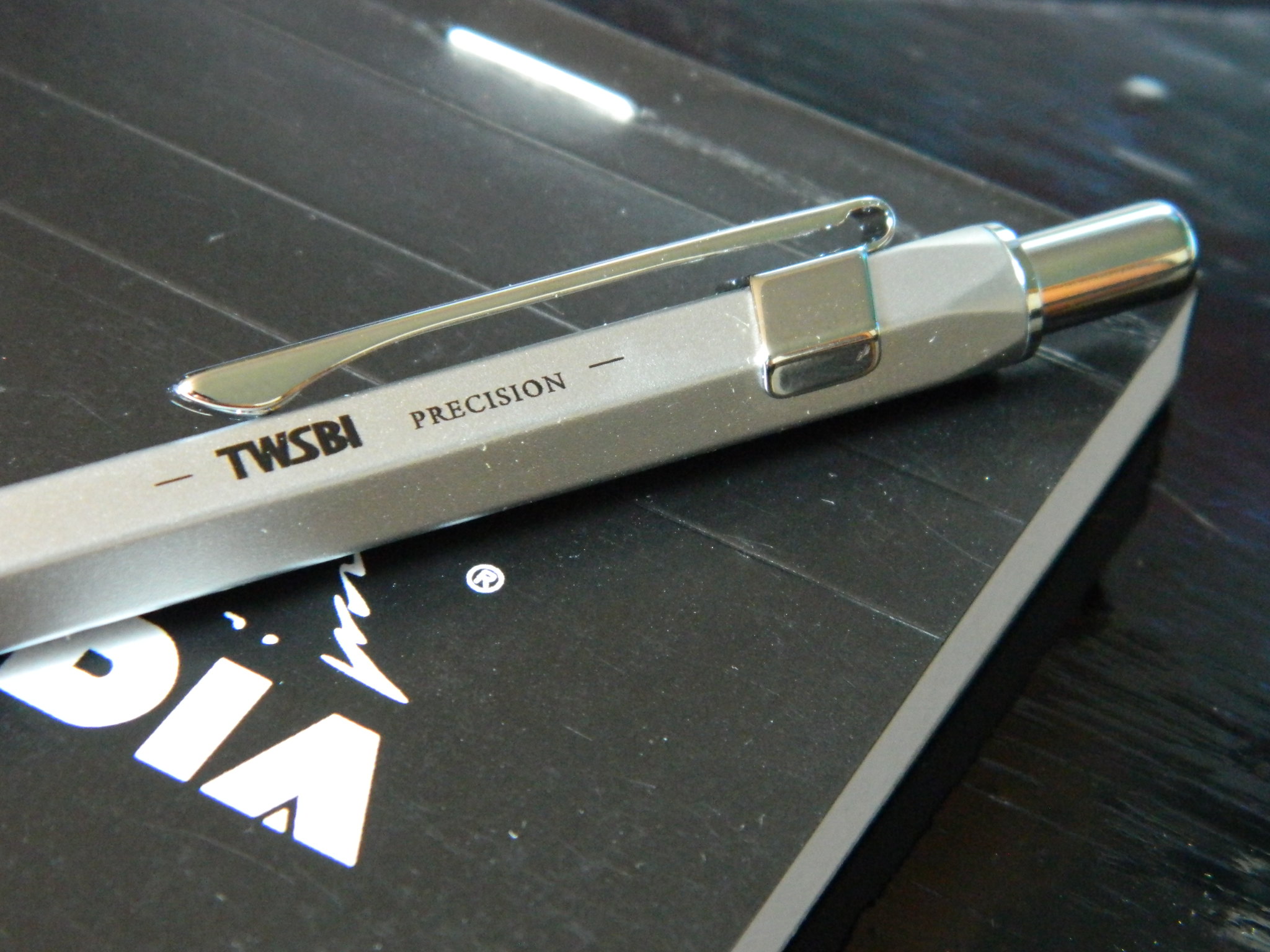 The clip also carries the TWSBI branding, etched in a stylish manner near the top… 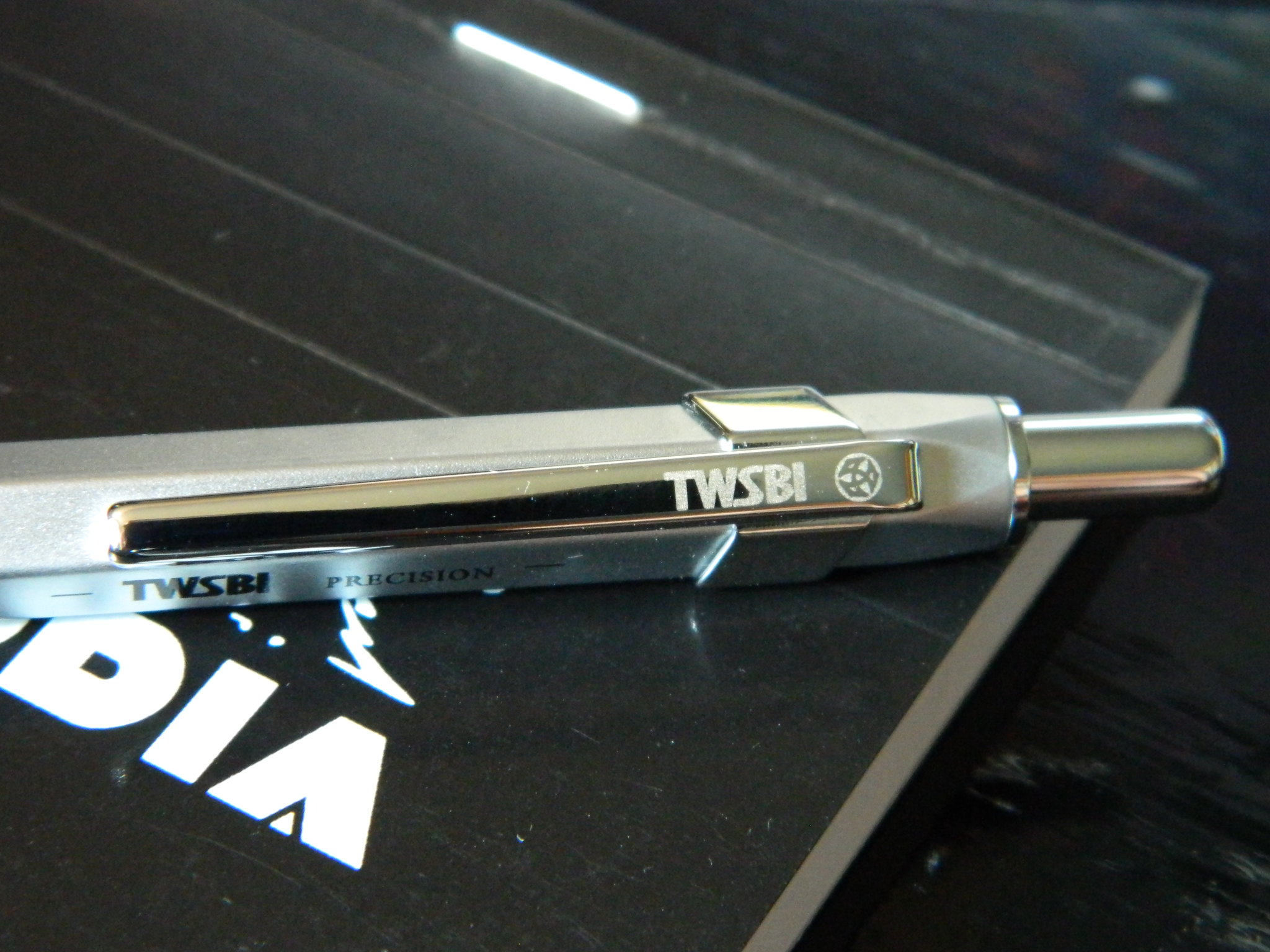 The clip is strong, without being too tight to use, and holds the pen firmly in a shirt or jacket pocket.

The knock extends and retracts the nib smoothly and reliably, with a satisfying click on each press. There’s no movement at all to the mechanism at any other time, no rattling in the top of the barrel, or moving when the pen is tilted: good engineering, and high manufacturing standards. 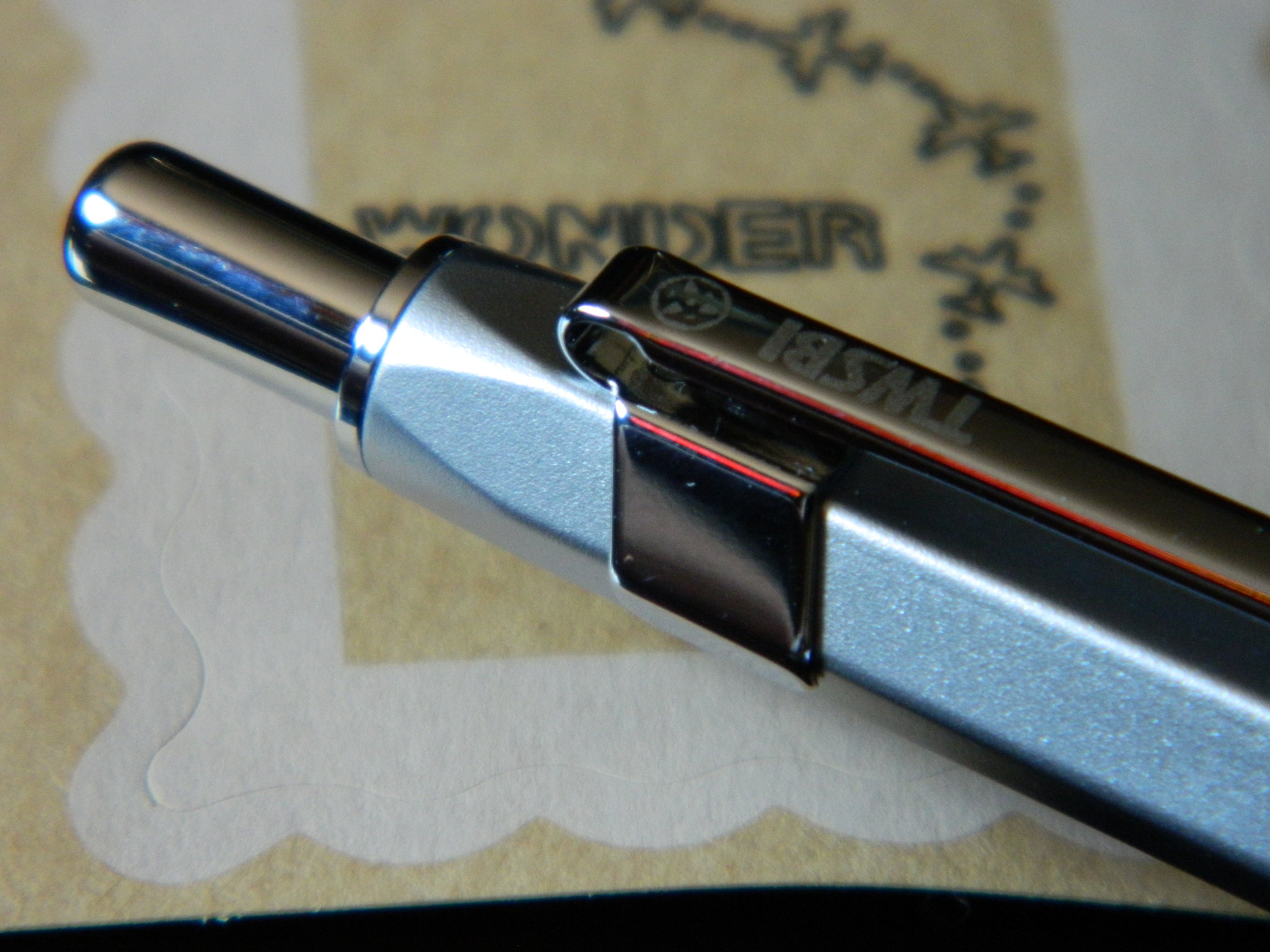 The pen accepted the Fisher Space Pen (Parker G2-styled) refill, with absolutely no issues whatsoever. But if you do this yourself, remember to use the supplied plastic adapter for a proper fit—and don’t throw it away with the packaging, so that you have to look through the wastepaper basket for a tiny plastic widget.

I didn’t do that of course. 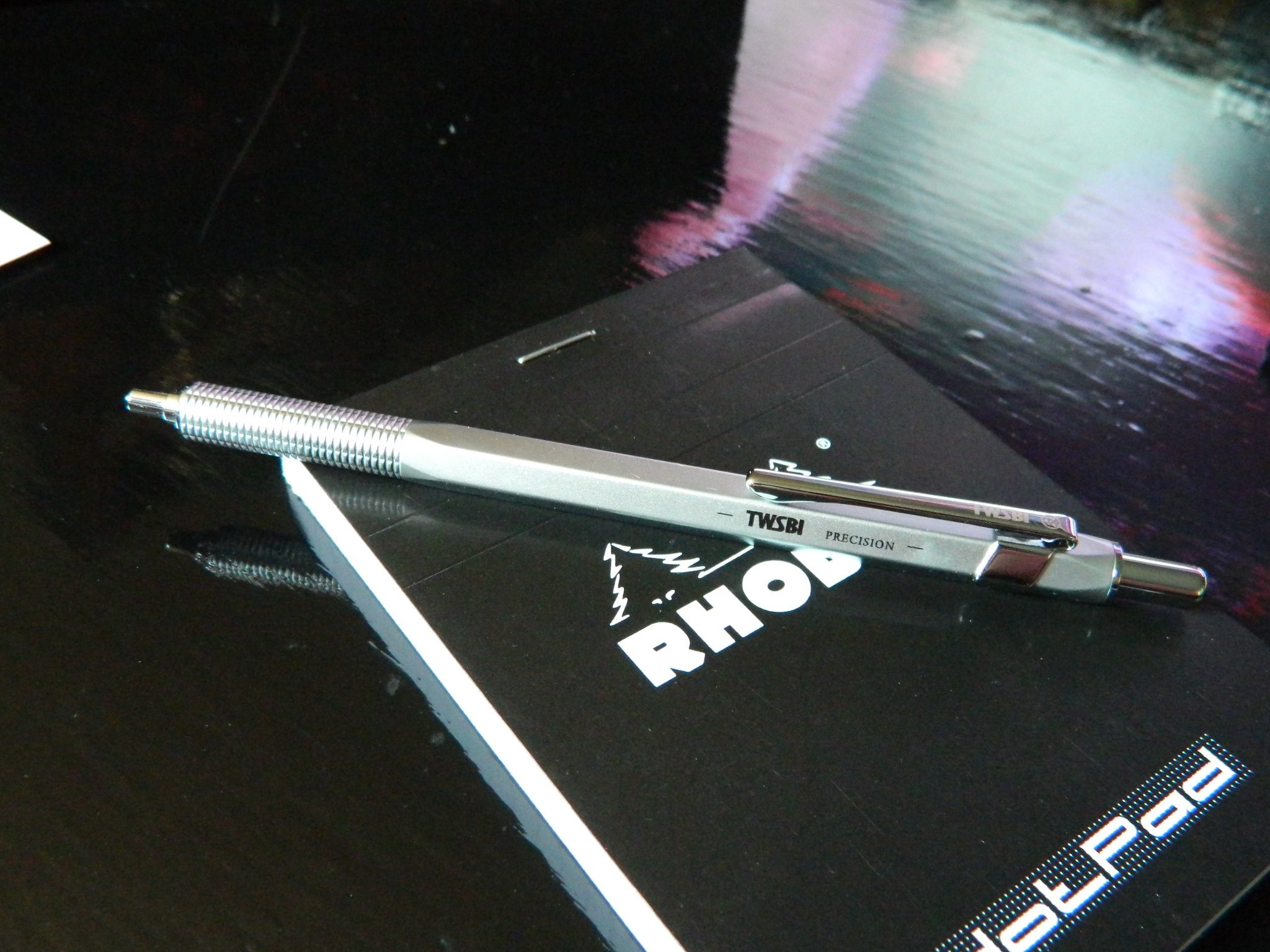 I tested my new purchases on the 80gsm, Rhodia Dotpad No. 12, with clean, white paper… 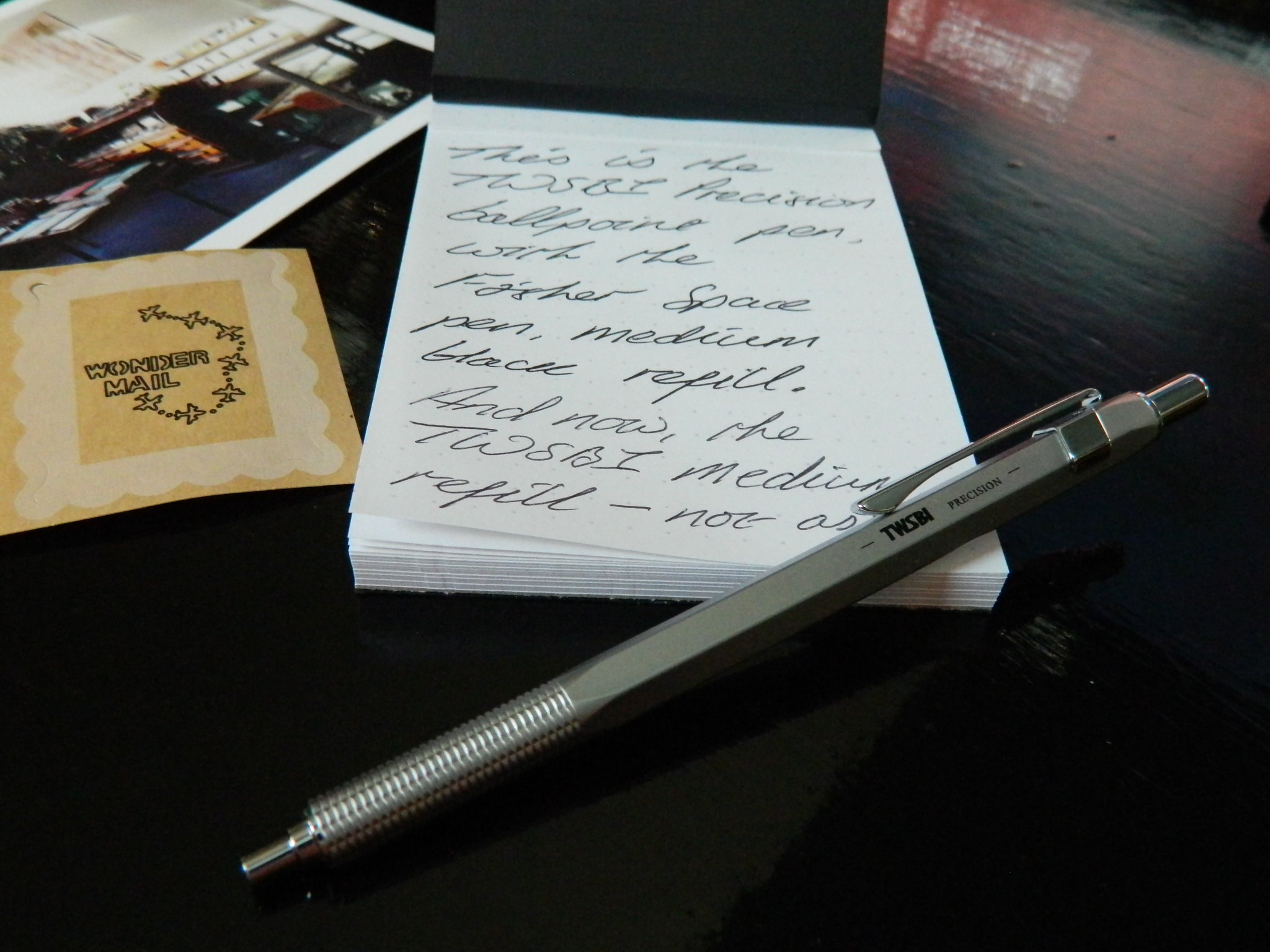 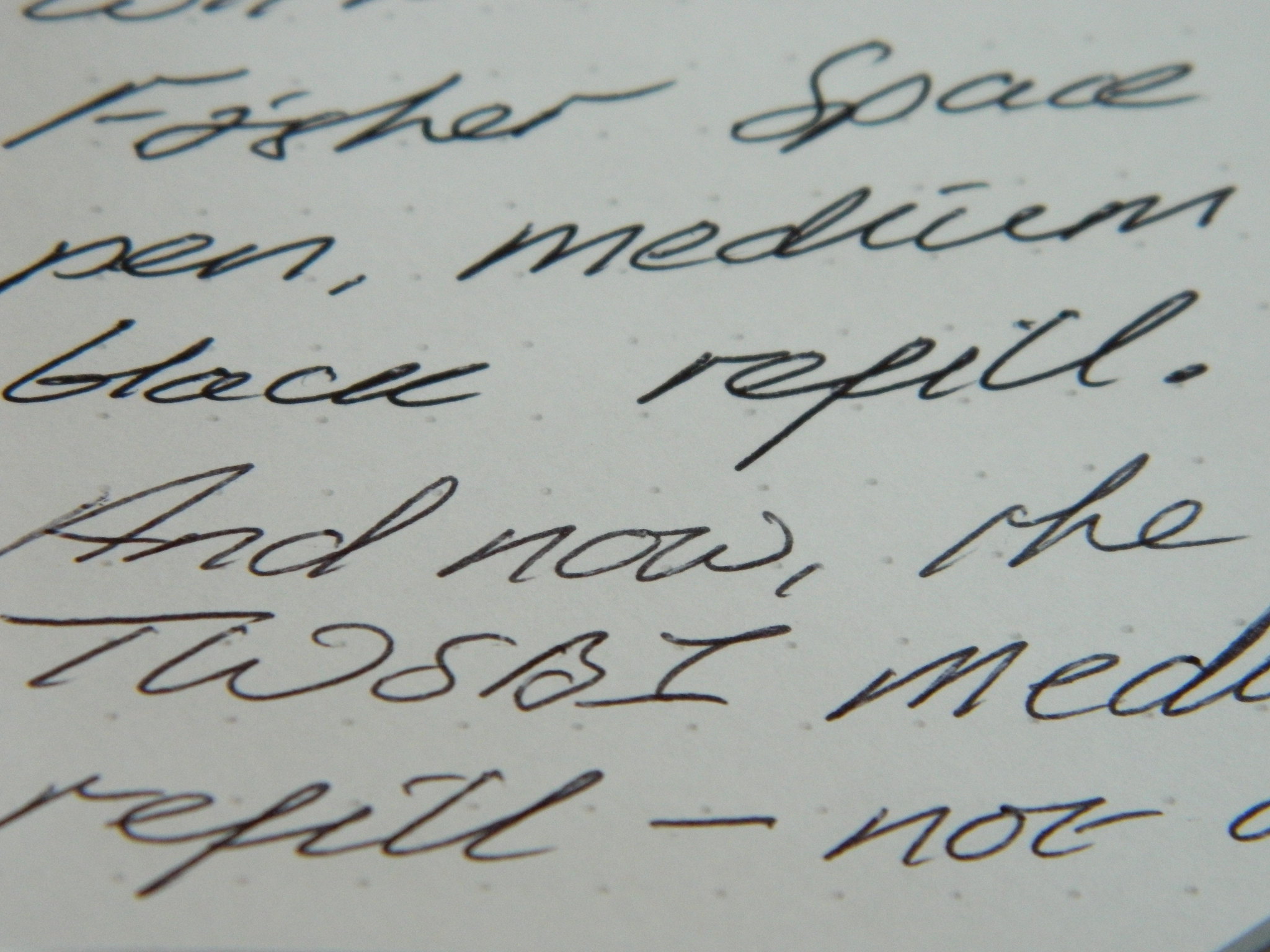 I didn’t like it much. The TWSBI medium refill was finer than the Space Pen, and noticeably rougher to use on the paper. It also didn’t much care for trying to write upside down. No, I was definitely glad to have bought the Space Pen refill with this pen. Even the richer, deeper black of the ink was more to my taste. The pen sat evenly weighted in my hand, and the combination of build-quality, and that refill, let the nib flow across the paper. I liked this combo a great deal. 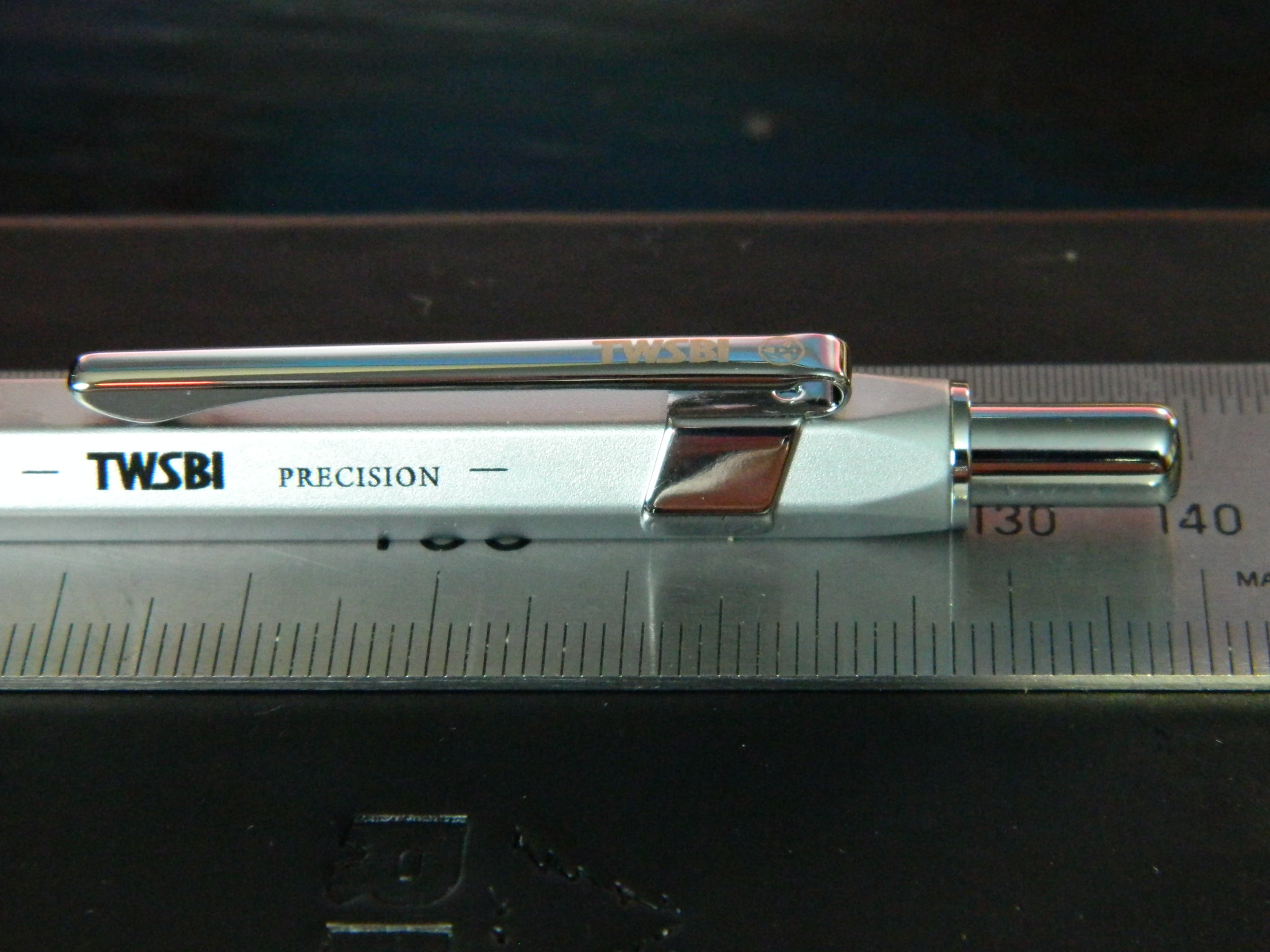 If we’re being precise here, I would also say that the pen doesn’t quite measure 140mm (with the nib retracted), and with the nib extended, it’s about 142mm—just saying. They got the diameter right though. 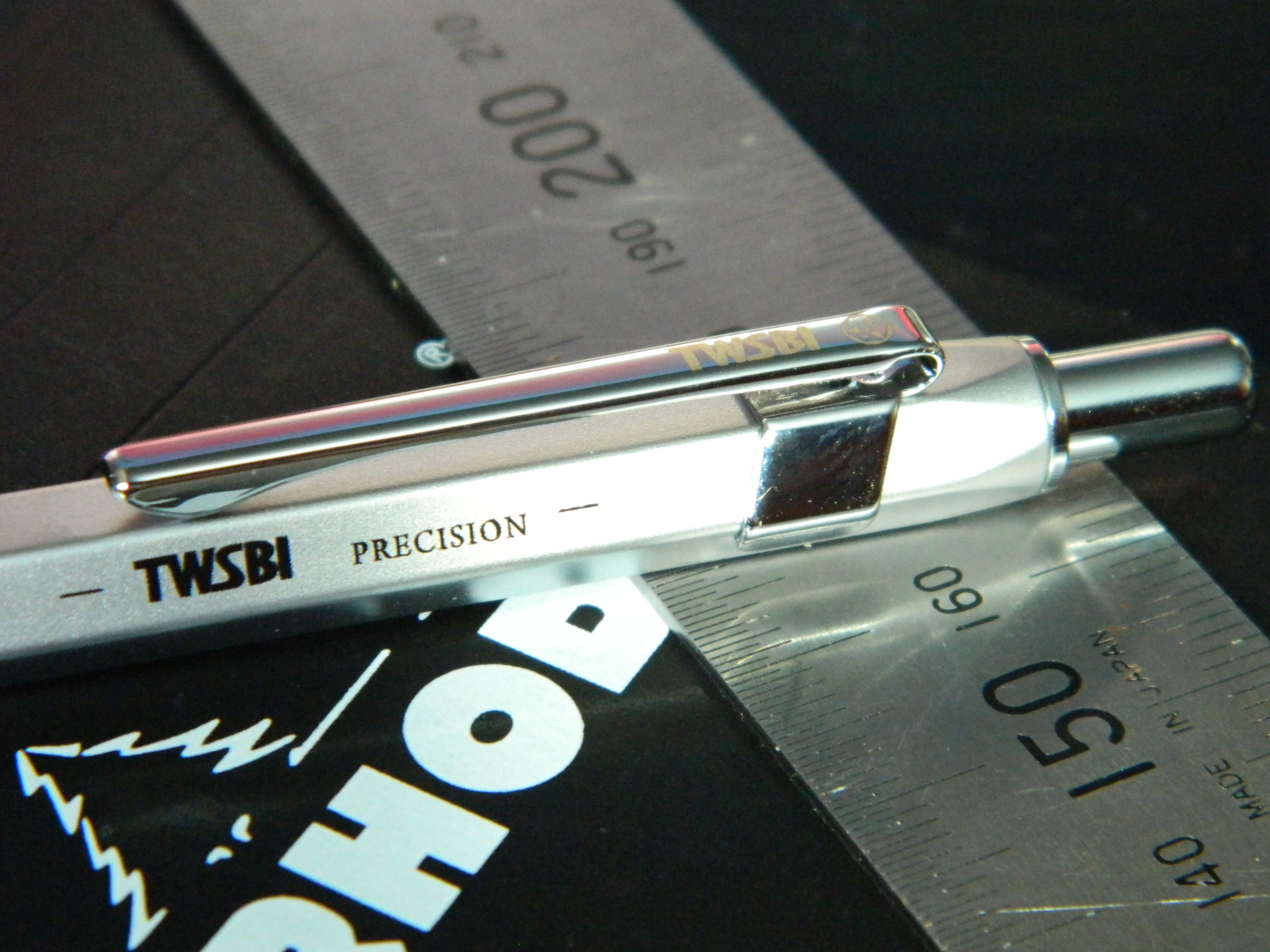 This is a nice ballpoint, and great value for money. It’s a direct competitor to the Caran d’Ache 849, and (in my opinion), beats it hands down for design, length, weight, and its ability to use the Parker G2-styled refills without even the hint of a problem. I should also make it clear that I don’t actually know if the Caran d’Ache 849 takes a Parker-style refill. But given that its usual refill is the Goliath, I have my doubts. If anybody knows for certain, please comment below!

Of course, the price of the Fisher refill pushes the overall cost to about $45.00 (Canadian), which is $10.00 more than the Caran D’Ache 849, but I think it’s more than worth the extra expense for what you get. In a few weeks, I’m going to be flying across the Atlantic to visit my family in England, for the first time in years, and whilst the fountain pens will remain un-inked during the flight, the TWSBI Precision will be the pen I use for filling out those customs forms before we land.