It’s been a while since I last posted, work on my dissertation took a 45 degree turn… a barrel-roll, and a double-back-flip. We’re back on track now, but there will be plenty more late nights ahead. Meanwhile, I look forward to doing the occasional blog post, just to keep me sane.

Strange how we judge sanity these days isn’t it?

I am saving up to buy my next really nice pen, that’ll probably happen on October 29th this year, at Scriptus, Toronto’s pen show. I might also have a nib worked on… I fancy my Sailor 1911L bold , as a medium cursive italic… we’ll see. But in the meantime, I like to experiment and look around. And that means keeping things affordable.

And you don’t get much more affordable than Jinhao’s range of fountain pens. In fact, in my humble opinion, they are so cheap, I have had my suspicions that the company just couldn’t make a profit on such a product.

My suspicions were given an informed, and articulate voice over at Pen Economics back in 2015:

Direct subsidies are the easiest to understand and generally go to upstream firms – not the pen manufacturers themselves, but the companies that provide the raw inputs like electricity or metal…

… subsidies push down the cost of their inputs and make it cheaper to produce pens, meaning they can be sold at a lower price and capture more of the market. If they had to pay the real costs of production, there’s no way these pens would be as cheap as they are.

Jinhao’s parent company is the Qiangu Stationery Co., Ltd. They’re a leading manufacturer which specializes in fountain pens, roller pens, ball pens, and mechanical pencils. Qiangu Stationey was established in 1988 in the Jiangxi Province of China. They relocated to Shanghai in 2003, and their exports to North America and the rest of the world have been steadily growing ever since.

Anyway, in search of an affordable new review pen, one that I could probably hand over to my 12-year-old daughter—because she appears to have caught the fountain pen bug from her father—my eyes alighted upon the Jinhao range over at the ever-helpful Wonder Pens. And some of them looked really quite nice.

Now, before we go any further, some Jinhao pens look pretty good, tasteful, and attractive; and the range over at Wonder pens are just that… but there are others… that, well, just aren’t.

Do a Google image search for Jinhao Cobra or Jinhao Chinese Dragon if you don’t believe me. I really don’t know how anybody can write with some of those things.

Jennifer over at Best Fountain Pen didn’t pull her punches, when she was reviewing the Jinhao Chinese Dragon:

This is HIDEOUS. Yep, I said it, hideous. I cannot imagine who would want to seriously use this thing.
Jennifer
Jinhao Chinese Dragon Fountain Pen Review
Best Fountain Pen

But anyway, after discovering that most of the Jinhao range at Wonder Pens wasn’t actually in stock. I eventually opted for the Jinhao 605, in glossy black, and shiny chrome (my description, not theirs), with a medium 18K gold plated nib.

Okay, let’s not fool ourselves here. My mother has a saying, “It’s real-rolled-gold-with-the-gold-rolled-off.” This pen costs (at the time of purchase) $13.50 before taxes or shipping (Canadian dollars that is). However much gold this pen has seen, I’m willing to bet it isn’t a great deal. But regardless, this pen is NOT hideous, it’s really rather nice… 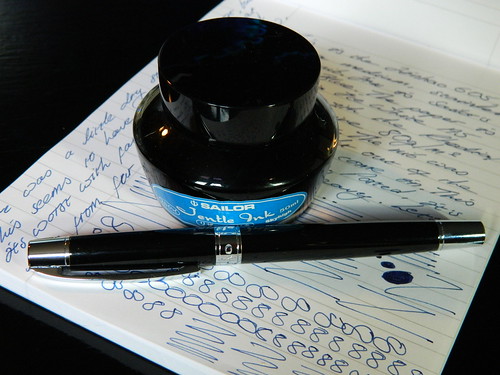 It’s a metal pen, and although it is by no means the largest in my collection, it is by far and away the heaviest… and you notice that the moment you pick it up. If your hands tire easily with heavy pens, you’ll probably want to look elsewhere. For me however, this isn’t an issue, and to be honest, the extra heft leaves me feeling an impression of good build quality.

I have nothing to substantiate that with however, just a feeling. 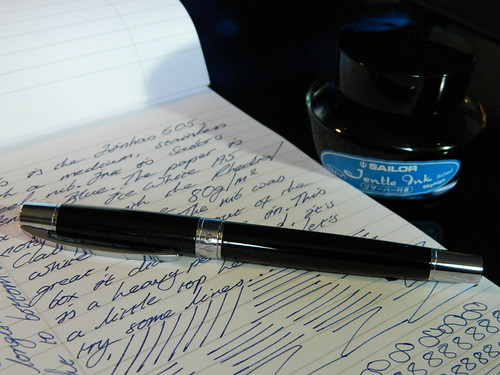 The metal body of the pen accounts for the weight. The blind cap at one end of the barrel, and the finial at the top of the cap are both chrome; as is the the clip, and the ring at the bottom of the cap. The ring bears the JINHAO name, and 605 tastefully etched around the circumference. 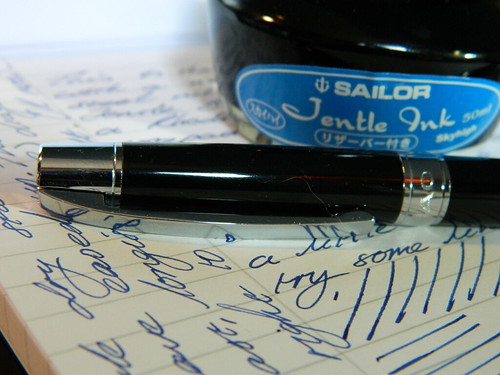 The cap and clip also make a rather interesting design feature. The pen, as I’ve mentioned is heavy, a rather chunky 38g (about 1.28oz), and needs a pretty tough clip. 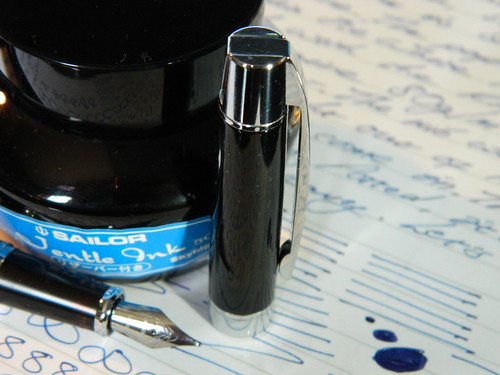 If you look carefully at the finial (on the top of the cap) in the picture above, you’ll notice how the clip hinges across the surface. In the next picture, you’ll see what happens when the clip is expanded… 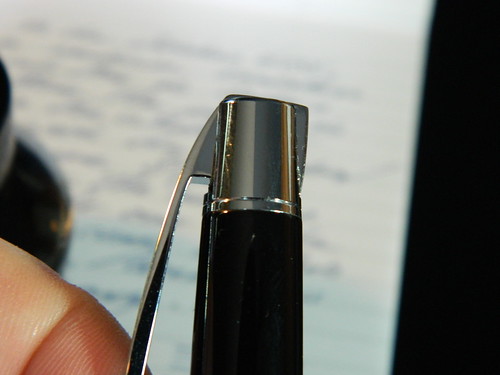 This design seems to lend itself to a clip with a substantial grip. Which is exactly what’s needed… I shot this pen across the bedroom one day, when taking my suit jacket off—you wouldn’t want this heavyweight in a shirt pocket—and the Jinhao wasn’t clipped inside, just loose. The pen flew across the room like a poorly-aimed missile, and hit a pine door, leaving a neat, circular indentation, just above the handle. I could only be thankful it didn’t hit a window. With the clip in use, only concerted shaking wrestles the pen free. So, you’re probably safe on all but the worst of the summer funfair rides.

So, we’ve heard about what it looks like, how heavy it is, even what kind of dent it leaves in the door of a pine wardrobe, but what does the Jinhao 605 write like? After a brief flush through with some tepid water, I put nib to paper. 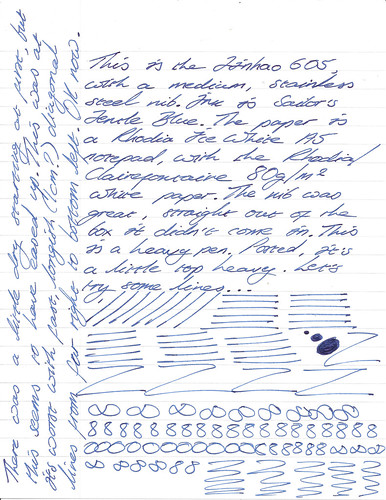 Writing samples have all been made using Sailor Jentle Blue ink, on a Rhodia Ice White A5, lined notepad, with their usual Clairefontaine 80gsm, white paper. 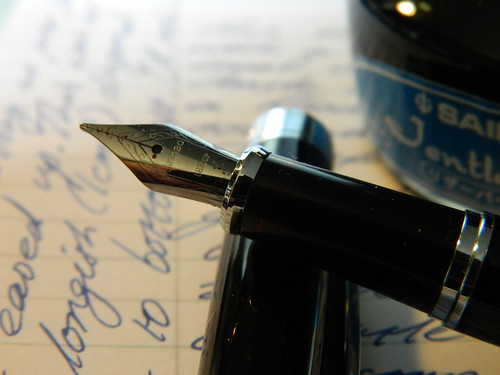 The nib was great. No adjustments needed, it inked up and just worked, smoothly and easily from the moment it hit the paper. Despite being thrown across the bedroom.

It’s not a heavy, or very wet, medium line. In fact, I think it compares to some fines I’ve used, but it’s also comparable to my Platinums, so I’ll leave it there… a medium it probably is.

It does nothing for my handwriting, so the Jinhao loses points for being unable to work miracles. 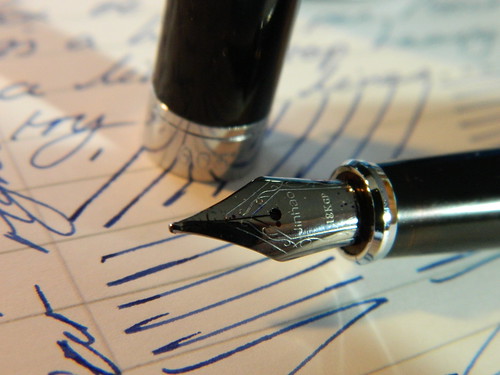 No hard starts, beyond a little hesitancy when it was first inked, but I can forgive that.

Despite being heavy, the Jinhao 605 is not a big pen. At 116mm (4.57in) uncapped and unposted, it is actually the shortest pen I own; and even posted, it’s not as long as the Platinums, the Sailor, or the TWSBIs.

But it is the heaviest…

The cartridge and converter are the standard international type, and the pen comes with a converter. This in itself is quite a boon at this price point, since most converters are at least $10 Canadian, after you’ve bought the pen. 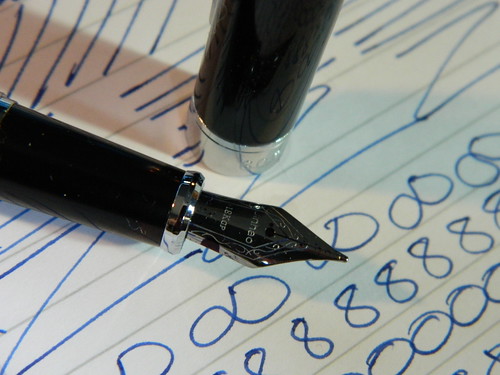 I Heard it Through the Grapevine…

One last thing: I have talked with owners of other Jinhao pens—pens with metal bodies and colored finishes—that have questioned the build quality and finish of these pens. I haven’t had this pen for very long, so cannot speak to how accurate these criticisms might be; and I suspect that, as with many economically-minded products, there may well be some veracity to them. All I can say is that, I won’t be getting rid of this pen. My daughter, a far tougher field tester for pen durability than I, will be running some extended evaluation: watch this space.

This is a nice pen… not thrilling, but nice. It writes well, it’s a bit heavy, but it looks good, and feels well-built. It comes with a converter that would ordinarily cost almost as much as the pen, and it writes as well, or better, than pens ten times—or more—in price. 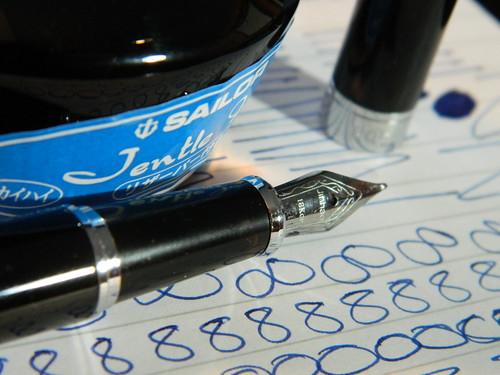 So why aren’t I singing Händel’s Hallelujah Chorus, and announcing the second coming? Well, firstly I’m an atheist, and secondly, as good as it is—and for the money, it’s great—it just aint up there with Georg Friedrich’s Messiah… or even Stevie Ray Vaughn’s Texas Flood for that matter.

There’s just something about it that means I don’t look for excuses to write with it… the way I do my Platinums, my TWSBI Diamond 580AL, or my Edison Collier. Granted, they’re between five and twenty times the price… and maybe that’s it… maybe I’ve been conditioned to think quality = cost, and vice versa. Whatever the case may be, the Jinhao 605 is a good pen, excellent value for money, and I’m sure anybody looking for a good, solid, fountain pen, for very little cash, would be far more excited with one of these than I have been.