Thank you to Wonder Pens of Toronto for a quick and efficient delivery yet again. I just can’t fault these guys, and my collection of Thank You postcards from Liz is growing by the week. So what was in the parcel?

If you’ve already seen that I have a new toy, then you’ll know it was a TWSBI. Their packaging is just how I like it—it matches the product. It has a clean, modern look (not the cardboard box, wait for it), it’s not too fussy, not too flashy, and there’s not too much of it. The info’ sticker on one end of the box tells me that the order is right; and I’m looking forward to opening it up. 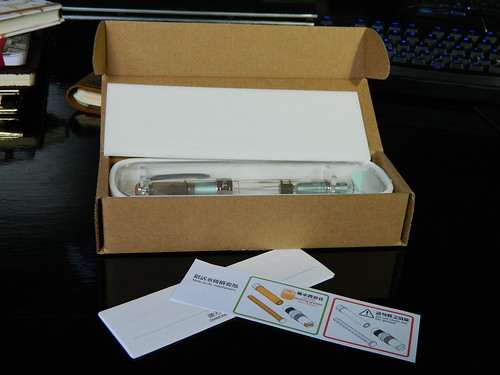 The coffin fits snugly inside the box, and is padded with a couple of sheets of quite dense foam. They’re pretty good really, I’m thinking of cutting them into shape and sticking them into the pen jar on my desk. They might stop some of the small marks the jar leaves on the pen barrels.

You also get the usual TWSBI instruction leaflets on care, cleaning, and refilling. But to be honest, you’d be better off watching some of Goulet Pens’ excellent YouTube videos instead of reading the leaflets. Or do both, that’s safe isn’t it? 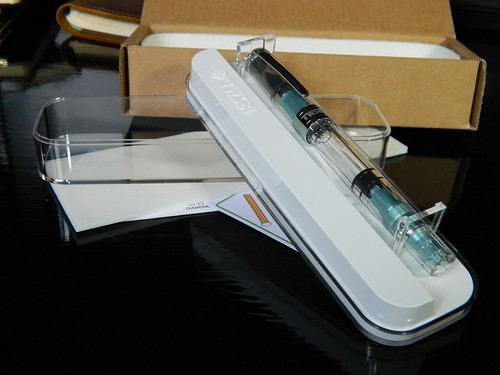 The packaging for TWSBI’s Diamond 580AL (for aluminium; or for anybody reading in the U.S., that’s aluminum—it took me ages before I realized al-looo-min-um, was actually what we Brit’s call al-loo-min-eee-yum), is less economical than for it’s Eco brethren. Which is hardly surprising, it’s a more expensive pen, and the materials used make it ever so slightly heavier (see Details below). 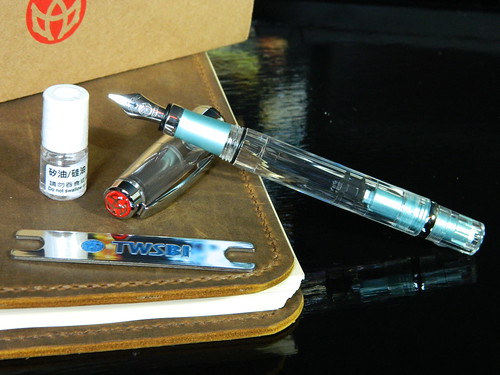 Also in the box, as is usual with TWSBI’s pens, is the little wrench for taking the pen apart to clean it, and the small vial of (rather runny) silicone grease. It took a little searching to find them, and I can imagine some uninitiated folks throwing out their tools and grease, because they didn’t locate the hiding place in the packaging.

I’m not going to to tell you where they are, you’re just going to have to look… but they are there.

Straight out of the box, the TWSBI Diamond 580AL looks… well.. OK I suppose. If you like demonstrator pens. I’m beginning to come around to this design, but I’m still not that keen. Also, I ordered the turquoise, which I’m not a great fan of, but I wanted something kind of color-independent of the inks I use. Also, I wanted one pre-fitted with TWSBI’s 1.1mm stub nib, and that left turquoise. 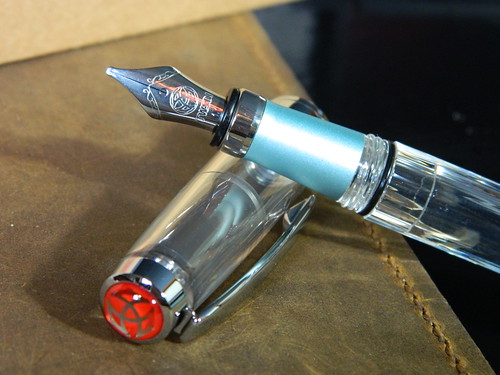 It’s certainly more aesthetically pleasing than the Eco. The 580AL comes with a rounded cap, as opposed to the angled edges of the Eco’s hexagonal (six-sided) top. The internal parts of the filling nob, mechanism and piston, are all colored aluminium, and as a result, feel a great deal more sturdy and reliable than the Eco. Whether they actually are or not, remains to be seen over time.

Regardless of all that, the Diamond 580AL  certainly feels like it’s better quality. The section also has a turquoise, aluminium band, and the whole thing looks like a superior product to the Eco. 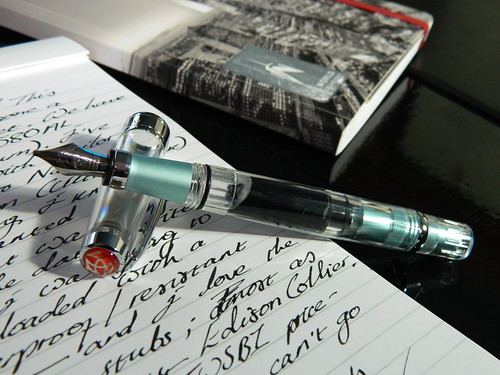 And this is precisely what I wanted when I ordered the pen. I liked the TWSBI Eco’s—as functional pens, if not for their looks, or the filling mechanism—but I wanted something sturdier, that looked a little classier, and improved on the build quality of their filling mechanism. Check, check, and check again. The Diamond 580AL is all those things. But what does it write like? Well, it’s all in the nib:

One of the best fountain pen values on the market. The steel nibs on the 580 are firm, fine, and smooth. I generally go for the EF nib, which is what you see in the writing samples here. In the non-Japanese category, these are some of my favorite nibs. I don’t recall ever having an issue with any of my many TWSBI’s when writing.
Brad Dowdy, December 4, 2015
The Pen Addict
TWSBI Diamond 580AL Blue Fountain Pen Review

If you’ve read any of my other reviews on this site, then you’ll probably know by now that I enjoy writing with a stub nib, and the line variation that gives in my handwriting. The 580AL is no exception, and the nib was great, exactly what I have come to expect from TWSBI’s pens. 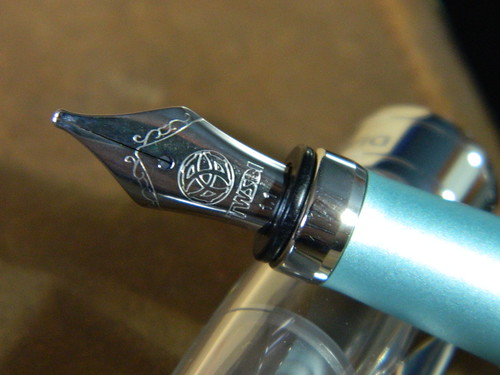 After a quick flush out with clean water, the filling mechanism operated flawlessly. I finally put nib to paper, using Sailor’s Kiwa-Guro (Ultra Black) Nano, carbon ink. Boring I know, but it’s why I bought the pen. 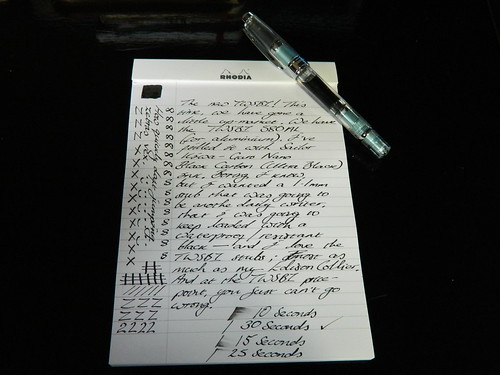 The writing samples have been made on Rhodia/Clairefontaine 80gsm, white paper, and there were no hard starts or anything other than a smooth writing experience. This is a scan of the writing sample above, for a close-up of the pen’s performance on paper… 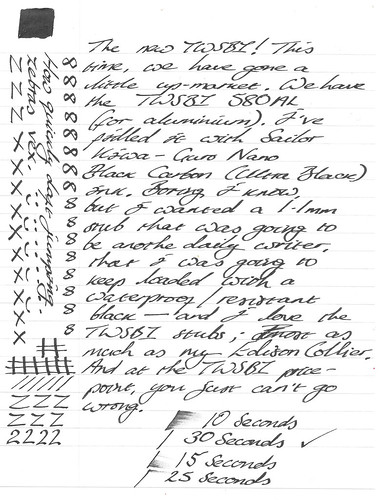 You’ll notice that the 25 -second ink sample wasn’t quite dry, but the 30 -second one had dried. Well, to be honest, I think that was kind of my fault. I paused with the nib of the pen at the top of that 25-second line, before making the downward stroke. So I think that point where the ink hadn’t quite dried, had a bit more ink on it than the rest of the line. Sorry, I’ll try and do better next time. 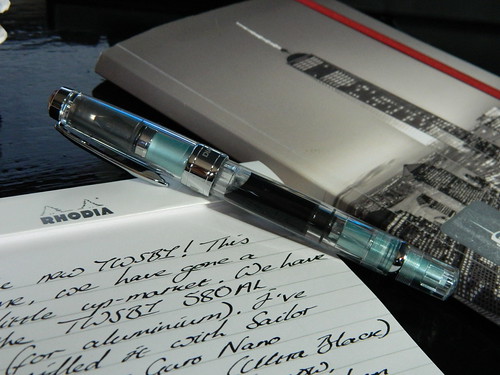 There was no observable feathering of the ink, or bleedthrough, despite the pen laying down a generous line. 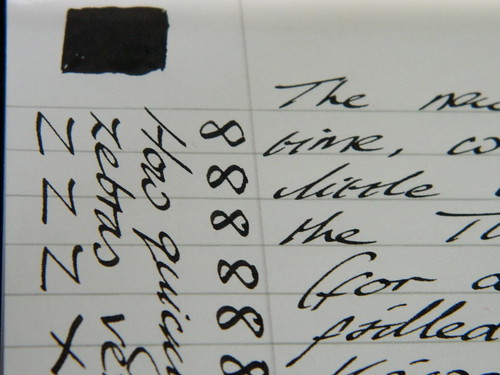 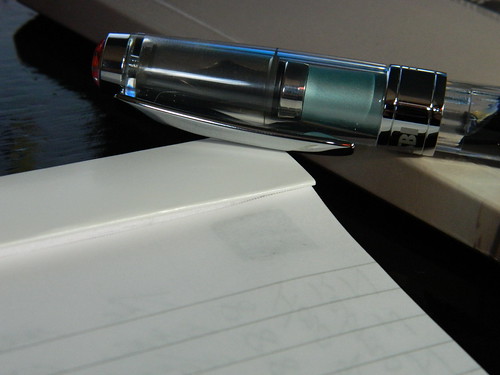 As you can see from the graphics above, the ink is visible on the reverse of the sheets, but still leaves them entirely usable. And writing with this pen is just as enjoyable as using pens many times its price.

I thought it might be worth comparing the specifications for the Eco and the Diamond together. They’re a very similar couple of pens, but the differences make two very distinct products.

The Eco, is just fractionally shorter when uncapped, but I have to say, I would never notice that in use. Both pens are extremely comfortable to write with, and the 580AL a bit more so than the Eco. The diameter of the 580AL is also just a little greater than that of the Eco, which results in a slightly greater ink capacity. The Diamond 580AL is also, unsurprisingly given its materials, about 11g (0.37oz) heavier than the Eco; which actually feels more comfortable for me. And I find it instills a reassuring feeling of quality. When I was a kid, my mother always used to say, “If it’s heavy, put it down. It’s expensive.”

You can post this pen, but like the Eco, it feels a little ungainly with the cap stuck on the back.

The TWSBI Diamond 580AL is a big upgrade from its (half-the-cost) sibling. Its build quality is immediately, and noticeably, superior. It looks nicer (but it’s still a demonstrator); that fiddly filling mechanism seems a lot sturdier; and it feels more comfortable in the hand. Not least because it’s a slightly heftier pen.

It is however (at the time of posting this review), more than twice the price (with another five bucks Canadian added on, if you want the 1.1mm stub nib). I can’t tell you if it’s a big upgrade over the previous Diamond 580 model, because I’ve never used one. But the TWSBI web site states that the 580AL contains upgraded components, as a result of user feedback.

So what more is there to say? At this price point, you could also choose the Platinum Balance (about ten bucks cheaper), but that’s only available with fine or medium nibs. And of course, there are a whole host of options that I haven’t reviewed on this site… yet. Personally, given that the 1.1mm stub nib was one of the main reasons that I made this purchase, I think that TWSBI stand in a class of their own with this pen, especially at this price point. The only better pen I have with a stub nib in my collection, is my Edison Collier, at about three times the price of the TWSBI (but it sure is a nice pen… and it’s not a demonstrator).